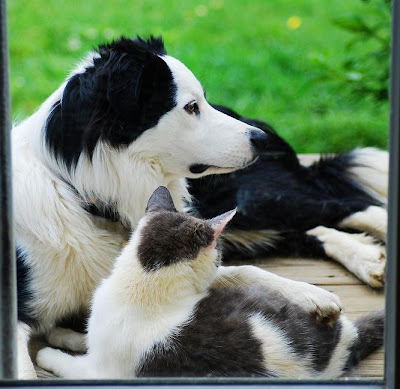 As I sat in my living room yesterday evening, working on the meme post (see below), this is what I was seeing through the glass of my sliding door. My camera happened to be right by my side, so I picked it up and got a few quick shots before this little scene ended. I've mentioned before that George loves this cat. They're best friends. This is SC, otherwise known in these parts as Stray Cat. I see SC everywhere: hunting down at the pond, in the woods taking a stroll, climbing trees, or by the mudroom door where I feed the two stray cats that hang around. But I have still not been able to get close enough to see if she's a he or he's a she, because the only person she (he) allows to get this close is the black & white. 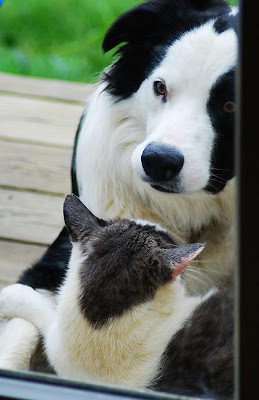 That's what my husband calls George sometimes. "Look at what the black & white did today", he'll occasionally say when I get home from work. It's usually nothing, like a toy that's been chewed to death. But sometimes, he takes something from the coffee table outside, like a magazine. And he has a little chew on the edges. Occasionally he takes one of my shoes, the Dansko ones I've had for years. So he's not an angel. And when I leave for work in the morning, the last thing I do is check the living room to make sure nothing is available for George, and I always leave my Dansko's there, because they're, well they're old and I don't care. I've just come in from feeding the strays and SC let me get close enough to pull a tick off her (his) ear. But she wasn't lettting me get any closer. Next weekend, my friend Kathy is coming out, and maybe she can get close enough. She's employed at an animal hospital and she's really good with dogs and cats. Tracey may come, too. And we're trying to get Lynn to as well, but she's always so busy. When I mentioned that I wanted to have a campfire and maybe even set up the tents in the backyard, these three said it sounded like fun. You see, I had originally planned on having Karen and her daughter, Adrienne, but they can't make it next weekend. My husband thinks we're crazy for setting up tents in the backyard, but I'm ok with that. He's always telling me I'm crazy. Perhaps it's a good thing he doesn't read this blog . . .

That's an incredible pup you have there.. making friends with stray cats is so touching and sweet.

I love how they match each other. SC's ear does look a little ouchy - hope you guys can check him/her out more. We get a lot of strays here because we live at the edge of my in laws' farm and people [read: idiots] drop them off all the time.

...What a wonderful photo! You have a special dog there Kate... :o)

...I have a cat that looks like SC but only a lil' bigger. He was a stray that I picked up off of the middle of the highway when he was a kitten (and I do mean in the middle, he was sitting on a white stripe that divides the lanes). He's only my cat - he's very shy and skittish with neighbors and guests. Long ago I would've thought "oh he's a wild cat" but in reality he's a lover but only to one person... ;o)

...Sorry for the long comment but this photo really touched my heart...

...Thanks for sharing and give George a pat on the head for me! BTW, love the tent idea... :o)

oh, I love these! I wouldn't mind being George's best friends...

Hm, not sure about the tent thing. But a weekend with friends sure sounds like fun!

And I don't think you are nuts for setting up tents. I'd help ya if I was there! ;)

How sweet. There is a SC in our neighborhood too, but my dog Smokey hates it. Your George is quite a guy.

Ummm. I don't do tents, but I am available....Trying to figure out how to do the AT in a motel every night...any suggestions?

Camping in the back yard is the best kind of camping. If you forget anything, you don't have to go far to fix the problem. lol I don't think you're crazy at all! What fun to have a girls camp out!!
What a dog George is! My dog Ramsey used to sleep with our duck.(But he won't be nice to the chickens.) I amazed to this day the kind of friendships that these animals come up with.
P.S. the meme is on my site now.

Yes, SC and "the black & white" look like they belong together.

I really like your new header!! The goslings are precious!

I want to steal your puppy! My border collie has been gone now for 3 years. Miss her! I think they have the most expressive eyes!

That is the sweetest thing. I also think tents in the back yard are so fun. I love to set them up and sleep in them with my grandchildren. We have a lot of fun and very little sleep. I bet it better with friends.