I’ve just finished reading a charming book and wanted to share some of my thoughts with you. I was approached a few weeks ago by a representative from G.P. Putnam’s Sons who wanted to know if I would review a book on my blog. The selection arrived shortly before my scheduled road trip and I knew I’d have plenty of time during that long drive to read it. 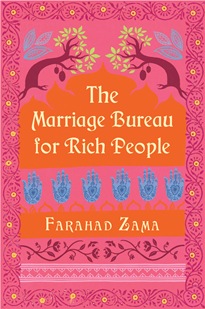 The Marriage Bureau for Rich People is a tale that takes place in India, and although I’ve never been particularly interested in that country, I enjoyed learning about the culture through the pages of this interesting read.

Mr. Ali is recently retired and has been looking for something to keep him busy and his mind occupied. He and his wife live in a comfortable home in a city in Southern India and it’s his idea to start a marriage bureau. The caste system in India is still prevalent and most people don’t marry for love, although love often comes later as it did with Mr. Ali and his wife. Marriages are arranged by another member of the family and many prerequisites must be met before a meeting takes place between the potential bride and groom. Mr. Ali’s bureau turns out to be quite popular. He possesses much common sense, but not enough to know that the fledgling business is consuming every waking moment of his time. It’s his wife who finally suggests taking it easy and hiring someone to help him.

A local girl named Aruna enters the picture as his assistant and as the business grows, so does my fondness for the key characters that Farahad Zama so wonderfully describes. I was especially taken with Aruna whose love and respect for her family very nearly destroys the promise of happiness for herself. The character of Mrs. Ali, whose role in life is that of her husband’s wife, runs the household with the help of a maid who’s going through a bit of a rough time. Mrs. Ali is a sensible and strong woman who would never go against her husband’s wishes, but there are other ways of getting around certain situations. I was extremely taken with her cleverness.

The Ali’s have a son who has become estranged from them because he’s gone against his father’s wishes. In India, you do not disrespect your elders, but sometimes it’s necessary for the benefit of others. Rehman is a freedom fighter and is protesting a major company who has decided to build on land owned by farmers and I found this side plot very enlightening.

The writer’s colorful descriptions of the relationships between the people in this book have earned him the UK’s Melissa Nathan award for comedy romance, and he is the first man to have ever taken this honor.

I found his writing just a tad unsophisticated but perhaps only because it was compared to Alexander McCall Smith for style. I think that over time, Mr. Zama, who wrote the book on a train while traveling to work, will grow into a wonderful writer. And he’s certainly on the right track (get it) with this prestigious award for his first book.

Good review! I will have to read this as I am now intrigued by the characters.

A comprehensive review...kind, yet direct.

A well-done review, I'd say. Good work, Country Girl. You now have another hat to wear!!

I am a compulsive reader! I cannot pass up any kind of bookstore; new or used.
I love your review. Look forward to reading this!

Great review Kate - putting this one on my list!

Good review .. well written and you've explained the plot w/o revealing too much that might take away from the pleasure of reading it.

Bring it with you to Blogfest ...

Interesting that you mention Alexander McCall Smith because that's what the plot was reminding me of! I'm glad to have a recommendation for a good read.

How much fun..and how exciting to have a book sent to you for a review! I love the review and it sounds like a fun book to read...would you compare it to McCall-Smith's writing?

Will put this on my reading list as I love books on India.

Thanks for the review! I'll be adding this one to my list.

Enjoyed this review. I think this book would make a good film. Arranged marriages are often the subject of debates and with a good cast it would work.

I think you have a new calling, Kate! Your review makes me want to read the book. Success!

I enjoyed your review and am now interested in this book. I am going to share your review with my sister who owns a bookstore. Aren't I lucky?? A bookstore in my family!!! I love it.

This book is on my list. Reading your review made me think of the movie "Monsoon Wedding," which I enjoyed. You might try it out!