A couple of Sundays ago, I caught a news piece on one of my favorite shows, CBS Sunday Morning. In it, they were reporting on a display of birdhouses created by former architect, Tom Burke. The display of 21 homes for the birds can be found along the Riverwalk in Wilmington, DE, the city where Mr. Burke resides. The path runs along the Christina River and because of the show, I made plans to go the following weekend when my friend, Reena, was coming to visit me.

We met at my house, then drove the short distance to Wilmington’s riverfront and had a fabulous lunch at Harry’s Seafood Grill before picking up the path that runs right in front of the restaurant. 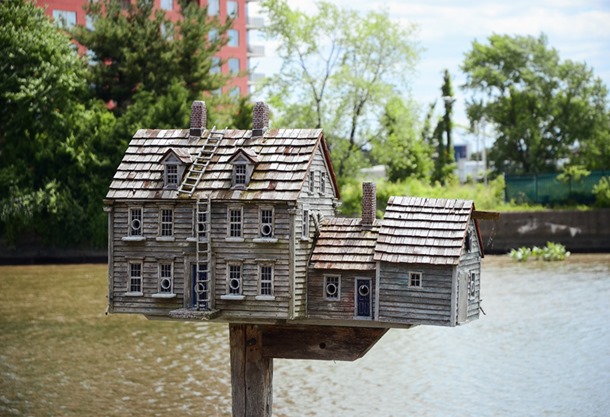 We saw the first birdhouse right next to the restaurant. Several of the birdhouses depict the homes in paintings by Andrew Wyeth. The one above is a replica of the Olson Farm, made famous in Andrew Wyeth’s 1948 painting, Christina’s World. 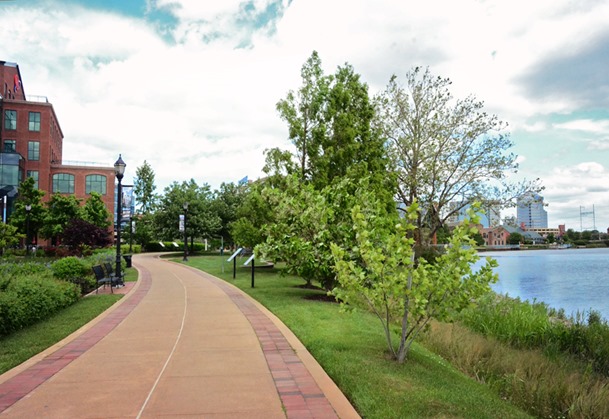 Although it was unseasonably chilly, it was a beautiful day for a stroll. 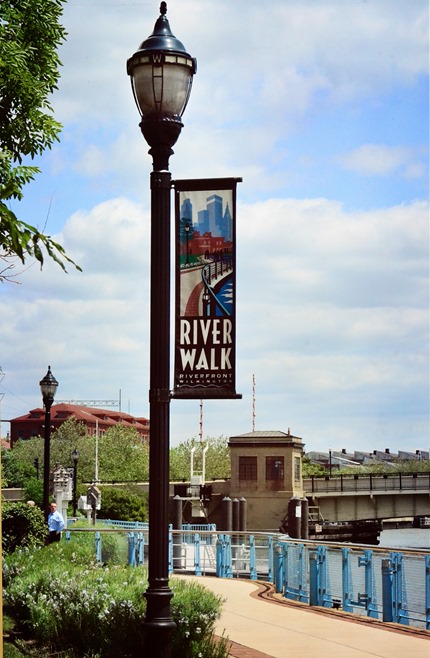 The Christina Riverwalk is short (1.3 miles) but pleasant pathway along the Christina River, between the Russell Peterson Wildlife Refuge and the end of S. Popular Street, just beyond Tubman-Garrett Riverfront Park. The trail offers access to the Shipyard Shops and downtown Wilmington. It's nicely landscaped and passes through small parks where you can stop to sit on a bench along the river. Hare Pavilion overlooks the Christina River at the foot of Old West Street and is a nice gathering place. ~TrailLink.com 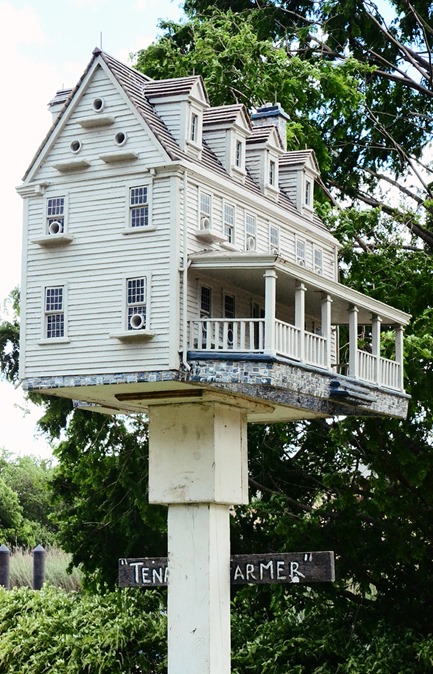 And what fun to see these houses. 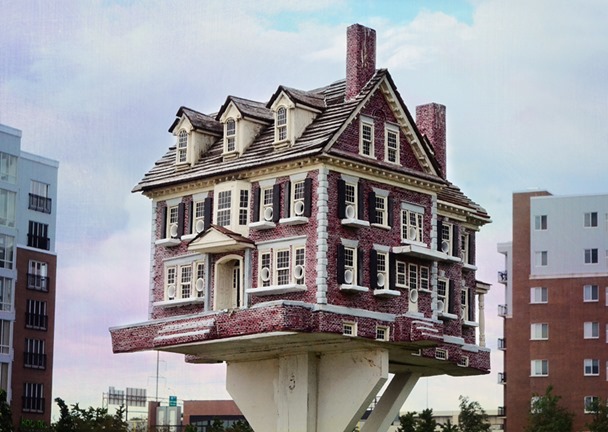 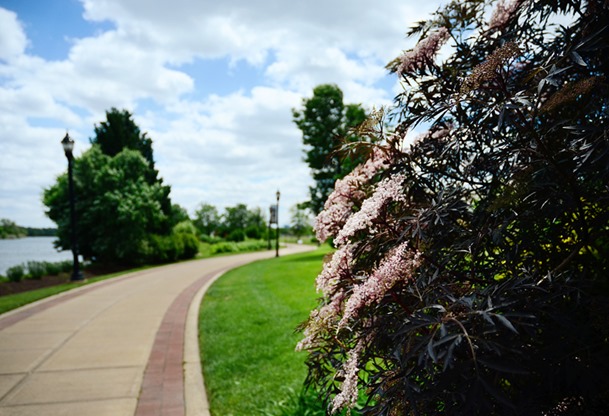 The path is beautifully landscaped. 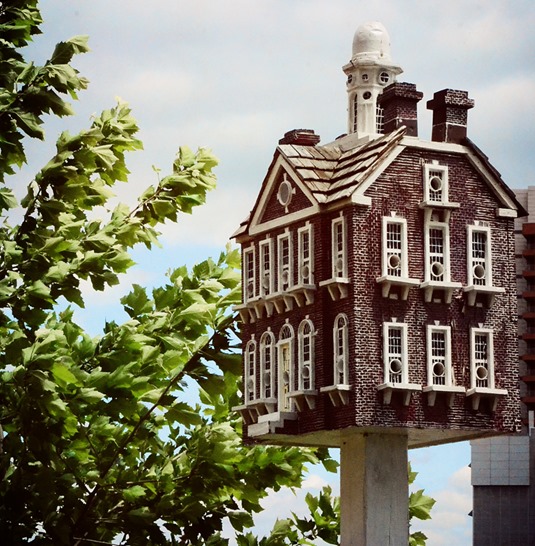 If you live in the area, I highly recommend this little trip. 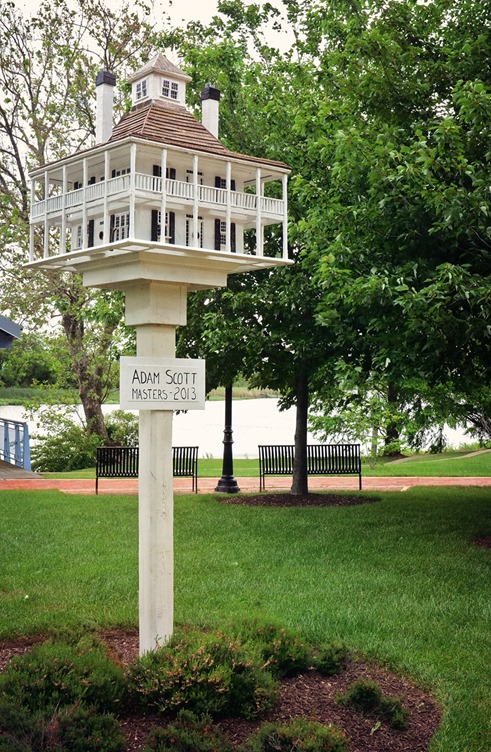 This is a replica of the clubhouse at Augusta National Golf Club, host of the annual Masters Tournament. 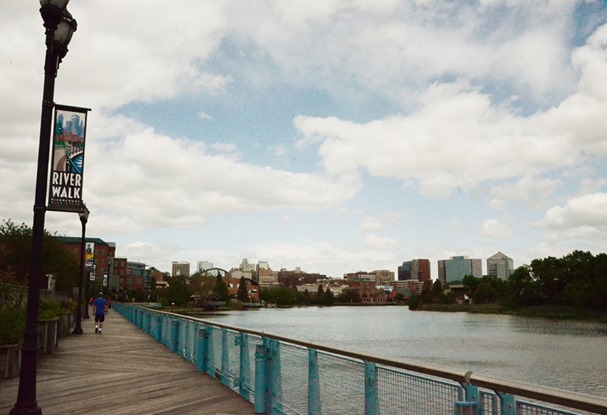 There are several small parks along the way to rest your feet. And several restaurants from which to choose. 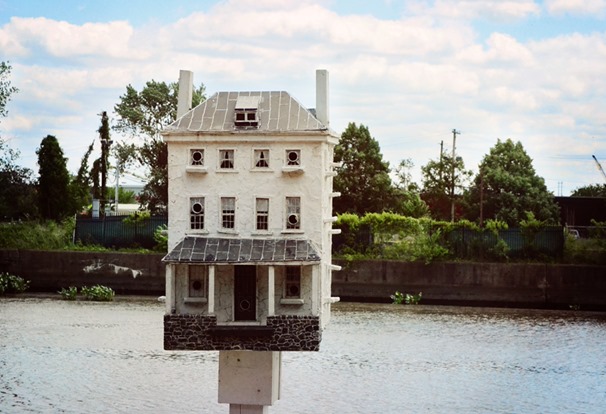 This is another right outside Harry’s Seafood Grill. 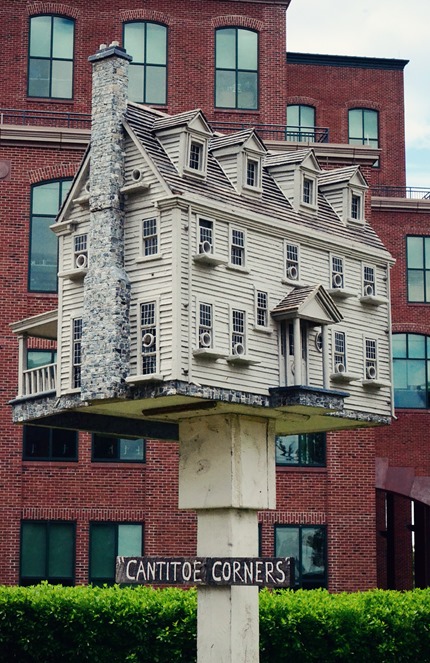 This one was made to look like Martha Stewart’s home in Beford, NY, even using her paint color – Bedford Gray.

Here’s the video from the show. It’s not very long ~ and worth viewing after you get through the short commercial.

Hope you enjoyed ~ I’ll be back when can. It’s been busy here at Casa de George.

What a lovely outing; I would love to take that walk and see those fantastic birdhouses!

What a lovely outing; I would love to take that walk and see those fantastic birdhouses!

I saw that Sunday Morning show, too. How lucky that you live close enough to go see the birdhouses live!! I'm jealous:)

Thanks for sharing this. They are much bigger than I thought they would be. I would love to have a birdhouse that looks like my house. The manor house would make a lovely one too. :-)

Unbelievable!!!Thanks so much for sharing!! Hugs! deb

These are great, I just love that area... sigh.

I want a bird house like that in my backyard! ;-)

Wow, thanks for sharing that, those bird houses are fantastic and the walk looks so beautiful!!

Lucky birds! Them some right fine houses fer sure!!!

What beautiful little works of art.
What always strikes me when I see your small towns is how neat and tidy they are - I have been to many of them over the years and i have never seen a scruffy small town.

Oh, now that's a walk I would love! Birdhouses at every stop :)
What a beautiful place!

I can barely imagine the work that went into each of these bird houses ... especially since they are meant to be outside, not protected in a glass case inside. Each of them is wonderful. (Hi, Reena! Glad you and Kate had such a nice day for a visit.)

I have a 'thing' for bird houses and those are fabulous, although they're decidedly more mansion than house. Beautiful spot and it sounds like you had a great day together with your friend.

Sounds like a nice day out. Love the bird houses and the video.

dang....now i totally want my hubby to build me a birdhouse like one of these.....when he retires, that's number two on the list !!!

thanks for showing us these !!!
xo

Wow! Those birdhouses are amazing.

CBS Sunday Morning is my favorite show too. I've been watching it since Charles Kuralt was on it.

ooh, these birdhouses are amazing!...

The attention to detail in the birdhouses is amazing. Thanks for taking us along with y'all on your walk!

Such detail in those bird houses! Beautiful! I enjoyed the walking tour.

Love the birdhouses Kate. What a great place! Hope you have a good weekend.

What amazing birdhouses! Were there any birds living in them? Maybe the next time we are visiting the in-laws in VA I will talk the mr into a side trip to Wilmington!

So chilly last week and now we are in the hot and humid weather! Strange!

Those are amazing! Are there lots of birds in them???

Hi Kate, what fun to see those birdhouses. Did you see any birds dwelling in them?

these are amazing! i want one now!

Wow, those are amazing! The details are so intricate! It looks like a fun place to walk, too.

We are deep into cicada season here... Our walk today was so noisy! And it's been HOT! I'm hoping we see some cooler temps soon. If the rest of the summer is like this, I will be spending it upstairs in the AC!
xoxo

Content:
Welcome to Make Money Online with best investment in Hedge fund day trading with high returns on Daily Interest the world best revenue sharing program in which High Yield Investment Program, Best Hyip, Best Investment, Hyip Monitor, Forex Fund, Daily Profit, Monthly Interest, Monthly Profit, Earn Money Online, Money Maker Group, Dream Team Money and like this much more and you can withdraw the amount throw referral commission, eCurrency Invest, LibertyReserve, Alert Pay and SolidTrustPay as well. Get 200% profit within 150 days and the minimum withdraw is only $5 which is on daily basis.
For More Details click the link below:

Quite amazing but I do have one question: do birds actually USE these birdhouses?
:-)

Wow doesn't quite express how great these birdhouses are.