Fruit tarts and other such deliciousness

Warning: There are photos of food in this post. I’m just letting you know now that there is a plethora of delectable edibles here, and I’ll understand if you make a hasty retreat from this post.

I mentioned last Friday that one of the parents at our school stopped by to drop off some paperwork for one of her sons and happened to mention that she and a friend were going to the Italian market in Philadelphia.
She then went on to describe pastries, and cheeses, and all sorts of wonderful things and ended up asking if she could bring anyone something. I finally acquiesced, saying that I would love to take something home to my husband, and she ended up getting several pastries for all of us in the front office.

I have never been to this bakery, which is in the heart of the Italian Market, but it’s known for its award-winning pastries. 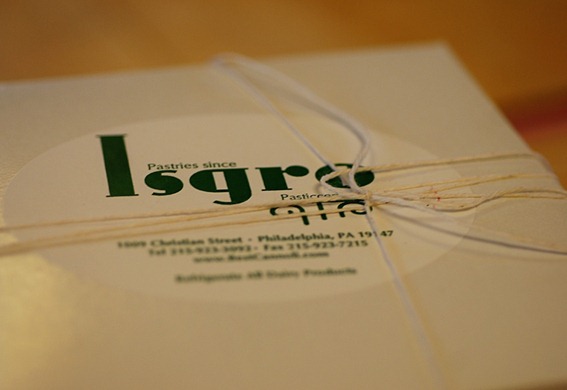 It should say Pastries since 1904, because that’s how long they’ve been in business. I was excited just to open the sweet little box.

And inside was a fruit tart for me, and an individual Italian cream cake for my husband. 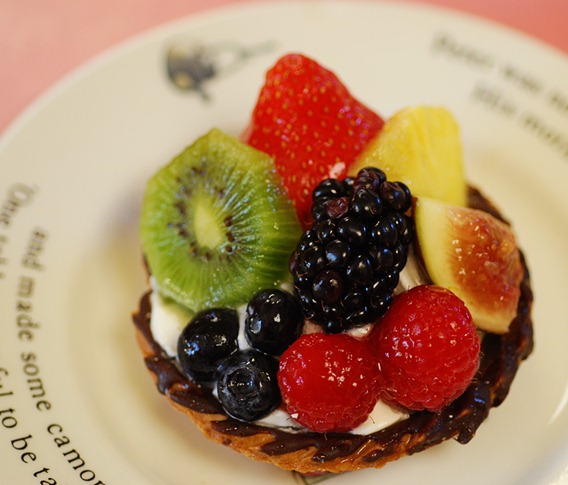 Oh, be still my heart.

I was thrilled that it wasn’t a yellow custard but rather a white, thick, and only slightly sweetened cream. The top of the tiny pastry crust was lined in chocolate. 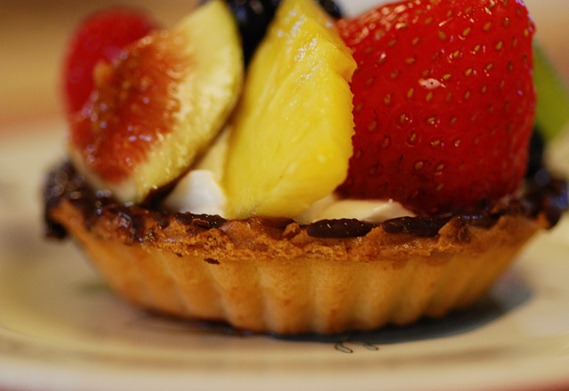 And the tart was adorned with the freshest of fruit bits. That’s a fig making an appearance on the left above. I mean, how often do you see fresh figs?

The tart was divine. 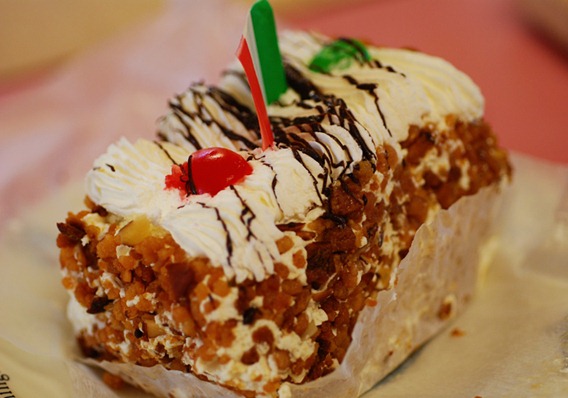 And then there was the Italian cream cake.

My skills at food photography are extremely limited. I try to get the light right, but am terribly lacking at the styling end of it. Looking at this, I want to yell at myself for not getting out a fork and slicing a piece off to show you the inside.

But I didn’t yell, because why beat myself up over something trivial?

It was layers of cake and cream, and oh so good.

Thank you, Suanne, for going to the trouble to bring back these wonderful treats for all of us.

But the food glory didn’t end on Friday. In fact, it only kick-started the weekend.

On Saturday, I made cinnamon raisin bread. 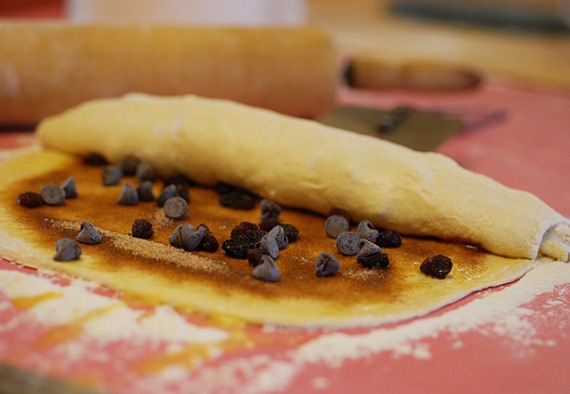 And I sprinkled chocolate chips on it along with the raisins. 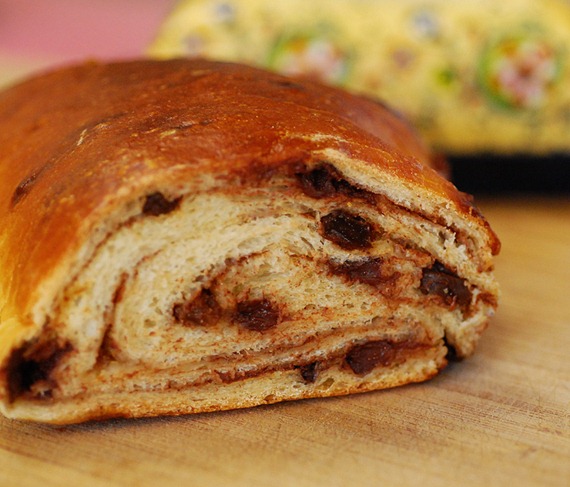 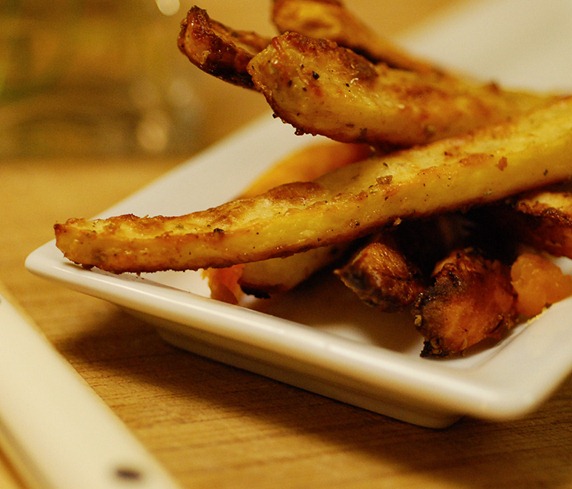 On Saturday night, for dinner, I made these french fries. They were excellent, and I’d found the recipe on Pinterest. They’re actually healthy, too, because they’re baked rather than fried. 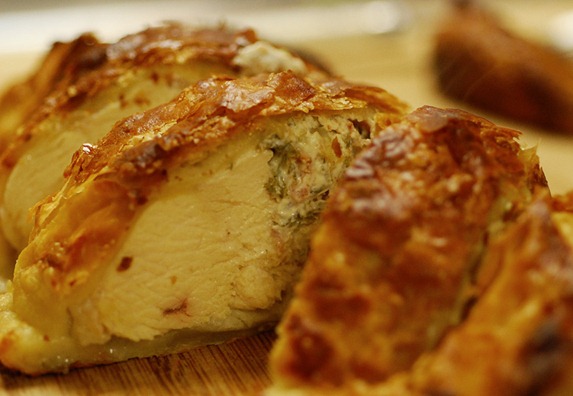 And I also made this. Another treat I found on Pinterest, but it happened to be on one of my favorite food blogs, Kayotic Kitchen. Kay, the cooking Dutch girl, calls it her Kaytucky Chicken. The chicken is made with a cheese spread inserted into a big slice in the chicken, then wrapped in a pastry shell and baked. Delish.

I’m going to stop now because just writing this post made me so hungry that I had to go out to the kitchen and get a small bowl of Ben & Jerry’s Fro Yo. Oh, the sacrifices I make just to write a blog post, I tellya.

I'd like some chicken, french fries and Italian cake please. None of that fruit stuff. I want the really sinful dessert ; )

Maybe I should actually make some of that food I've been pinning ... ya think?

Holy mother of all things food. I want to dive head first into all of these.

SO not fair! I just got home and I don't really have anything yummy, and I'm too tired to make something...so I will just drool onto my screen!

What a yummy weekend you had! And that owl picture from your last post...omg, too cute!

WOW ! all looks soo YUMMY ! I am glad you are enjoying being in the kitchen making wonderful things for you and your hubby. Its nice to have the smell of home baked goodies through the house and even better when ya eat and enjoy them. Awesome photos. Have a wonderful evening.

Thankfully I have one piece of pumpkin pie left here:-) The cake looks sooooo delicious.

It's 9:05 p.m. as I type this and I have already brushed my teeth for the night. Durn, I should not have read this tonight. You are an awesome cook and your food images have left me salivating. xo ~Lili

i've licked my computer screen twice today thanks to you.....but i sooooooo appreciate it.

hey maybe i'm on to something. it could be a new weight loss program.

...Oh. Em. Gee. Is right! :o) Sheesh, that first photo of the tart is absolutely divine! And that Italian Cream Cake looks like a lil' hunk of heaven. ;o)

...You are quite the little Martha these days woman - you go! ;o)

...Hope you're having a great week so far!

...Thanks for making me want to go and raid the frig' now. *sigh*giggle*

You just had too much fun this weekend.

O.M.Gee... this all looks soooo good. I have to check out Pinterest. Also, must try your raisin bread, I think you've posted the recipe before.

If you had any of the desserts at our rehearsal dinner, then you have experienced Isgro's before!

My mother used to make an Italian Cream Cake... I may have to search for her recipe now. I hold you responsible for the calories!
The chicken looks yummy too!

Yum .. I think Reena and I need to go to this bakery this Saturday ...

Oh how I wish (maybe my waist doesn't) that we had a bakery like that nearby.

Popping over from
Kat's on the wrong
day, as I'm trying a
two-week-eat-right-
before-the-feasting-
begins plan this week
and next! Yikes, this
all looks soooo good.
Beautiful photos; food
is hard to make appealing
in pics!

Got to admit that I was a little worried last night when I tried to click on your blog, and it said that it was "gone". Done, kaput, finished.

ACCCCKKKK! Kate is gone? Where, and how, and why...

But here you are now. Thank goodness. I love to read your posts.

Oh yum! Those fruit tarts are my favourite and the cake looks totally delicious too. All the food looks tasty - thanks for sharing...sort of.

I am positively drooling here in the UK.

Oh my word I'm soooo hungry!!! this was absolutely delicious! the pastries were to die for, and that chicken, my gosh! Okay, I'm going to eat lunch now!

Now, all I want to do is go home and cook....and it is usually the other way around...the chicken looks soooo good....and I have the Peter Rabbit plates.....all I need is the tart....oh and the fries....yuuuuum!!

Love the photos! I guess I will have to settle for an apple. (How dull)
I too tried to check your blog this a.m. only to be told you were gone. Nice to know it was only a warp some place.
I bought the bread book. It is lovely! We have been making bread ever since.
Thanks for the great suggestion!

Wonderful photos and scrummy food but the best thing is that your blog is back - was horrible when it disappeared and the message didn't explain. Hope you are all ok K x

Your food photography skills are FABULOUS my friend!! These should be in a magazine!!
Yum-O!

OMG, fabulous photos and no calories if we read about these recipes on the Internet, amirite? :o)

I am so glad that I had just eaten lunch before I read this! That homemade bread looks better than any bakery pastry to me!! You have been busy in the kitchen!
xoxo

I just got to read this and my mouth is hanging open. And it's 8 PM and I have not had dinner but, after seeing all of this, absolutely nothing in my fridge is going to satisfy me!

Oh good Lord, I need to make me some of those fries.