I was recently contacted by a representative at TLC Book Tours to write a review on a book of my choice. I chose Susan Schoenberger’s A Watershed Year because I found the description interesting, and truth be told, I liked the title. 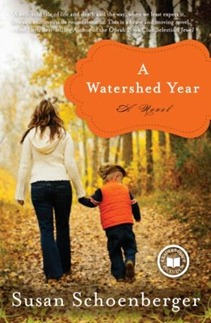 It was the year everything changed . . .


“It made me feel better to think that we could talk, somehow, beyond the end of my life, that I could preserve my presence in some small way. And I haven’t told you everything I should have. I wasn’t finished yet, at least where you are concerned . . . “


Lucy never confessed her love to her best friend Harlan before he passed away. Two months after his funeral, she is haunted by the power of things left unsaid when she receives the first of his e-mails, arranged to be sent after his death. So begins the year everything changes – Lucy’s watershed year.


This is a beautifully written book, with complex characters, and I greatly enjoyed reading it. I especially liked the familiar setting – Baltimore, Maryland – so near my home. And I loved the main character, Lucy, a young college professor whose loss becomes the impetus for a major change in her life.

The book begins with the death of Lucy’s dear friend, Harlan, a could-have-been lover who became ill before their relationship took that next step. Out of all of his friends, Lucy is the one who cares for him in his last months, determined that he will get well. But Harlan knows otherwise, and begins to secretly pen letters to his friend that he hopes will help her in the time to come when he is gone. He arranges for them to arrive via e-mail at the beginning of each month, and when one of the letters mentions that she would make a wonderful mother, Lucy begins to wonder if she should adopt a child. Circumstances seem to begin falling into her lap, and before she knows it, she’s caught up in the whole adoption process.

The adoption itself, with all of its twists and turns, is an excellent plot that runs alongside the flashbacks into the relationship she and Harlan shared. Lucy decides to adopt a Russian child, and actually has to travel to that country to collect what she had originally hoped would be an infant, but who turns out to be an angry 4-year-old boy. I was on the edge of my seat while reading about the trip, as well as what happened upon her arrival home.

What I found extremely interesting was Lucy’s specialty at the college, where she studies and teaches the lives of the saints. I guess some of her friends found her vocation rather odd, but I liked the saintly anecdotes that were peppered throughout the chapters. At the time I read this book, I was going through some turmoil in my life, and I marked this page because of the mantra:

Grief rose inside her until it focused itself inside her throat. She took a deep breath through her nose as a prayer from Blessed Julian of Norwich came to her. It was a maddeningly bland prayer, so nonspecific that it bordered on the useless; yet somehow it always made her feel better.

A Watershed Year is Susan Schoenberger’s debut novel, and won the William Faulkner-William Wisdom Creative Writing Competition in 2006 under the title Intercession and was short-listed for the Peter Taylor Prize.
For more information, please visit www.susanschoenberger.com.

So interesting to read this against the backdrop of the (very) little I know of your life, and what I know of some friends of mine who adopted two (very angry) eight-year-old girls from Russia!

...Your review of this book is nothing short of spectacular. [insert applause here] The book sounds so intriguing, as well as heartbreaking annd heartwarming all at the same time. Does that make any sense at all? *sigh*giggle*

...Great job Kate and I tip my hat to TLC Book Tours for asking you. They chose right! ;o)

...I will definitely be placing this one on my Wish List!

sounds intriguing...i have to start lining up good reads for winter!

This book sounds wonderful. You did a fantastic job on the review here, I to will have to start looking for books to read through the cold winter months. Have a wonderful day !

I can't wait to read this book. I've already ordered it from Amazon. It reminds me a little of P.S. I Love You but sounds more thoughtful. And I love the idea of reading about her adoption journey. Thanks for reviewing this book.

I was on the edge of my seat, reading your review. As a person of Russian desent, I was intrigued by the Russian adoption but even more so by the e-mails. I need this book - I need to know what Harlan said!

sounds like a great book...great review...I see why they contacted you to do it...

I loved your review of the book Kate. It sounds like something I'll download for winter reading material.

I too have used that mantra for the difficult times in my life. In fact I hung on to it like a life line! I first heard it in T.S. Eliot's Little Gidding, having borrowed it from Julian of Norwich.

Thanks for this review...very insightful and intriguing.

What a thoughtful review and what wonderful comments! Thank you all so much for your interest in the book. If anyone has any questions, feel free to ask. I'll be checking back.

That does sound like an interesting read. I like the mini prayer. It could be very calming in tough moments.

I've been wanting a good book to read. I'm going to the library tomorrow and see if I can find it.
THanks so much.
Have a Tiggeriffic Day~ ta ta for now from Iowa:)

The description hits slightly too close for comfort (unrequited love in whatever form is tragic) but the plot is intriguing and different. Going to buy this one ASAP. Thanks for the review!

Well done review .. of course the tech in me must know how Harlan arranged for emails to be sent after his death ..

I think I should put this on my list for a very rainy day. Good job!

That picture on the book reminds me of your place.

Thanks, everyone. Wow - even a comment from the author! And to Japanese Redneck: It was actually one of the reasons I was drawn to the book. I know you can't judge a book by its cover, but still . . .

ps - the book is on its way to my sister in Florida who can't wait to read it.

Intercession...I learned in confirmation class. Wonder what her background is....love this! Are we having a giveaway?? xoxo

sounds interesting...might have to add the book to my list!

Thank you for the review...this will definitely go on my "to read" list.

I agree with what tj said, 'here here'..good job Kate!

What a great review! This sounds like a book I would really enjoy.

I will be adding this to my ever growing book list now. It sounds really good.

This book sounds intruiging. It's on my shopping list.

I'm glad you enjoyed this book as much as you did! Thanks for taking the time to be a part of the book tour.

You have nade e want to buy the book Kate so I shall now go to see if I can get it from Amazon.

Fantastic review, I am inspired to read it.

Everything you write about makes me want to dash out and get it. This is no exception.

One of the commenters mentioned PS I Love You. I loved that movie, and I hadn't even thought about how the plots are similar.

I also loved how someone else pointed out that the cover of the book looks a lot like where you live. Holy gorgeousness, huh? :)

Your review of this book is nothing short of spectacular. The book sounds so intriguing, as well as heartbreaking and heartwarming, a great quotations also.

Thanks to all of you who expressed interest in "A Watershed Year." I hope you get a chance to read it, and I welcome all feedback. You can email me directly at susan.schoenberger@gmail.com.

Great review Kate, you have me intrigued just reading it. xo ~Lili