I never did make it to my friend Adrienne’s house, but here’s how I spent my day on Saturday. It was great to see my family. 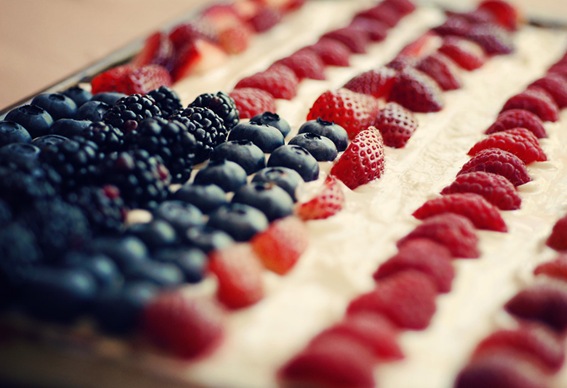 My nieces (Em & Sam) made this dessert and it’s one of my favorite Pampered Chef recipes. It’s got a cookie bottom and a cream cheese & Cool Whip top.

Sort of like me, come to think of it. 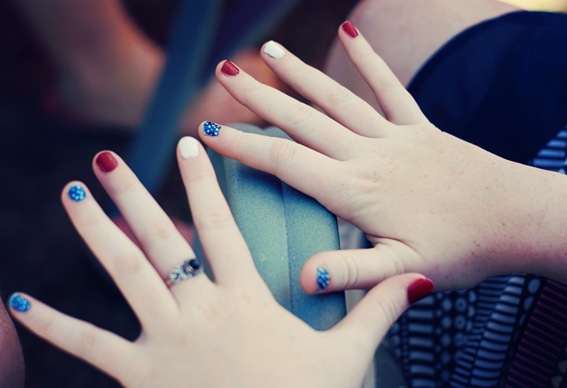 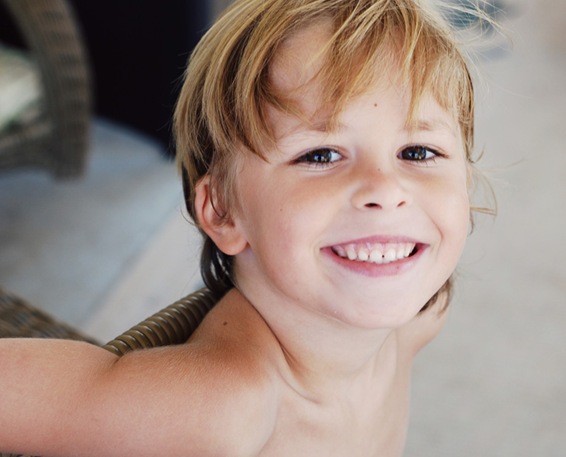 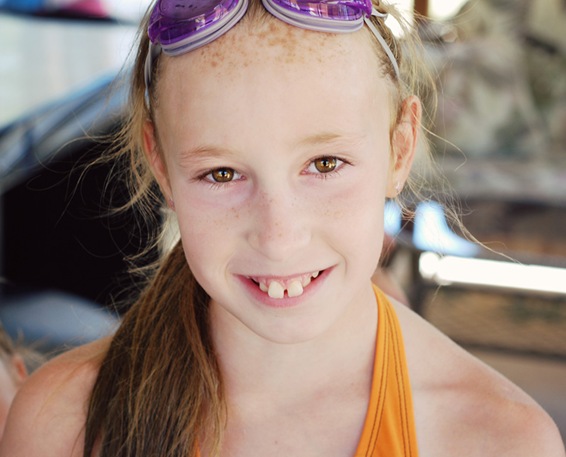 Sugar and spice and everything nice. 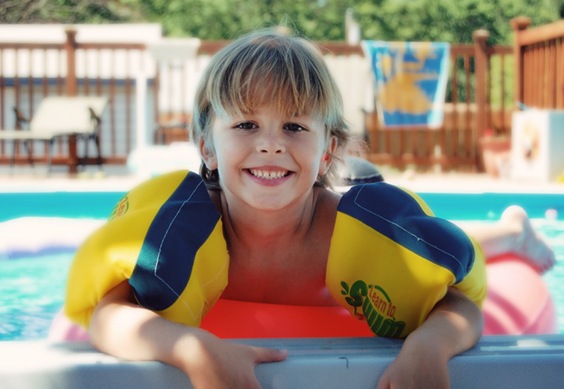 As soon as I get hot, Joshie.

When will that be? Aunt Katy?

Aunt Katy, I’m in the pool and I have my swimmies on. Are you coming in yet? 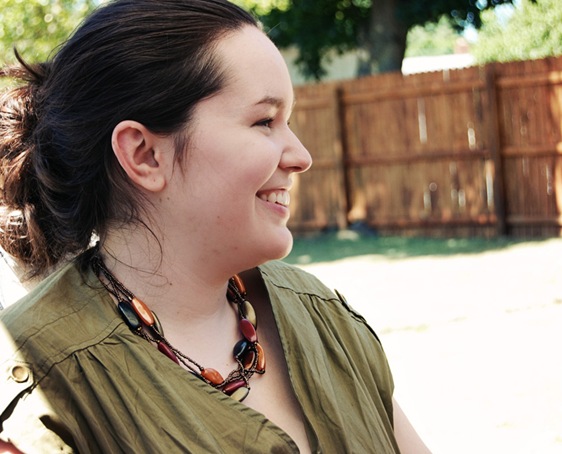 Aunt Katy, I think Josh wants you to go in the pool. 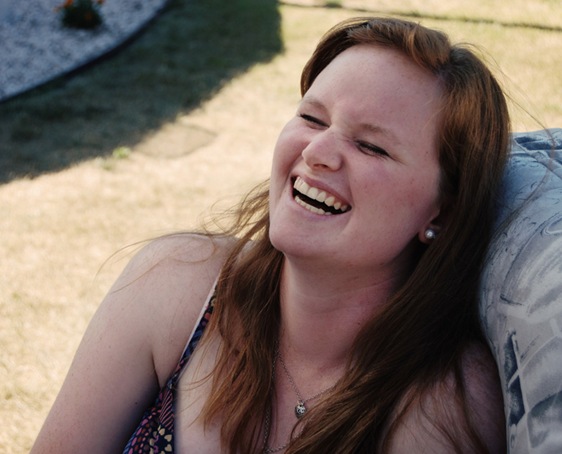 Aunt Katy, we all want you to go in the pool. Please make Josh stop asking.

(Just so’s you know, I did go in the pool. I was in there for over two hours and played almost the whole time. I was exhausted and needed a nap afterwards.) 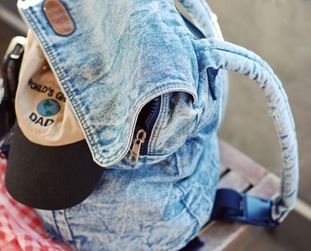 Ok. Now a question for you, and my brother is going to kill me for posting this. But it’s not as if he reads my blog. Or ever checks his e-mail. So here goes:

This was sitting on a table on the back porch. It’s a little backpack that you can see is made of denim. It belongs to my brother, Steve. We could tell it was Steve’s because of the hat. But the bag? We began questioning him as to why he would still carry such a thing, with it being such a long time since middle school and all. I don’t know, maybe it was the mojito’s talking, but suddenly it was like an episode of ‘What Not to Wear’. And this bag, as well as Steve’s freshly cut-off shorty-shorts were at the top of the list.

Because he’s been sick and has been in and out of the hospital for the past several months, we thought maybe we should take it easy on him.

Steve attempted to defend the bag. “But it’s DURABLE", he said loudly.

“Wait a minute. Did you say ADORABLE?” we asked.

So what do you think? Is it time for another duffle bag for Steve?

Hehe, tell Steve that the 80's called and they want their acid washed denim bag back! ;-) Glad you had a wonderful 4th and I'll be VERY careful what type of bag I carry if we ever meet! lol

Um - Steve, honey - Um....first that is an ACID wash denim bag....as Low Tide said, the 80's want their bag back. And Steve, honey, bless your heart, it is a girl's bag! Not even a woman's bag, girl's. Sweetie...time to pack it away. Check at Dick's sporting goods, there are a lot of very nice durable manly hiking back packs there.
But honestly and with no teasing at all, I was just glad to read that he was well enough to be at the family gathering! :)

Guys don't think about these things. They just don't. He doesn't care if it's acid wash, 80's, or army surplus. It's functional and it was available. I suspect the only way he'll get a new one is if someone gets one for him!

Thanks for the Pampered Chef shout-out. Did you know I sell the stuff? You probably have a local source, but I just thought I'd mention it. It wouldn't be conscientious of me to let that moment go by...

Hi Kate,
What a collection of great faces! Glad you enjoyed your day. We were wet all day, too...but because of rain. We had a great time with friends. Some times you just have to improvise.
Have a great week, my friend.
xoxo
Donna

I am gonna side with Steve, this could be his security blanket.

Dare we strip him of his confidence in the name of fashion rules?

Happy Fourth, Fifth and Sixth. Sounds like you had a swimmingly great time.

About the duffle bag. Absolutely not. He should keep it and use it proudly. It sets apart from everyone else. Who cares if it's out of style. Anything goes these days and who wants to blend in, anyway? If he's been sick, all the more reason to stand out and be noticed. It's got my vote, Steve! (Besides, I like durable. *grin*)

REAL men can carry a denim bag like that and probably use AXE body wash too... uh-huh! Go Steve! ;c)

love the bag... keep it steve real men .... lol joshy is adorable looks like a bunch of fun was had by all! cake looks great got a recipe to share with me :)

Yay for making it to the pool and enjoying the swim. Gotta be much better than your simulated pool in an earlier post. Condolences to Steve for having to endure the family hassle. (but tell him get a new bag)

Puh leeez... will someone buy the poor man a new bag?? This little denim thing is just not right... it's just not right. I don't care if it's not Christmas yet... GET THE MAN A MAN BAG! LOL

Haha, too funny! The bag actually was as hilarious as his cut offs! I think I know what I'm getting him for his 50th birthday, new bag and new shorts!

It was great seeing you and I'm so glad you actually went in the pool cause the kids loved playing with Aunt Kate!

I LOVE the backpack!! In fact, I want one!! I LOVE the festive dessert too - how yummy!
What a lovely family you have :)

I'm with "altar ego" we don't think about these things, and actually, wait a few years, it will be back in fashion.

The dessert looks mighty good right now,seems my eyes are big and my belly is rumbling,save me a slice!

Such lovely photos Kate...looks like you had the perfect weekend. As for the bag...I donno...if it makes him that happy, so be it. But I wouldn't stand next to him ;)

Well as The World's Greatest Dad, I think he should be able to wear anything he wants! :)

I love that he likes that it's soft. Men are such tactile creatures sometimes, aren't they? I caught my hubby-to-be (at the time) running his fingers through the sleeves of some fine-knit tops at a department store one day as we were walking through. He sheepishly admitted, he 'just liked the feel of them'.

I still think if we bedazzle the bag it will be even PRETTIER!

My thoughts are whatever makes him happy. Cause that's how I am.

I think I have to side with Steve as well. If he likes it, and it's practical for him, I don't see any reason he shouldn't use it.

Love your 4th pictures, it looks like a great time!

Looks like you had a wonderful Fourth!
Tell Steve to step it up and get a man purse. :)