Hello my friends. It’s been a long week, culminating this evening when I arrived home, flush wish joy because it was the weekend . . . and sunny. I reached to open my back door, and in doing so, slipped on the ice that had accumulated there and fell, shocking myself, ramming my elbow into the concrete walk, and subsequently bursting into tears. I tried to get up, but kept sliding on the ice – so I laid there. Crying.

I am not a crybaby, but damnit – it hurt. I had an armful of things including the mail, my lunchbox and another bag I take to work. I eventually made it to a standing position after seeing a puddle of what I thought was blood. OMG – I’m bleeding!! (this was my first thought). On closer inspection, however, I saw that I’d broken the bottle of wine I had just bought. And I was now lying in the puddle that it had caused.

But despite that unfortunate turn of events, things have actually begun to take a positive turn – or so it seems. It’s maybe too soon to celebrate over, but a lot of little things have been conspiring into something akin to joy. Yes, it’s true. And while I’m at it, I think I’ll share with you now some photos I’ve taken during the past week. Just because, you know? 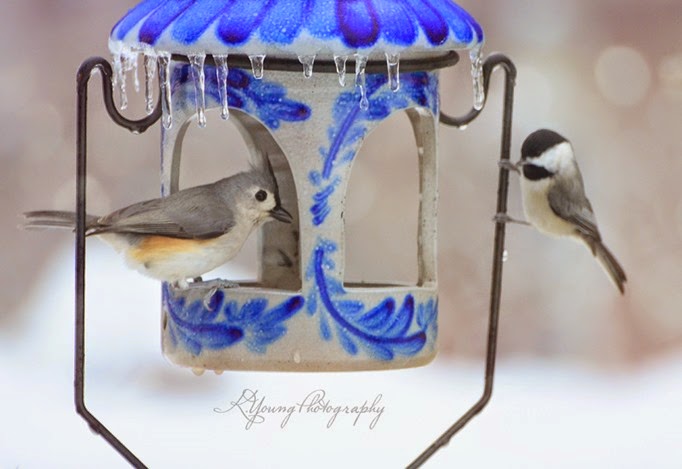 Cold and ice can be beautiful, you know. 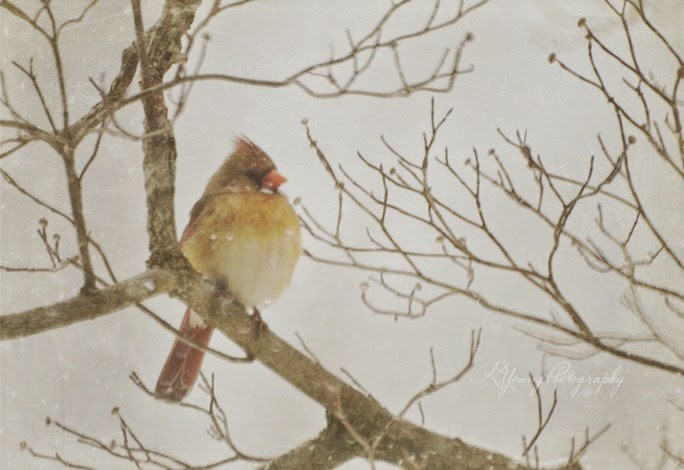 I keep the feeders filled because I can’t have my bird friends hungry. 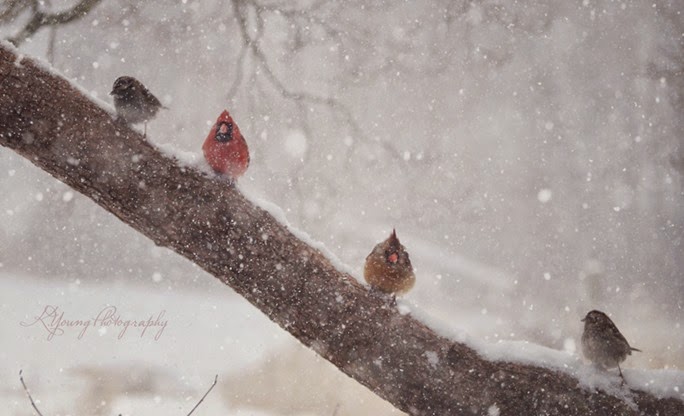 This was the view out my kitchen window at one point this week. 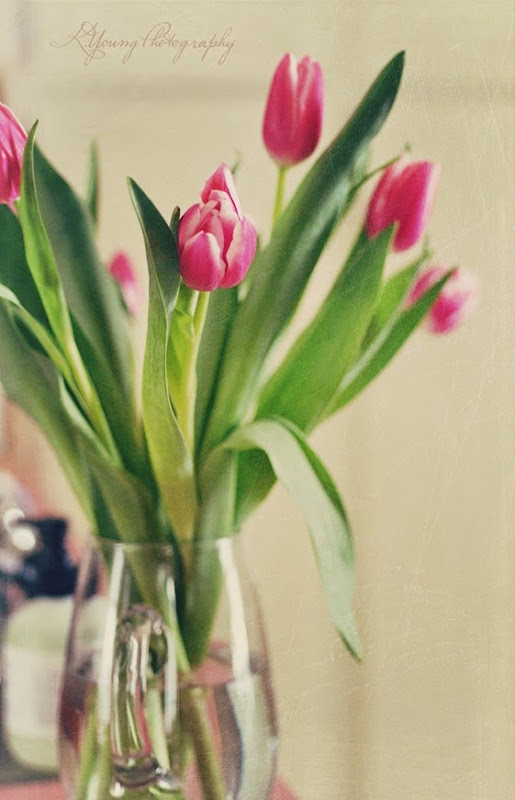 I buy myself flowers because they make me happy.

And a bunch of tulips are currently $4.87 at the local WalMart. 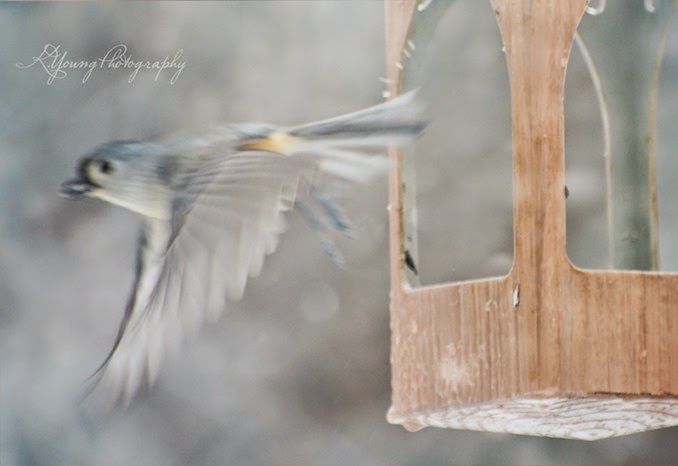 Took this last weekend sitting in the sunshine in the freezing temps.

As long as you’re dressed properly, it ain’t so cold. And the warmth of the sun is the nectar of the gods. 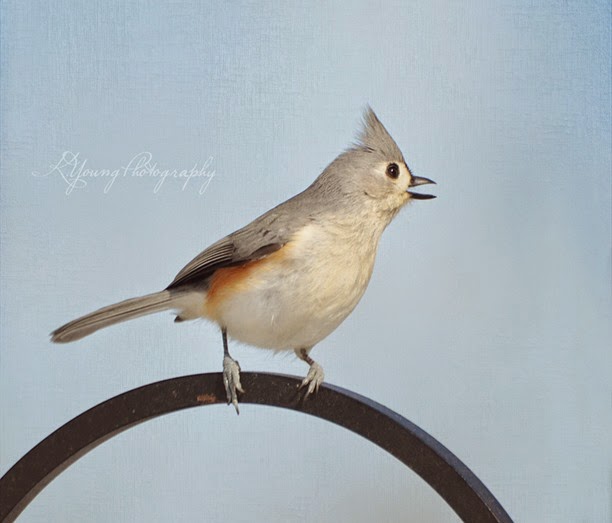 The tufted titmouse is one of the loudest visitors to my feeders. 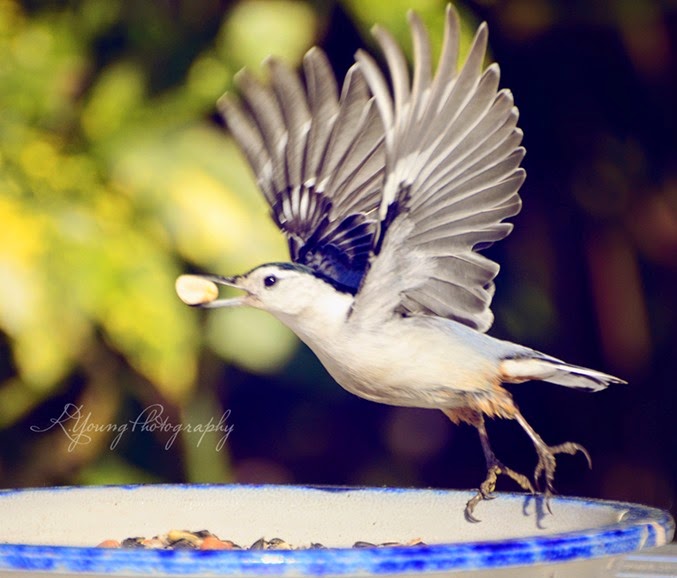 Wing action on a nuthatch. 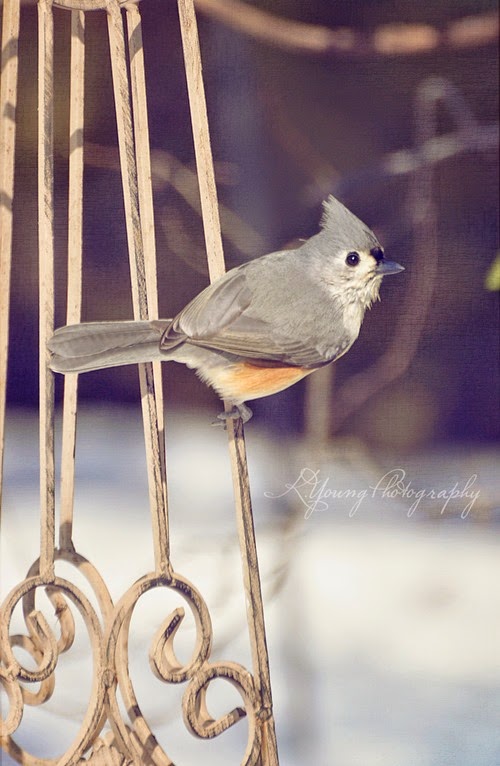 In other news . . . things seem better with my son.

We are getting a new kitty tomorrow.

I have been selected by a juried committee to have my work shown in a local gallery.

I bought two bottles of wine today (and only one was destroyed).

And spring is coming.

So how are things in your neck of the woods?

Visitors to my feeders

The winter continues to hold us in its icy grasp, but I’m thankful I don’t live in New England. Sorry, my New England friends. I just can’t handle that much snow at this point in my life. I’ve seen pictures and heard the news and winter this year has been brutal to so many in this country. So far, ours here in Maryland has been much less severe than last year – and for that, I am grateful.

We’ve had some snow, though. And it’s been rather pretty. But it’s been terribly cold lately and when I woke up yesterday morning, the temperature was –1. With the wind, it felt a lot colder.

I still don’t have internet at the house, but am using my mobile hotspot on my cell phone to post some photos I’ve taken over the past week or so. I keep the feeders filled but this past week, have been inundated with the damn starlings and they have eaten me out of house and home. I have to go out today to get more bird feed because we’re expecting more snow tonight. Starlings annoy me because they arrive in flocks and swoop down, ruining my feeders and scattering all the smaller birds. 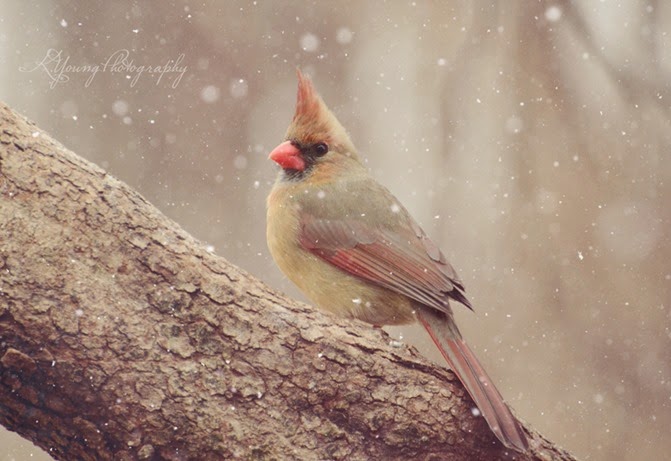 I always like to name the birds for you. This is one of my favorites ~ a female cardinal. 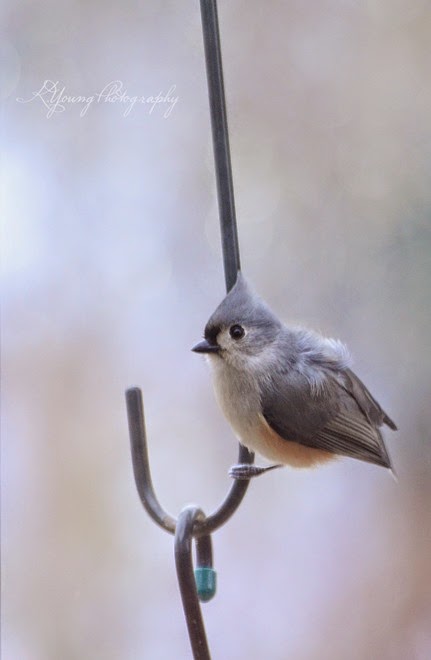 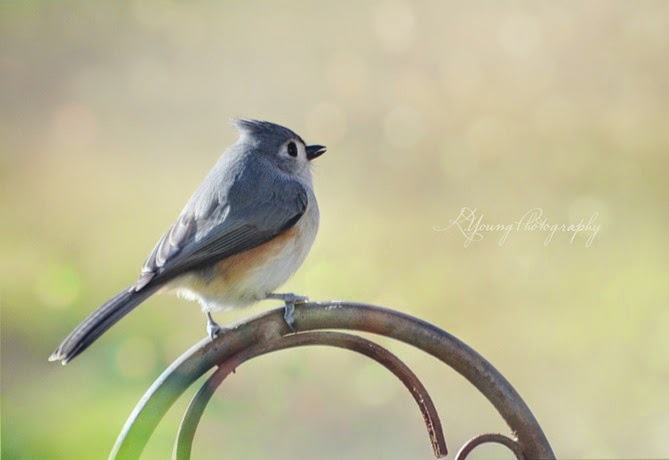 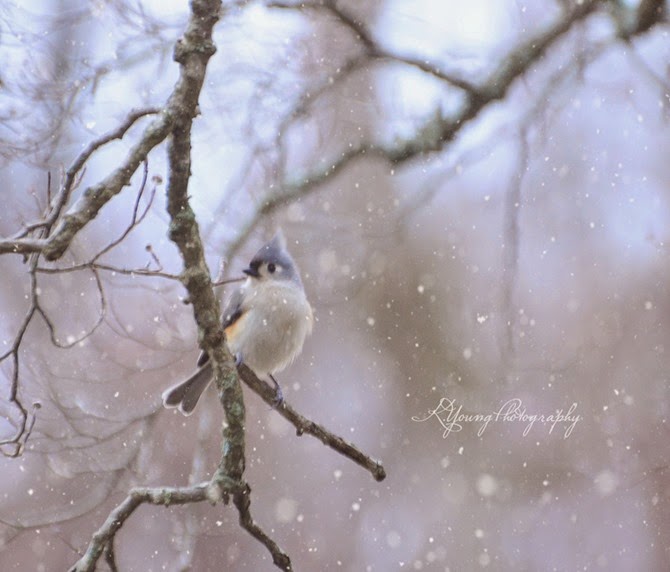 (so are the bare branches, imho) 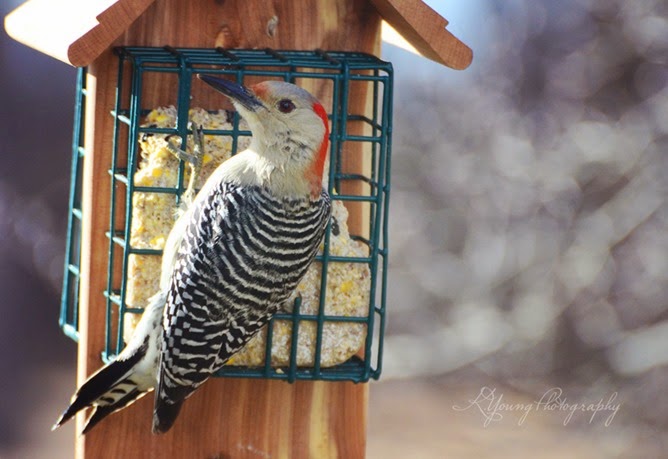 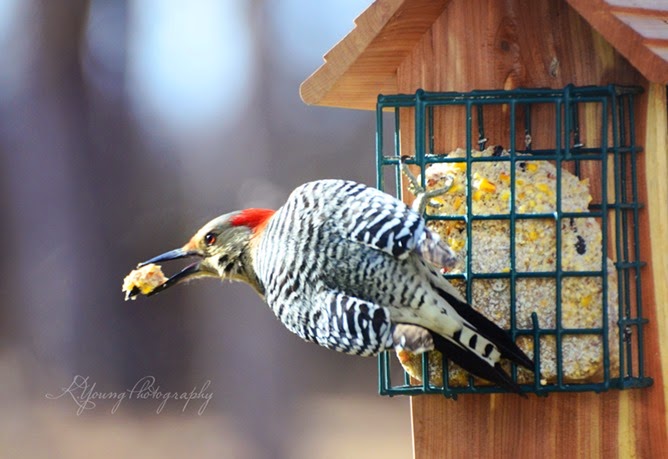 They do have red (pink) bellies. The males sport a red head as well. 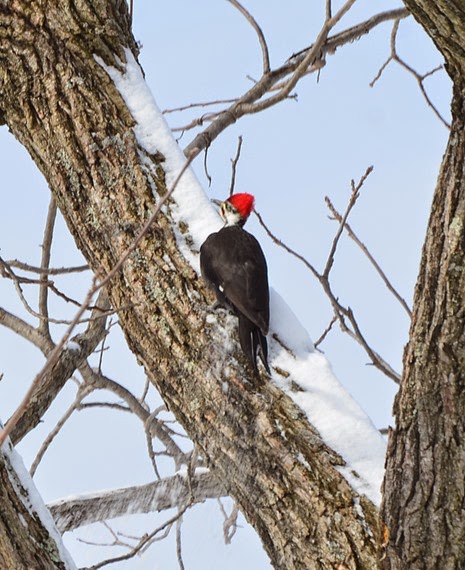 I sat outside in my lawn chair last Sunday in the sunshine. It was cold, but the sun was warm. As long as I’m bundled up, it doesn’t bother me. And I was in a protected area from the wind. I sat there reading my book and looked up when I heard a pileated woodpecker calling. I went inside to get the camera after hearing the distinctive sound of him drilling in one of the tall trees on the property. It is a very loud drilling sound. He was eating the snow when I caught this photo of him. Guess he was a little thirsty. 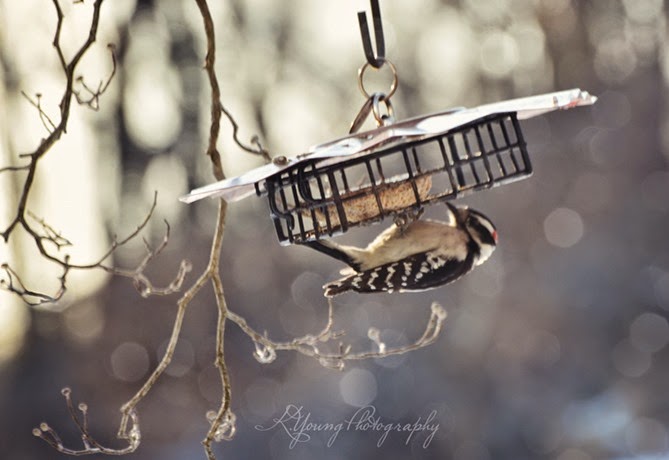 (I love this photo.) 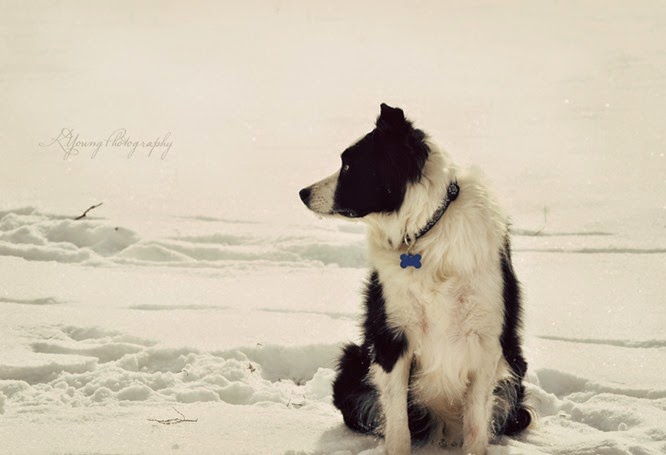 Thank you for your continued visits despite my lackluster posting of late.

Oh there you are

Hello, my friends and apologies for not posting regularly. I have some things going on right now and one of them is the fact that I currently do not have internet at my house. It was my own doing and I have my reasons and they involve my son. To write and upload this post, I’m using the mobile hot spot on my phone. I looked into all of it before the Big Decision and the hotspot comes with my plan. I rarely use it but it’s nice to know that I have access. I also bought a Kindle and have been reading a lot.

Today is a snow day, only our second of the season which is pretty amazing. No snow but we certainly have a layer of ice. I was super careful walking across the patio this morning when I went to top off the bird feeders.

I keep the camera by the kitchen window in the wintertime and am sharing some images of the visitors I’ve had over the past week or so. The light in the mornings is not so great, but by the afternoon, it’s sometimes enough to make me swoon. 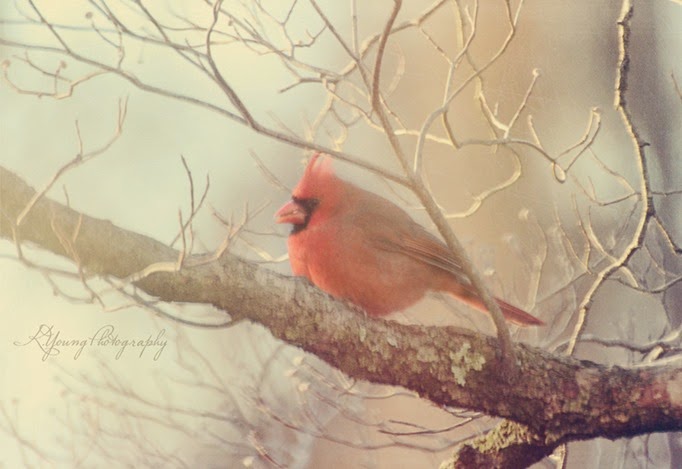 I didn’t think this one was at all good, but when I began to edit it, I changed my mind,, falling in love with the soft colors and the pretty background. And of course, fat Mr. Cardinal. 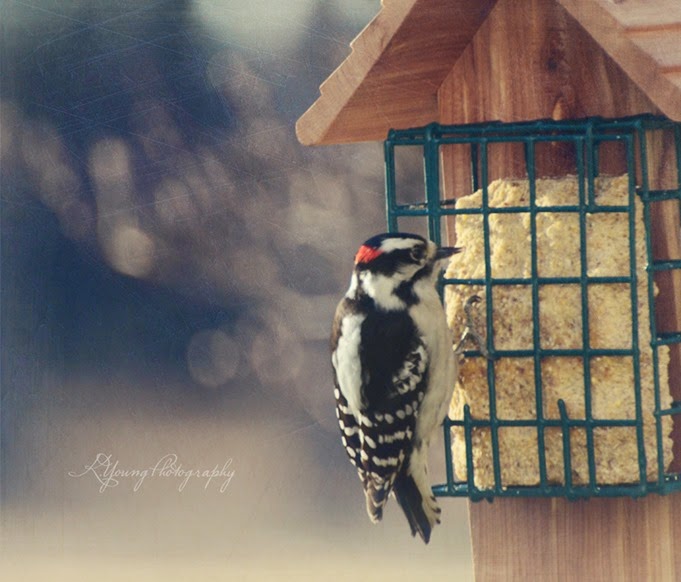 A downy woodpecker visits my suet block. This double-block is a new addition this year. 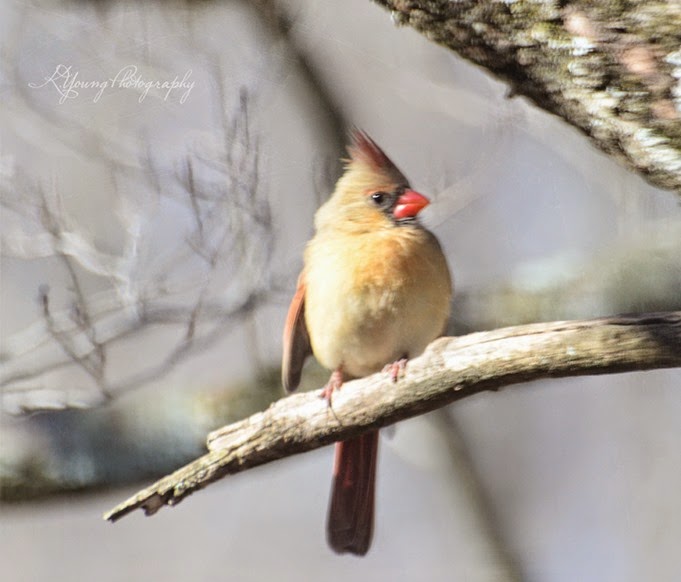 And Mrs. Cardinal with her soft and pretty blue background here.

It is difficult sometimes to get photos through the glass and this one is a bit distorted because I’m shooting at an angle and not straight on. 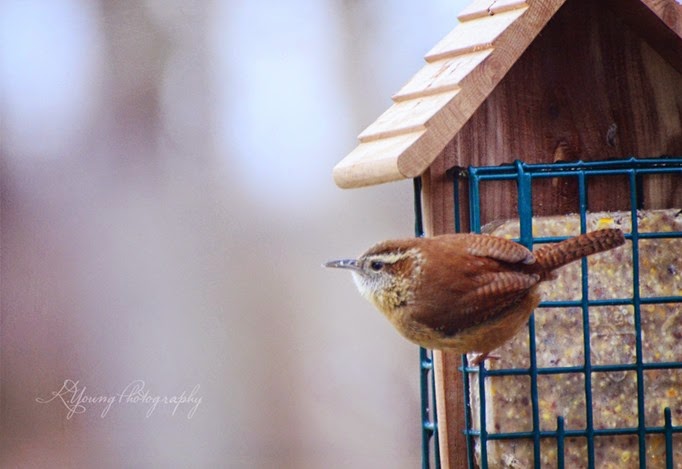 The feeders are straight-on shots through the glass. 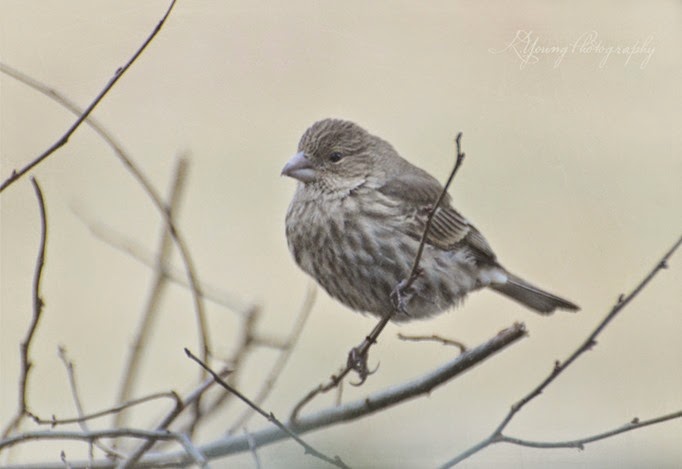 This soft little house finch waits her turn for the sunflower seeds. 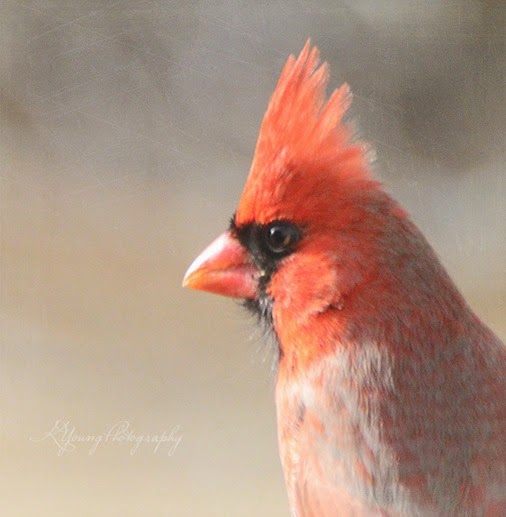 The afternoon light was soft and pretty when I captured this male cardinal. I cropped him for just the head shot.

Today I’m going to get some laundry done and will probably make something yummy for dinner. I have reading to do and will take my buddy on a walk later on. But for now, it’s another cup of coffee for me. 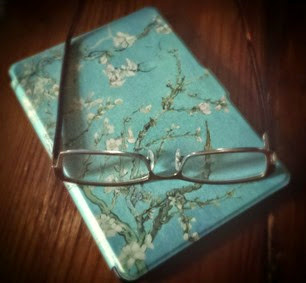 My son, Matt, gave me a Kindle for Christmas this year and I had really wanted the Paperwhite. So I returned it and upgraded to what I wanted and I love it. I also needed a cover so I did some research and found one that I am really happy with. I couldn’t believe how much some of those covers sell for, but this one was only $16 from Amazon (Prime). It’s super thin, which I like. And it’s really pretty. Here’s a link:

I’ve read several books this past month but my favorite so far is the first of the Outlander series. I’m well into the second book and am liking that one as well, but it’s a great story.

Thanks for stopping by to visit. I don’t tell you enough how much I appreciate it.