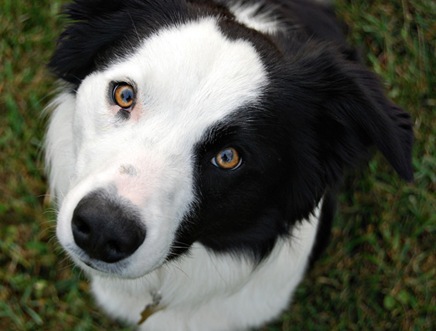 George was born on July 11, 2007 in Ellsworth, Maine. We found him (of all places) on the internet. He’s the third border collie we’ve owned and after our beloved Ralph’s death in late 2005, we swore we’d never have another.
After about a year of being petless, my husband began looking at sites where borders were offered for sale. When I asked him about it, he said he was just looking. I didn’t want the bother of another puppy, and  reminded him of what it would entail to raise a puppy. He absolutely agreed, he said. He didn’t want another dog. He just was looking.
And then, one day I came home from work, and my husband was excited. (This doesn’t happen all that often, so I knew this was something big).
He’d found our new puppy, he told me. And he showed me the site. I really didn’t want another dog, but I kept my mouth shut.
And as I watched him scrolling down, reading me what the owners had written, and viewing photos of the litter, I could see that he really was serious about this. He’d already had a plan to fence in the backyard, and what we could get for the puppy, how we’d train it, where he would sleep . . .
And at that moment, I knew we were getting a puppy.
And I haven’t regretted it for a minute. Well, maybe a couple of times, but George has turned out to be a pretty wonderful dog.  And with my husband’s second diagnosis of brain cancer, and the subsequent loss of his job, George turned out to be the best thing for him. 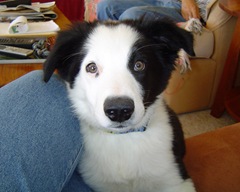 We named him George because he will be the last dog my husband owns (his words, not mine) because my husband is quite sure the dog will outlive him. The name had always been a sort of ‘buddy’ name that my husband and our best friend, Warren, have for each other. We’ve all known each other since high school and at some point Warren and my husband just started calling each other George.
We began training him early on, just basic obedience. And he’s always loved playing Frisbee, fetching, Frisbee toss . . . George has a decent sized vocabulary and knows what many of his toys are named. He can go to his toy box and pull out a toy you request. 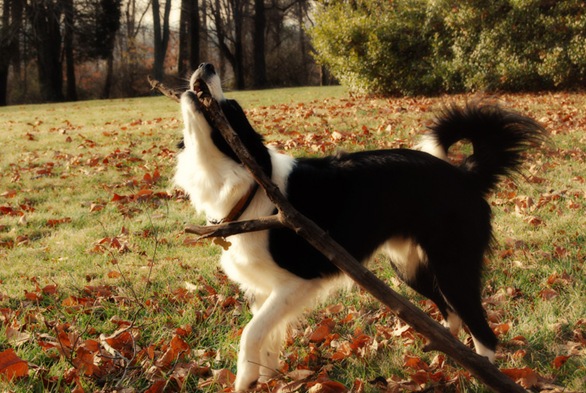