All shall be well

Hello, my friends. If any of my former friends are out there listening . . .

I know it's been too long. I know this and I am sorry. But so many people lately are telling me to update this place, and to let readers know what's going on my life so I thought I'd follow their advice. Not because I think what's going on is so extremely interesting. But I am still here. In the old manor house on the hill.

For one more month from tomorrow. 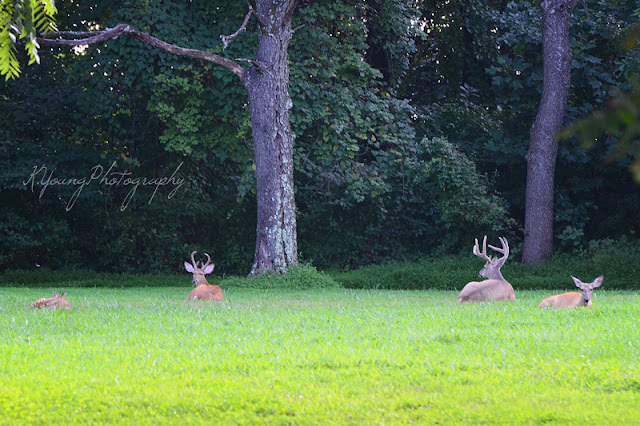 Yes, I am moving. And believe me, it's time to go. The owners are putting the place up for sale and in order to get the remaining issues dealt with, it's better that the house be empty. I found a little place nearby for at least a temporary fix. And it is tiny. It is the smallest place I will have ever lived in. But it's got character, and I can take George and Miss Blackie.

But purging things that I've been carrying around for years is most difficult. I've sold some items, donated many others, and just plain trashed a lot as well. I'll miss so much about this place and the refuge it has been for such a long time for both myself and my husband when he was alive. But I do want (and need) to move on. 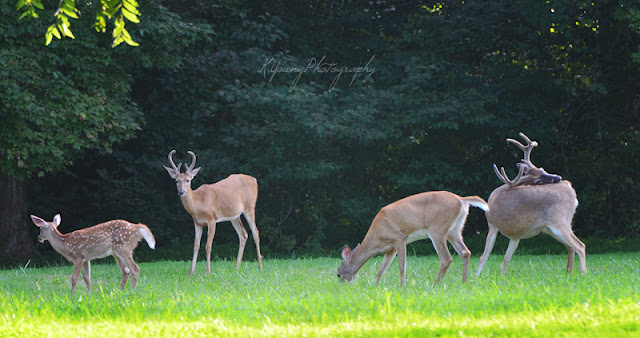 I took the photos above just a few nights ago. This little family of deer has been visiting a lot lately and they're quite content here. There are two fawns, a yearling buck, a doe, and an older buck. I won't be getting action like this at the new place . . . it's in a quiet residential area, something I'm going to have to get used to. Prior to coming to the major house, I'd been living on horse farms all my adult life, where open spaces abound. But I can do this (although I don't relish the idea of having to walk George on a leash when he wants to go out first thing in the morning!) 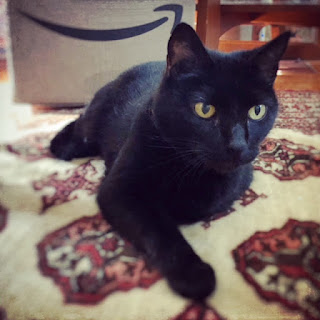 And with that, I bid you adieu. Until next time, my friends.

So I lie to make excuses

No, I don't. It's just that I can't get this song out of my head. The lyrics have nothing to do with me. (I don't lie to make excuses and I don't tend to blame everybody else). But it's a cool tune and right now, this is my current favorite station on Pandora. It's by Susie Suh and there's a link to the song at the end of this post.

It's a chilly day here in Maryland and it's just begun to snow.  My house is a bit chilly too but I kind of like it that way. I do not like when I go to people's houses and the heat is on full blast. This is comfortable and as long as I have on layers and my fingers aren't cold, then I'm good to go. I took the photos in this post yesterday afternoon. It was a beautiful sunny day, although cold. But in the sunshine . . . so good. My good friends from NJ had come to visit in the morning. I can't remember when they were both here together, but it was good to have them here. We went out to lunch later and they headed home from there. 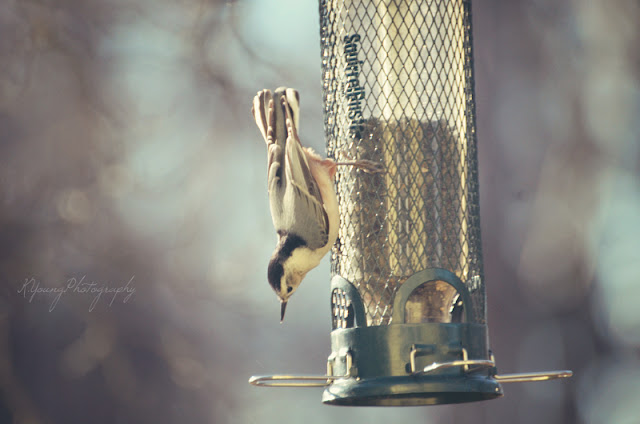 I keep my camera and the long lens by the window in the kitchen. I have a chair there and the feeders are right outside the window. Sometimes I'll walk by like I did yesterday, and the light is just so pretty that it makes me stop in my tracks.

I saw this White-breasted nuthatch land on the feeder and grabbed the camera. 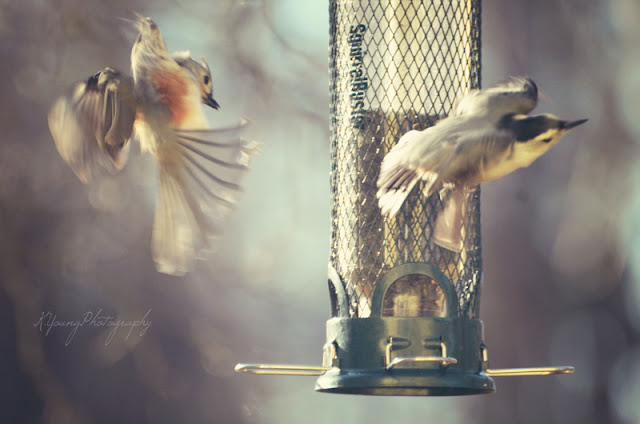 Then a Tufted titmouse came along and shooed him away. 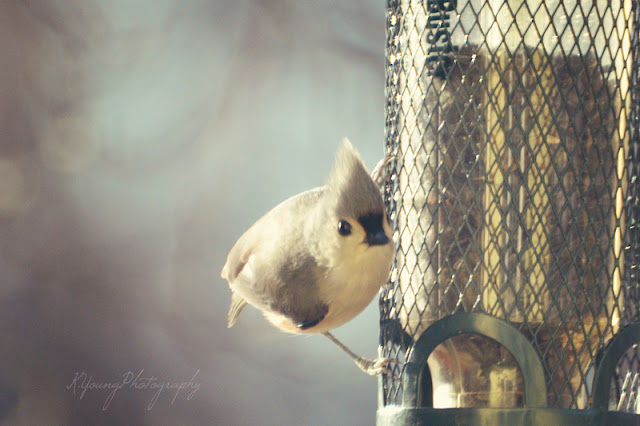 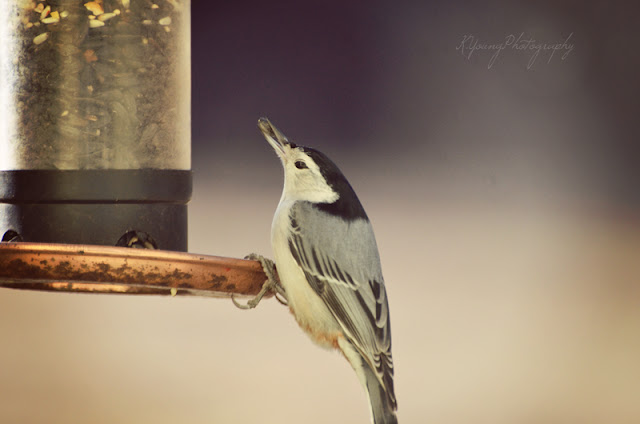 This copper feeder was quite pretty when I first acquired it several years ago. I bought it [here] at Duncraft, but did not pay the price they're asking for it now. Good grief. Since then, the weather and the squirrels have pretty much beaten it up, which is a shame because it was such a pretty feeder. 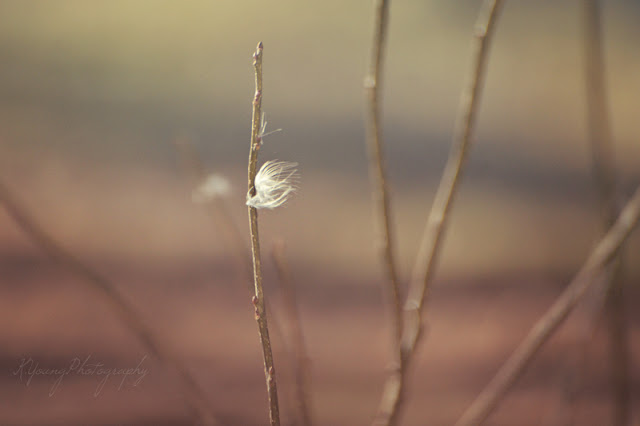 Whenever I see a feather like this, I am always reminded of the Emily Dickinson poem.

I’ve heard it in the chillest land -
And on the strangest Sea -
Yet - never - in Extremity,
It asked a crumb - of me. 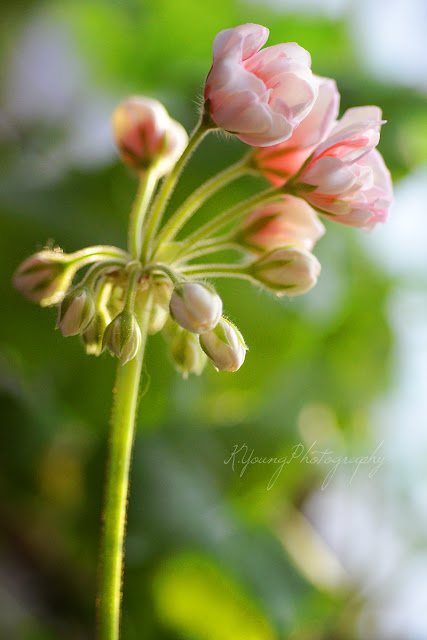 I put the macro lens on the camera just for fun and took some photos of one of the geraniums that's beginning to bloom. I brought all my geraniums in when the weather turned cold and they're all lined along the west-facing windowsills on the first floor.

They're cheerful to see when it's cold outside. 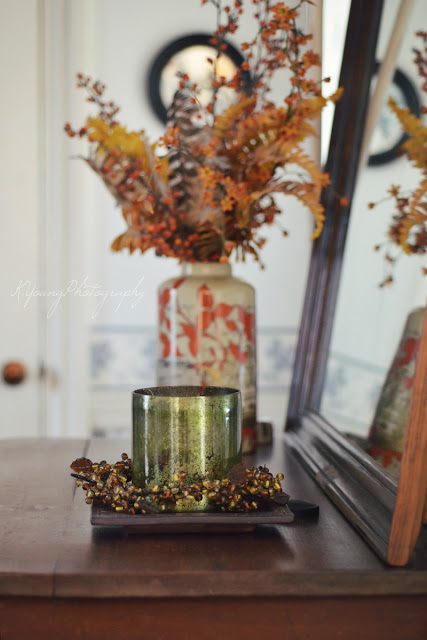 I turned to the left and this is the view with my macro lens. 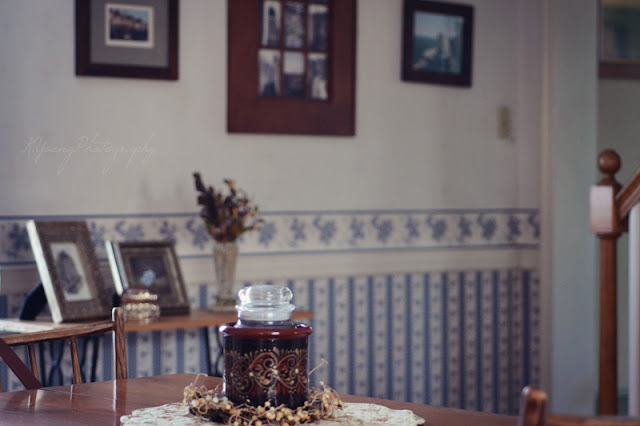 And more to the left. 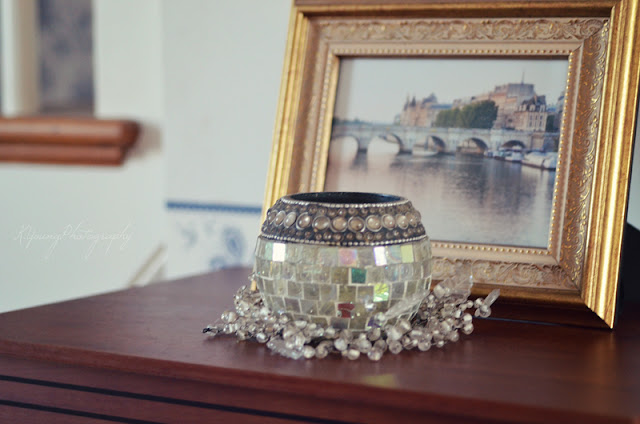 I own several tealight holders and this is my favorite by far. I found it in an interior design shop many years ago while vacationing in Ocracoke, NC.

The print is from a photographer that I admire: Georgianna Lane. Her ethereal Paris photos are simply beautiful and I own several. She always sends extra little prints and is a generous soul. 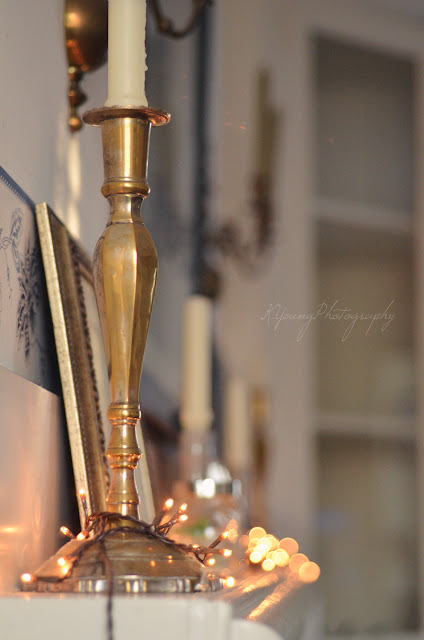 A little more to the left and I see that it's time to clean the silver candlesticks again.

Here's the music I mentioned above.

Hope your Sunday is a good one. Did you notice I didn't even mention the Super Bowl? I mean, I know I should care because our local team is playing but . . . I just don't.

And I'm not apologizing for it either. I do wish them well, though.

Thanks for coming by. It's always a pleasure to see you ~

Visitor at my feeders

Hello and a late Happy New Year to you all. Let me preface this post by saying that if pictures of a raptor bother you, please move on. Hawks aren't everybody's thing but I find them very cool. And interesting. I'm not often able to get many great photos of them but I caught a few decent ones only yesterday.

I'd come home with a small load of groceries and while I was unloading them onto the kitchen counter, I happened to glance out the window to see a hawk perched directly outside on the dogwood tree by my feeders. 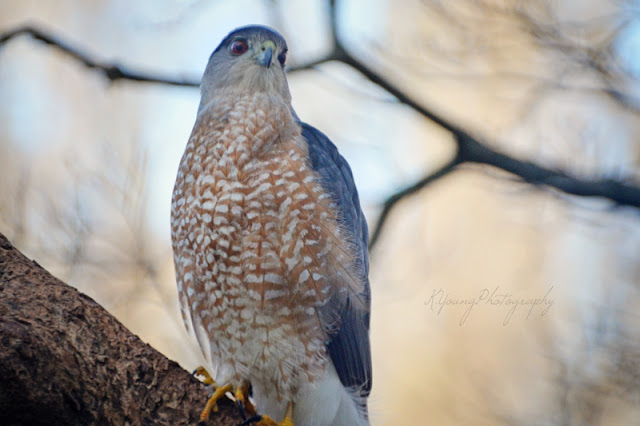 I hunched down in the kitchen and crawled to the window, lest he see me and fly away. I keep my camera there at all times while I'm at home, and I carefully maneuvered the long lens in between my geranium and ivy pots, snapping the few photos you see here. 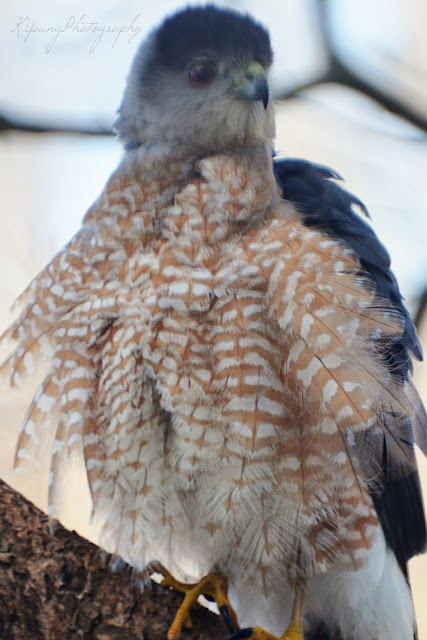 I was greatly satisfied to get one of him ruffling his feathers here.

I'm using the term him loosely, as I'm not sure whether this is a male or female. And I was also having trouble deciding whether this was a Cooper's or a Sharp-Shinned Hawk. If it's the latter, then it's probably a female, as they tend to be larger than the adult males. And this was not a small bird.

I'm going to go with a female Sharp-Shinned. 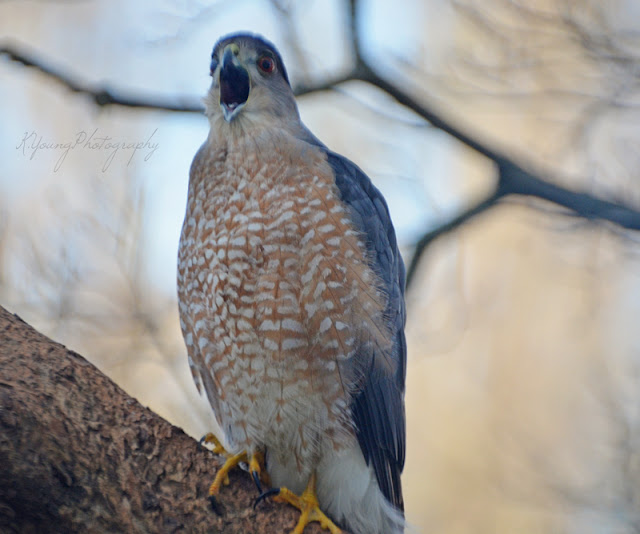 It's not often that a hawk will show up at my feeders looking for an easy meal, but when they do, it's nice to have the camera nearby. If I see this one return too many times, I'll take the feeders down for a couple of weeks as I don't want to encourage this kind of behavior. Hawks will come to backyard feeders but they tend to get most of their diet elsewhere. 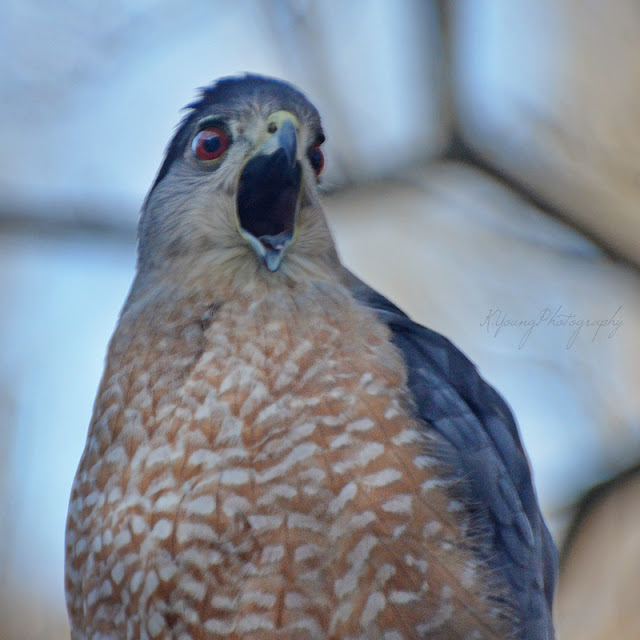 After about ten minutes of being crouched on my floor, I felt the need to get up. And the hawk immediately flew away just as I'd suspected. 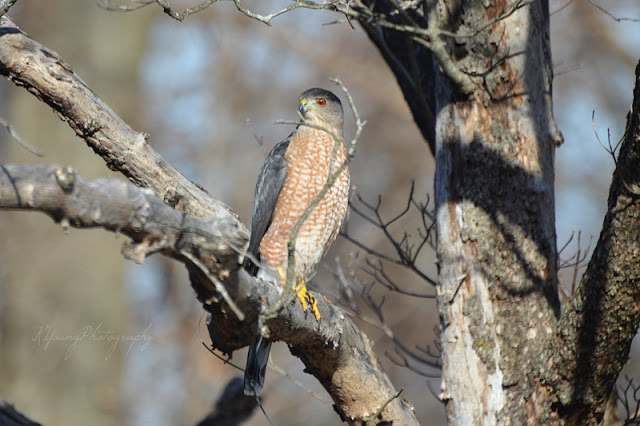 She landed in the dead dogwood tree outside outside the breakfast nook and I managed to shoot this through the window. But I thought maybe I could do better. So I put on my shoes and a light jacket and went outside. It went up to  56 degrees yesterday. I almost put on my flip flops. Ha. It was zero just a few weeks ago. 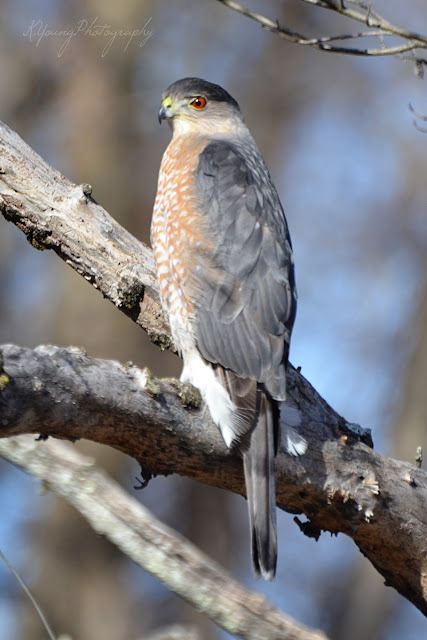 I managed to get close enough to the tree and get a few shots before she flew off. 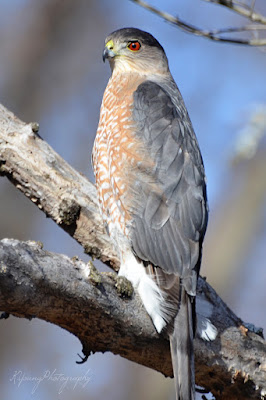 Look at that red eye. 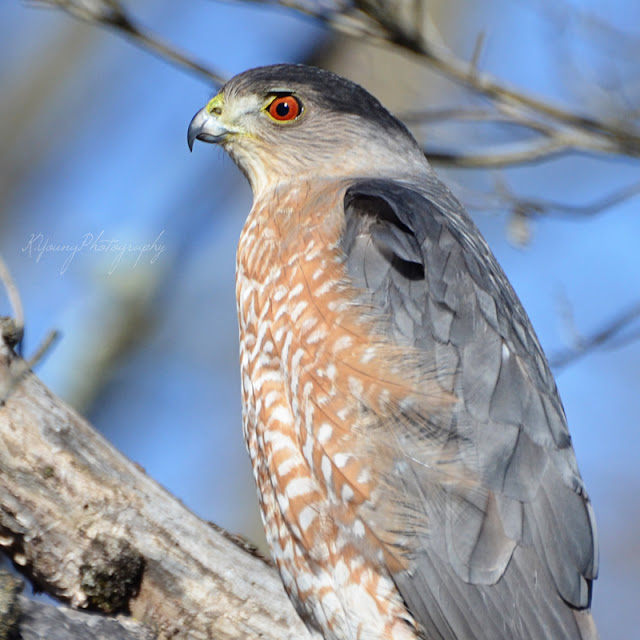 I got almost right under the tree before she departed and was glad with these shots. 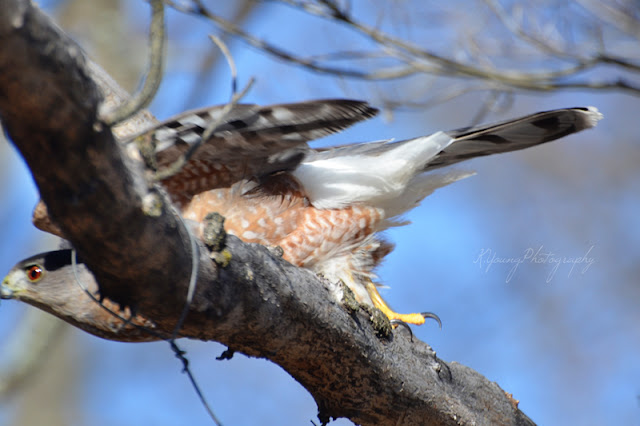 My husband used to get really excited when a hawk would come into the yard.

Or when he would see one along a roadway.

Or whenever he would see one, actually.

So hawks tend to remind me of him. And a couple of things happened after he passed away that had to do with hawks and owls. But that's another story for another day. Suffice it to say that I sometimes think that certain birds (or their feathers) are a sign from the other side.

And on that note, I'll bid you adieu ~

~ along with the wish that your year is one filled with more good than bad.

And I thank you for stopping by today.