So kiss me and smile for me; tell me that you’ll wait for me 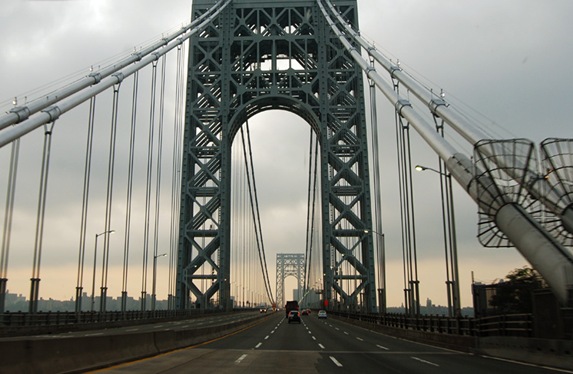 As you’re reading this post, my husband and I (and George, of course) are on our way back up to our beloved Maine. You’re really not that surprised, are you?

When we returned from our first visit in June, I thought that would be it. But my husband was so happy there (as was the dog) that I thought it might be nice to be able to take them back. And so I began to look for places that we could afford because I had another week off that I needed to take before the summer ended.

It quickly became apparent, however, that not only would we never find a place for what we could pay in high season, but the cottages we wanted (on the water) would not take pets. It wasn’t until I contacted a realtor we used a couple of years ago that I began to think that maybe this idea would work. She said that since we had rented before, she could get us into places that didn’t advertise as pet-friendly.

So this opened up a lot more rental properties from which to choose.

Although we prefer Saturday to Saturday, I did find a Sunday to Sunday rental that’s much further from the national park than I would have liked, but it’s affordable. And it’s right on the water. It’s a little rustic but I can handle that because hey . . . (you know what I’m going to say already) . . . we’ll be in Maine. 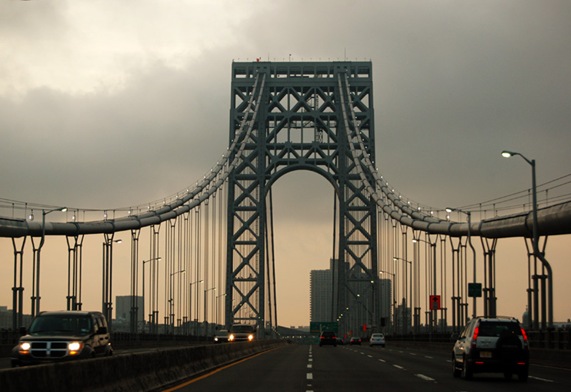 This incredible heat has gotten to my husband. Maybe it’s the whole cancer thing, I don’t know. But I do know that I need to get him away again. Unfortunately, because the place is a bit lacking in the modern technologies, there will be no internet. I think there’s a TV, but heavens knows what we’ll be able to get on it. And there’s no washer or dryer. But hey! There’s a LOBSTAH POT!!!

I won’t be home until next Sunday evening, so there won’t be another post until then. I’ll try to take lots of pictures and hope you don’t forget about me in the meantime.

PS – Photos are of the George Washington Bridge in NYC in the early morning light during our last trip this past June. Traffic was light, which was a first.

Have a lay-back week..and I hope its cooler for you there.
Of course, you will be dearly missed, but I know the posts will be growing inside you and you'll have lots to share..because you love being in Maine :)
Safe travels...

Have a safe trip, and enjoy Maine for the week. We look forward to your return.
Connie

I am smiling so BIG for you! I pray our weather cooperates and you enjoy lots of sunshine and cool ocean breezes! xo ~Lili

Have a great week. Rustic sounds normal to us!

Have a wonderful week! Travel safe :)

Have a safe trip, enjoy, I'm on vacation also, just going to take it easy.

Kate:
Travel safely, have a great time, and we'll wait until you return to hear all about your beloved Maine.
xoxo
Donna

have a great time...can't wait to hear all about it...

You've probably driven right by our exit in Connecticut - 63! George Washington Bridge is brutal almost any time, and so expensive now. But hey, you're headed to Maine!...

Have a great trip, although you won't know I said that till next week. :-)

Have a fantastic trip and a relaxing vacation.

Have a wonderful trip! can't wait to see pictures!
Manden

You'll be missed! Have a grand time and enjoy yourselves. Sounds like an adventure.

Here's to a GREAT week!

have the best trip EVAH !

Enjoy your stay and hoping you have awesome cooler weather in Maine!

Oh I hope you have a fabulous time....smiles.

I did not know about his cancer...my heart hurts...God bless you both...have a fantastic stay! :D

I do hope this trip does the trick for your husband. You too, Kate.

It's been years since I've been over the GW Bridge but I knew it in an instant!

Have a wonderful time!!! It has to be cooler up there, near the water. Take plenty of pics -- can't wait to see them when you return. :)

Think of it as a blessing that the 'cottage' is lacking access to the Internet. We will go through some withdrawals, but I pray that you and your hubby will have a wonderfully relaxing time; and that y'all come back rejuvenated, refreshed and restored! And praying that the weather will be delightfully cool and soothing! Don't forget to take a good book and your camera...and George too...that goes without saying! Have fun!

I'm so happy for you that you will be able to spend another week in Maine...and one when the blueberries will be ripe...:)

We will be missing each other there again tho...:( I won't be going until you are coming back...

Have a wonderful, restful, soothing trip.

Have fun Sweetness! Take lots of pictures and relax! I hope your husband feels better...

Find the coolness in the air...
Retreat to calmer surroundings...
Take a break from modern conveniences...
Snap as many photos as possible...
And most of all,
Love one another!

That's great! I'm glad you'll have the chance to be back in Maine again where your family is so happy! Have a wonderful week enjoying the cooler weather!

Oh I'm so happy for you, Kate. I know how much you love it there. Dip a lobster claw for me, and have a wonderful, safe trip.

Oh have a great time. Can't wait for the pictures and story.

Pray for a refreshing week. Hope it's not to rustic!

Have a great trip! We just got back and it was wonderful. Too bad you weren't up there last week!

Glad you are getting to go back to Maine. I want to go....one day.

I hope you are having a great time!!

Have a safe one! Miss you already. No way we could forget you. xoxo

lol, we probably passed each other on the highway! I was heading back to PA from Maine on the 24th. I wish I could have hopped in your car and headed back that way. I love Maine and miss it so very much.

Glad you could get away. Man, that's an excellent picture of the George Washington Bridge. Mine never turn out well (Daughter lives in Rye so I am there alot) Have fun this week.

You all have a GREAT time - can't wait to read all about it (and see your photos)!

I'm thinking of all the George photos you will have to post for us when you get back. And Maine photos also... The heat takes a lot out of a person and you all have had more than usual from what I've heard on the news so to be able to get away from it for even a week is wonderful. I'll be looking forward to seeing the pics and stories you bring back.

as if we could forget you... have fun enjoy the time away from the net...

First time to your blog and it is grand!
Those pictures of the GW bridge are awesome.

Hope you have a great time in Maine.

Cindy
my journey through life after the loss of my son, Joshua.
treasuresinmyheart.blogspot.com

This song gets stuck in my head every time I pop back here to see if you are home yet! Hope you had a blast... or at least a nice relaxing time.
:-)
BB

I definitely won't forget about you :) Have a great time! Can't wait to see the pics and I hope 'rustic' isn't too rustic ;)