I took these last week on the way to my sister’s house. They were shot through the car windows while driving. And I was the driver.

Now before you go getting your panties in a bunch, let me tell you that I was either driving so slowly that the car was almost stopped, or that I had stopped behind a buggy to catch it in motion. I don’t recommend driving and shooting at the same time. It’s just too dangerous. 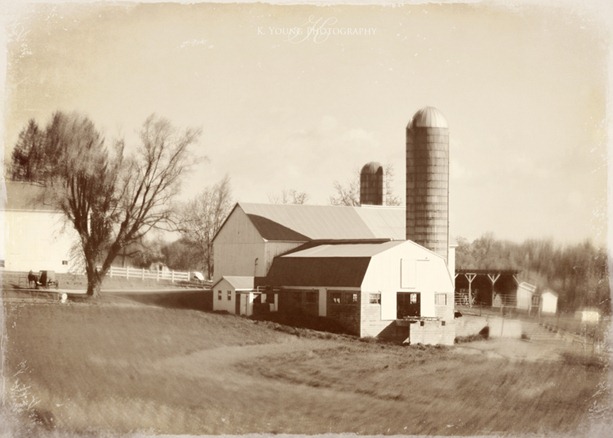 These photos were taken along State Route 74, around the village of Brogue, PA. 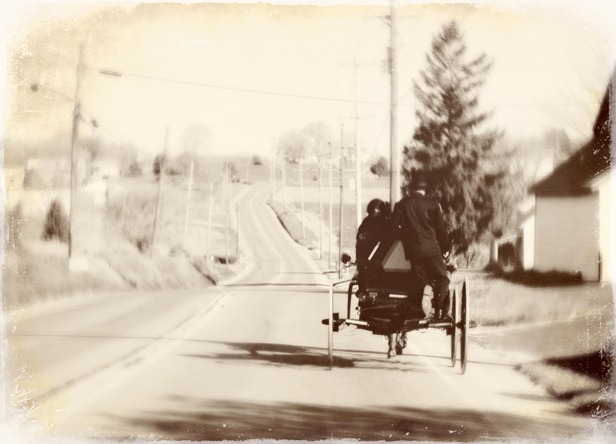 It was early on a Monday morning and Amish were out and about in their buggies. It looks like there wasn’t enough room for this passenger in the photo above because he was standing on the back. And as I drove by, I saw that it was a young boy. 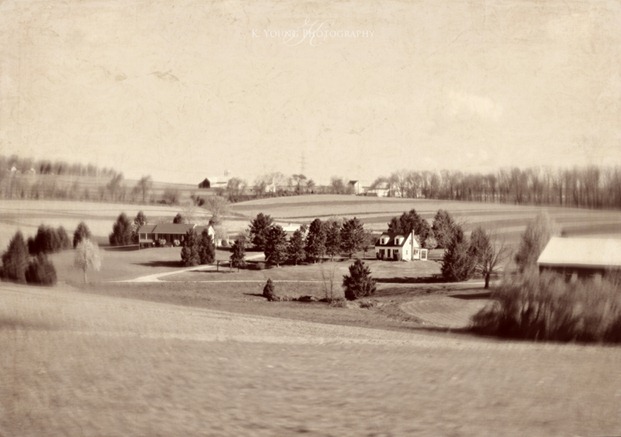 I love the rolling hills on this route that I take to my sister’s house. I could take the highway, but then I’d miss all this beauty.

And that’s no fun. 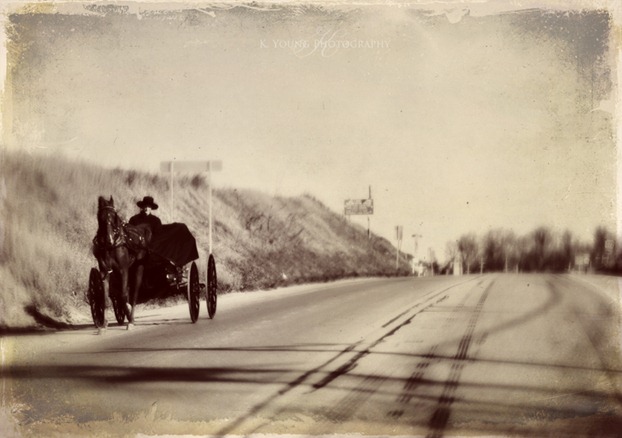 The boy driving this buggy saw me with the camera, and was actually smiling at me. I didn’t notice it until I was editing the photos. 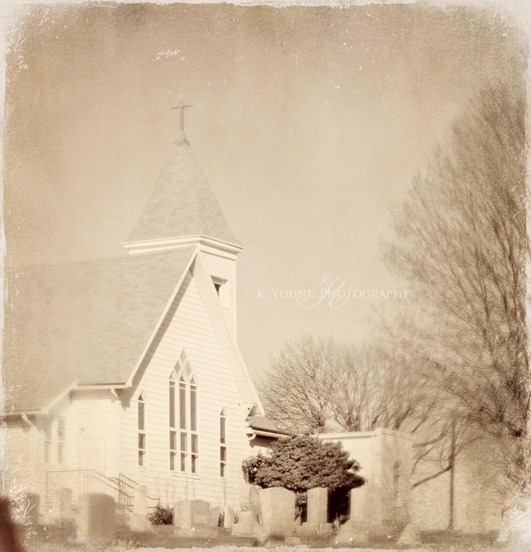 I was in a dreamy, old-fashioned sort of mood when I processed these and ended up using an action called Tinto from the Chunfen set at K. Miller. I was looking for blurred edges with a sweet spot that I could add myself. After that, I chose a B&W action called Dy-No-Myte from the Vintage Soft Tones set at Red Leaf Studios. To finish, I added some texture to the images to give them an aged look.

Are you still awake? 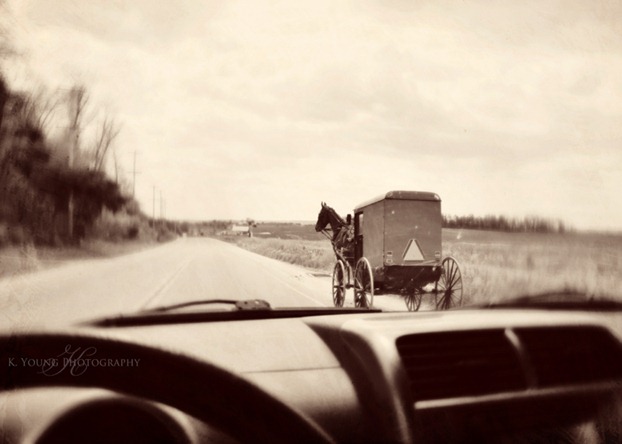 For some reason, this one’s my favorite.

I was thinking of hosting a couple of blog friends at my house next month with plans to head out to Amish country to catch some shots. I’m kind of excited about actually having people here but it hasn’t been set in stone yet. So we’ll see.

I had mentioned that I had a sleepless night this week and got so many people letting me know their little tricks for getting to sleep and staying asleep. This natural remedy from Dr. Oz looks rather interesting to me. A co-worker told me about it today. {Hi, Margie!}

It’s been a busy week at school and I’m thankful that tomorrow is Friday. Today our Upper School students performed in a Talent Show and there’s more to come tomorrow. It’s always so wonderful to see them perform. And I believe I got several good photos.

Take care and thanks for coming by today ~

I am fascinated by the Amish people and their lifestyle. Lucky you that you have a community so close by.

Love the photos too!

I was having dinner with friends a couple of weeks ago and one of the guests was telling us about visiting with an Amish family when they were in Ohio recently. Apparently there is a way to "make reservations" with an Amish family to go to their home and have a home made dinner with them. Kind of like going to a restaurant, but you are going to their home. They said it was wonderful with foods that mostly came from their farm/garden and the opportunity to ask many questions about the culture. Sounds like fun, doesn't it??

LOL...yes, I am still awake! But you know, I am a PS geek. God, you should have seen me the other day...took 2 hours to learn a couple of new brush tricks...but OMG!!! Cooolness. Now I know about 8% of what PS can do! LOL. I see why that last photo is your favorite...love the mix of modern and old world.

We have lots of Amish farms here in the area as well and they go door to door in our village to sell their fresh produce its wonderful , it was an Amish family buisness that built Papa's work shop . Fantastic photos ! Have a good day !

Oh, I love Amish country.....my daughter went to school in Reading, so we spent some time driving around. It was lovely.
don't blame you for driving that route.

and speaking of which.... long live Prince Ambien.... seriously :)

i adore the way you processed these...perfection!

These photos are so dreamy! Love the processing you used. I still have never tried using actions...it just seems like I never find time to give it a try and I blame it on my slow computer. These photos remind me why I want to try!

The photo processing is just perfect for these! And you better start setting that stone ... cause I'm coming!

you can't post badly
even when you're being bad
LOL!

Loved this....as USUAL. How DO you do it again and again?

Awake? Do you se what time it is?
:) I like the last one, too, and all of them look like they could have been in Grandma's photo album, except she didn't live anywhere near the Amish---I've never even been my self...and I'd love to.

I see you've gone and assumed we're ALL wearing panties, Sparkle-Girl! LOL! (I KNOW I am!)

These are really lovely pictures, I love the way you have put them into sepia, it totally goes with the horse and carts and makes it all the more fascinating.

I was born in Warren, PA which is close to Lancaster county which has a BIG Amish community. I love your photos, remind me a lot of images I saw growing up! Love the old time effect also!
I think a blog get together to take photos in Amish country sounds delightful...I am so sorry I am I am so far away or I would be begging for an invite ;-)
Have a great weekend my friend!!!

Lovely photos, the processing is gorgeous! Here we have both Amish and Mennonites, but they strictly forbid us from taking their pictures. :( It's a shame really because it helps preserve their way of life for future generations to see, especially since so many are moving to less crowded parts of the country.

Those are great pics. Love the colors and I agree with your favorite.

Oh Kate, these are beautiful! Thank you for explaining the editing process. I will have to try that soon.

And I'm wondering if I dare try the "rice footsie." My husband might just die of laughter...

Have a wonderful weekend. Gotta go vacuum -- Liam's girlfriend is coming tomorrow. Darn, I thought maybe I could get away with skipping a week!
xoxo

i love amish anything.....although my patience would wear thin if they slowed me down on the road....i'm a nasty driver that way :(

Really beautiful. I especially love the rolling hills and church shots. Have you tried the droid app called "LittlePhoto". I love it and use it all the time. If you're not already using it you might want to give it a try. I think they have both a free version and a paid one. I'm using the free one right now and it works great.

I think the horse in that last shot has its head turned ever so slightly and it is thinking 'Am I seeing things or is that woman actually taking photos while she is driving?' Horses are smart you know Kate and that one is right on to your game.
Ms Soup

Can I come for a visit? *sigh* Would SO love to photograph these sights... do they mind being photographed?

I've always wanted to visit Amish Country! Thanks for taking me there today!

LOVE the photos...I think what you used in processing them went perfectly for the subject(s) being photographed. Thanks for sharing!

Awesome blast from the past.

The images are as timeless as the people themselves. Wonderful!

I love these shots of the Amish. The processing is perfect for this subject. Thanks for sharing.

Love all of these shots. They are so fascinating and have a lovely dreamy quality to them. xo ~Lili