I spent the past day or so editing pictures taken while I was visiting NYC last week and I have a few here to share with you. My goal was to create a video using images taken in the city but it is a huge task, especially when I took 400 pictures and need to edit each and every one. I edit all of the photos you see here because . . . well because they need it. And because I want to.

So without any fanfare, what follows is a hodgepodge of images that I hope you’ll enjoy. 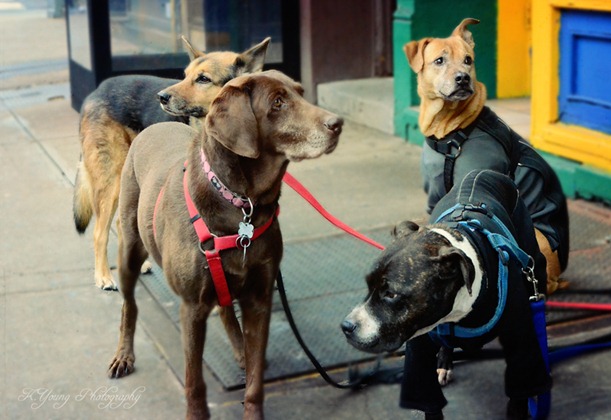 I’m starting with this one because for some reason, it’s one of my favorites. This canine quartet was waiting for their owner (or walker) outside of a restaurant in the Upper West Side on Amsterdam Avenue. I like everything about them from the mix of breeds, to their attire, but mostly to the expectant and beautiful faces. 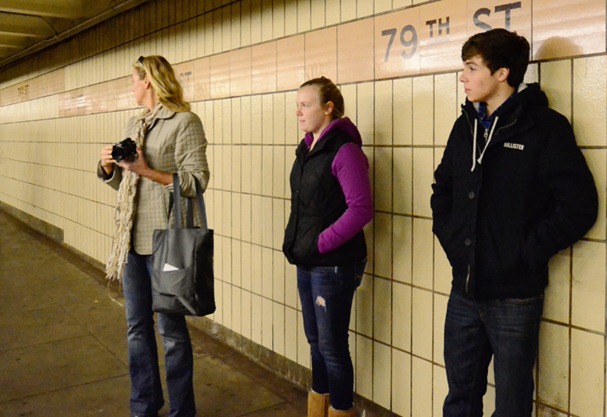 My blogging friend, Janice, and her family waiting for the subway.

They had just gotten into town. 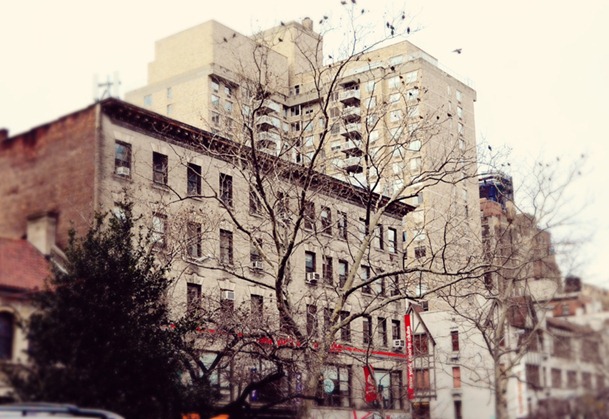 I took this because I thought the birds on the branches looked like ornaments on a Christmas tree. Beautiful. 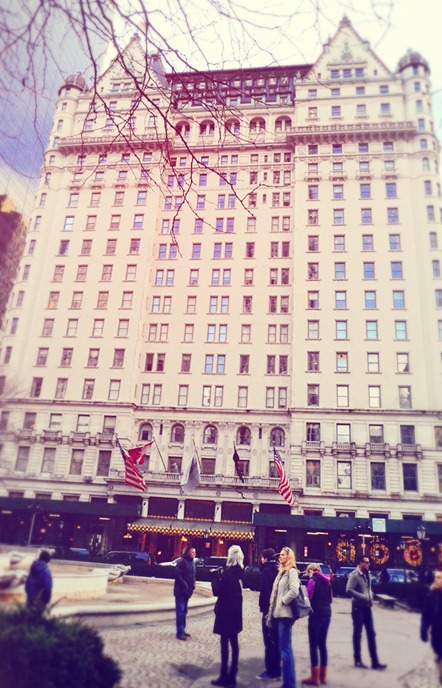 And speaking of beautiful, this is The Plaza Hotel. Click on the link below to their home page and watch as day turns to night at The Plaza. It’s pretty cool. 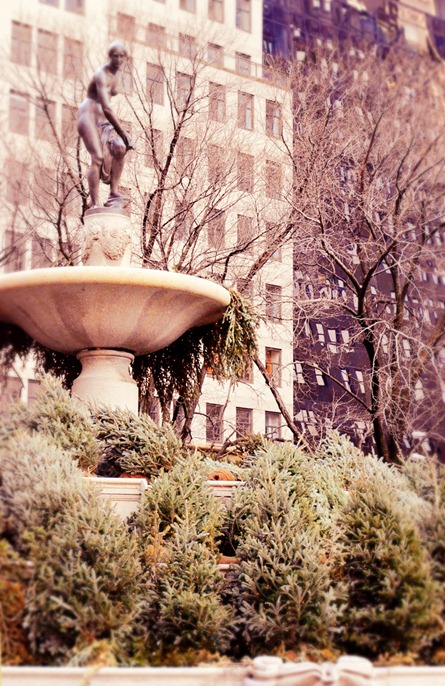 A fountain outside The Plaza Hotel.

The little trees were lit up but you can’t tell from this image. 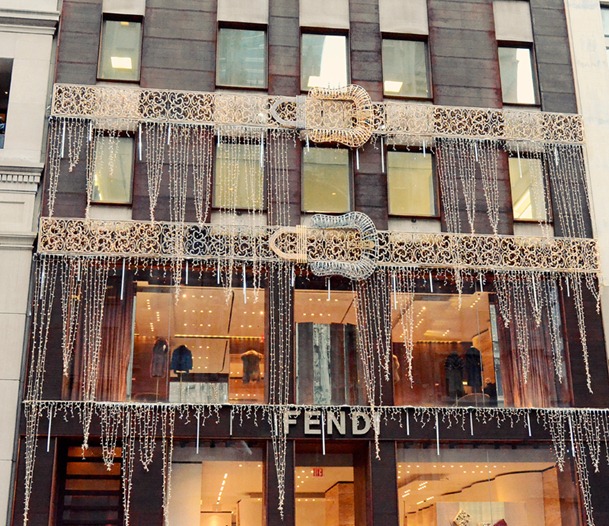 Fendi on Fifth Avenue, all dressed up for the season. 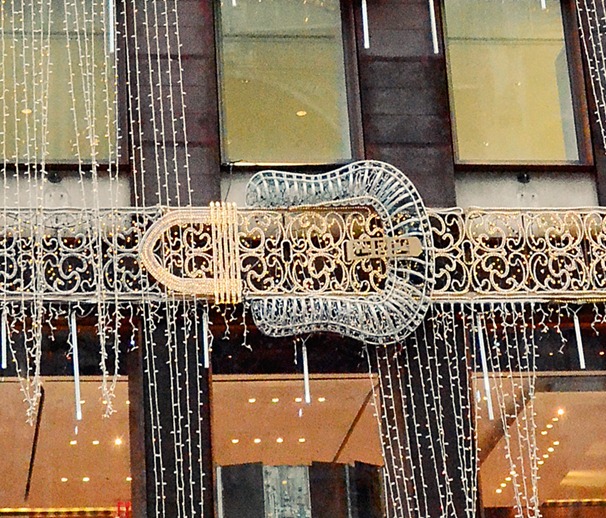 We did some window shopping along Fifth Avenue on our way to Rockefeller Plaza before we went to the Top of the Rock. The windows here are nothing short of amazing. 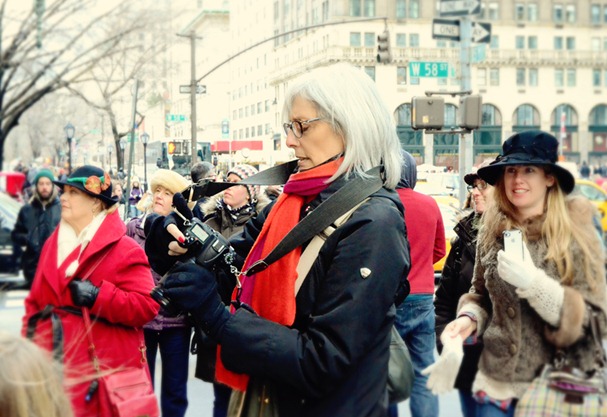 My blogging friend, Daryl, taking images of the windows.

The streets were mobbed but we did just fine. 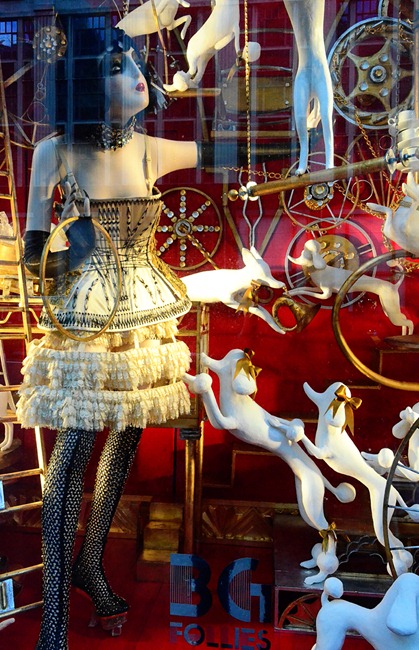 One of the windows at Bergdorf Goodman. 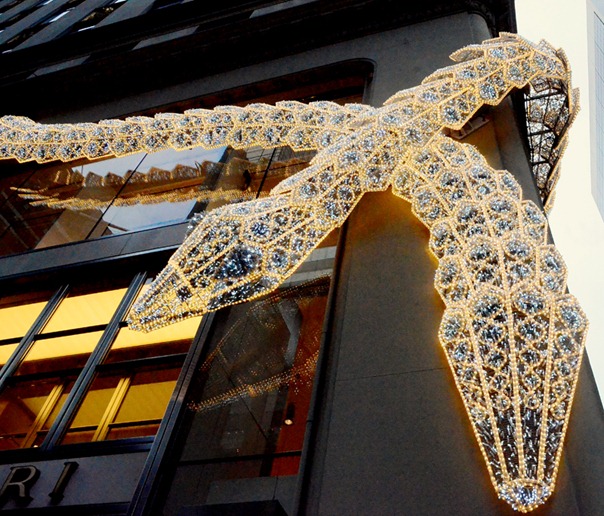 Bulgari had a huge diamond-like snake wrapped around their building. 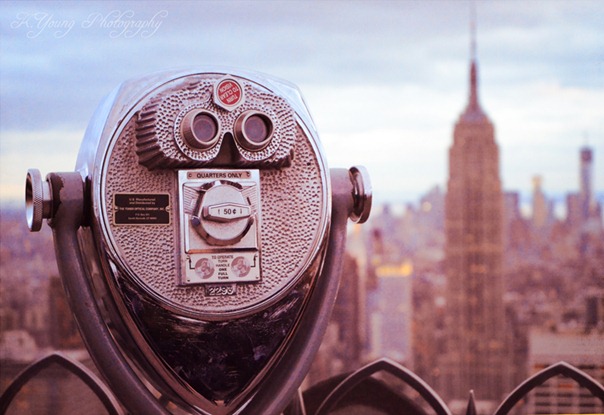 Taken from the top level of the Rockefeller Building just before sunset. I edited this image  (and the ones from The Plaza) using a free action I just found on Mandy Faith’s blog. It lends sort of a pastel and pinkish glow. 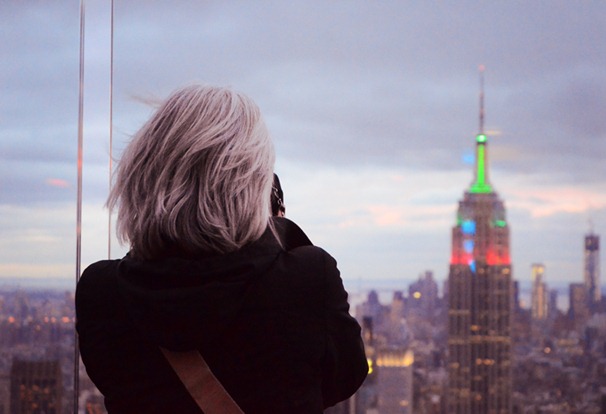 Daryl using her new camera to photograph the Empire State Building after she had just willed the lights on it to come on. I think I had more hits on FB on this image alone than any other that I posted from my trip to the city. And it’s one of my favorite shots. 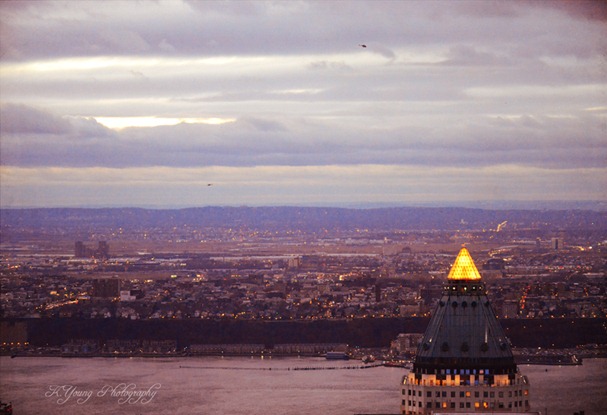 Westward view from the Top of the Rock overlooking the rooftop of the Worldwide Plaza. Thanks to Daryl for pointing out the name of the building to me. 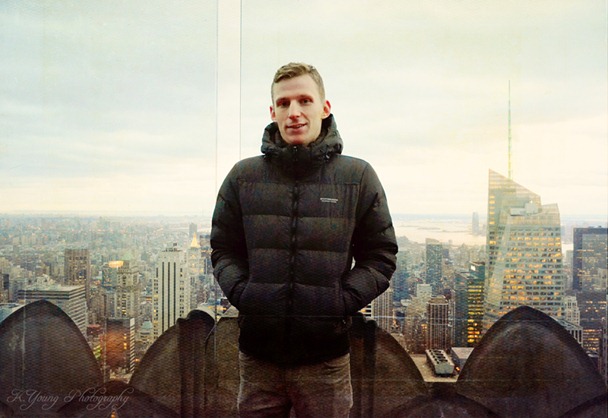 My son, Matt, who lives in the city.

Oh! There’s his apartment, down there on the left. Somewhere. 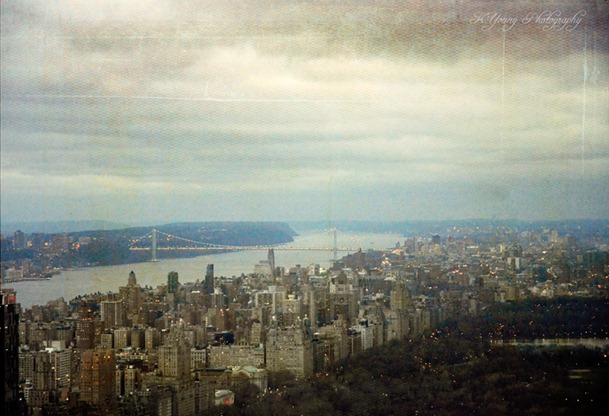 The George Washington Bridge with its lights glowing. Central Park on the right. 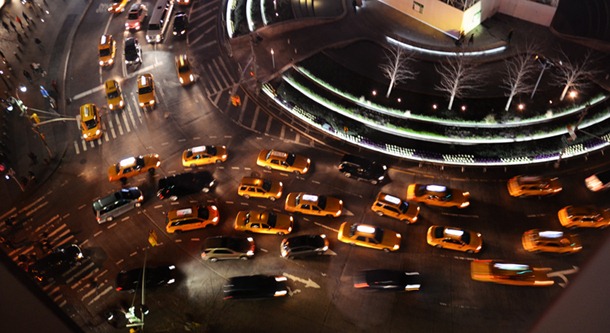 View from our window table at Robert, on Columbus Circle. So many taxis ~ 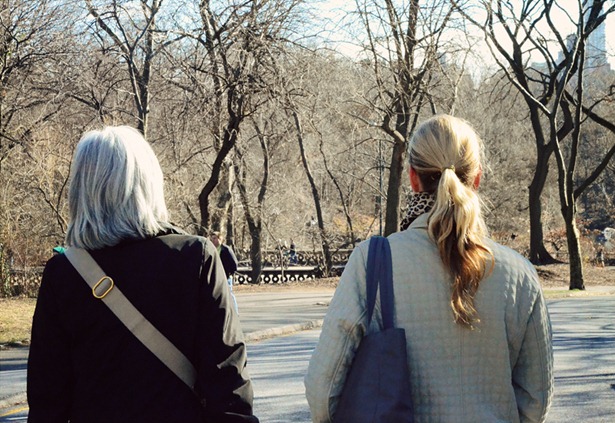 A short jaunt through Central Park near Strawberry Fields. Janice had never been to the park, so it was a must, just to do a quick visit. I love love love Central Park.

and I hope you enjoyed these images. Thanks for stopping by, my friends.

Fantastic photos ! Thanks for sharing with us. Hope you guy's have a Happy New Year !

I have enjoyed taking a little trip to New York through your photos! Your photos capture the beauty of the city and my imagination!

Wonderful photos, Kate! Thank you for this trip through NYC through your eyes!

It was so much fun!

oh honey! I'm gonna have to come back with a cuppa and really enjoy this again later today...Thanks.

smashing pic of Daryl! and ALL sparkled in your eye. "I WAS there"

That first photo is my favourite too! What great characters they all are and what earnest faces. Boy, the sure go all out with decorations in the Big Apple.

oooh, I LOVE this collection!! Especially the dogs... and Daryl with Empire state in background... and the GWB!!!!.. I went over it several times in recent days for funeral services for my Aunt. Sad times, but the view of the bridge and of the city at night FROM it.. are beautiful.

Kate, these are absolutely wonderful photographs, but hands-down, the one of Daryl photographing the Empire State Building is my favorite. That is really, really a great photograph.

I feel so fortunate to have met you here, and I wish you and your family a very Happy New Year.

Great photos, as always ~ love them! I went into NYC in October and didn't go back in for Christmas so I enjoyed being able to see what I missed, lol. I actually walked around that same bit of Central Park where you were when I went; I'd never actually been through until this year and I loved it.

Best wishes for a happy and healthy 2013 to you, your husband and George! :)

See you on the other side :) xoxo

One of these days I'm getting back to NYC .... visited once when I was 18.... never though I'd go back but you INSPIRE me :)
Looks like a FABULOUS time with friends - no matter where you are :)

Yup, the picture of Daryl taking a shot of the Empire State Building is my fave.

OMG...I seriously feel like I was in NYC just now! These photos ROCK. I do love the doggies too...and the outfit on the pitbull. Too cute. And wow that jeweled snake on Bulgari's...holy cow, I wonder how much that cost?! Well, I wish you a very happy and blessed NYE! xo

Love the photo with all of the taxis below.... honk honk honk.. okay, so they don't do that in NYC? Well, that's what I hear.

Yes yes yes I enjoyed your pictures very much! Happy New Year to you and your family Kate. I'm so glad you get to NYC fairly often, it's always alot of fun to get a glimpse of your trips there. xoxo

oh enjoy i did !!
thanks for taking me to NYC from the warmth of my couch :)
xxoo

ps...it is wrong of me to hate daryl for having such great hair ?

I've seen some of Daryl's photos and now, with yours, I'm so jealous of your time in NYC! But also happy that y'all go together and shared the visit with all of us. Wishing you a 2013 full of blessings!

Every Passover we Jews cry 'next year in Jerusalem' ... well, now we have blog friends have a cry: 'next year in NYC' .. our new December tradition ..

Happy New Year to you ... loved the photos especially the dogs.

Central Park is truly an amazing chunk of real estate in the middle of a metropolis! I never really had a handle on its reality before I started following your blog....

Whenever you visit NYC I feel like I've been right there with you...gorgeous images, each and every one!

What a beautiful city. Reminds me of something I read about Woody Allen once, that he loves NYC so much that all of his movie scenes shot there have that "glow" to them, like your photos.

Oh Kate, I'm kicking myself for being out of the loop...I've missed so much on your blog. I smiled through the entire NYC tour...loved every single photo. The decorations...belts, buckles, snakes around buildings...over the top. A great post! Hugs to you and yours in this new year!

Great pictures! Made me miss The city more than in a long time. Thanks for sharing!

I was going to say I love the dog photo the best, but then I scrolled down and saw so many other great shots too! I love your blog, your images, and your words. Happy 2013.

Hello! I'm at work surfing around your blog from my new iphone! Just wanted to say I love reading your blog and look forward to all your posts! Carry on the great work!

Hi I just found your lovely Blog, Happy New Year to you I love the photos you have taken.


sxaz [url=http://www.bootssay.com]cheap ugg[/url]
On the other hand, he didn't so competent by the end of the time, to never promote a couple Women Shoes or boots. Nonetheless, he didn't lose heart, even some persistent that could be successful. He was believing that, in the usa marketplace there'll go for his footwear. So he made the decision to visit free airline to Ca to get possibilities.


ykwh [url=http://www.bootswould.com]cheap ugg[/url]
Criminal sun glasses are in fact a product of developer shades. Most people though consider these mirrored sun shades as secret agent sun shades as they is able to see your eyes when they provide credit. For that reason other product strategy whether you're observing what they are carrying out if you are using this type of glasses. They permit you to traveler on some others and view the boys and females without realizing.

Wow, I bet those buildings were amazing all lite up at nite.

Sorry to be MIA. Was out sick, then family. Don't computer at home.

Since the Honda Element is so smart it found it's way back to work today after being off for 14 days.

Love Central Park too.....also, I have never found a replacement for NYC at Christmas......ever......so glad that you had a good time!....smiles

We must have similar tastes. My favorite photo is of Daryll and then I love the dogs second. Hah! Looks like such a wonderful time with people you care about. Hope you had a great New Years!

I always love your city photos. You turn them into magic. So wish I could have joined you all. Miss you.

Wonderful photos of a wonderful getaway...wish I could have been part of it:) That picture of Daryl on the top of the Rock is fantastic...and I do love the processing.

Oh I do hope you have a good year, Kate! May it be happy and peaceful...

Loverly! As always. Here's to a wonderful New Year for you and yours - heck, for ALL of us!

These are a beautiful series of photos. They certainly tell a very good story.