I heard a noise at my window the other day. It was a cardinal who was attacking the glass. Behind our flat screen tv, which is set at an angle in front of the window, we have poinsettias that are still in bloom. Outside the window is a huge bush and in that bush lives a cardinal and his wife and, I’m sure, a nest with eggs. When I realized what was going on, I went for the camera and recorded the following sequence of events which only took a few seconds.

I’m not sure whether this was related to rivalry on the cardinal’s part or if he was just feeling good on a lovely sunny afternoon in very early Spring. 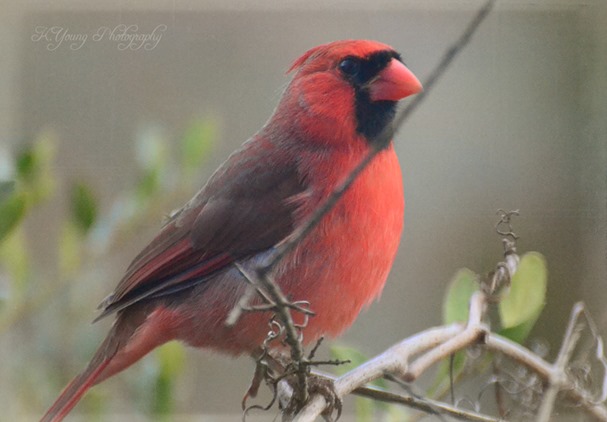 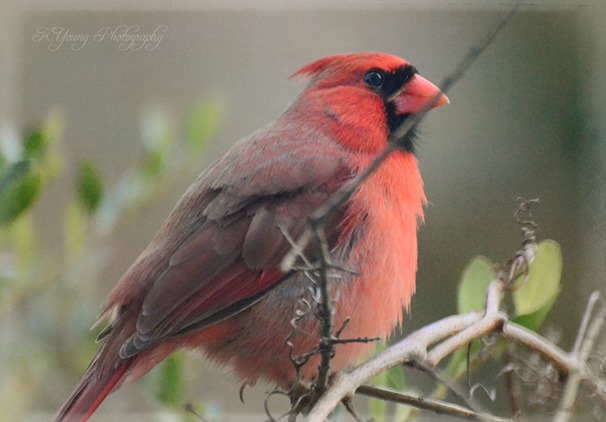 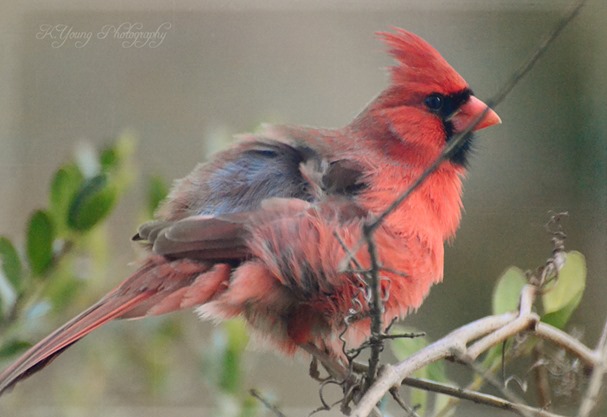 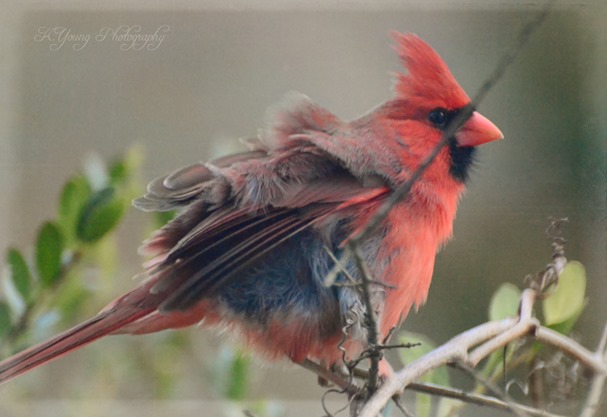 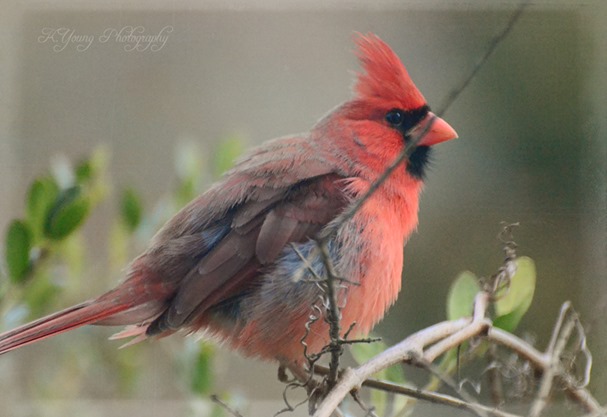 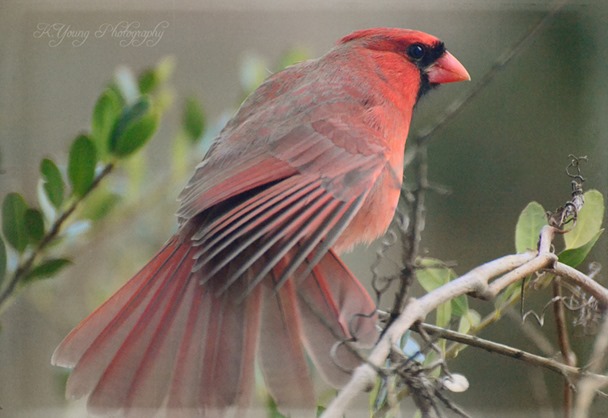 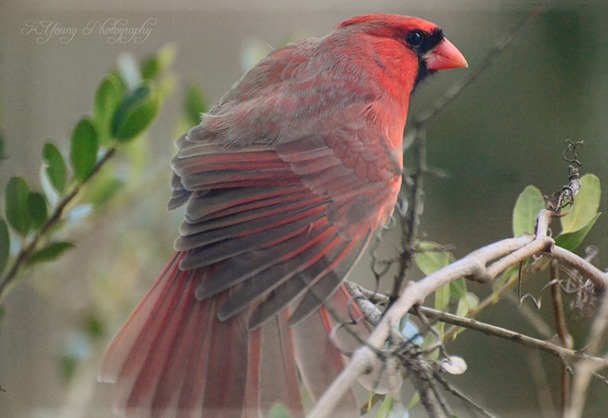 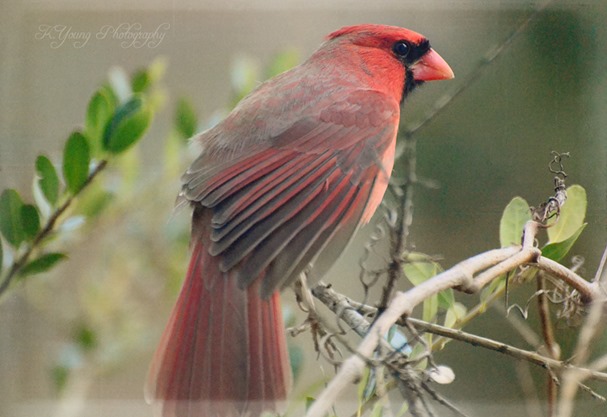 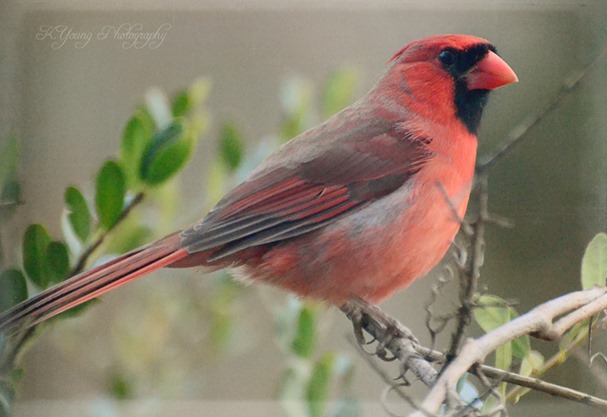 I felt like a voyeur, but was glad I had the camera. I want to print the 7th one down and put it in a frame because I like it so much.

Hope you did too ~

Goodness. I have a pair of cardinals out back and no telephoto. I'd love to capture them, but alas, I'll enjoy your shots. Great job.

I did too, of course! I love how in the seventh one his tail feathers are spread open too. Beautiful!

We used to have a bluebird at the farm who would attack the mirrors on our truck thinking it was a rival...so maybe he sees his reflection and gets all puffed up? I love that 7th image,it would make a wonderful print!

Oh so agree, that 7th one down is definitely a winner. Makes him look like he has his royal cloak wrapped around him. Beautiful!

Oh yes! The 7th one is so neat...I can see right through his wing!

Kate,
these are just wonderfully fun. I never would have thought he had blue feathers under all that gorgeous red. Great captures and I can see why you want to frame the 7th. Quite unique
peace,
CheyAnne

My favorite is #6, although I loved seeing all of them!

I'd love to be able to capture that! Awesome job!

Didn't you know i had to go back and count down 7 pictures to see which one you were talking about. Can you just picture us all doing that?? Are you laughing??? LOL! Hugs! deb

nice series to put in frames down a long hall.....

As you know, the cardinal is my favourite bird. I have a small ornament, which I bought in Alberquerque some years ago, after I had actually seen a cardinal.
I would like to see the whole sequence printed out and framed in a long, vertical frame - they are exquisite.

Wonderful. Cardinals are the favorites in my house and especially in my parent's.

What fun! The cardinals are so entertaining. Here, I watch while Mr. and Mrs take their daily bath! Great shots.

Gorgeous bird !!! What great photos you take ! Hope you have a great weekend !

Stunning results from spying on your neighbor.

Lovely photos ! My in laws live next door and there is a Cardinal spring that admires himself in the side mirror of his truck as it is parked in the driveway near the hedge , it is funny to watch as he has quite the conversation with him self in it lol ! Mum used to have one tap on her kitchen window every spring as he sat on the outside window sill . Birds are funny and have quite interesting characters . Have a good day !

Oh Kate, these are so wonderful! As others have said, they would look great in a series of framed images. And you should do a bird calendar next year, too!

Snow tonight here. How about you?
xoxo

I swear he knows you're there and is smiling!!! We have the brightest most beautiful one who comes to the feeder...he must be young because there isn't a mark on him...unlike the others who have bits and pieces missing...and the female is always there waiting for here king to finish!!! I would love to get a shot...but ...
hope it doesn't snow too much on us...unless you'd like a snow day!!

What a beautiful collection of shots of the cardinal....I am with you on the 7th shot; amazing.....

He certainly seemed to be posing for you....lucky girl...

Wonderful. Very rarely do I get to see a cardinal. And when I do it is for a very brief moment. Beautiful.

Kate, these are wonderful.
I love the way you were able to capture him while he was stretching his wing.

I hope you've had a great weekend, and I wish you a wonderful beginning to your week!

Wow, stunning shots!! He certainly had his feathers ruffled over something? Are you sure there wasn't a cat close by!! Great idea on framing one, he is a handsome fella!!

Really good shots. Our yard is loaded with them this year. I think it's the most I've ever seen. And the stinkers love to steal cat food.

I just love these!!!