We finally have some blessed relief from the oppressive heat of late. It came in the form of thunder and lightning and a little rain last night.  The thunder wasn’t too loud but I’m sure George would beg to disagree as he was glued close to my side all evening while I continued to watch the first season of Call the Midwife. OMG – I love this show. Cannot believe I hadn’t viewed it until now.

Any time spent outdoors lately has been pretty horrible and I’m grateful that we have some rooms air conditioned here and that I work at a place that is kept cool.

This morning I woke early and spent a little time on the back patio enjoying my coffee. I haven’t been able to do this for weeks. The sky was full of clouds but I could see patches of blue to the west. I played a little frisbee with George, then sat down to take some photos with the long lens. 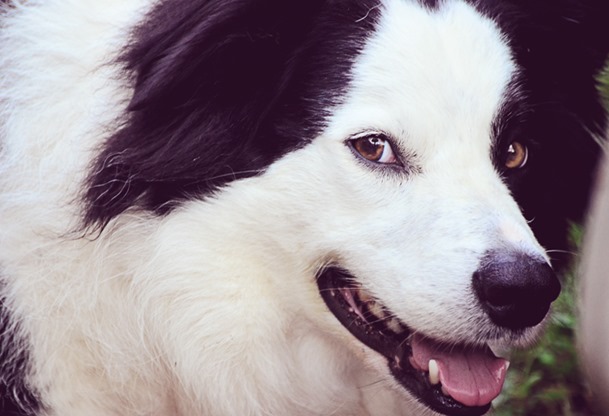 George has adapted to things that have been going on here lately, specifically the fact that his master isn’t the same anymore. I love this dog because he is a gentleman, and because he knows when to back down (always). It’s sad but he doesn’t look so sad, does he? He’s fine. I should take him for more walks. I know I should . . . 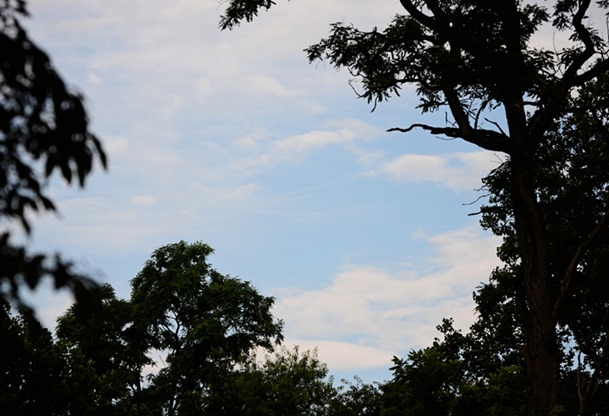 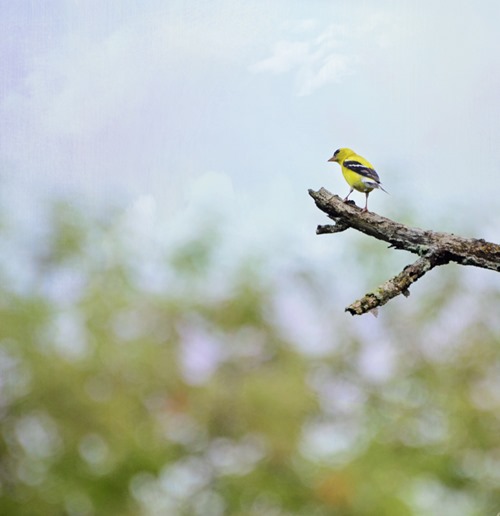 Even the birds are happy. 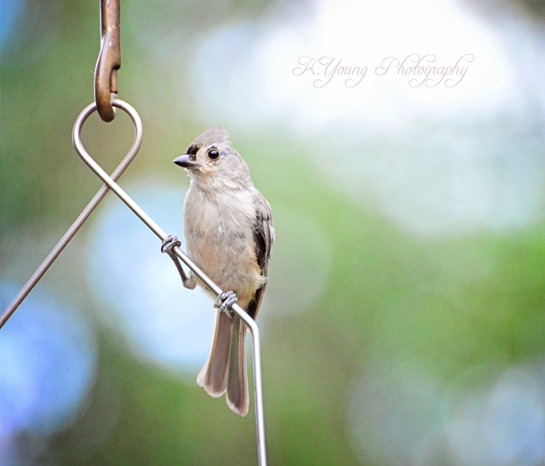 I keep the feeders full and the birdbaths fresh. 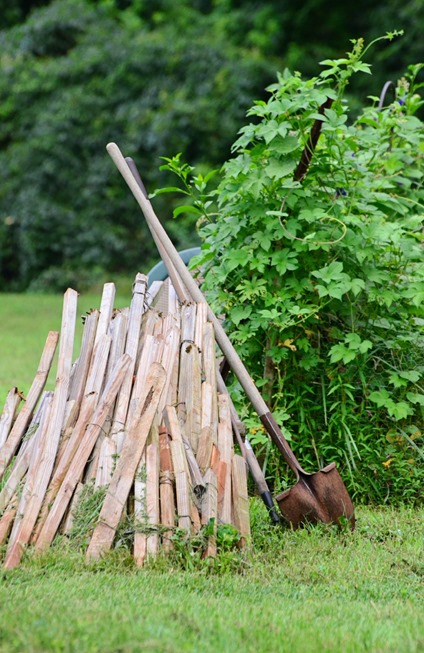 And some day, I’m going to ask my son to help me move this pile of garden stakes along with the old spade and hoe. I left everything the way it was on the last day my husband realized he could no longer work in the garden. I think it was at some point in April. He had planned to stake all the tomatoes (a huge job) and I’ve left it where it’s been partly because it looks like they’re ready for him to come outside and use them. I mean, I know that will never happen. But it looks like it could happen.

It’s not denial. I’m just selective about the reality I accept.

As for the tomatoes . . . they’re in the garden under the weeds somewhere. I had to give something up and it was the tending of the garden. I just cannot do it all and gardening is at the bottom of my list right now.

We’ve been enjoying some delicious sweet corn and cantaloupes from the farm stand down the road and last night for dinner, I made hot dogs and corn on the cob. Haven’t had hot dogs in a couple of years and they were great. I added some cheese and diced onion and kosher pickles.

Here’s to a good week ahead. My new sofa should be here by mid-week, too. Woot!

I'm sorry how hard it is on you and George. Seeing someone you love change so much is never easy, both of you are handling it as well as you can and that is all you can ask of yourselves. As for the garden, I'm glad you let that go, you have a full plate and then some, something has to give and you can't do it all. Keep your chin up and try to stay cool in all the heat and humidity. Big Hugs!!

I feel such strength and love in you.

Life is all about priorities and changes. As much as we want things to stay the same, they don't. They can't. I'm really sorry that your changes aren't happier. Sending hugs for all of you today.

A nice upbeat post dear blogging friend - Be strong, and love that dog, he looks such a comfort.

So glad for the little things like sofas coming when they should. Love this: It’s not denial. I’m just selective about the reality I accept. B/c honestly, that is how we must push through at times without being overcome.
Hugs to you and yours.....

I agree with you and JaneK. It isn't denial, we all just deal with our reality in the best possible way in each new moment.

So glad you and George can comfort each other. Sending love and prayers out your way!

Praying for the whole family, especially Andrew and you! xo

Without doubt there is NO right or wrong way to weave your way thru the hardest times of life.

Looking at the image I whispers to me you leave it because both your heart n soul and the photographer in you chose to 'freeze', undisturbed that vision of hope, of happier days, of something he loves. That vision speaks of so-many-things on so-many-levels..

Isn't that, after all what photographs do ~ freeze/capture/hold forever happiness and hope and pivotal moments within time?

Isn't that, after all, what real love does?

Sometimes photographers (or their hearts) simply do it in real time..
The way you have with those stakes.

As long as it feels right, you leave those stakes and rakes and shovels there. Maybe a week. Maybe till the end of all time.

No, right nor wrong. Only what wraps your heart tight against the storm matters.

Thinking of you always
Issy

George has such a sweet smile. Your birds Angels!

Sometimes things have just got to be pushed off to the side for more important things ! Lovely photos ! It is a bit cooler here today as well the winds from the north have blowing ever so gently the sun is out and Papa and I just came in from finally being able to be in the gardens and not swelter ! Thanks for sharing . Oh supper sounded good quick and easy I say ! Have a good day !

This is definitely a challenging time for you. I send {{{hugs}}} across the miles.

Your photography is amazing! Your meal last night sounds like something I would enjoy. Any leftovers?:-)

We all do what we can when someone at home needs our care and attention. My husband does so much around here.... I would have to move elsewhere, someplace without a yard or the need for so much physical labor on my part if anything ever happened to him. Kudos to you, Kate, for realizing and accepting things for the way they are and just simply letting go of things that really don't matter anyway, iike tomatoes in the garden. xox

YAY George! What a fabulous good boy he is.

I'm sorry to hear the changes that your husband is going through are hard on you and George, too. I'm loving my garden right now - my first ever - and it IS a lot of work. I'm not a big hot dog fan, but when I do have them I like to add sauerkraut. In fact, I think I only eat the hot dogs for the sauerkraut. *smile*

George will be such a comfort to you .. and you to him. I know my kitties kept me going. I love hot dogs. Try to have them every 4th of July. You are doing fine, Kate. Do what you can ... at your pace. And, give yourself a big hug!

Take your time, Kate. There's no rush on moving that stuff...unless it bothers you. As I told a friend who is fighting breast cancer not long ago when she was apologizing or second guessing her actions about who to tell what and when, "you get to make the rules now" Whatever you deem appropriate is the right answer.
Hugs and prayers.

oh kate....
just know that i am always thinking of you and your hubby and all that is and isn't.

like you, outside has been a thing of the past...but now, oh sweet now, it's so wonderful out again and the rain storm this afternoon was spectacular.

You are a class act, my friend. And George has learned much from you.

Hugs.. I wish I could deliver them in person.

If you ever come out west, I'll take you to the best hot dog place in the World. My treat. God Bless.

Growing up we had hot dogs and beans every Saturday night and now they are a special treat I probably only have once or twice a year...times change but I still like them:)

Love love love Call the Midwife too! I was a Visiting nurse for many years but fortunately times had changed most of that too!

I can no longer get down in the garden dirt and have been experimenting with container gardening. I will let you know how it worked out for me. So far, the dandelion and collard greens did fine. Also the herbs and strawberries. The carrots and radishes not so much.

At last I find time and good internet to connect to your blog and check in on how you are. Glad to find you writing and taking photos. Adapting is such a miracle of life - what we can't imagine sometimes arrives and then what do we do? We deal with it - dog and human. The other commenters here say what I want to say really so I will just sent my little message of connection - thinking of you from beautiful soft misty and sometimes HOT - Scotland. PS Dogs don't worry about walks - they just love being with you (and frisbee) X

George is so handsome and looks so loving. I love the bird pics. The storms are on their way to us now I think.

What a fabulous picture of George. He looks like he's smiling at the camera.

All of us have to pick and choose and I understand.

selective reality .. i can dig it xo

Your post fills me with both melancholy and hope - I pray for your situation and may the beautiful birds and George give you hope.
Blessings.

what a melancholy day it was. I kind of like the stakes and spade left where it is. Makes for a good picture and brings back some good memories.
Life is what it is, and I have miles to go before I sleep, miles to go before we sleep.
Hope you have a great week Kate, why not you deserve it.

I always find your coping methods so pragmatic, yet full of love and hope; I don't mean unrealistic hope - a more generic sort. I hope I would be like you in the face of what you've been going through for so long now. x

I haven't read the above post yet but wanted to connect with you today after I read the following in a Feb 2013 Oprah magazine (doctor's office, don't you know, from that date ;)

"Life isn't about avoiding trouble, it's about being present, even through the hard stuff, so you don't miss the very thing you're trying not to lose."
Catherine Newman