It’s a chilly Thursday evening and I finally broke down and turned the thermostat up. I have it set pretty low and am staying warm with a sweater and a toasty throw while I sit in my favorite spot here in the living room. George is nearby waiting for me to toss his toy like I’ve been doing over and over for the past half hour.

We have a system now with George, as I’ve gone back to work and he’s been alone for much of the day. My son gets home from work early in the morning and takes him for his first walk of the day around 8 then has him with him until he goes to bed. On Tuesdays and Thursdays, the dog walker comes and she takes him out and then when I get home, I take him out. He’s not quite used to the dog walker yet and when she came on Thursday, he half-heartedly went with her, chased after a couple of frisbees and then looked longingly at the house until she let him back in. She saw him run immediately up the steps to my son’s room. 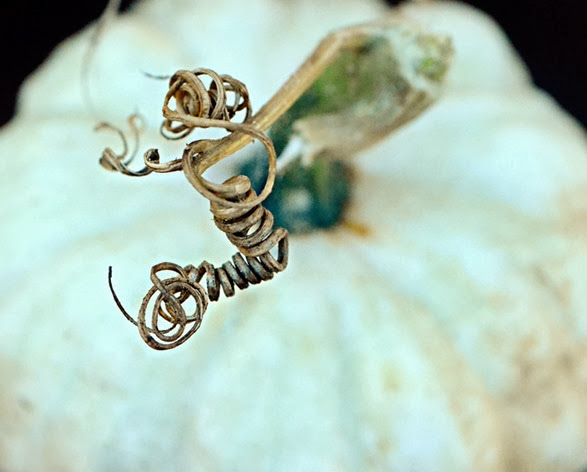 It’s just going to take some getting used-to is all. And he is a little shy to begin with.

I have to mention the squiggles in the photo above. It’s a tiny gourd that I bought last weekend. It was the only one in the entire pile with a stem like this. 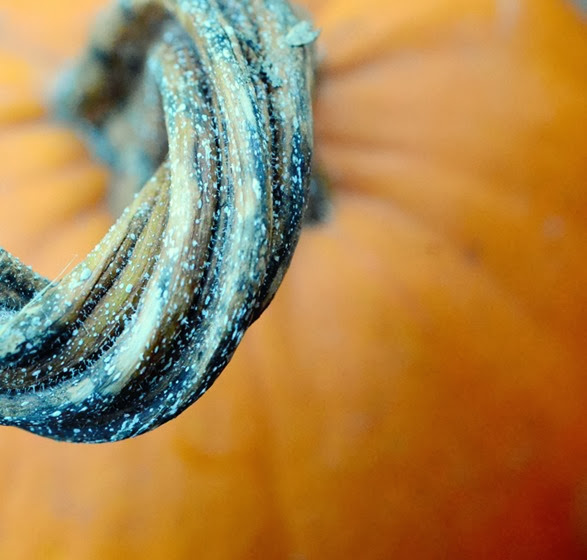 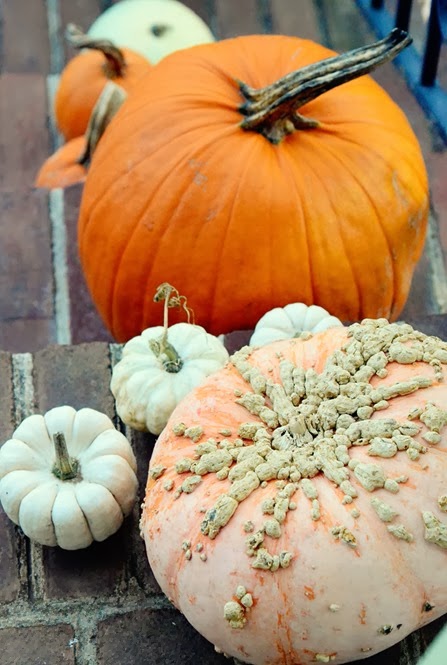 I think this one in the front is interesting. 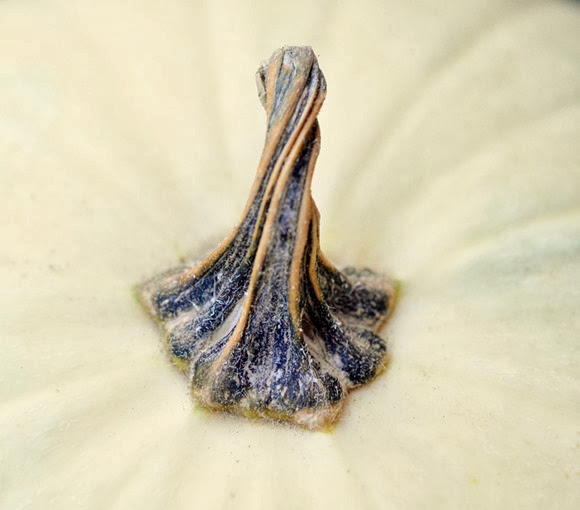 I used to love carving pumpkins and I’ve made some nice ones over the years. One of my favorites was simple, using a drill to make tiny holes, then pushing white lights through each. I found it in my Martha Stewart magazine way back when. 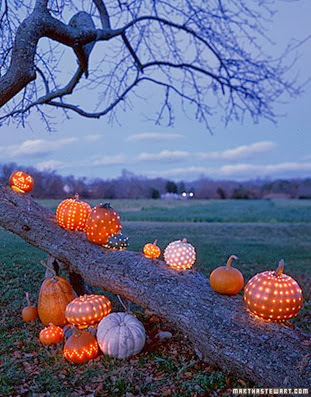 My favorite was this, however: 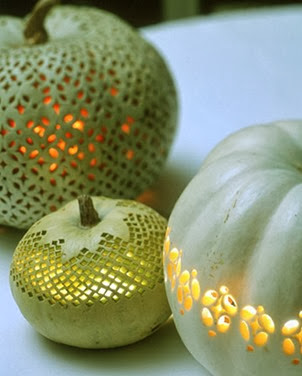 It’s very time consuming, but makes such an impact. So unique.

I read this on Pinterest, and am going to see if it works this year to keep my carved pumpkins lasting longer:

After you scoop out and carve your pumpkin, dip it in a large container of bleach and water (use a 1 tsp:1 gal mix). The bleach will kill bacteria and help your pumpkin stay fresh longer. Once completely dry, (drain upside down), add 2 tablespoon of vinegar and 1 teaspoon of lemon juice to a quart of water. Brush this solution onto your pumpkin to keep it looking fresh for weeks. 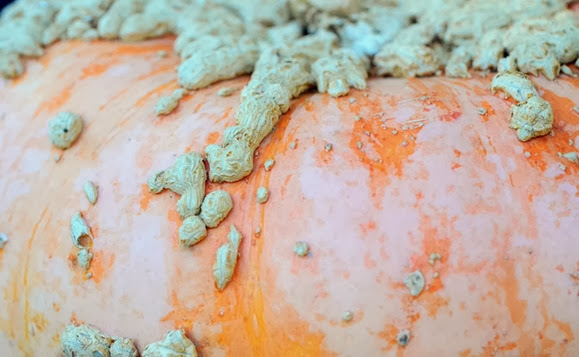 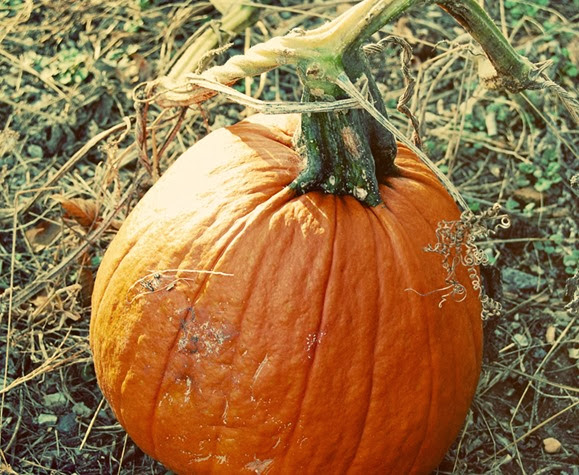 From my 2009 files. This was a volunteer pumpkin that came up among the bushes in the front of the house. 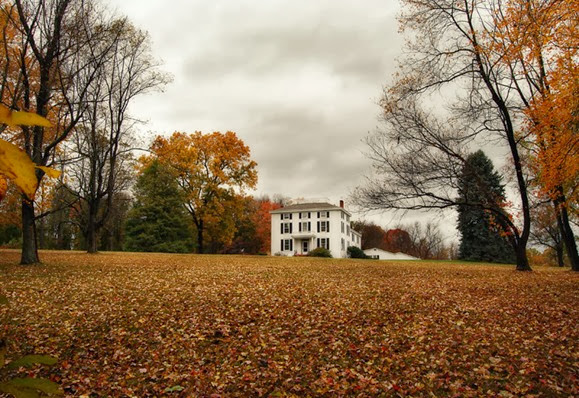 And on that note, I’ll bid you adieu. 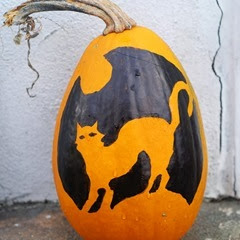 I don't even have my pumpkins & gourds yet!!

I love these "peanut" pumpkins. I had them all over the wedding. My Amish neighbors have a huge pumpkin patch and they grew them for me. They're so neat. I also love the pastel green and the white pumpkins.

I've never carved one. I like to leave them as is. I always thought it would be fun for Halloween, though!

*the wedding = for my wedding

Nice to hear from you and see your funny little gourd and those lovely pumpkins. God bless and sleep tight.

Lovely shots, you're almost getting me in the mood. I need to go to Trader Joe's this weekend!

Don't have any pumpkins yet! I don't carve either...like the natural look. That one with all the little bumps...well, I've never seen one like that before. Everyone at the Manor House has to get into their new normal in their own timing. Tomorrow is Friday...start of the weekend. Hope you have some plans to make the time pass a little faster and that will bring you some joy! xo

you usual unique "take" this time on the pumpkin! Thanks for the George progress report.

Love your close ups of the stalks. They're so beautiful.

makes me feel warm and fuzzy to see all this pumpkin love ... and that you got your macro out ... sweet George really is a shy boy i remember all too well his reaction to Lauren's big hello.... xo

Love seeing your photos and hearing that you are all healing. You've stayed in my thoughts and prayers. I'm glad that George is slowly adjusting ... he has such a tender soul.

My dog Country was Australian shepherd and border collie mix. She had to make friends with strangers. If people ignored her, then she would initiate the friendship.

George will make friends in his own time.

Love the pumpkins. Such great shots. Have a happy weekend.

The curves, textures, colors of the pumpkins delight the eye
Love the photos of the tendrils and stems

The trouble is that my hens wait eagerly for my pumpkin the morning after Hallowe'en. By lunchtime it has been picked clean.

Hi Kate, nice photos. I love pumpkins also. I am always looking for the nice stems. Love your photos and love the Martha Stewart photo. There is a house on a nearby road and every year in their backyard they have a huge arrangement of jack'o'lanterns, some real and some faux set up in a semi-circle and they are lit up every night and as I drive by I take a quick look. It is an awesome sight.

Hi Kate, nice photos. I love pumpkins also. I am always looking for the nice stems. Love your photos and love the Martha Stewart photo. There is a house on a nearby road and every year in their backyard they have a huge arrangement of jack'o'lanterns, some real and some faux set up in a semi-circle and they are lit up every night and as I drive by I take a quick look. It is an awesome sight.

Martha certainly does have some elaborate designs, there's no doubt about that!

Is George proving "you can't teach an old dog new tricks" is a true saying?:-) Change is difficult for all of us, and our pets are no exception. Hopefully he will come around with a little more time.

Lovely shots as usual. We are going to a pumpkin patch this weekend. Should be fun!

Glad to hear you're getting back into a routine, of some new sort.

The pumpkin is all about the stem, I think. If it doesn't have a curly thing or a leave hanging off, I don't look twice at it! And that bleach/vinegar trick does work...we do it all the time at the flower shop for fall events that we make early and store.

I drilled the holes in my pumpkin this year, but didn't push lights through them. I did put lights inside, and it seems to work just as well. Nevertheless, my version looks less than stunning, and now that my pumpkin is starting to look withered, it looks even less attractive. I LOVE those lacy pumpkins. Wow. I'm not sure I could pull it off though.

I'm glad to hear you're all settling into a routine. I'm sure George will eventually come to love his dog walker once they get to know each other.

We've had our furnace on for at least a month now. I hate a cold nose...unless it's on my dog.

You gotta love a squiggly stem, they are the best, and that one was clearly meant for you! I know sweet George will warm up to his new friend soon, it just takes time with certain breeds. Also, your home is always beautiful, but most especially in autumn!

I only buy pumpkins by their stes and squiggles too:) Fantastic autumn photos!

Beautiful pics. Those nubby ones are strange. This year, I scratched my grandkids names on my pumpkins while still small, and they scabbed over. I told them, "now who in the world has their own name on pumpkins?" They thought I was something.

I love pumpkins --baked my first pumpkin pie of the season tonight--I like them mildly spiced--so good! I hope to plant some next year because my son did NOT plant the organic seeds I bought him for the garden! I want to try for the white ghost pumpkins and the wonderfully shaped Cinderella pumpkins that Whole Foods have every year--quite expensive but should be easy to grow I think.
Love your autumn photos!
V

Unfortunately I lack the patience (and skill) required to do any fancy carvings, however I do love those Martha Stewart lighted ones. Just beautiful.

One year when I grew gourds they climbed to the top of the pear tree. Those little squiggles have lots of holding power.

Have a blessed day.

Love love love the pictures of your pumpkins.. What a great idea.. I grew my own pumpkins this year for Ben my grandson who is 7 now.. We carved 5 of them and I have 3 left over ...Think I will try your idea.. You are a clever rabbit~!
IT's cold in Iowa...and windy.. Fall/Winter is here..last week we received 2 inches of snow.. it was quiet beautiful... Today is sunny and the Junco bird has made his appearance.. They are the first sign of winter besides snow..:)
Have a tiggeriffic Saturday..ta ta for now from Iowa:)

Lovely pumpkins. Will try the bleaching tip this year. But this morning had just better finish battening down the hatches ahead of the storm that's likely to hit later today/overnight! Really hope George settles to going out with the walker soon. So glad you seem to be coping well. Hugs from across the miles. Jackie. -x-

i have never heard of the bleach and vinegar mixture but it sounds great. keep us posted if you do it and if it works.

did you carve those lace pumpkins?

and oh george....i wish i could be his dog walker.

Your home is what October should look like. Amidst the grey skies and bare trees, somehow there is a warmth there. You have a gift.

Pretty pumpkins, Kate. I bought a few little white gourds for a hand carved bowl Steve gave me. That's all of my fall decor this year. Cold here in Indiana this weekend, brrr.

I quite like those lacy pumpkins but I'm more smitten with your own images.. the curly bits are so cute.

Loving all your pumpkin photos, but I really love that shot of the manor house. Wonnderful.
Lovely to hear from you. Thinking of you Kate.

Oh I love those "warty" pumpkins...I can never find them around here consistently from year to year. And I was just thinking this morning, as I do every year about this time, "I am going to save some seeds from my favorite pumpkins to plant in the spring." We'll see. Thanks for posting those lovely ideas...the celestial pumpkins...Oh My!! xo

Oh I forgot to add that whenever I see a squigly pumpkin stem I always think of you! I really enjoyed all your pictures and your words too... xo

I love pumpkins...all kinds. I also get quite a few good ideas from Martha Stewart Living magazine. I have had a subscription since 1996, and I keep them all. Ha!

I love the details that nature provides for us.....FREE....so fun to capture them too....smiles

I love those tiny lacy patterns but can't for the life of me imagine how I would do that without ripping the part that's supposed to stay intact, which would ruin the whole effect. Love the other close-ups... so cool.