Today would have been my mother’s 92nd birthday. She passed away in 2006 at the age of 84 and I’ve been thinking of her off and on all week. Back in 2006, when she began to go downhill, I booked a flight to California in order to help my sister, Ginny, who was caring for her. My two other sisters also planned to come so that Ginny would have at least one of us there with her for about a month. I ended up staying an extra week, and there were two days that we all overlapped and so there we were, my aging parents and all four of their girls in my sister’s little house in sunny California. I had helped arrange for Hospice to come in as soon as I got there and our mother continued to decline but she surprised me one day when I asked her what was her favorite time in her life? She had raised seven children, had a wonderful marriage, and through the ups and downs, had experienced much happiness in her years. So when she told me that her favorite time was right now, it baffled all of us. I told her I thought it was the morphine that was talking. (We were giving her a very low dose just to control the pain). No, she said, her favorite time was at this moment now. “All my girls are here with me and they are caring for me and I know that they love me”.

Her death brought all of my sisters closer – and we had been close already. We began group e-mailing each other, mainly with the minutia of our lives but often because we just needed to talk. I would often add pictures at the end of my e-mails and it was this reason that I began to blog. I wanted the pictures and the words to look better than they did on a plain e-mail. The blog was open to my sisters only, and eventually I just went public (although I never say anything too private like I would to them of course). 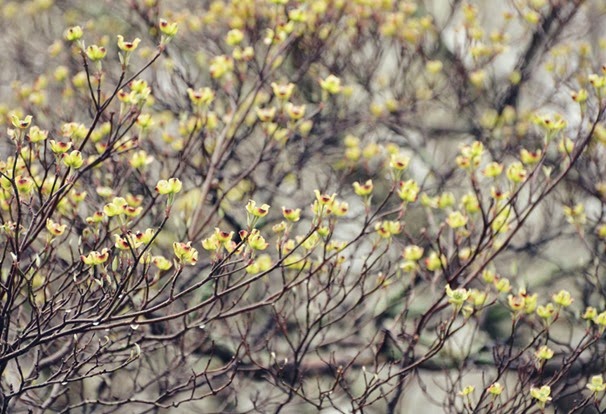 It’s been freezing cold all week. Sometimes it gets up to about 55 in the afternoons and Tuesday was a total bust with downpours all day long. The buds are finally coming out on the dogwood trees, but only just barely. The azalea bush in the front of the house is still not blooming although it has a profusion of buds ready to burst forth. 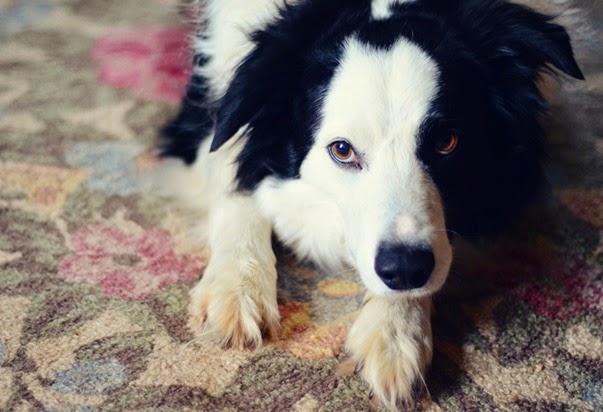 Someone woke me up really early this morning. 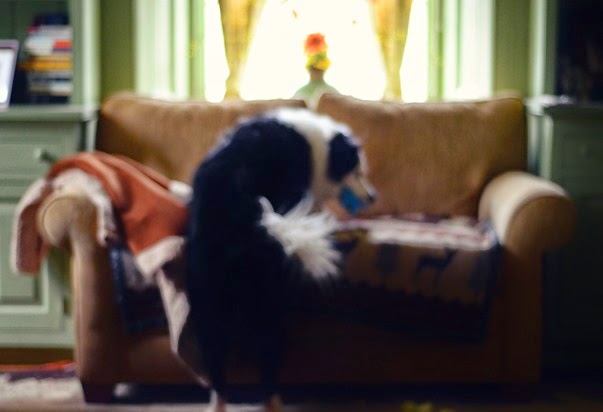 I tried to fall back to sleep after letting him out but it was not happening. So I came downstairs and we played fetch until he tired out.

It’s gray and cold this morning. 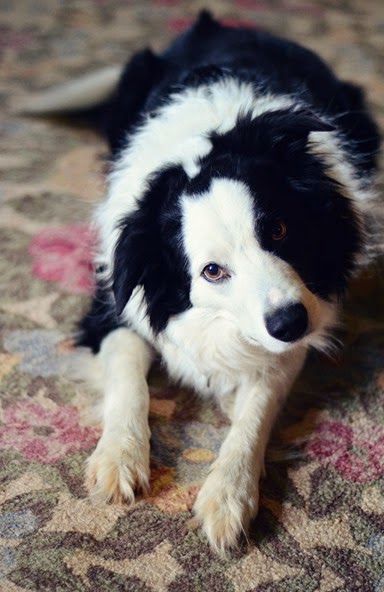 And I think somebody needs a walk soon.

And someone else needs more coffee ~

Hope your weekend is peaceful. Thanks so much for coming by.

Hope your Easter is full of Blessings Kate.
Lynda in Michigan

I've been thinking about momma a lot too lately. Seems this time of year makes me think about her more. Even at my age, she would have called me and said the Easter Bunny had me a present.

I know you didn't get mad at George cause he's too dang cute to get mad at.

The story about your mother is absolutely lovely Kate and says so much about your family, who I am sure gave you a lot of support when you really needed it. Have a lovely easter.

That is so special Kate! What a wonderful memory!
of course I'm teary eyed now....

I never get tired of seeing photos of George.

It is interesting why we all started to blog. Writing the words that needed to be said.

What a bittersweet memory of your mother. I'm sorry you lost her but how nice for her to have had such a moment of contentment at that time. It's a gift to pass happy.


Your photos evoke peace! and I love the story of your mom and sisters, thanks for sharing. My favorite blog posts are those that reveal a history or memory or piece of the person who come to visit so often in blogland. - lovely. Happy Easter to you and George - xo

Lovely post and photos ! Thanks for sharing . Have a Happy Easter weekend !

Thanks for the glimpse of personal history, Kate. I'm so glad you have your sisters!

Sweet sweet George. Some mornings we all like to rise and shine early, at least so it goes in this house with our pups. I LOVE when they sleep in a bit and let us do the same... but that doesn't happen often and we all get up early and stumble around in the dark... LOL I refuse to play ball with them at that hour though. Don't want to start a habit, that's for sure.

It was such a blessing you were able to be with your mom and family.

What a special time, Kate.
I wish you a wonderful weekend, and a blessed Easter.

I love that story about your mother. what a wise woman and I hope that if I am ever asked that question I will answer the same. What other time is there but now?

The picture of George on the pink tinged rug brought tears to my eyes. His love for you is so clear. I am missing my Bonnie so much and every dog that passes gets a stroke from me if I get the chance. Yesterday it was a young collie....what soft fur and perfect bodies they have.

We are in Menorca and I am sun burnt after several days walking and swimming. What a shock to realise you are still in such early spring weather. I will send you some sunshine! Here it comes!

I went to see a film last week and suddenly there was music I recognised from your blog. Remember the film of the birds on the trees? It reminded me of you. The film was Her, of course.

So glad you and your sisters are close and help each other. I also have three sistxers and since my brother died two years ago we have strengthened our bond. We are lucky aren't we to have loving family.

Have a peaceful and happy Easter.

That we would all have such a blessed passing surrounded by loved ones.

Touching words Kate, and hello gorgeous...that's to George by the way!
Jackie

I send along the best of wishes for a blessed Easter week-end to you and yours, Kate! Hugs!

i love the story about your mom and your sisters….memories are such a good thing and you drew me into yours.

it's still chilly here, too... even with spring trying desperately to make an appearance. the birds are being so patient. i don't know how they do it.

Kate, what a beautiful memory! Your family sounds absolutely terrific. Love your pics of sir George; his face, oh I just want to kiss him! Have a wonderful, blessed Easter and don't worry, the flowers will come! Our magnolia tree has already burst with flowers and they're never around for long before falling off and going brown so I'm trying to remember to take a whiff of their beautiful scent every time I step outside.

2008 was the year Mama had to go into a "nursing home." I still feel such disappointment about not being able to look after her here! She would have been 100 this coming November, but she died 3/30/2011. I was able to be with her when she died---that meant a lot to me. I still miss talking to her everyday and hearing her say, "How's my doll today?" Oh, so many memories! It would have been nice to have sisters; I've always thought it would! It's good you have them. :)

Thank you for sharing your beautiful story. Hope your weekend is peaceful as well!

Been freezing here too. I hope you have a beautiful Easter. xo

I love this story. Thank you for sharing. The end of life can be a beautiful thing, and it sounds like your mom's was. My sisters and I would do anything for each other but we are not close. I dream of that and think it is cool when I hear of others who are.
I'm glad you started your blog, Kate. It is beautiful and fun all in one.

Your mother was a wise woman, and how wonderful that you have such a close bond with your sisters! Wishing you a wonderful weekend!

This is a lovely story about your siblings and your Mama. Thanks for sharing this. God Bless~

Kate, thanks for sharing. I hope you had a wonderful spring break. George is sure a handsome guy. My daughter and her husband came for lunch today. They brought their 90 pound goldendoodle. He just turned one and he is such a goofball.

odd .. i was thinking of my mom this weekend too .. she passed in march of 2001 ... and i knew you started the blog to share with your sisters i didnt know it was initially private ... xo

such a good memory to have of your mother and your sisters. We have had some much needed rain in our state but only spits of rain for us. Have a good week and hopefully some sun.

Your memories are sweet ones. I have the luxury of still having my Mom at 93. But I don't have a wonderful companion like your George. And I don't think it will happen. My five rescued cats would be jealous. Spring is just around the corner - honest. Take care.

Hi Kate,I love that story about your mom and your sisters. That she was so glad to have all her girls together. That was so sweet. I hope you had a nice Easter.

Sisters are the best, aren't they? I have only one, but we have always been best friends.

I love that your mom told you what she did, what a sweet memory to hold onto.