For the record, I did not ask the dog to pose for these shots. I happened to be walking by and saw George sitting among the buttercups in the shade of a tree so I told him to stay and went inside for the camera.

He really does seem like he’s posing though, doesn’t he? 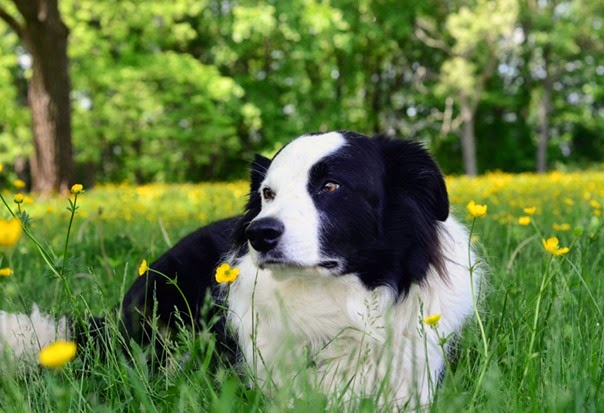 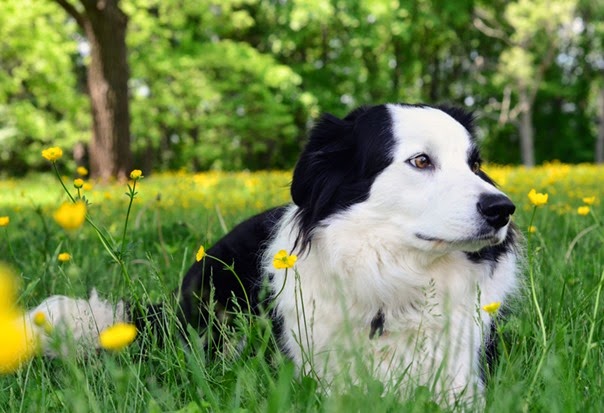 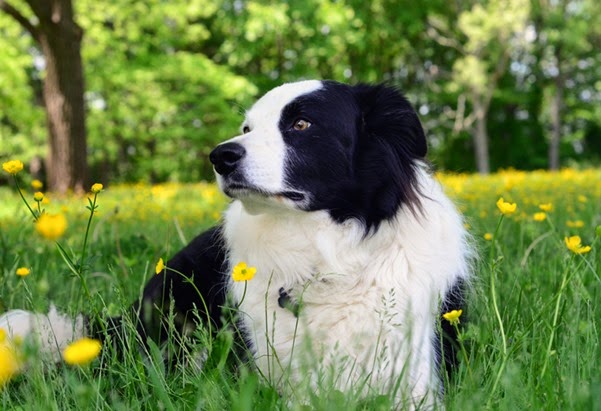 We had some nice weather this week and then some rain. And by the time I’m writing this post, the grass has been cut and the buttercups are gone. It is beautiful outside and today was perfect, although I spent much of it doing indoor chores that needed to be done.

Early last night, I sat on one of the Adirondack chairs on the front lawn in the waning light. George was with me and lying on the grass about 10 feet away from me when from the darkness of the woods, a deer slowly emerged. It continued to get closer and closer to where I was sitting as the night started to come full on. Fireflies had begun to appear and I whispered to George to ‘stay’ and told him he was a good boy. It was so peaceful.

And then George decided to get up and sit right next to me. The deer startled, giving a huge snort, and took off back into the woods with its tail raised high. What a nice memory.

Thanks for stopping by, my friends ~

All so lovely there, CG, and dang .... George sure is one fine obedient well-adjusted canine ... a true companion ;>]]

All best to you from my side of the world!

George has to be the most beautiful dog in the whole wide world. I just adore him. And I know you do also. Have a wonderful long weekend. Kay from beautiful Oregon coast .....lovely weather here.

Sometimes just for a moment, the world does seem to stand still. Some day i'll have to tell you my deer story...well actually there are two...but you won't believe them... I barely do and they happened to me........ Hugs! deb

How very peaceful! George does indeed appear to be posing! I don't mind the buttercups in the yard, but they are gone with the mowing. Sending hugs to you, Kate.

It's the handsome Sir George! Love him so much. Looks very regal sitting among the buttercups, yes he does. :) Wish I'd been there to see the deer....

I am so happy that you have that lovely place, and George to share it with.

Fireflies! You & George are a magical duo. I feel the magic. Thanks

George is such a good dog!

Nothing enhances a dog more than buttercups does it?

Goodness, so beautiful, the words the peacefulness and sweet George!

what a lovely experience and what a good boy George is .. so glad the rain is over for a few days

What a lovely picture you made even without your camera! That is a special time. Thank you for sharing :-)

What a wonderful evening! It reminds me of my favorite quote:

"I only went out for a walk and finally concluded to stay out till sundown, for going out I found, was really going in."
-1913 John Muir

You paint such a beautiful picture with your words! Can you come help me train my son's golden lab to be as good as George? Such a gorgeous creature in a totally gorgeous setting. Thanks! ~chris

Sounds like a beautiful evening and that George is such a wonderful companion. He is sure a handsome boy!! I love fireflies, we don't have them out west and it's one thing I love on the east in the summer time!! Hugs!

What a handsome boy George is! The lightning bugs have begun to appear here too, and the field next to us looks like a twinkly wonderland every night...my favorite! Enjoy the rest of your weekend!!

These photographs of George are so wonderful, Kate! I especially love the second one. He looks so peaceful and content.

Oh, I can't get "Dog and Butterfly" by Heart out of my head now. And...I know you did that on purpose!
Blessings!
Hugs,
"Sybil"

hi george….you look adorable as ever!! do you know how much your mama loves you :)
xo

That sounds lovely. And George is a GOOD boy who certainly knows how to work the camera. ;)

What a wonderful dog. And a nice memory for you. Sounds divine.

Idyllic. George is a ham with most impressive restraint. My dog can.not. resist chasing deer, or anything else that she determines doesn't belong in her yard, for that matter. I can't really complain. She protected my garden exceedingly well last year.

He could be a movie star. A very beautiful boy.

Perfect moments like that are why I love the country so much . Lovely photos ! Have a good week !

Love the photos of George.
My girls, Jodie to be exact, won't wait til I get the camera.

I can just imagine the deer. We get them here, at the beach, but I've never been able to get them on camera either.

So perfect and wonderful memory! Miss you my friend. Our house is not quite so peaceful these days. So looking forward to calm doggies at some point in my future.

Sweet Sweet George! He is so photogenic!
and I'm so glad you are making happy memories :)
The images are DIVINE!

George is a natural... He would get my vote on America's Next Top Model LOL!

What a magical moment to share with a deer. I believe I have read somewhere that deer symbolize the ability to move through life and obstacles with grace....this certainly seems true of you:)

Hi Kate, your evening sounded lovely. I wish we had fireflies here in Mass. If we do, I have never seen them. I have only seen fireflies once when I visited a friend in Pennsylvania. Those photos of George in the buttercups are so lovely.

Your description of the deer encounter sounded almost identical to one I had just yesterday. Their snorts always startle me...it is a sound I never imagine coming from them for some reason. Hope you are well...missed ya!

George, buttercups, an Adirondack chair and, for a moment, a deer.

It's those moments...beautiful. Hope you are well my friend. xo

It sounds like one of those perfect moments... I'm still waiting for the fireflies to show up here, I'm sure it will be soon. xoxo

George is a natural model. The grass and flowers are beautiful. We are finally getting rain, so the grass should start greening up here too.