These are the days

It’s a rainy evening and I just finished my dinner of leftovers while catching up on the latest episode of Longmire, my favorite tv show at the moment. For dinner, I had {this} and, oh my, was it ever good.

George has come out from his hiding place to play a little fetch with me. He’s been comfortably ensconced behind a table in the living room because he could hear the distant booming of thunder and he could see the occasional flash of lightning. But he can see I’m on my computer right now, so he’s silently waiting for me to get done.

I had a fun weekend although I had to leave my little buddy at home with my son. I don’t like doing this and I try to only go places that I can bring him. But sometimes it’s kind of impossible. 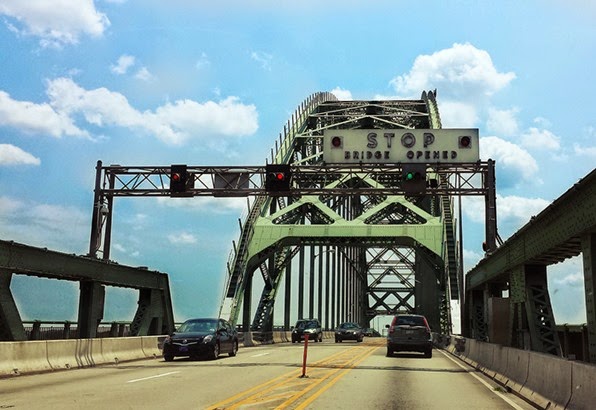 I went to Philadelphia to visit with friends after picking up my friend, Karen, in NJ. Here we are going over the Tacony-Palmyra Bridge. 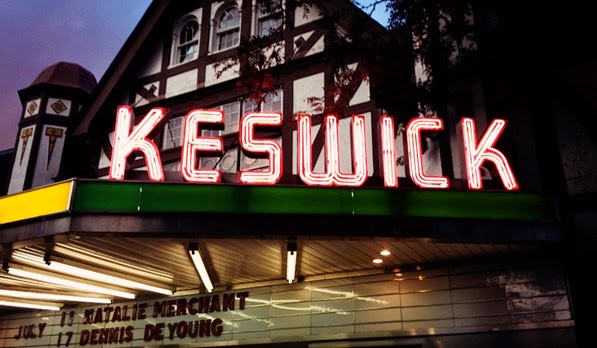 We went to the Keswick Theater to see Natalie Merchant. 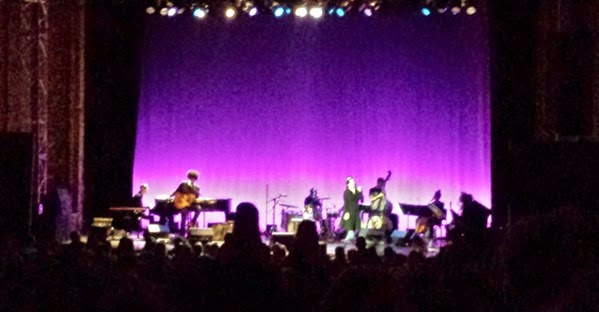 And she was fabulous.

Karen and I went down to the stage toward the end of the concert. When Natalie Merchant and her band came out for the encore, people began giving her gifts and she was so thankful and surprised, it seemed, that she ran backstage and came out with 3 trays of chocolates. I was right at the far edge of the stage and she ran to me first, opened the chocolates and told me to take one. Wow! 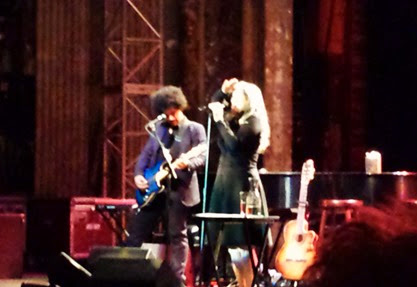 The security guards wouldn’t allow anyone to take photos so I stood behind a column and got this one above. It’s kind of crappy but there you go.

I had so much fun! I loved 10,000 Maniacs when she was the lead singer for them and then she left to pursue a solo career in 1993.

And this is from her first solo album, Tigerlily, in 1995. Loved that one. 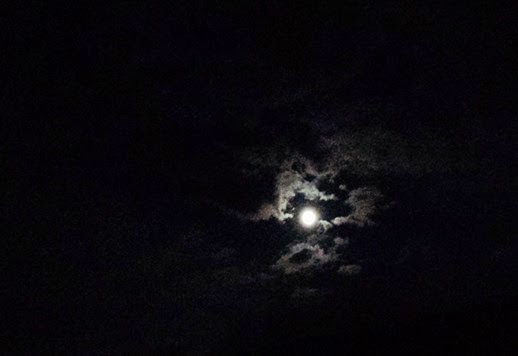 The moon was full, the night was fun, and it was good to be out and about with long-time friends. And I still cannot believe that I didn’t get to bed until after two in the morning . . . 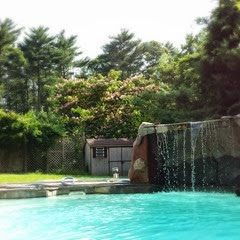 The next day, Karen and I went swimming at her sister-in-law’s house. No one was home, but they knew we were coming. It was so very very nice floating in the cold water on a hot summer’s day.

Sometimes, everything is okay... Enjoy those moments :-)
Love Natalie Merchant. I started humming right when I saw your post title! I love her song on depression (like the weather) in a weird way. She puts words to something that is hard to describe.
Glad you had some "all is well with the world" moments... They keep us going!

Love Natalie Merchant too though I haven't listened to her in years. What fun that must have been...

I absolutely love Natalie Merchant and I listened to 10,000 Maniacs back in the day also!! I was wondering what happened with her. She must have a new CD if she is performing.

My daughter's boyfriend's sister (I know, complicated) had a video and still photos taken on her wedding day, from getting in her bridal gown to the end of the reception. It was all set to These Are Days by Natalie. It gave me happy chills to watch. Just perfect!

Glad you had a great time in Philly! :)

look at you out till all hours of the night…I LOVE IT!!

i love that george is patient….what a dog !!!

Such a good puppy you have and I'll be he missed you while you were away and greeted you with much joy when you got home. I too loved listening to Natalie... I need to see if she is in my iTunes collection...

It's good when things go smooth. Glad you had a good time at the concert and with you friends :)

Oh Honey! Saw that Tacony-Palmyra and I was 6 years old in the back of the car, going over THAT bridge, THIS time of year, going down the shore! And the Keswick! I had more fun reading this post. . . gotta get out into the moonlight. Yes, we hate to leave our little buddies. Nice your son is about.

So glad there are days like this for people who deserve them:)

And everything will be OK eventually - trust me.

I am glad you had a good time ! Wonderful photos ! Yes our Miggs gets the same way when there is what we call thunder the booms around ! Thanks for sharing , Have a good week !

i love Longmire and somehow missed that the new season had begun so i am catching up online and only the very first one isn't online .. bummer but clearly Walt's life is getting more complicated

That shot of the moon is priceless!

I saw something at Sam's Club...of course can't remember the name of it now. Some kind of jacket/coat that is "suppose" to calm animals who are scared of storms.

Was wondering if it actually worked.

What an exciting time at the concert, Kate, and it sure looks like you had a wonderful weekend.

Happy day to you!

Sounds like a perfect weekend, and I haven't been to a concert in years! I love that you got to have a chocolate too! :)

Hi Kate, good to read about your nice weekend. I loved Natalie Merchant back in my day! I will look up her new stuff. I hadn't thought of concerts in a hundred years, maybe I will now, thanks.
I'm struggling on settling back into routine after my 3 months in Australia visiting our daughter. Some part of me expected Steve to be here waiting, I suppose. Does that happen to you when you return home? Kids have been great to keep me busy and caring for Mom at her home weekends and midweek have filled many days for me.
I hope to get around this big empty spot inside at some point. Take care and enjoy. Hedy

Wonderful post...love that you saw Natalie Merchant!
Just last week, I targeted that Coconut-Shrimp Curry recipe from PW. I cannot wait to make it, too!

What a wonderful dog you have.

Sounds lovely. Especially swimming in a cool pool on a hot summer day.

Hi Kate, sounds like a wonderful weekend. So glad you enjoyed the show.

Give George a hug for me!

Things sound really good in your life. And that is very much OK! Xo

Everything is ok, Kate. It is.