Hello, my friends. When last I wrote, I told you that I fell in love with not one, but two photos over the weekend. This is the second one, by Nowordz Photography. And it has a lovely sentiment that surrounds it.

I found the beautiful photograph below and a post about the crane project for Japan on a blog that I often visit, Constantly Evolving. 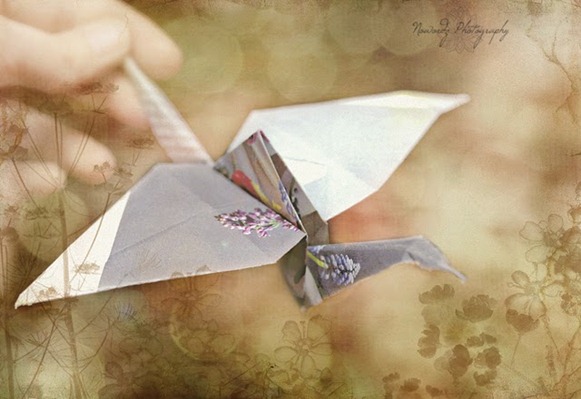 This is a beautiful and simple way to show support for Japan and its people, and from what I can see, the Flickr group has been flooded with photographic offerings ever since damiec, the group administrator, initiated this project.

She says, ”The crane is a mystical, holy creature in Japan - it represents luck, good fortune, and long-life. The act of folding cranes, specifically, 1000 cranes, is said to make the folder's wish come true.
Strings of one thousand paper cranes are often sent to places where tragedy has struck as a symbol of hope & healing. Sometimes groups will fold 1000 cranes for an ailing friend in hopes of speeding her recovery.

Whether you believe in the power of the crane, or simply in the gentle act of beauty and kindness, there is something uplifting about this tradition”.

And The Miya Company is donating $5 for every image of a paper crane it receives up to $5000 to Save the Children Japan. Visit this link to find out more:

Miya Company - Save the Children Japan 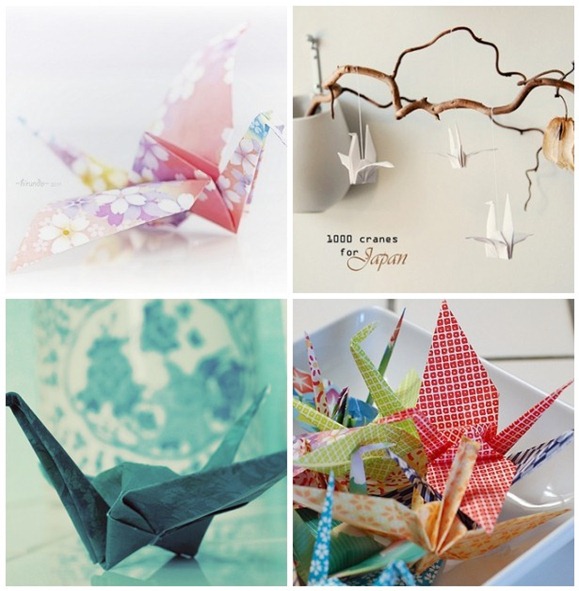 These are just a few of the beautiful images on Flickr that are pouring in from all parts of the world. Many of damiec’s Japanese contacts have told her how moved they are by the beautiful images in the pool and the knowledge that so many people in this world are holding the people of Japan in their hearts. 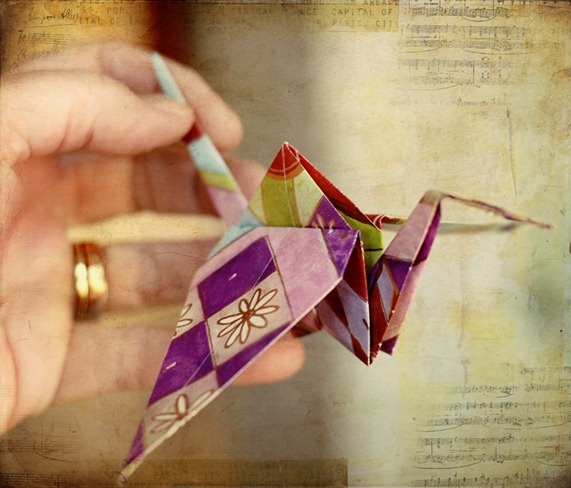 This was my offering. I didn’t have any of the beautiful origami paper on hand, so I used some wrapping paper, and followed the easy instructions below.

And this just in from Damiec’s Flickr photostream:
The organization Students Rebuilding is collecting 100,000 actual cranes. If you get a group together and fold more than 50 they will even send you pre--paid postage. The cranes are being woven into a sculpture and the Bezos Family Foundation has pledged $2/crane up to $200,000! The money will support Architecture for Humanity's rebuilding efforts in Japan.

Now that sounds pretty darn good to me.

your crane is lovely and thanks so much for helping to spread the word!

what a sweet way to show the japanese they are cared for and wished peace.

Everything about this idea is so beautiful. As is your crane Kate. Thanks so much for posting this. xo ~Lili

Thanks for including my photo!!! :) Folding cranes has become an obsession in my home. *shakes head* I just bought some beautiful oragami paper at Michaels too!

What a wonderful gesture.

I've been wanting to try this... yours is beautiful, Kate! And it's such a lovely way to help...
xoxo

So glad you're joining - I submitted my photo to Miya earlier today.

what a great post...and such a great idea....love your crane..

well that is just such a wonderful fabulous idea. and a lovely group of photos. I like your wrapping paper crane. thanks for sharing this.

thank you so so so much.

Your crane is so pretty! Such a lovely idea, thanks for posting the information.
I'm going to try my hand at folding one -

Thanks so much for spreading the word. I think this is perfect for gradeschool children to participate in. The act of making something (whatever that may be) is so healing. Not only for the people in need, but for the children that have become anxious watching the frightening footage and discussing this tragedy at school. keep up the great work!

Sorry Kate--it said "whether you believe.."but I couldn't let the opportunity go."

Your crane is beautiful, Kate - love the textures added.. and the sentiment. Wow is right.

This is great! What a fun, mindless project to do at night. We could hang them in Steve's room too.

Beautiful photos. I love your crane. This is such a cool idea.

On my to-do list today is to go buy some origami paper and a book or something, and start making cranes. The children in my church are collecting money for Japan and we want to give a crane to everyone who donates.

Your crane and photo are just beautiful!

Very cool. I bought a t-shirt and the proceeds go to a relief fund for Japan .. I have a ceramic crane hanging in one of our front windows, do you suppose I can snap it and enter it in the Flickr group or is it cheating?

This is such an amazing project! A dear friend gave me an origami crane when my mother passed away!

Love your crane photo! What a neat thing this is.

i came by to visit and then i see all this wonderfulness....

they are lovely...and a great cause...

give George a hug

Thanks so much for posting this. I passed it on to my daughter who loves making paper cranes. She has posted it on facebook and is intending to send a few.

Lovely post, I must give it a try. Your bird is beautiful. Can I ask what that beautiful texture is called? Thanks.

The texture I used for my photo (at the bottom) is Kim Klassen's 'lyrical'. It was a free download.