I  spent Sunday in another city. (For those who are regulars here, last weekend was New York). Perhaps you can guess what city this is from the architecture ~ and the fact that I didn’t have to drive really far.

It was a typical March day, insomuch as no day in March can truly be described as typical. It was chilly and warm, and sunny and overcast, and bright, and windy ~ all wrapped up in one. 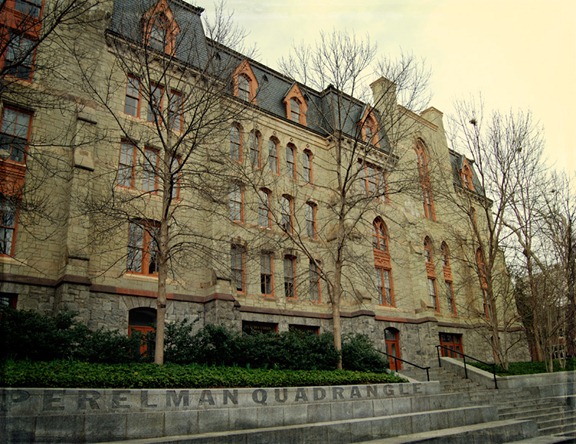 I guess this would be what is called a clue and if you googled those words, you’d know what city I’m in. But really, you can do this. Step away from the google. 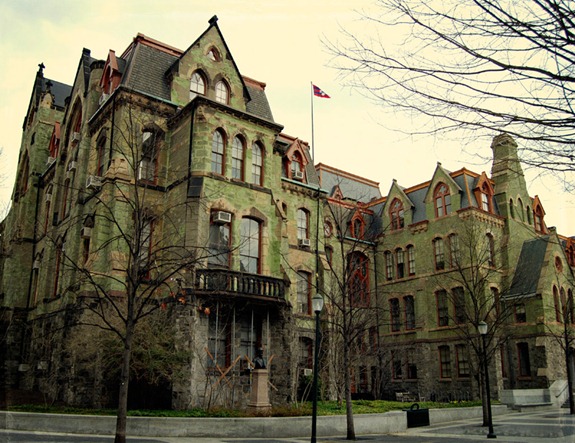 And look at these old buildings. I think this one is a university, or part of one. 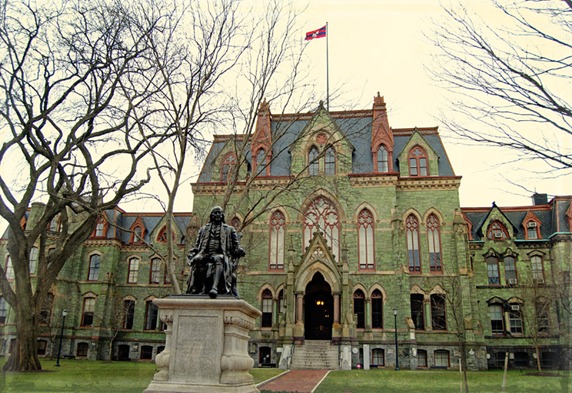 Ok. You should have it now. I mean, with the statue and all. 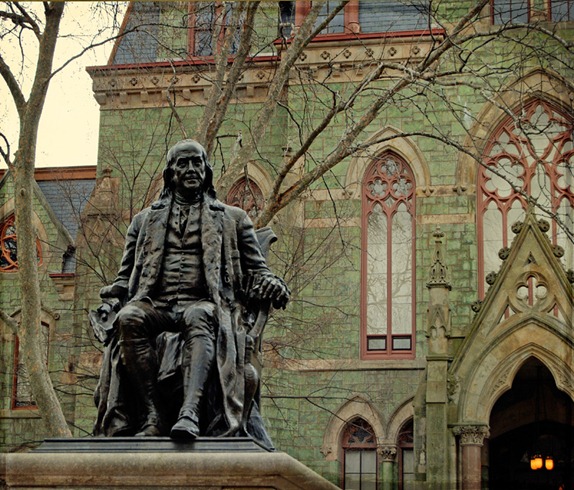 If I were a 1700’s babe, I would have totally been crushing on this guy. 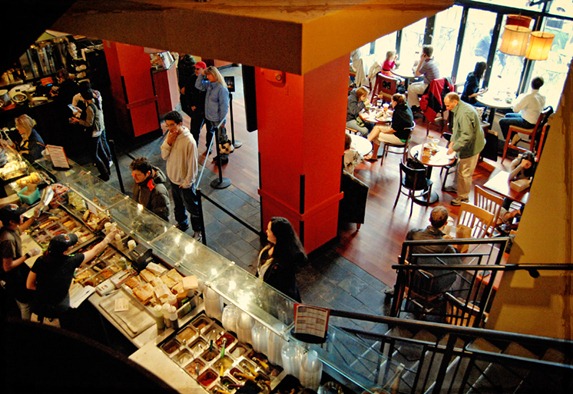 That’s my niece, Emily, at the counter down there. We went to get take-out lunch. 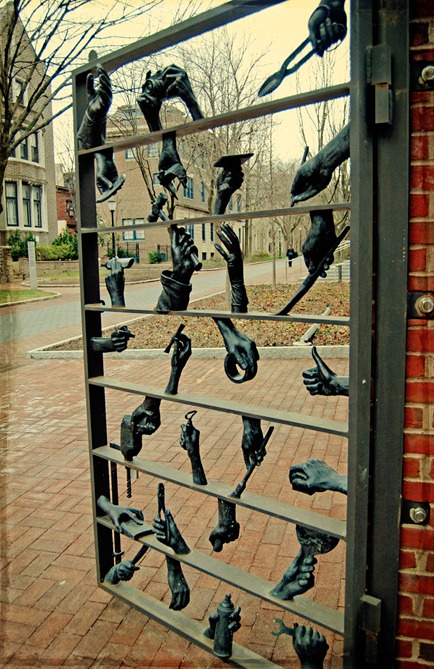 An unusual gate; this marks the entrance to the Charles Addams Fine Arts Hall at the University of Pennsylvania. 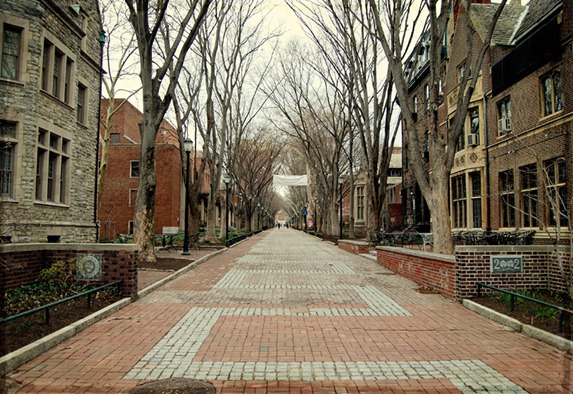 Congratulations to those who guessed it. So was it Ben Franklin that did it for you? 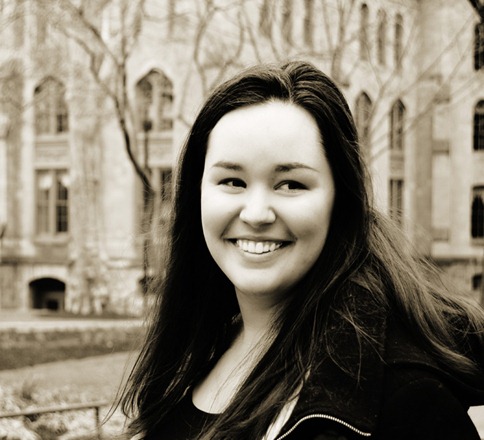 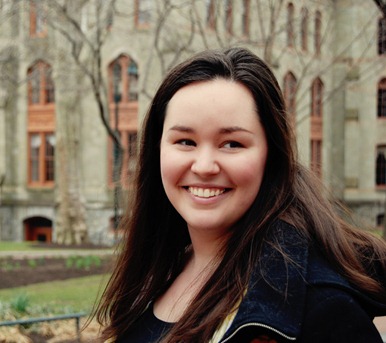 I couldn’t decide whether I liked Kevin Kubota’s chocolate syrup
(the sepia version, above) or this version. I love them both. 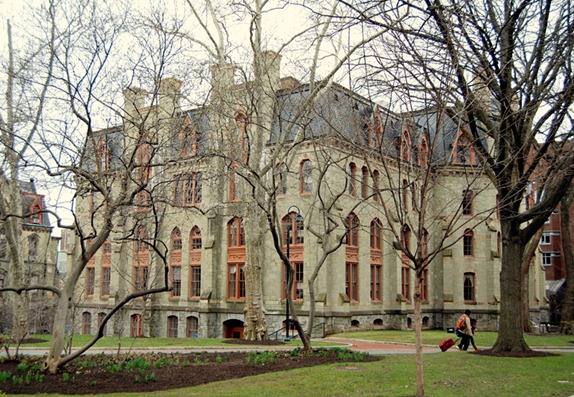 I’d like to spend some more time in this beautiful city. And you know what’s funny?

I was born here, in Philadelphia. 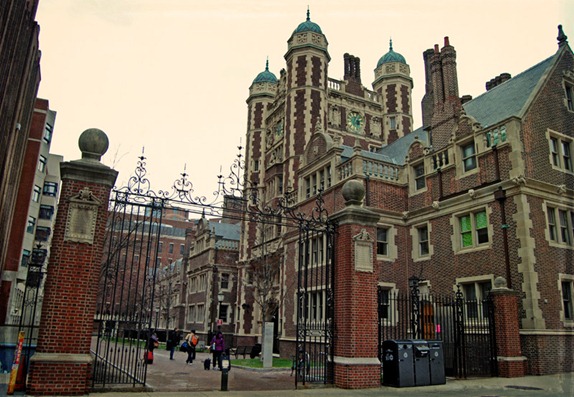 I just love the architecture. This was taken along Spruce Street, in University City where I was visiting my brother in the hospital.

Without going too much into it, he’s getting his final chemo treatment, and a stem cell transplant from his twin brother and will be in the hospital for a month. He was diagnosed with leukemia last spring.

It was a shock. Especially to him. 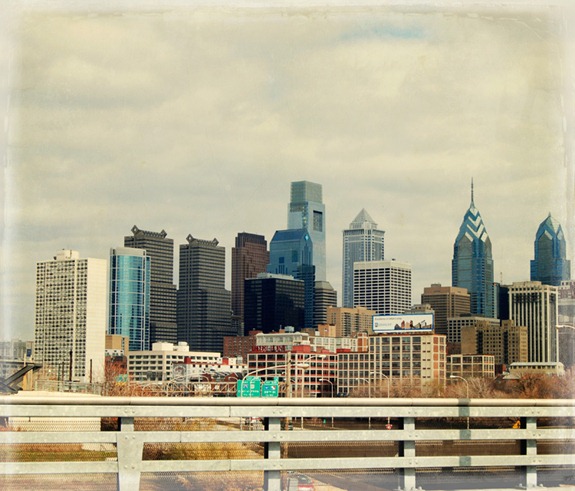 Everything will be ok, though. It will.

Even when he’s sick, my brother is just pure love. And speaking of love, I was in the City of Brotherly Love, man. 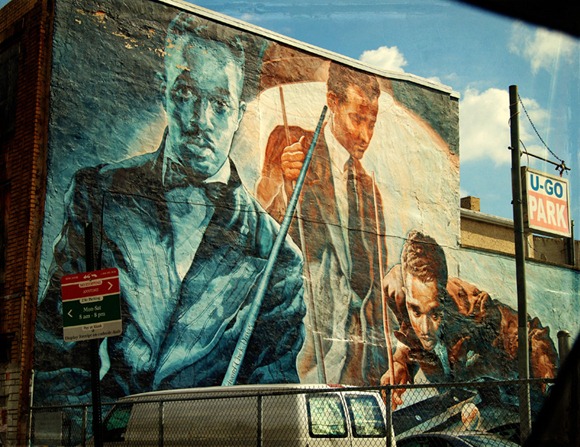 I loved this wall mural, shot from the driver’s seat of my car while stopped in traffic. I was giving my niece a ride home after the hospital visit, and she told me there’s a lot of cool art like this in the city.

So I’m going to have to go back. And maybe spend the night in her totally cool apartment where she has an upstairs and a kitchen with lots of room, an ironing board built into a wall cupboard, and stained glass windows.


: : :
I get nervous sometimes, driving in big cities, but the more I do it, the more I get used to it and I don’t get so {I don’t know} scared anymore. I guess what I’m saying is that for me, anyway, it’s good to face my fear.

Emily in chocolate syrup is positively frameable! And yes, Benjamin did it for me. We don't have buildings that old out here.

I've never been to Philadelphia.... I know what you mean about loving Ben. I am in love with Thomas Jefferson... he was so hunkalicious!

Looooove these armchair tours, thanks! I guessed correctly on the first photo, THO...I have never been to Phila. Have seen it in lots of movies. One with Denzel comes to mind. Mmmmmm, Denzel......Is there a pic of a cardinal as a prize for guessing correctly??? LOL

Prayers and good healing wishes for your brother. Your niece is a peach, go, go, go soon, stay in her darling appt.

Thanks for your wonderful blog!! George is a cutie but Blackie is my fave, give her a little head butt for me.
:)
Gayle in.....
Sunny, sunny, warm Sandy Eggo

thanks for the visit....those buildings took my breath away....and the biggest prayers to your brother !!!

God bless your brother and his family. Thanks for taking us along for the visit!

I guessed Pennsylvania but not the town. Great snapshots and I love that gate.

Thank you for sharing your trip - I 'got' it when I saw Ben. He rocks!
Wonderful architecture
Your niece is so pretty!

Thoughts and prayers for your brother

Kate..Your out and about and Im home. I love each photo you places here. Im a history buff and love old buildings . We dont have many in my part of Canada . I enjoying this blog more that you know.
Love Love them all. Your niece is stunning.
Have a wonderful time and I will never travel without a laptop again. Live and learn.
Have fun.

I've always wanted to visit Pennsylvania. Thanks for a short visit through photos. beautiful architect (I know msp.)

Kate I also want to thank you for checking on me and my blog when I did leave for awhile. Ment alot.
Lisa

Your photos make all the cities look like cities of love, brotherly and otherwise. Hope your brother pulls through. It's so nice that you got to spend time with him and his family.

Glad you enjoyed your visit. Prayers for your brother.

You're such a traveler these days! And kudos to you for stepping outside of your country comfort-zone and seeing the city sights! My husband and I recently went back to my old city stomping grounds to visit some friends and we couldn't WAIT to get back to the two lane roads and wide-open spaces!

Will be praying for your brother as well as your husband.

That gate is sick (in a great way) love it!! Wonderful photos of a FUN, FUN city! You captured it well.

Those are great buildings in Pa.. I love to see college campus buildings ~ so much architecture...
Thanks for the visit~! it was tiggeriffic...
ta ta for now from Iowa:)
prayers for you brother...

amazing pictures :) I want to go see PA this year, it was actually on my list of things that i want to see this year :) now I am going to go read the post about your visit of my city (ny) :)

Oh thanks for the tour. You certainly take us to the finest cities. I'll keep your brother in my best thoughts.

Ah, I guessed it right, thought you might have been visiting your brother again. Sorry to hear he is in hospital again, but here is hoping all will go well for him and his twin.

Love the architecture Kate. And the green on the uni building, very cool. A place I'd love to visit.

Always had a major crush on my man Ben!

Beautiful city buildings! And many women crush on Ben Franklin. I like his smarts but the rest of him doesn't do it for me...I might be one of the very few!

Great shots! I enjoy visiting Philly! Except for the Phillies of course....I am a Mets fan.

Positive thougths to your brother - both of them.

Is that building green from moss, or are they really green stones? Whatever, it's beautiful!

Wonderful photos. I have never been there but your post has brought a sence that I have thanks for sharing. Have a great day !

Sending well wishes to your brother.

Beautful buildings. What an amazing place.

what a stunning stroll .. each phot more amazing than the next.. all my best to your brother!!

your niece is beautiful .. i liked the sepia ..but both are lovely

Beautiful pics of my city! It was so cool to see them from a different viewpoint. Didn't recognize my own city until Ben popped up in the pic. Philly is so rich in material!
Well wishes for your brother.

BTW, you have (along with Pioneer Woman) have inspired me to improve my photography and I just purchased by first DSLR ... the Nikon D7000 ... Boy, am I in for a ride of learning! The lens themselves are overwhelming! Thanks for being out there and sharing!
Reena

Maps are good and you are an awesome navigator ... compasses are good too.. and I am in love with the moss on those bricks .. reminds me of Hav'ard Yaaad

We spent last Saturday on a day trip to Philadelphia (live in Lancaster County, PA). There is a lot of beautiful architecture! Hope your brother continues to do well.

Thank you for sharing your gift. Blessings to your brother....he will be in my thoughts.

Hey, my husband was visiting a friend in Philly this weekend, too!

And yeah, I totally would have hung out with Big Ben. He liked beer.

Your niece is gorgeous; can't decide which photo I like better!

Beautiful photos of the university...yeah, I could see Ben Franklin getting my petticoats ruffled...or whatever they wore back in the day.

Hope your brother comes through the chemo well. Peace and blessings to you all.

You have many things going on to do with doctors, it seems! So glad your brother could help out your brother-in the city of Brotherly Love--hope they'll both be feeling well soon.

And Emily in Chocolate Syrup--lovely! Love her toothy grin.

Sounds like an excellent trip. So sorry to hear about your brother! May he be blessed with a miraculous recovery and be back to normal in no time.

Were most of those photos from the campus? It was beautiful! Glad you shared your travel adventures with us!

I have a soft spot for Philly, since my daughter lived there for five years. She's in NY now and I miss my visits to the lovely city of brotherly love.

You could have stopped at the flower show! I love Univ. of Penn. gorgeous campus. Used to walk it a lot when my mom was in the hosp. years ago. next time you are up, we should try for coffee. :)

gorgeous shots and sites....i'm related to him you know - he had an affair with one of my great, great, greats and deeded her an inn

I miss Philadelphia, now that my son is back home again.

And you totally crack me up about Ben Franklin. :)
xoxo

Would love to visit Philly. You know the great improvements on leukemia treatments are amazing compared to what my father went through 21 years ago. I am glad to see he is almost done with his chemo. Hugs!

Great shots, looks like a wonderful place to go to school.

Great shots, looks like a wonderful place to go to school.

for all of it.
(sending healing thoughts for your brother)

I wish your brother the best.

Having never visited Philly before I really enjoyed the tour. Your niece has the most beautiful complexion and for that I would vote for the full color, but I've always had this thing for sepia. Your "If I was a 1700s gal" cracked me up! Sending out positive thoughts for your dear brother. xo ~Lili