A mild Saturday in March

I was feeling much better on Saturday morning after a strange bout of illness that began at work on Friday that I’m beginning to suspect was due to eating too many Thompson seedless red grapes at lunchtime.

Seriously, I ate almost 2 cups of grapes and I believe my symptoms were due to high blood sugar (although grapes aren’t really high on the glycemic index scale). I won’t get into the nitty gritty of it all (because who wants to talk about sickness and symptoms) but from the moment I woke on Saturday, I felt immensely better.

Or maybe it wasn’t the grapes at all. Maybe my body fought off whatever it was that was bothering it.

Saturday morning was pretty dismal as far as out of doors was concerned. I was thanking my lucky stars though, that we don’t live in the path of one of the hundreds of crazy tornadoes that have been happening throughout the country. I’m so sorry for all that those people have lost. 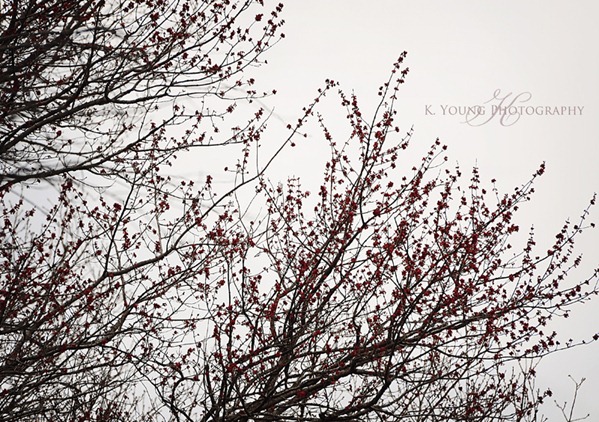 The trees are beginning to bud here. 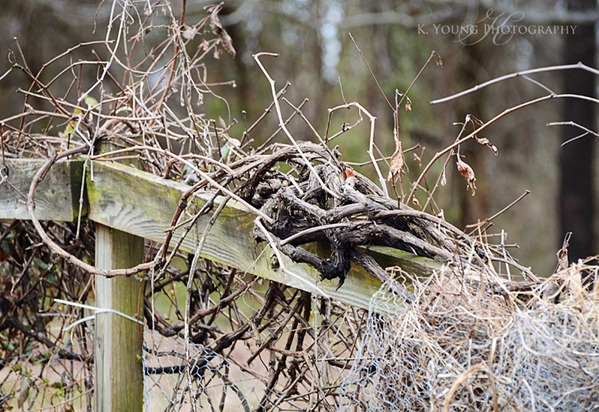 And the gnarly old grapevine will soon be coming to life again. 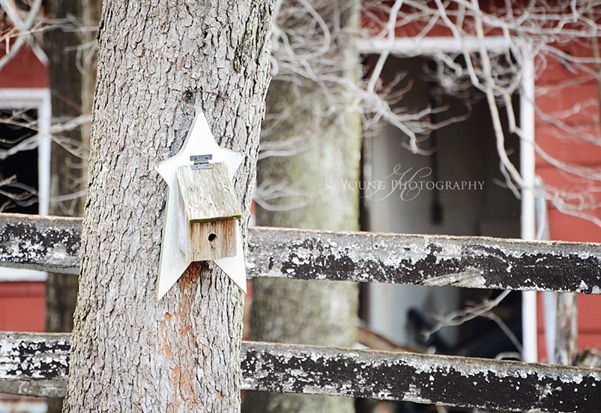 And I amused myself taking photos of bird houses.

For all of the shots in this post, I had the camera set to Aperture Priority mode, 5.6 using the long lens (70-300mm VR) with the ISO set to auto. For editing in PS, I used TRA’s Oh,Snap! plus Florabella’s Ambrosia, both set to about half on the opacity scale.

Four years ago, none of this lingo would have made sense to me, so I guess I’ve come a long way, baybee. 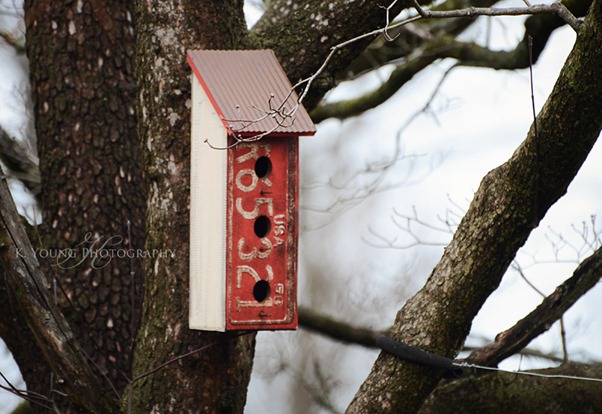 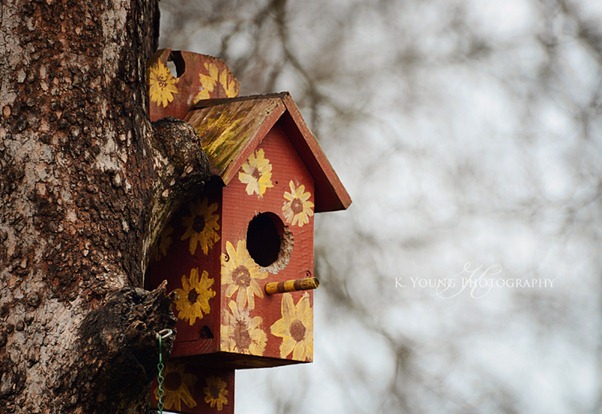 The bird house that has been here for years and years. It was here when we moved in, back in October 2008. And I heard it was here long before that.

See how gray everything is? 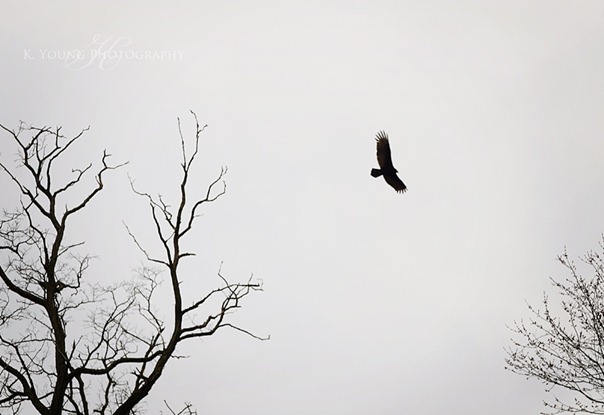 The chair that I was sitting in had dried, at least, as I watched this turkey vulture circle round and round the northwest side of the property. And then he perched in one of the black walnut trees. 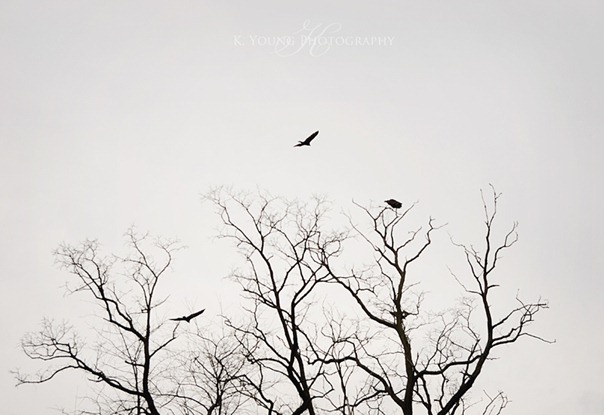 And then all his crazy friends began coming around.

The dog doesn’t like when this happens. He has taken it upon himself to be the chief ridder of turkey vultures (among other varmints) on the property. They have to roost somewhere, but they can roost somewhere else as far as he’s concerned. 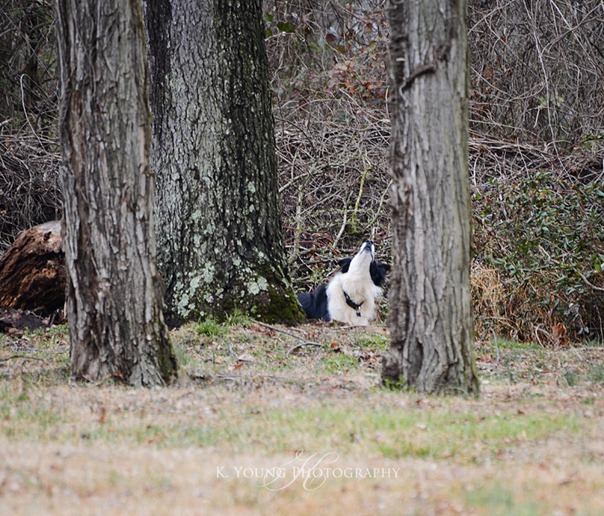 Like I said, he takes it very seriously. George is not a dog that barks, but he waited until they all perched and then let out a loud and vicious one.

And they all scattered. 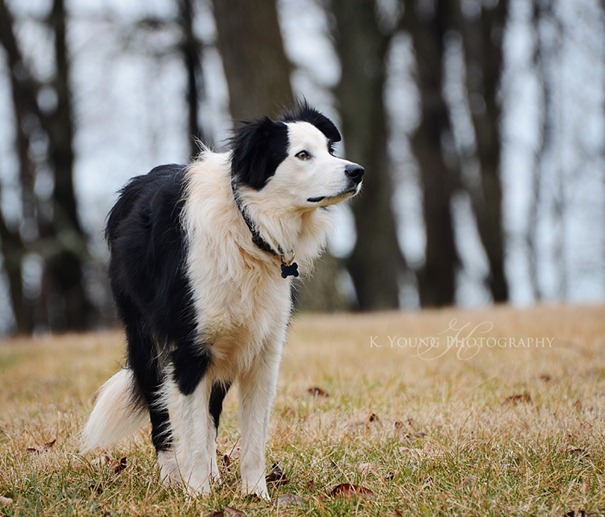 He made sure they were on their way, too, watching them until they were out of sight. 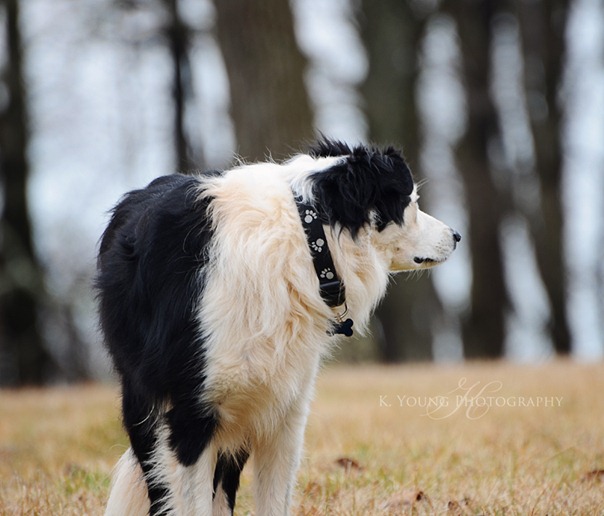 And making sure they didn’t circle back around behind his back.

(he has a new collar again. my husband loves buying these for him.) 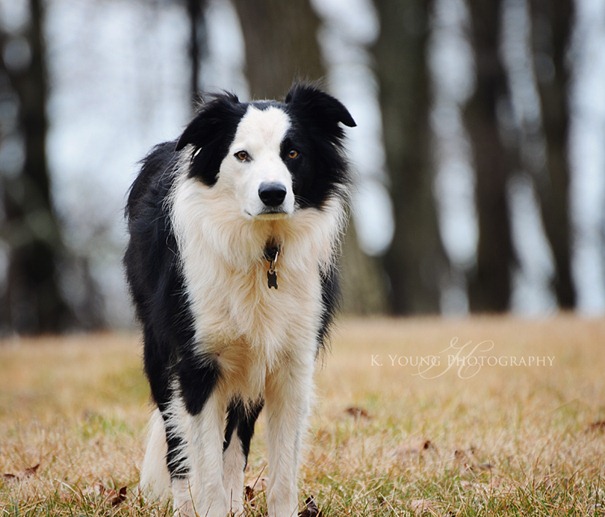 I called to him.

(God, I love this beautiful dog). 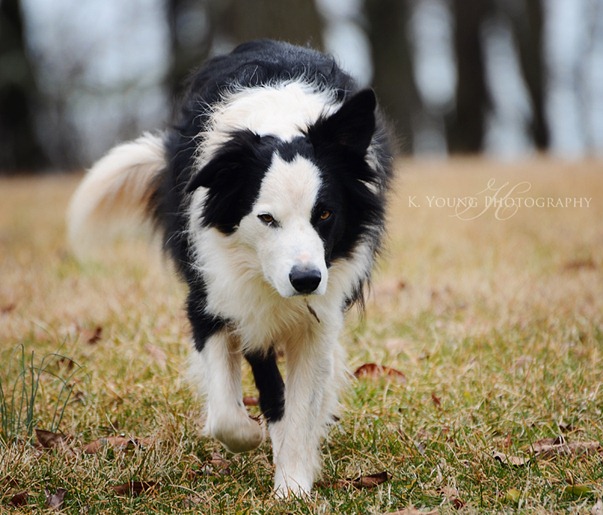 I called him to come and he came for pets and listened as I told him what a good boy he was. 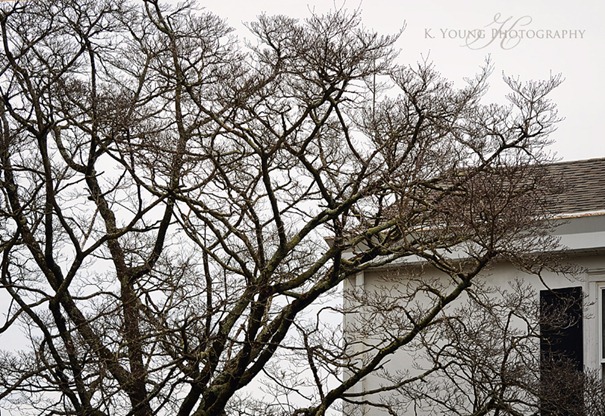 Thanks to those of you who answered my Friday night fill-in-the-blanks. Saturday morning was fun reading all of your answers while I had my coffee.

Thanks for coming by. Hoping your Sunday is a good one ~

turkey vultures are so beautiful when they fly...when they land, not so much.

glad you are feeling better.

I love the intensity in George's eyes! He does not want those birds in his yard! Glad you are feeling better! xo

It looked like he was just giving them the evil eye! :)

You make even a grey day look lovely. And good boy George, good boy! Glad you are feeling better!

All this left me with one big smile. How peaceful! Glad to hear what was ailing you has left. A big hug to George!

he truly is a beautiful dog and i bet in his mind he occasionally calls you "baybee"....
well, after master of course:)

ps...the gifted birdhouse is super cool, especially when we see it through your eyes !

oops....and of course you know how happy i am that you're feeling better, but i would think with all that wine you drink, your body would be used to those grapes.....snort....snort.....cough...gasp....oh god, i couldn't control myself on this one :)
xoxoox

We call them turkey buzzards....so sad all those tornados

We call them turkey buzzards....do sad about the tornados

I love 'that dog' too!
He waited till time to bark, what a good boy.
In Jamaica the turkey vulture is called 'John Crow' and songs and stories tell of his activities. . .

You make me wanna get my next camera. . .

Such gorgeous pictures! I especially love the tree tops and the birds landing and taking off.

Good to hear that you are feeling better again. It is always frustrating to feel lousy and not knowing what's the cause.

It was also a very mild day here, went to have lunch in the countryside. Overnight, though, the little pond in the garden built a thin cover of ice, again. Took my cup of tea and went under the covers after seeing that.

A wonderful Sunday to you,
Merisi

PS.:
I love what you do with these "layers", even though I have not the faintest idea how you do it. .)

There are so many things to like in your post Kate. One beautiful dog goes without saying - one super collar - all these lovely collars must make him know he is a beautiful dog. Love the flowery bird box too.

Glad your body fought off the effects of too many red grapes.

Turkey vultures in the garden? Whatever next - at least you have a guard dog to see them off. They don't know that he is as soft as butter do they?

It's been grey for a few days here as well, and we also dodged the tornadic weather, thank goodness. My there are a lot of suffering people from Friday's storms. Just sad.

Enjoy your day, and scritch that pup of your's behind the ears for me.

Beautiful pictures, especially the ones of George. Thanks for sharing.

George is so handsome.

I have a friend who ate too many grapes. He went to a dr's appt and had a test and when it came back the dr freaked at the high sugar content. too many grapes can do that. someone once told me, one shouldn't eat more than ten. just sayin' !!!
George is magnificent. Period! .

I love birdhouses. I had a friend that made birdhouses and would give them away. He had a gift. George looks pestered by the big birds, thank goodness he has you. :) Today will be in the 70's going to walk around the lake today.

Does George take a bad picture ever?...

Love Peg's birdhouse!.. and the feel of those pics.

Happy to hear you feel better! Love all your bird houses! I love the photo of George with one ear up and the other down coming towards you! He's such a handsome boy!

Have a relaxing Sunday!

big shiny crush on that
gorgeous dog of yours
.....how beautiful can an
animal BE!?!?!
wow.
enjoy the last sips
of these gray days,
Jennifer

I'm just doing a bit of catch up. I'm glad to hear you're feeling better after whateveritwas. I love bird houses. I'm drawn to them. These are great. George is a cutie, no doubt.

Glad you are feeling better! LOVE those bird houses .... and George steals my heart of course :)

Oh, love George! Can't wait to meet him. Glad you are feeling better. We've had some sort of mild bug around here as well. Your tree blooms are much further ahead than my trees!

Oh--some lovely shots of the lovely boy! I love the one of him barking at the turkey-buzzards, and the one with the gleam in his eye when you're calling him. He has a personality all his own, that's for sure. I'm glad youall have him, and that he has you; and he has a very swanky collar. ;)

Things are not only budding out here--they're blooming all over, and we're supposed to have snow tomorrow! Strange weather.

Glad you were feeling much better on Saturday morning.

Oh what a gorgeous love he is. I think he and Benny would have a blast together and their varment chasing would exceed even their own doggie expectations should they team up.

Left your link on my FB page. Here's looking at you kid!

I can't get over how George actually responds to those vultures way up in the trees...it's incredible. He is just so gorgeous. So glad the "grape" illness was a relatively brief one! xo ~Lili

Beautiful photos. I love grapes too but I did hear once that too many gives you a bad tummy!

Oh yes, gotta have something for the ultimate working dog to herd!!
Love his matching black and white collar!

Oh what a beauty he is, that George!

Are you running out of things to eat on Wheat Belly? ;)
xoxo