Wherever we may roam

I’ve just returned from a wonderful weekend visiting with friends I met while blogging. On Saturday morning, I met my friends, Daryl and Reena at 30th Street Station in Philadelphia. Our plan was to spend the day hanging out in Philly and then going back to Reena’s place, a short drive away, to spend the night.

I took a lot of photos to share with you, but since I’m tired from having just returned home, I’m simply sharing a few shots taken on my camera phone. I’ll post photos from the big-girl camera soon. 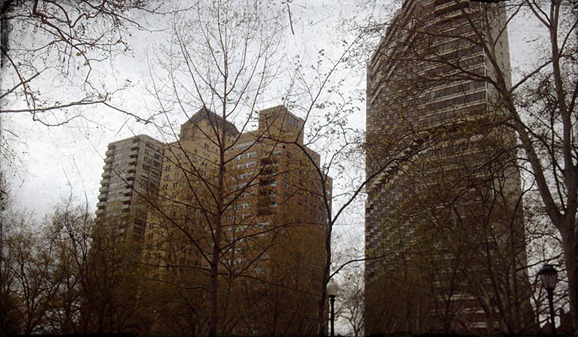 Driving down Walnut Street in Philadelphia, past Rittenhouse Square. 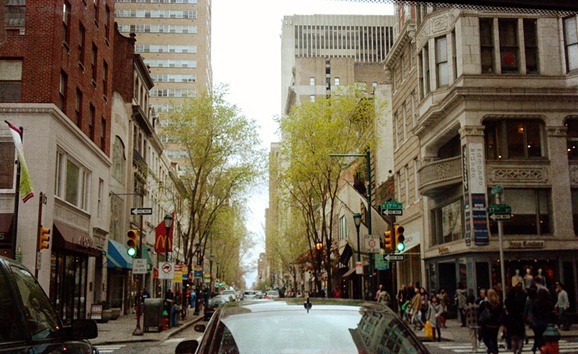 Taken while sitting at the traffic light on Walnut & 17th. Green light! 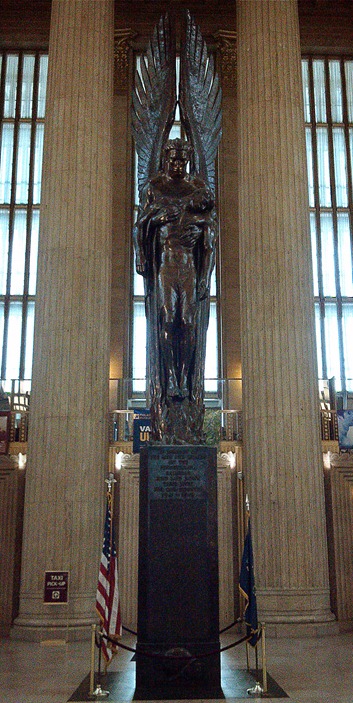 Prominently displayed is the Pennsylvania Railroad World War II Memorial, a bronze statue which honors Pennsylvania Railroad employees killed in World War II. It consists of a statue of the archangel Michael lifting the body of a dead soldier out of the flames of war, and was sculpted by Walker Hancock in 1950. On the four sides of the base of that sculpture are cast the 1,307 names of those employees in alphabetical order.   ~Wikipedia 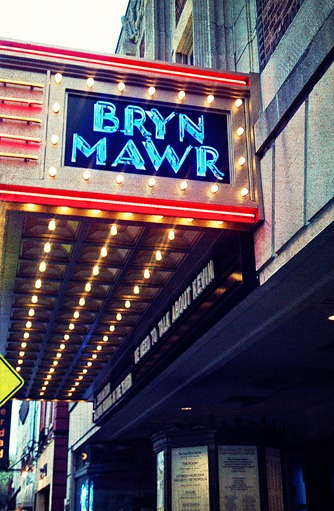 Dinner Saturday night was at a restaurant on the Main Line, in Bryn Mawr . We ate at Verdad, and met Reena’s husband there as well.  The food was fabulous and marks the first time I’ve ever been to a tapas restaurant.

Tapas are a wide variety of appetizers, or snacks, in Spanish cuisine. They may be cold (such as mixed olives and cheese) or warm (such as chopitos, which are battered, fried baby squid). In select bars in Spain, tapas have evolved into an entire, and sometimes sophisticated, cuisine. In Spain, patrons of tapas can order many different tapas and combine them to make a full meal.The serving of tapas is designed to encourage conversation because people are not so focused upon eating an entire meal that is set before them. ~Wikipedia 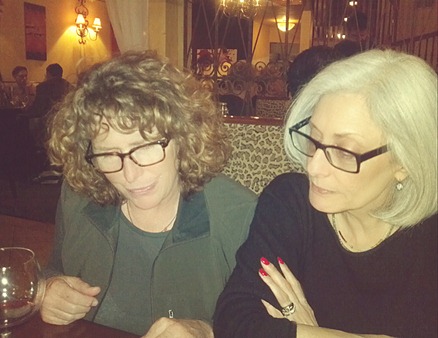 Reena and Daryl looking serious while perusing the menu. The lighting was dark and everyone but me had an iPhone and they were taking great flash photos with their camera phones. It wasn’t until the waitress suggested an app for my Droid, which I downloaded in a matter of minutes, that I was able to get some good indoor shots. The app is Camera 360 and I’m liking it a lot. 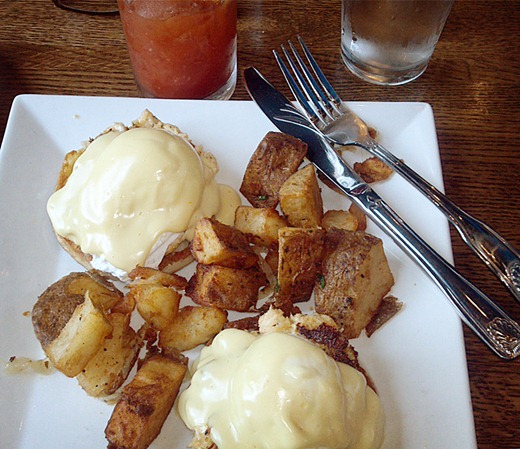 Sunday brunch at Bourbon Blue in Manayunk. Can I tell you a secret? This is the first time in my life that I’ve ever had Eggs Benedict. Shocking, isn’t it? These were served over crab cakes  and an english muffin with a side of Lyonnaise potatoes. I must admit that the crab cakes were quite good. I have discriminating taste when it comes to crab cakes, you know.

ps – still on the no wheat thing and did not eat the english muffins. 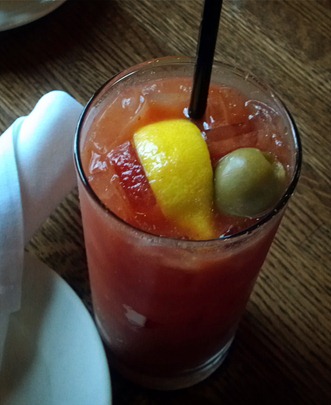 Well, it’s getting late and I’m tired and I want to go to bed. I had a little drink about an hour ago and it went straight to my head . . .

Of course, a little trip can’t be complete without a gift for my favorite guy. No, not my husband . . . although I did look for something for him. But what I found was this. 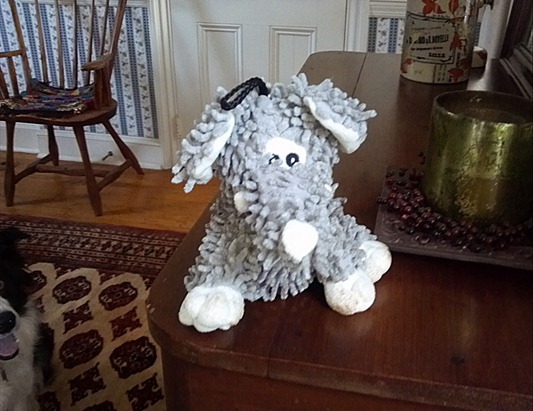 Can you spot him in the corner and see how happy he is? This little elephant squeaks, and George brought it on our walk this evening, squeaking the whole way. He kept dropping it on the trail in front of me as I walked so that I could throw it to him. All in all, a most pleasant way to come home.

Until tomorrow, my friends. I’ll have some more photos to share soon, but in the meantime, I’m sure my blogging friends will soon have something posted about our trip. You can visit them here:


Out and About in New York City (Daryl)

What a dream of a trip!

I can see George's excitement.

glad you were able to get out and relax a little.

I am so glad you had a good weekend.......I was thinking about you.
I am impressed you are still doing the no wheat????
Results, please????

I'm glad you had such a nice weekend! That angel statue is incredible...wow! And my daughter introduced me to tapas bars when she came back from France...yum! I have never had eggs benedict either, but my husband loves them. And that is a look of shear joy on George's face...happy dog, happy dog!

Sounds like such fun. It's great to finally meet virtual friends!

Yes, it was a wonderful weekend! Good food, good people. Even with the cloudy, rainy weather. Love seeing George waiting for his gift. Let's do it again soon, my dear friend.
xo

Glad you had a good weekend. I've never been to that city..and it looks amazing. Look forward to more 'field trip' stories.
Ha, that song. My sisters and I laugh, as our Mom sang it to us as little girls!

I've checked into the wheatbelly diet, but not sure I can do it! How is it going?
I've never been to Philadelphia--I want to go there so badly!

Sounds like a nice time...a lot of "firsts". (I love eggs benedict.)

That picture of Daryl and Reena is fantastic.

What a fun weekend.

Glad you had a fine day. I love when fun bloggie people get together. And I know that all three of you fit that bill.

gosh
I walked those streets for years, knew every crack in the sidewalk, all the buildings. . . alien, intriguing place now in your photos - like a previous life. What fun it would have been to BE there with you!

The 30th St Angel is special to me from small childhood. and that vacuous sound in the station like all the din of the world. . .

thanks. gonna "pin" this!

It was a great weekend .. wonky weather didnt stop us ... what amazing friends I have! Reena is right we need to start immediately to find a date that works .. xo

What a great way to spend a weekend...and a homecoming all girls should experience :-) Love your phone pics!...

I had forgotten about that song in the movie...I got the chills just watching that snippet!

looks like a fun weekend. I've never tried eggs Benedict. looks good.
George's toy is so cute. I bet he had a great time with it!

So you both get more exercise...bending over and throwing. He's helping you work out.

And thanks for the menu update. I was all ready to report you to the Wheat Belly Police. (Not really.)
xoxo

What a wonderful trip...so wish we could have met in NYC! Hope you are having a wonderful week so far. Well, it's only Monday...lol!

Seeing green on the trees in Philly was instant satisfaction for me...I can't wait for them to pop out here! Oh what a fun time you must have had. The angel sculpture must be awe-inspiring and an emotional experience to see in person. Hey, it's not often you get a good tip from a waitress! haha Great photos from your Droid. Fun toy for George. xo ~Lili

i just know you must have had the best time ever!!!

and if you ever come to visit me in wisconsin, we'll eat at a tapas restaurant......

as our most favorite place to eat, just down the street from us {that we visit once a week} is tapas :)

i can't wait to see your big girl photos :)
xoxoxo

that made me smile...

so glad you had a good time, it sounds wonderful!

Looks like a fun trip! Stop on by and say hello. :)

George is one lucky dog! Looks like you had lots of fun!

That bloody mary looks beyond amazing and that little elephant - made me smile. Have a great day.

wow sounds like you had a fun trip...that is so cool you got to spend some time with your blog pals

Good times with friends!!! What a treat!
You have me craving crab cakes now!