Dreamy. And a little history.

What a difference a few days make ~ things seem more on an even keel and not so out of control which is pleasant.

Last night, because Smash didn’t air (the State of the Union Address was on), I worked on some photos I had taken at Christmastime in New York. By the way, if anyone knows where I can catch last night’s episode of Smash, please do say. I can’t find anything reliable online. 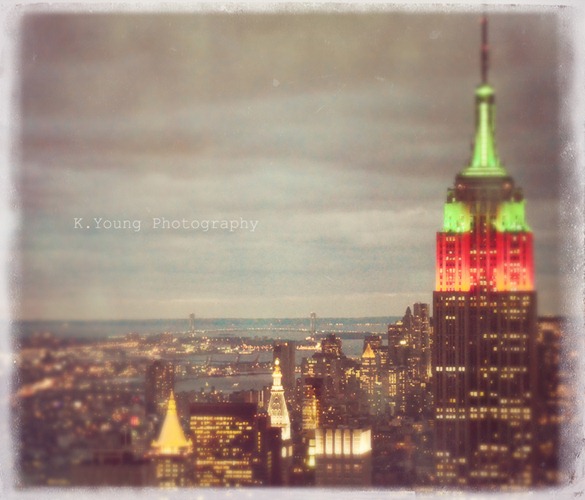 I was going for dreamy. 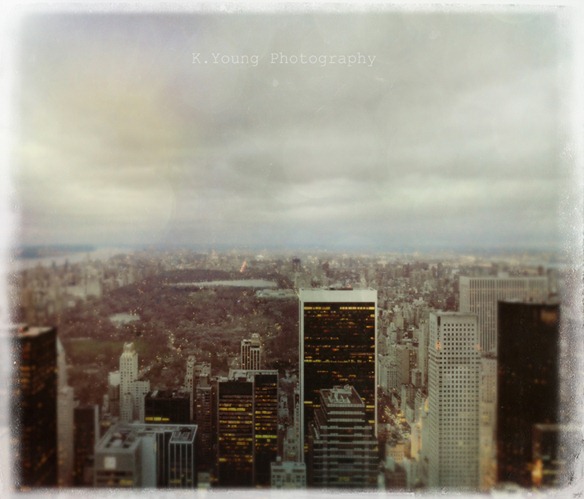 You can see almost all of Central Park here. 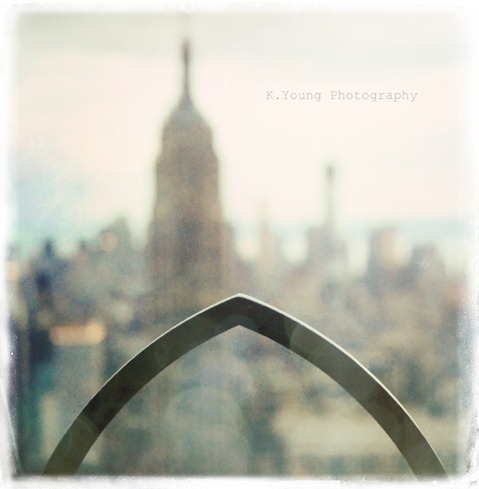 I love this blur, and I think this image is my favorite.

I love the pink tones, too. 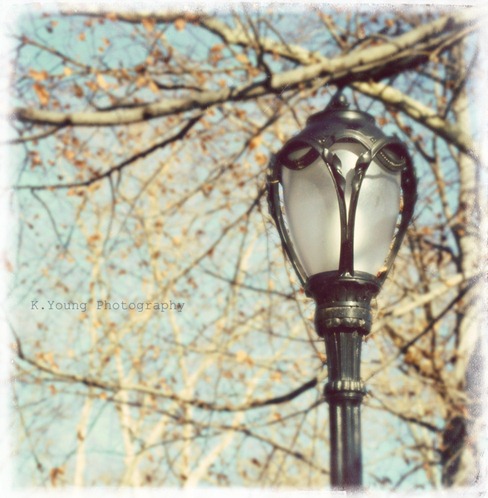 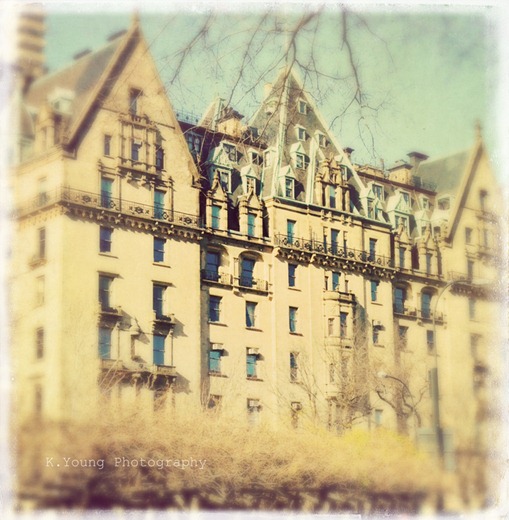 This is The Dakota. Located at the corner of W 72nd St. and Central Park West, it’s probably one of the city’s most exclusive buildings. According to legend, The Dakota got its name because at the time that it was built (1880-1884), the Upper West Side of Manhattan was kind of like a no man’s land. It was very sparsely populated and “as remote as the Dakota territory”. It’s more probable that it was named because of its then owner, Edward Clark’s, fondness for the names of what was then the new western territories and states. I guess he just liked the name Dakota. A figure of a Dakota Indian stands guard high atop the 72nd Street entrance.

As an aside, Edward Clark was the head of the Singer Sewing Company and his apartment here boasted floors inlaid with sterling silver. 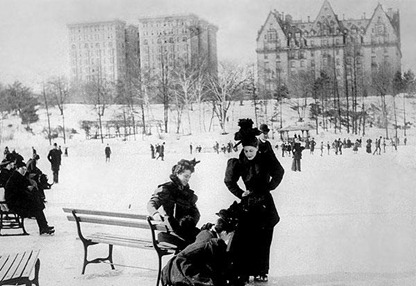 An historic photo taken in the late 1800’s on the frozen lake, showing The Dakota in the background. I’m not sure what the building on the left could be. Daryl? 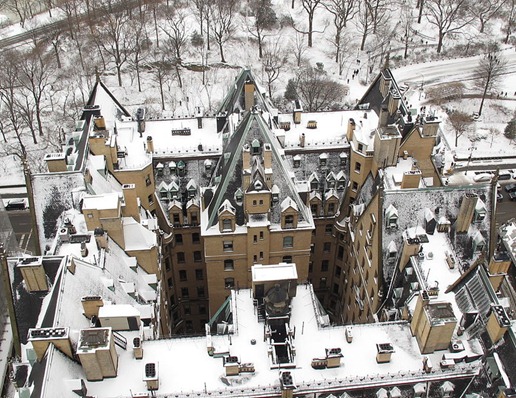 And here’s an aerial photo of it in the snow, taken from behind it and looking toward Central Park. The building has its own in-house power plant with boilers powerful enough to heat several nearby blocks.

And that, my friends, concludes our lesson for today.

Are you able to get Smash On Demand with your cable company? I will have to check mine. I also get Apple TV and think it's available through that.
Great photos today!!

That first photo of the Dakota is so pretty! I've only ever been to Central Park once, this past October, and took a photo of a building right by a "Central Park West" street sign and now I'm wondering if it could be the Dakota? Would you be able to tell me?

The photos are beautiful! I really like the first one and the lamp post. I've never been to New York but I love seeing your photos from your trips.

Thanks for the history lesson about the Dakota. Love the photos.

These are wonderful! Much better than the history lessons I had in school!

Thanks for the tour and the lesson and the photos! And thanks for putting that happy Simon and Garfunkle song in my head..... It's one of my faves :-)

They just dont make em like that old girl anymore....lol

Lesson learned and I like the "groovy" street lamp

What a fabulous building. I know it from films and general NY reports but knew nothing about it....thank you!

Smash didnt air so there'd be no place to see it, it wasn't aired anywhere .. next episode is next week ... did you see Downton?

i am scratching my head here thinking about what building that is to the left of the Dakota .. its The Majestic
http://en.wikipedia.org/wiki/The_Majestic_(New_York_City)

I am sure this article has touched all the internet visitors, its really really good post on building up new weblog.

I always think of John Lennon when I hear the Dakota mentioned.....a sad chapter.
But your images are lovely as always, I too love the dreamy blur with Empire State Building in the background......sweet.
Happy Valentines DAY!
OX

Smash is one of my favorites.

I love your pictures.

Old architecture can be quite striking and beautiful. Very nice, as always.

I love history, field trips and your view on things. Thanks. Happy Valentine's Day~

Thanks for really cool lesson. I saw the pics on Facebook and fell in love with them. Especially the blurred one. It's gorgeous.

Lovely! I recognize some of those scenes although the ones from atop 30 Rock bring back memories of clinging to the inner wall...

Hi there to all, how is all, I think every one is getting
more from this site, and your views are nice for new visitors.
my web site :: pizza games mario

Nice post. I was checking continuously this
blog and I am impressed! Very useful information particularly
the last part :) I care for such information a lot.
I was seeking this particular information for a long time.
Thank you and best of luck.
Also visit my blog post :: pizza games online for girls

Great pictures.. Dakota's looks like a beautiful building with lots of history.. Thanks for all the information..
New York City has so much to see and places to go to , I have been there once and it was big and spectacular..The buildings are so huge they make me feel so small.
Thanks for the info and have a great day~!~! ta ta for now from Iowa:)

You can make me yearn for NYC like no-one else. Gorgeous pics. There was snow when we visited too - magical.
♥
BB


Above, A very interesting link about the Dakota, which is where John Lennon lived with his wife Yoko until his death.

So, so beautiful. As always;)

I think your favorite is my favorite, love the dreamy quality

As usual Daryl is right, Smash didn't air at all
the 2nd epi will be next week

i love your dreamy world here....and you're a smash girl? i had no idea.

i'm not....i think there must be something else on that i watch at the same time as that :(

I adore these shots! You know I love the dreaminess! And the building is cool...i always like a little history lesson. Have a wonderful and peaceful weekend!

Love your dreamy shots! Not a smash fan but do hear it is very good. Just started watching Scandal. Now I'm hooked. Hope you have a great weekend, my friend!
xo

These are g.o.r.g.e.o.u.s. CG!
Dreamy you got...no doubt about it.
An app? Texture or two? (am especially fond of the "frame" effect w/that gentle blur).

I loved seeing your soft and dreamy take on NYC...it makes it appear very romantic. And I did not know that about the Dakota, so it was good to learn a new association for it. xo