I guess it all adds up to joy in the end

I’ve been sitting here wondering how to start this post. So far, I have erased half a dozen paragraphs and this could very well be the next to get the ax. The thing is that I really don’t have much to say but I do want to share a couple of pictures with you.

This was our sky this morning. 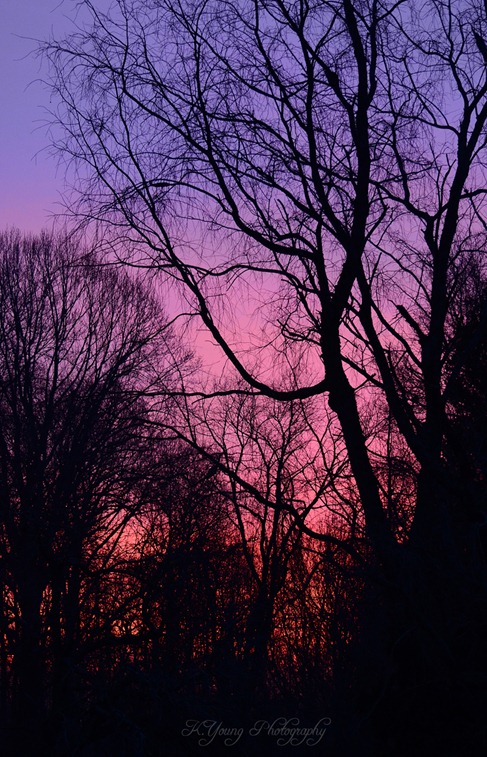 The colors were absolutely exquisite, as you can see.

I came downstairs to get my blessed cup of coffee and saw this beautiful glow from the eastern windows of this old manor house. I was running a little late as I reached for my camera, making sure the memory card was in and not having time to change the lens. This was taken with my bird lens (which is what I call my 70-300mm) and is SOOC (Straight Out Of Camera).

I love that so many of you wrote to say that the hawk and woodpecker story was actually interesting. And I’m here to tell you that – and this is no lie – the exact same thing happened again on Sunday.

As you remember, the sharp-shinned hawk showed up and all the birds scattered, except for the few remaining in the bush and a hapless woodpecker who was clinging to the side of a post for a full half hour while the hawk looked on from above. 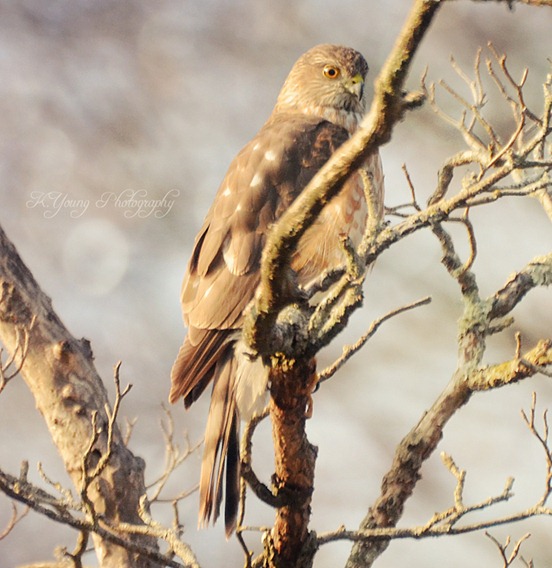 He came back again on Sunday.

And he perched at the top of the dogwood tree. 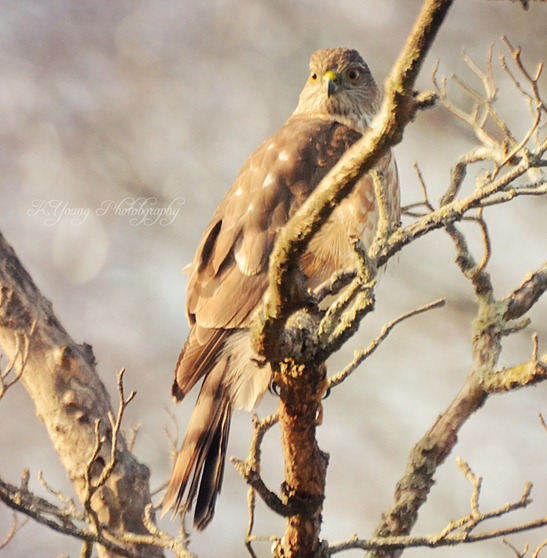 He has quite the view from up here, but he can’t see the little woodpecker on the other side of the post that sits halfway between the house and the dogwood tree.

The hawk didn’t stay for long this time. And we could see from the window that the little woodpecker remained very very still. 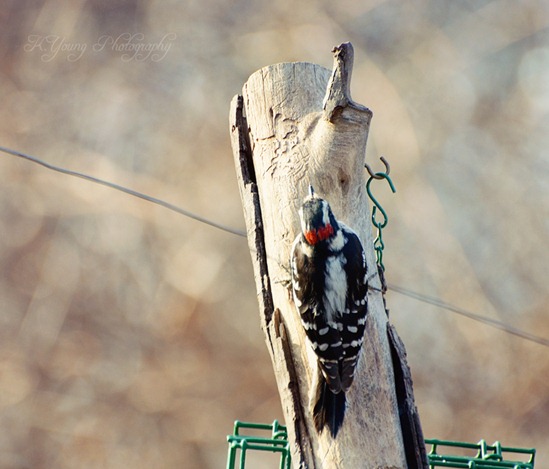 That hawk flew away after only a few moments, but this woodpecker must have been in shock because he was still in this same spot 20 minutes later when I took this photo. I didn’t want to spook him so I went back inside.

Heard this on the radio today, and liked it. It’s a song by Josh Ritter and it will be available in about a week on a new album called The Beast In Its Tracks.

Is it old-fashioned to call them albums anymore?

I think yes, it probably is.

i guess it all adds up
to joy to the end

That hawk is amazing, even if he is terrorizing the rest of your birds...poor little woodpecker! And that sky is gorgeous, we've had a few sunrises like that lately too...just beautiful.

I'm off to check out the song. I hope your week and your words will be easy for you!

Beautiful music...joy. We do need a double dose now and then.

I find it fascinating that the little woodpecker becomes so still and just waits until the hawk is gone.

We have hawks in our valley. Not many trees for them to perch on, so they rest, wait and watch for their prey from fence posts.

Oh goodness..... I don't think I have ever seen those colors in a sky before. Thanks for sharing.....

And seriously, you are so hip. Like the music.

I sense some melancholy and you certainly have reason for it if so. But here's hoping for some happiness in something totally unexpected. That's the best kind sometimes, in my book!

Those colors of the sunrise are gorgeous!

That woodpecker knows it is prey to the hawk! Our son-in-law has the theory that a hawk carried off one of their chickens that had a broken wing.

Lovely photos of the Hawk and woodpecker. You always have such interesting posts, photo and word wise. Happy Wednesday!

Wow that sunrise is beautiful and SOOC Too! Great job catching it's beauty.

Oh my, that's a gorgeous sky. And I saw some of your hawk photos on facebook and have been meaning to make it by here to see them... wow!
I know they are predators, but I just love hawks. Then again, I love the little birds, too, so I am glad the woodpecker made the right move.

That's an incredible way to start your day with a sky full of so much gorgeous color. What a fabulous photo. Great bird photos too. They're so pretty.

Love the hues from the sky and so as the mini story. It reminds me of those lazy idle days just staring at the garden observing things usual routine. Love it. Got my eye on your next posts.

bird and animal behavior IS fascinating !!!....mostly because i think they are so similar to us :)

LOVE your birds..... and that song is awesome! Thanks for a GREAT start to my morning!

So ... come tell me why you had to delete so many attempts at a post ..

The sky was gorgeous and I am glad you shared it with me since I missed it. I am thinking one day that woodpecker is going to make a mistake and WHAMO! The hawk's patience will pay off.

The sky was gorgeous and I am glad you shared it with me since I missed it. I am thinking one day that woodpecker is going to make a mistake and WHAMO! The hawk's patience will pay off.

That WP knew he was there, cause around my house they don't stay still for a minute

that sky is so incredible ... i love the skies in the early mornings now ... so intense. we still have lots of snow which makes things even more reflectively interesting! great pix of the hawk ...nature is predictable but also full of surprises. that woodpecker has good survival skills! ~chris

Such beautiful shots of the hawk, but I'm relieved the woodpecker was able to hide, poor thing. Thank you for the song - I needed it today! Oh, and oh my gosh, thank you for sharing that sunrise!

It's been too long since I have visited here (a week?) - adoring your hawk and dog pics. Which lense Kate? Is it just me or does everyone leave here a more peaceful soul that when they arrived?
♥
BB

So beautiful. As always. I say album too. I love Josh Ritter. xoxo

Your morning shot is gorgeous as is your lovely hawk. Just yesterday, I watched a similar scene of all the birds scattering and a woodpecker and dove remained perfectly still for a good 10 minutes. I looked everywhere but couldn't see where the threat was.

Animal behaviour is so fascinating. You were lucky to get to see this predator/prey action play out before you. After your previous post about this incident, I thought about a photos I'd seen a while back. A bit of Googling brought it to my screen.. and now to yours.

Wow--what clear pics of the hawk and the woodpecker! That is the first time I've seen that kind of hawk, I believe--we have so many red-tailed in this area. I have a thing for them--I know they're predators, but also loners. I guess I can identify a little!
Hoping things are good. :)

Love that sunrise photo! I never get up early enough anymore to enjoy those:)

You are certainly making that hawk happy with all your bird feeders:) He must think you are doing it all for him!