My husband turned 57 today and the weather has been the most pleasant it’s been since May. It feels like Maine weather and I love it. His folks came to visit for a little bit this afternoon and it was quite nice. His mum came bearing a homemade trifle (his favorite) and my husband’s eyes lit up when he saw it. I had told him that for his birthday, I would pick up crab cake sandwiches for dinner and now we could have trifle for dessert. But after they left, he told me he’d rather not have a big dinner, and asked if we could do something small. I know him . . . he wanted to have room for the trifle and if he could have had only that, he probably would have.

The following images were all taken with the camera phone in my Samsung Galaxy S4. I think I opened one or two up in PS to process and the others were edited using Aviary, a free download on the phone. 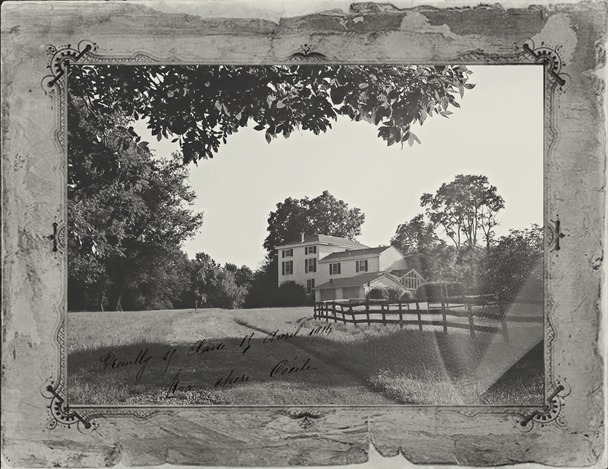 I took this one coming up the driveway last week when it was hot hot hot. Got the frame at Pave Sigaut on Flickr where there are a number of cool textures and frames – all free. 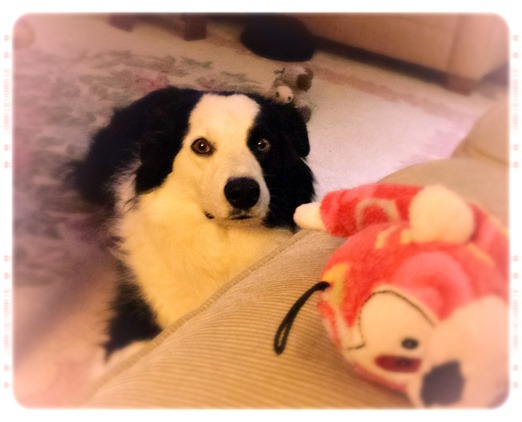 George gets a new toy.

And he hasn’t let up for days with wanting it tossed. 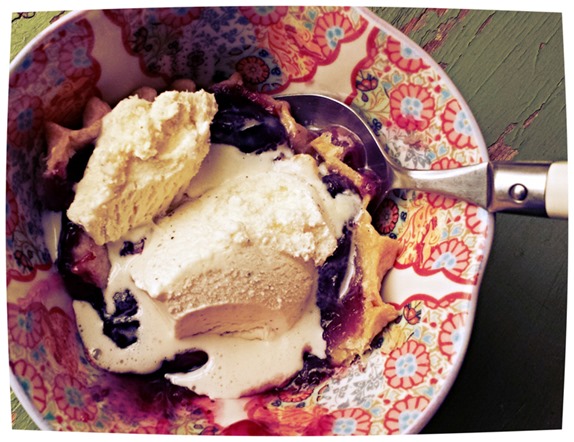 I had blueberry pie last week that I warmed in the microwave and topped with ice cream. 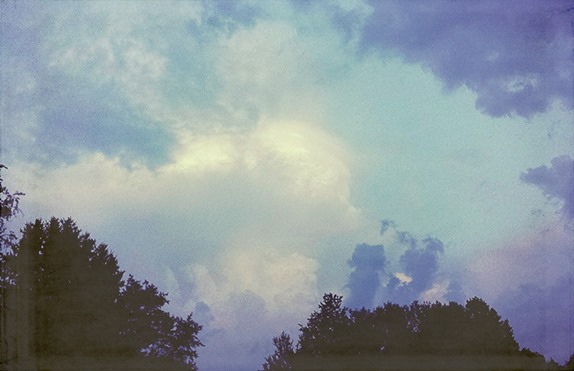 The sky one recent evening. 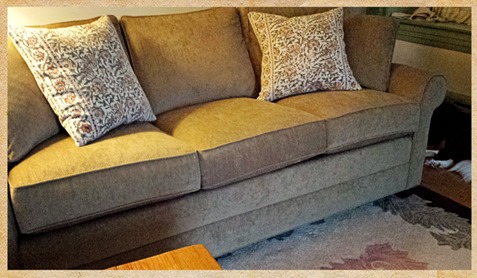 And the new sofa, which arrived yesterday afternoon from Ethan Allen.

I ordered one in their Express line, which took just over three weeks from the date of sale to the arrival date (and it was on sale).

I don’t really have much else so I’ll be back later.

What? No photo of the trifle to drool over? No fair!

Glad the couch made it in time for his birthday!

I love that first pic. It reminds me of the types of pictures that my mom and her sister made in the 50's. I love, love, love it!

I am happy to hear from you.

Happy Birthday to your husband!

That is a nice new couch! Hopefully it will prove to be comfortable.

Yum! I believe I could enjoy some Trifle!:-)

Beautiful images as always. Love your new couch, it does look comfy :)

I am glad to see that I am not the only one who was anticipating the photo of the trifle.
God we're boring.

Happy Birthday to your husband!!! And enjoy this beautiful weather, we sure are!

Nice to see George again, a beautiful dog. And the first pic in the frame is impressive.

his favorite trifle and a new couch...now that's a wonderful combination and now of course, my happiest birthday wishes to him !!!

The sofa is lovely.

Love your pictures and that pie looks wonderful !!!!!

Nice sofa and I'm glad it's easier on your husband. That pie looks delicions. Pie and ice cream is an incredible combination.

Joining those who were salavating at the thought of seeing that trifle! Love all the photos...especially of George. Love it that William and Kate named the prince after George!!! Can we now call him 'Prince George'? Glad that Andrew's birthday was graced by his parents and his favorite sweet, and that he now has a comfy sofa to relax on! Have a wonderfully blessed weekend! xo

Yesterday was my husband's b'day and he turned 55. We had a huge supper and then he ate a piece of 4 layer chocolate cake with chocolate icing as big as my head. Every bite.

Happy b'day to your man. Love the picture of George watching the toy. Great couch.

I love that sofa, we have such a difficult time finding a sofa and chair that we both like because my husband is tall and I'm short. The last time we got the sofa for him and a big overstuffed chair for me, works well.
How do you like your phone? I'm thinking of getting that one next.

I like the lines of your new sofa. So many are square and *ahem* boring. I'm attached to my old thing because it's curvy.

I think one should have dessert for dinner at least once a year and what better time to do it than on your birthday. Personally, I could sit down to a plate of my Mom's pumpkin pie any day of the week. *smile*

Good to hear from you. Nice to hear his eyes lit up for something!! :)

The couch is lovely! And I say give him the trifle for supper - Happy Birthday!

And isn't it marvelous that the royals named their first born after your dog :-)

Love the couch.
The toy, if I were a dog, looks great.
The pie, yummy.
The photos, like they always do, look fabulous.
Happy Birthday to your H.
And, how are you doing ?

Happy Birthday to your Hubby!!!
that PIE looks YUM - and LOVE the sofa.
and of course....I LOVE George :)

But where's the trifle???? :-)
A very happy birthday to your husband, Kate.

Honey I love that couch! Seriously love the color and everything. Great taste you have. The blueberry pie looks really good too. I think I want some blackberry cobbler now w/ ice cream. Love the black and white of the house. Great pictures this week. Have a good weekend and Happy Birthday to the Hubs!

Oh gosh, your blueberry pie looks tempting, and that bowl is gorgeous! Happy birthday to your husband. I think eating dessert for dinner is a fabulous idea!

So happy for the cooler weather! xoxo

What wonderful pictures of the happy things in your world! George is hands down the most adorable dog ever!

I have a lab who is afraid of water and cats and won't chase a tennis ball to save his life!

happy belated birthday to A ... enjoy the comfy new lovely sofa .. and i really think having just triffle for dinner on one's birthday (or any other day) is perfect

Now I am so hungry for ice cream and blueberry pie.... The couch is lovely, I hope it proves helpful as well.
xoxo

Please send along a belated Happy Birthday wish to your husband for me...Trifle for dinner sounds ok to me!....and 57 sounds young:)

I missed your husband's birthday... my bad! Wish him belated wishes for me - hoping he gets to enjoy the same sweet glimpses you share with us.
♥

That sky looked like a painting. The blueberry/ice cream shot has me drooling. I have never tasted trifle...hope your husband enjoyed it and had a good birthday. So glad your weather feels like Maine. It's good here too, but we did have our crazy heat this year several times! xo

You bought a new sofa! Yay! Isn't it exciting! I remember when we talked about sofas and you said you wanted a new one. So glad it finally happened.

I didn't know you had the new Galaxy s4. Me too! Don't you just love it! Especially the camera. It takes awesome shots. I agree with your husband ... dessert is the best part of a birthday ; )