How to get rid of skunk smell on your dog

Tomato juice doesn’t work. Sure, it masks the smell, but I promise you that tomato juice is not the remedy you need. What really works is the following solution, courtesy of a chemist from Illinois named Paul Krebaum. The article below is taken directly from ‘How to Remove Skunk Odor’ via the NJSPCA (the New Jersey Society for Prevention of Cruelty of Animals) page:

* This solution must be mixed in an OPEN wide mouth container like a bucket. It will bubble or fizz profusely, so DON'T mix it or store it in a closed container or bottle. This formula will produce pressure in a closed container and cause it to burst. Use it as soon as you make it, because it will lose all effectiveness if it is stored. It must be freshly made in order to work properly.

* Wet your pet's coat with warm water then thoroughly massage formula into pet's coat. Be sure to massage it in very well so that you neutralize every trace of skunk spray. Be VERY careful not to get any of the formula into his eyes nose or mouth. You may use a wash cloth to CAREFULLY wipe it onto his face. Leave it on for about five minutes then rinse off thoroughly (do not get into eyes). Repeat if necessary.

Call your vet immediately if the skunk sprays your pet directly in the eyes. You will know because your pet's eyes will be very red, irritated, and probably watery. The spray will make his eyes sting very badly. Your pet will not be permanently blinded but it is very painful.

What Is Skunk Spray Made Of And Why Is It So Strong?

Skunk spray contains compounds called Thiols and Thioacetates. Our noses are very sensitive to Thiols, so sensitive in fact that we can detect then in parts per billion! Thiols smell so horribly noxious because of the sulfur they contain.

The Thioacetates in Skunk spray decompose very slowly into; you guessed it.....Thiols!

You may have heard that tomato juice is the magic potion to get rid of Skunk odor, but it isn't magic, it's just an illusion. It is an illusion because strong odors such as Skunk tend to cause something called "olfactory fatigue". Olfactory fatigue happens when an odor binds very strongly to the odor receptors in your nose.

For example olfactory fatigue can occur if someone is wearing strong perfume and you are in the same room for an extended period of time. The odor receptors in your nose become fatigued and you stop noticing the smell, but if you leave the room for a while and return, you will notice the perfume again. The same thing happens with many other odors even strong cooking odors.

So when you use tomato juice, perfume or room or fabric deodorizer sprays on skunk odor. One strong odor is replacing another and it fools your odor receptors. So if you use tomato
juice or a deodorizer on your pet, chances are YOU will think your problem is solved but it isn't. Just ask a friend or family member if they smell skunk. They will! 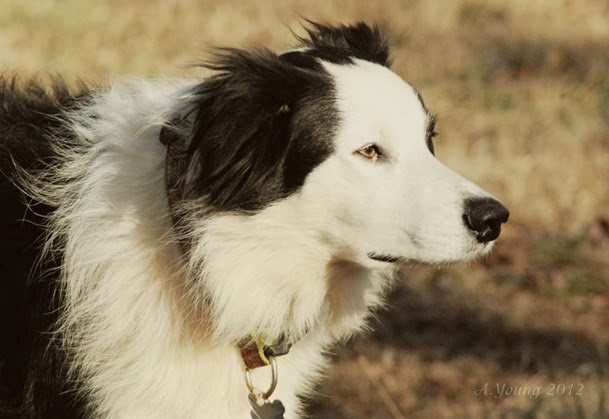 This photo is from my files but is what George looks like after being de-skunked. He’s even wearing the same collar. Had to throw the other one out because it stunk to high heavens.

Interesting! Thanks for the science lesson!
I hope he learned from his mistakes...

I've used that recipe but now just wash in Dawn dish washing soap. It does a good enough job but I don't mind the smell...and the dogs and I sleep together. Dave would gag at the smell but, for some odd reason, it just doesn't bother me. It reminds me of petroleum...?

Yup I wrote that remedy when you told us George got skunked just didn't put the measurements in lol ! I am glad George doesn't stink any more the fresh smell of skunk makes me feel sick . So far Miggs hasn't met up with a skunk but my old dog I had did 3 times YUK ! Thanks for sharing and lovely photo of George ! Have a good weekend !

What a handsome fellow George is now... actually, as always. I've used that cure two times with my sweet pup and have marveled at how well it works. But I never knew the science behind it... interesting!

Hope you have a wonderful weekend!

Thanks for the info. We do have skunks and other creatures crawling around during the night. In the morning, after she's taken care of her business, that noise is to the ground and she covers every square inch of the backyard. Thank the good Lord that the critters have been long gone by then...or I hope so!
Have an awesome weekend!!!

I will definitely remember this...makes sense, baking soda is a natural deodorizer. Poor George, he must have got very close. On accident or in pursuit? I have opossums living under my shed. One of my dogs has the instinct to back away, the small one gets right up to them. Thankfully they are quite passive. Maybe not once they have a litter. Oh, how we pet owners worry!

I recently came across this recipe, too, Kate. Years ago in Wisconsin, we had a Golden Retriever that got sprayed once and then made it his mission to attempt to rid the world of skunks whenever they crossed paths. Needless to say, we needed to find a deskunk solution, too! You'll never guess what worked. Massengil Powder! Mixed into solution and used to bathe a dog, the smell did disappear. My husband hated those skunks. Especially since I refused to go to the store and buy the powder in bulk! His dog, his shopping trip. lol I can tell you that every time he shared his "cure", mass jocularity ensued. sigh

Thanks Kate for the information.

Hope you have a nice weekend!

Glad he is sweet smelling again!!! What a cutie!

I hope to NEVER have to use this concoction EVER...yikes!

Poor George. This happened to our Daniel one night. That skunk sprayed right at his face, and Daniel must have turned at the last second because the stink went across one side of his head, his neck, and onto his shoulders. I remembered that Kat of Low Tide High Style had published this recipe, and I ran to the blog to find it. It's magic stuff, because the smell began to vanish pretty instantly (and not because my nose was tired of smelling it in this case.) For about a week afterward, there was a lingering odor on Daniel's head, but it had degraded from stinky skunk smell to an odor almost like stale coffee. I now keep a brand new quart bottle of peroxide on hand at all times ... never know when I'll need it.

After reading this I am so pleased that we don't have skunks here.

hooray for finding the 'cure' sorry about the collar xo

Oh dear, that happened to our last dog once, that smell is the worst! So glad you found the right recipe, my sister gave me that one at the time and it really does work like magic.
Poor George...

our friends dog was skunked. he was a comedian, the way he told stories. he had us hooting about it.

I'm glad you found something that got rid of the smell.

Wow---I wish I had read this last week---although I'm not sure my friends would go near enough to Beau, their bloodhound after his encounter! Poor Beau! Had I known this, I'd have offered to do it myself! :(

we had to de-skunk our car. we hit one on the way home. first time for everything :(