It’s mid-afternoon on a rather warm Sunday in Maryland. Actually, the weather is pretty great for an August day so I’m not complaining. We have been blessed with unseasonably mild summer temperatures so far this summer and for that, I am very grateful.

On my time off from work, I have been able to sit outside on the back patio, under an umbrella, and set myself up for some hummingbird photography. I have two feeders, a little bird bath, and lots of perching opportunity: a hummingbird swing, and a bush full of tiny little limbs for them to stop and sit a spell. And by that, I mean stopping for just a few seconds until they’re off and flying again.

Suckers are fast, I tellya. Here are some of my favorite shots of the past week . . . 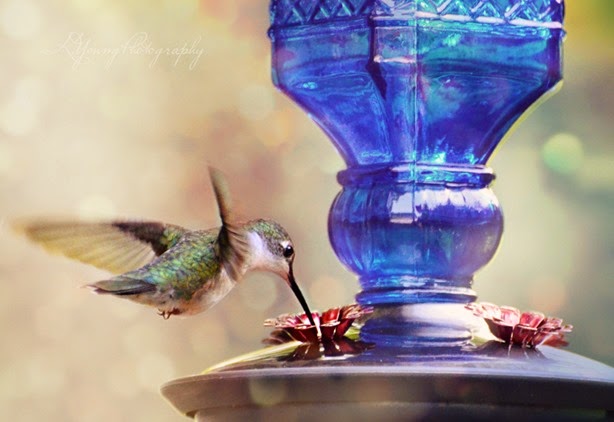 I shoot in all sorts of light. My favorite is the early morning, especially after a rain. That way, the sunlight glistens on the droplets, making for some excellent bokeh. 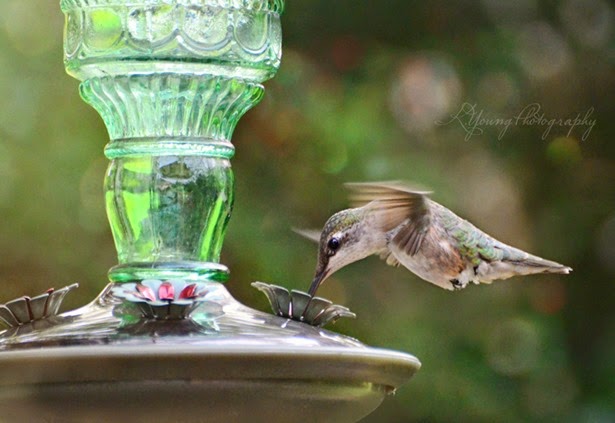 I freely admit that I do cheat during editing and add some bokeh of my own at times. Actually, it’s not cheating. It’s called editing. So there. 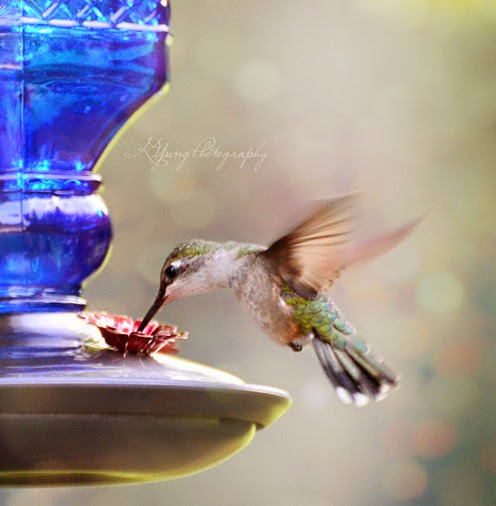 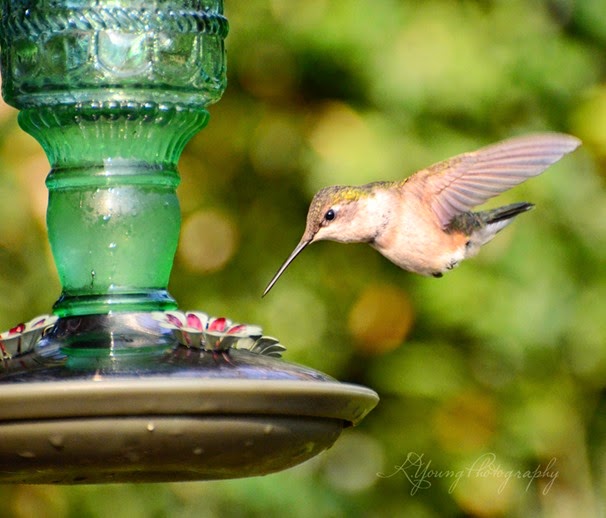 I figured that since I enjoy bird photography so much, it would be worth it to invest in a few props. So I bought two new hummingbird feeders this summer. Got them here, at Duncraft:

The ones I have are called ‘antique hummingbird feeders’ and I see they’re still on sale. 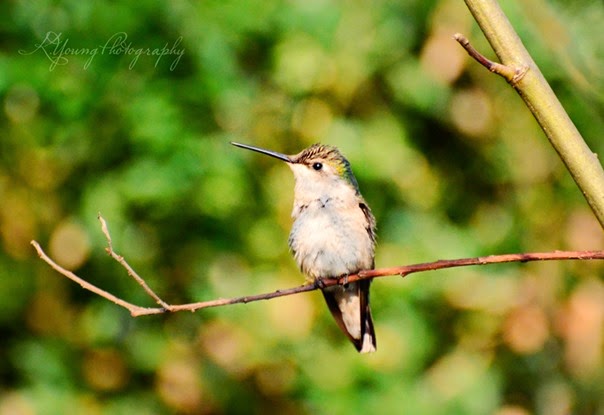 After posting some of these on my FB page, a reader identified one as a female rufous hummingbird. I believe the ones in this post are ruby-throated hummingbirds, both adult and immature males and females. Rufous hummingbirds have more of an orange cast, I believe. 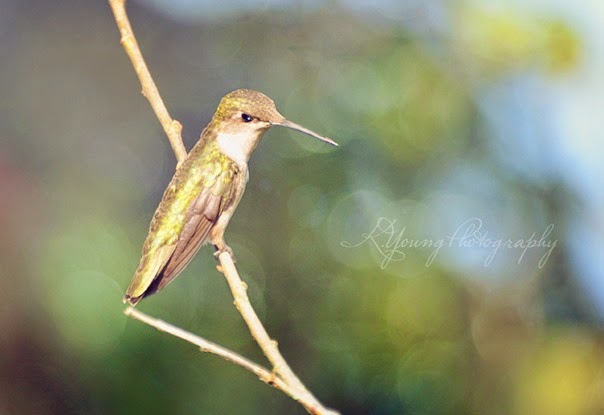 Regardless, they aren’t the easiest to photograph. But I like the challenge.

The one above is my least favorite of the bunch. I shot it this morning using the auto dial (sport mode). Many of the others in this post were shot on manual, dialing up the shutter speed (and the ISO) to get the wing spreads. 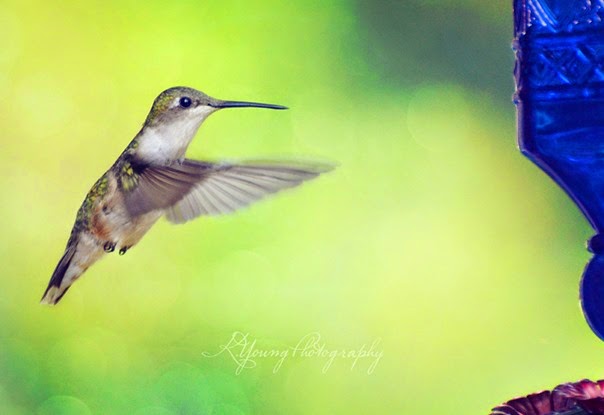 My Nikon D7000 doesn’t autofocus that well on the manual mode. Or maybe I’m just not doing it right. 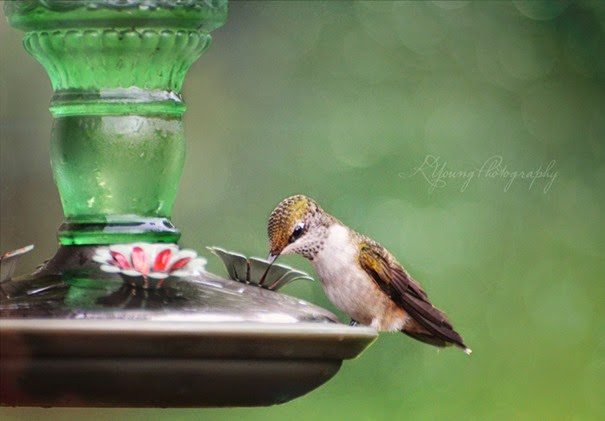 Of course, it’s much easier when they stay still! 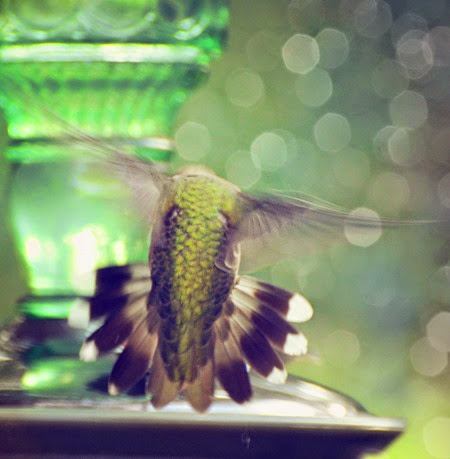 One of my favorites. 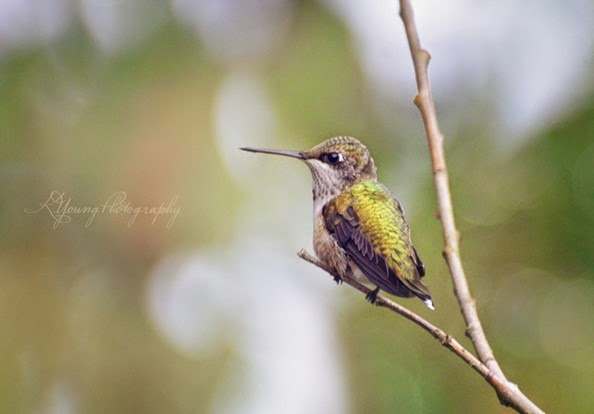 By early fall, they’ll be gone . . . off to Central America. And I read that many of them will cross the entire Gulf of Mexico in a single flight.

This is something I find astounding. 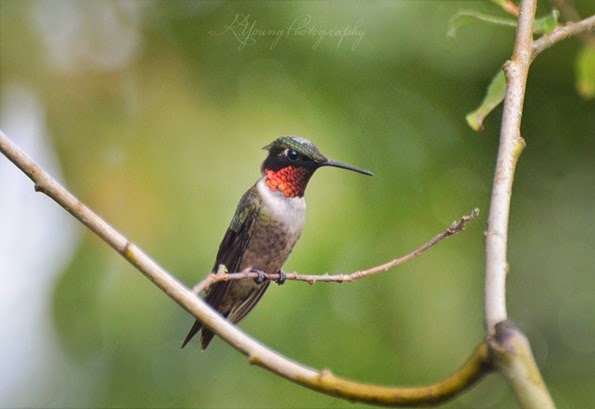 And this is the adult male ruby-throated hummingbird. 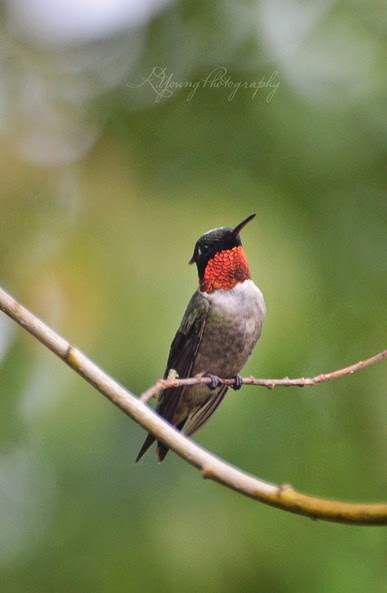 See how they like sitting on the teeniest of branches?

I’ll tell you what this bush is. Several years ago, I bought some pussy willow branches at the grocery store. It was early spring and I brought them home and put them in a vase. After they had served their purpose as a decorative piece, my husband took them outside and planted them in a big pot. He did the same thing the following year with another bunch I had brought home.

I now have a big pussy willow bush that grows in a very large pot on the back patio. It affords some great perching opportunities for the very smallest of the birds who come to visit the property.

Thanks for stopping by today. Hoping that your week to come is pleasant!

those feeders are beautiful and showcase the lovely hummers. I really like your header photo too.

I love birds, humming birds, pussy willows, blue glass, light through glass. . . . . and I love YOU!

This is a perfect post for me except 1 thing seems to be lacking?

Wow! Great photos as always. You really have a talent for this.

I think it must be the camera....mine doesn't work well on manual either.....snort.
I love your pictures...they are delightful, and you have more hummingbirds than anyone.

So, so pretty and just what I needed to cheer me up today. I was lying on my couch for much of the day and the hummingbirds visiting my feeder that hangs just beyond the window there kept me company and lifted my spirits. Just like this post did.

I enjoyed seeing your humming bird photos. Those glass hummingbird feeders are pretty. I plant zinnias for the hummingbirds, but the glass feeders are so pretty I may get one of those, too.

Marvellous humming bird shots Kate. We have pussy willow growing wild along our beck - I shall think of you now when I see it burst into flower.

great pics, I could never capture them on my little ol camera

Those are wonderful pictures! I love your 'props'.

It amazes me that they can fly so far is a single shot as they are so tiny! I would think they would need to fuel up sooner!

Fantastic photos Kate ! I to like the challenge of photographing the hummers yup they are fast little suckers for sure ! Our summer has been quite nice as well less using the AC and more windows open with breezes blowing through I like that cause I can hear all our birdies which I love to ! Thanks for sharing , Have a good week !

Simply stunning, all of these. I've never heard of a hummingbird swing, I picture a teeny tiny playground swing or better yet a hammock. These little things don't sit still long enough to enjoy a hammock. But surely they rest some time. Maybe they do like to take a swing from time to time when nobody's looking.

These inane ramblings brought to you courtesy of Monday.

Beautiful photos. Regarding the bush, what a nice remembrance of your husband. A little part of him is always right there with you. Sweet.

Here in NY, this entire summer has been unseasonably "unhot," but I miss the warmer temperatures.

My goodness, you got some really wonderful hummingbird images. I just love these little guys!

Those are incredible captures!! Such delightful birds. I wish we had them here. *sigh*

So pretty Kate - all of them! I have not made the time to sit outside and shoot birds at all this summer, and I miss it. Relaxing and rewarding.

It is pretty unlikely that you have rufous hummers - their range is commonly accepted to be confined to the western states.

In fact, we are pretty much limited to ruby throats here in the NE, though people often claim to see numerous different kinds, they are usually just seeing different female rubies, which can vary quite a lot in coloration.

Nice to come by and see what you have been up to lately!

All gorgeous. Your feeders are so much prettier than mine, I might have to get one like yours.

Those hummingbirds are just SO CUTE! I especially love the wing action, though, it's beautiful and intriguing and just amazing. And you capture it remarkably well.

How fabulous... your photos are like being in another world. One that is NOT drought-stricken and NOT filled with city visits.
Thanks!
♥
BB

Humming Birds are so beautiful! you did an excellent job in capturing their gracefulness and beauty.

Beautiful captures. The hummingbirds clearly love you and your offerings. And I love that the things your husband did for the birds continue to thrive and bring you joy.

some pretty nice hummingbird shots there!

they are quick little suckers but holy crap, you sure know how to capture them!!

and ummm, "cheat away" my little editing queen you!

that adult male…well can i just say, it actually looks like a man, or a dude…with a stern eyebrow or a strict forehead….saying pay attention!!

he kinda of made me sit up and fix my posture :)

WOW WOW WOW - these are amazing!

They're gorgeous creatures and I wish we had more of them around this year, but they seem somewhat elusive compared to last year. I miss them.

Fabulous post. I want to run out and buy one of those bird feeders and put it in my sister's yard. I live in an apartment building myself. Photos are amazing. Thanks for sharing.

Awesome photos! Put a smile on my face just enjoying them!

Such an amazing series of hummingbird photos! I know they are not all that easy to get so well focused. You do indeed have patience and skill!

Stunning photos. Love the soft lighting and blurred backgrounds. You have such a good eye- and obviously great patience! I should try for blue wrens. Jean

Those are some of the prettiest feeders I've ever seen---of course, the hummers are even prettier!

Oh you are definitely doing it right to capture the loveliness of those hummers. And of course I always enjoy hearing about more beautiful things that your husband left behind for you. xo