It’s Thursday evening and I’m watching the news. I just took a pan of brownies out of the oven and put a load of laundry into the dryer. I’m trying to get a lot of things done because I’ll be gone for most of the weekend. The brownies are one of my specialties (because I frost them with homemade chocolate icing, and sprinkles). They’re a treat for my niece and nephew. I’m going on an adventure and leaving early in the morning. My brother, Pete, has invited his twin brother and his big sister (that would be me) to come visit him and his family at their campsite on the Jersey Shore for the weekend.

I secretly call my brothers Giggles and Chuckles. You may remember me writing about Steve several years ago when he was diagnosed with leukemia. It was a sad time for our family, and a horrible one for Steve, but he is doing quite well right now, in part to his twin brother, Pete. It was Pete who donated his bone marrow so that Steve might live.

I don’t think I’ve told you lately how much I love my family. After my husband’s funeral last year, my brother Steve told me something that made me feel so good. He said he was ready to give up and it was the day that my husband and I came to visit him in the hospital in Philadelphia (in 2010) for the first time. He was pretending to us that he was doing ok and we stayed for some time until he began to drift off. I had already left the room and my husband told me he’d be along shortly. He talked to my brother, encouraging him and telling him to keep fighting. I had no idea my brother was that low, but my husband knew. He reminded Steve of everything he had to live for and all of the people who loved him. My brother told me it was a turning point for him. He knew of my husband’s battle with brain cancer and he was still going strong. I guess it gave him hope. 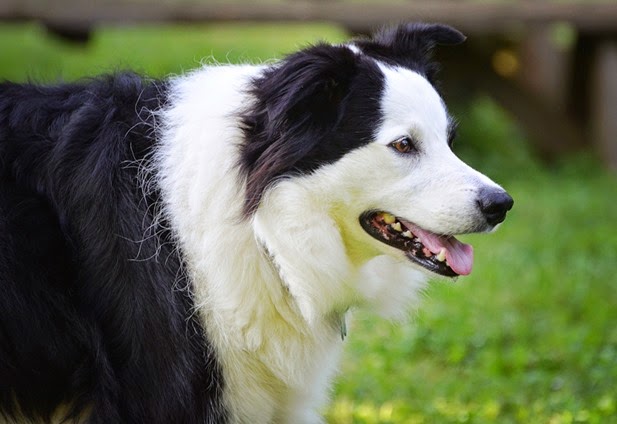 This guy is going to miss me this weekend. They told me I could bring him but I think he’ll have a less stressful time staying home with my son. 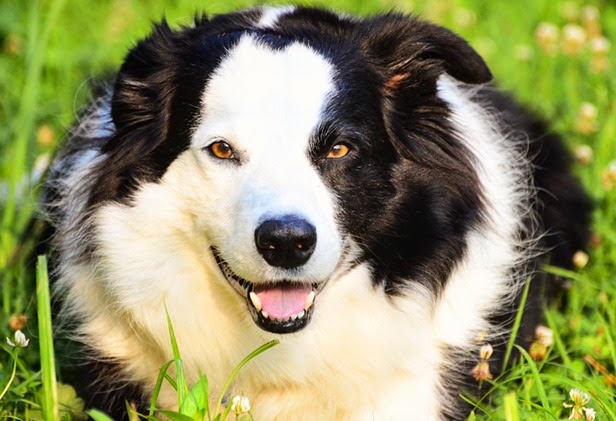 Taken on a sunny day earlier this week. 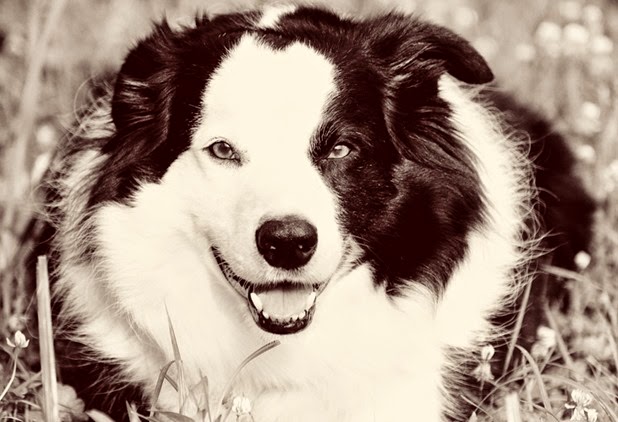 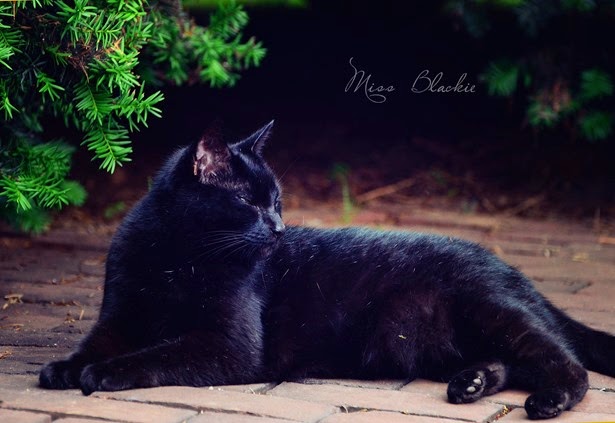 And then there’s Miss Blackie. She had a serious eye issue that began in late March when she scratched her cornea and it became infected. My son and I gave her rounds and rounds of eye drops for 2 1/2 months. Sometimes as many as 10 drops a day.

The vet was actually shocked when she went for her final checkup. It appears that her eye was saved. It’s not exactly like the other eye and it probably never will be. I’m not even sure she can see out of it, but it looks healthy and she seems content and in good health again.

But wow. Was it ever a struggle! 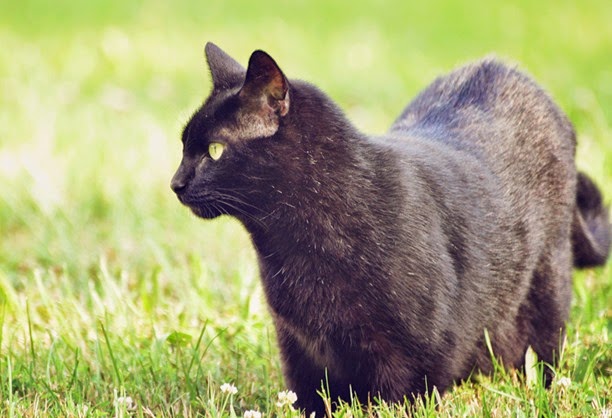 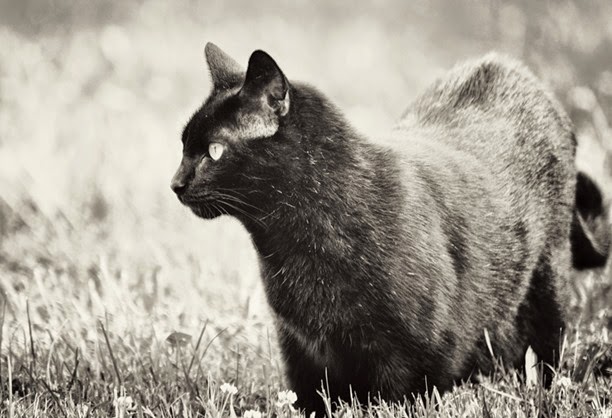 And now for something different ~

Thanks for stopping by.

took this photo of me in Maine.

Oh Honey, I feel so privileged that you shared such soulish and wonderful matters with us. Many of us do not have such family support, and this glimpse of what a family can be strengthens us on our way. Of course George always lifts!
Bravo for saving Miss B's eye.
You've helped to save something good in my eye too. <3

Kate, I am so happy your brother is doing well now. I hope you all have a terrific weekend together. Today marks one year since we lost my husband. Our kids have all checked on me and my sister-in-law took me out to dinner. We made it through a big milestone. Thanks for sharing. Hedy

It's all in the post today - photos of George and Miss Blackie - and your news of your twin brothers. Lovely to get an update on your brother who was ill and to know he is getting along OK. I often wondered how he was keeping after the initial post you wrote about both of them.

Thanks for the update
Ms Soup

Such an uplifting post! Hope you have a wonderful time this weekend!!! and glad Miss Blackie is doing better :) Give George a scratch from me :)

Your husband was your brother's inspiration. That is so beautiful. I'm glad he shared that with youand now you have another wonderful memory of your husband. Loved your photos today. The photo of you is lovely. Deb

have a wonderful time ... so glad to hear your brother is doing well

eons ago Sans our first cat had a similar eye issue .. we didnt have a lot of money and having her in the hospital for a month was impossible so we dosed her with eye drops every 2 hours around the clock .. she too recovered her eye sight ... we lost a lot of sleep but it was worth it ...

So glad to hear your brother is doing well . Lovely post and photos . Have a wonderful weekend !

Have a great time with your family. Camping with air conditioning? We have friends with those Homes on Wheels, with all the best conveniences. Love the pictures of your dog and kitty.

Those brownies sound absolutely divine! I know they will be well-received. George, as usual, is very handsome! Congratulations on being successful with the eye treatment for your cat. We weren't nearly as lucky with ours, who somehow had a similar injury.

I -love- that photograph of you, just beautiful. Perfectly you.

What a wonderful thing about your husband and his ability to encourage!
Love all pics of George, of course, but like that color one the best. I like the way his yellowish eyes contrast with the green grass.
Wow.... I've had to give eye drops to a cat... Not an easy task.
And, hey there, You!! Great pic :-)
Have a wonderful weekend!!

I check in often to see how you and the furries are doing and also to enjoy your photos. They are stunning. Glad you are having a glamping experience (with ac) and your precious family. Enjoy!

i hope you have {are having} the BEST weekend EVER…how fun!!!

wow, what a lovely thing that your husband did in encouraging your brother, right when he was suffering with the brain tumour also. Very emotional.
Lovely you can get to go visit your brothers on holidays! Hope you have a great weekend. Having close family ties is terrific isn't it?

How wonderful that conversation between your husband and brother was ... and how special that he shared that with you when you needed it too. Love your George and Blackie shots - they look so glossy and healthy. Our Middy (Blackie's doppleganger) continues to blossom in her middle years... she's 12 years old.
:-)
BB

Such a beautiful thing for your husband to do...his legacy lives on, and I know that makes you happy and brings you comfort!

I am also glad your sweet kitty is ok, and that the worst is behind her.

I'm catching up on posts, and I am so happy you had a lovely visit with your family at the shore...and not that "other" Jersey Shore, but the beautiful and civilized one that people don't often hear about! :)

so much to say and so little time! No sleep--and church will come soon with a sweet little baby's dedication!
Miss Blackie looks so healthy, as does Master George, and so does Kate, most especially!
The story about your brother & Andrew was marvelous.
What a gratifying post; glad to hear you're doing well!
Love, "Sybil"

Loved hearing the story about your husband and your brother. xo