It’s a beautiful Sunday evening as I write this and it’s been a perfect autumn day. I got a lot of things done on this lovely day and took my time doing them. It felt good to savor it all.

I started by heading to the apple orchard in order to get some fresh Stayman Winesaps (my favorite apple) in order to bake a pie tonight. There were thousands of people at the orchard and I nearly drove away when I saw the parking situation. I followed other cars into one of the orchards and then we all parked (somewhat) neatly and exited our cars. Luckily, most of these cars were full of families intent on taking their kidlets to the famous pumpkin patch. This left the farm store not too horribly crowded so it was definitely worth the stop. 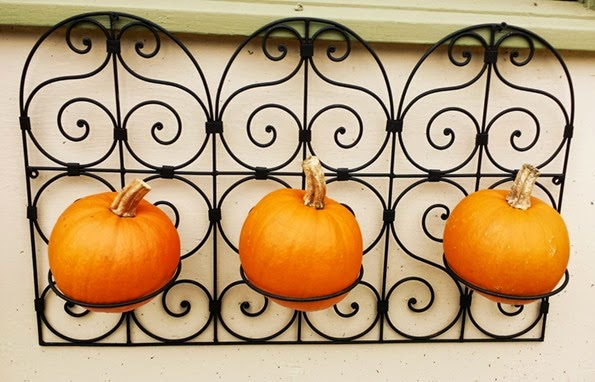 Yes, you heard me correctly. Me – who can count on one hand the number of times I have flown in my entire life – has booked a flight to Stockholm, Sweden.

In November, no less.

I will tell you more about it tomorrow. But, in a nutshell, my eldest son will be working there for two months and I’m taking 10 days and going to visit him. My son works as an architect for H&M. 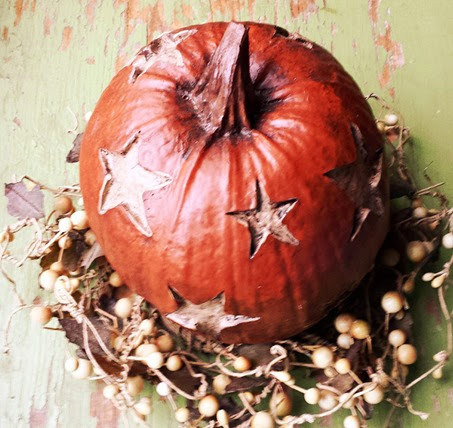 Booking this flight, and doing so much traveling this fall, has empowered me a little bit. Normally, I would never have done something as daring as this. (Traveling alone to Europe). But after a friend added this line in an e-mail she sent me, “The Kate Young I know is fearless. The Kate Young I know can do anything” . . .

I don’t see myself that way, but if she does - I thought that maybe I could pretend to be fearless.

But back to my weekend ~ 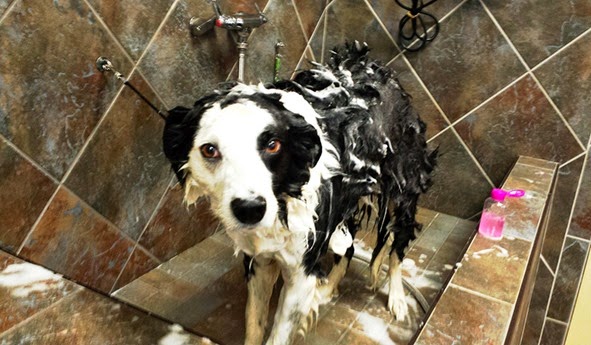 Someone was so stinky that it was getting difficult to keep company with him. So off we went to the pet wash on Saturday. I had an audience for this, as a family was there telling me how cute and obedient my dog was. Plus they were taking photos. I didn’t want to tell them that George was famous in real life on my blog. Had my sisters been there, it would have been a different story. While we vacationed together this past June, they were telling everyone in Maine how famous my dog was in the blogging world.

As an aside, isn’t this bathing station the bomb? I love it. And it’s not a strain on my back. 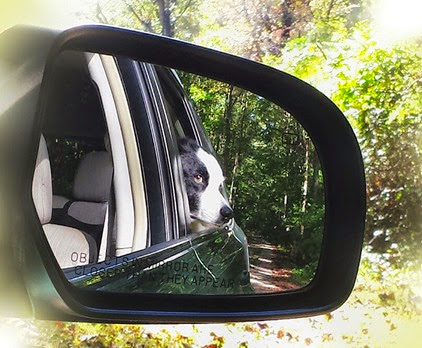 He is very clean today and enjoyed a nice long ride in the car. 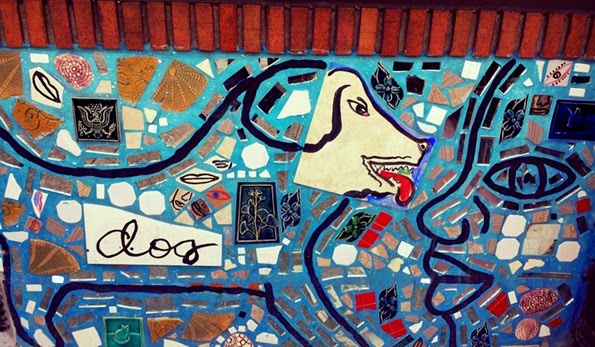 Some glass artwork on the outside of a building along Broad Street in Philadelphia. I thought it was really cool.

The ‘Dream Scene Painting’ at Citizens Bank Park, Philadelphia, home of the Philadelphia Phillies. It depicts famed players, past and present.

For a panoramic view of it hanging on the wall at the stadium lobby, click here: 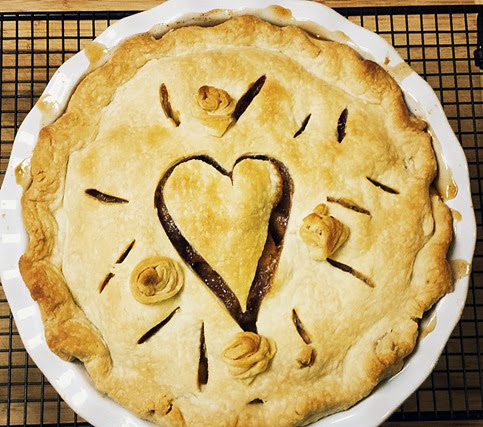 Lastly, I leave you with my famous apple pie. People I know speak in hushed tones of this delicacy. I will warn you, baking this pie gives you much power. And with great power comes great responsibility.

Hahahaha. I’m cracking myself up here. Seriously though: This pie is freaking awesome. Make it. It’s not difficult.

{The Apple Pie that wins hearts}

Last night, I watched an oldie but goodie on stream from Netflix: An Affair to Remember. On Friday night, I watched Sleepless in Seattle. The two sort of go hand-in-hand. If you’ve seen the latter, I think you’ll know what I mean.

And finally, I think it’s cool that Cadillac is playing an old Clash song on its newest commercial campaign. Unfortunately, it’s not being sun by The Clash. The original sounds so much better, as far as I’m concerned. I don’t know why I’m ending with this, other than the commercial just came on while I was writing.

And on that note, I’ll bid you adieu for the evening ~

Kate you'll be saying goodbye in Swedish very soon!! :) You go girl! What a wonderful opportunity your grabbing with both hands. Pictures please...lots and lots of pictures..:) George looks so clean and shiny . You just might need a bathing station like that at home! Shoot if i ever have a dog again i just might need that bathing station. :)
Oh ! I know what you mean abou the crowds.... We have a place here called Apple Hill. I really love to go there on a brisk cool Fall morning... everything apple! And lots of arts and crafts stuff.....But the people...Lordy the people..... its enough to make me not want to go....and thats a shame.... Maybe next weekend...we'll see... Now your apple pie though... I'm going to go check the link out right now...my hubby just might need a surprise next week when he comes home from work..... :) Hugs! deb

Girl! You are ON!

Kate, this post says a lot about how you are doing, I think. It both tugs at my heart strings AND makes my heart sing. All I can say is kudos for doing it all – the cleaning, the decorating, and planning new adventures that really stretch your wings.

My beloved maternal grandmother was born in Sweden; I have always wanted to see it. Take lots of photos and notes to share, please!

Sweden! I'm so excited for you. You deserve to do wonderful things.

Love that picture of the dog bath! And glad to hear you're going travelling - have a great time. A certain attitude is showing through your words in this post. Sounds like a good attitude to me!

GOOD FOR YOU! Can I come? I'll carry your bags and promise to stay out of the way :)
this post made me smile. George looks great. For a minute, I thought that was your bathroom and I was going to be jealous of that stone!
I will just admire your pie b/c I would inevitably make a mess out of it if I tried to bake it myself.
And on that note, I need to go and rock the casbah :)

George looks adorable, even soaking wet and soapy! Even cuter. Love him!

Enjoy Sweden! Nobody has to remind you to take pictures, and I know everyone who follows your blog (myself included) will be eagerly awaiting said photos! :)

Looking at that pic of your apple pie makes me drool. Must have been something in the air, because my sister baked an apple pie this weekend too. I'll never tell her that yours looks MUCH better than hers! :)

This is a very eclectic and entertaining post. I need another E word. Exciting! There's definitely excitement going on in this.

I love this post! I found you via Miz Booshay at Quiet Life. When I read on my laptop I can't seem to comment, goofy new Windows 8 - but on my kindle it works fine.

My daughter has been to Sweden and loved it. Can't wait to see the photos you will create!

Lastly, your doggy is adorable.

Kate, great post, and good for you for stepping outside the lines. When my daughter was in the military and was stationed in many places, I went to see her in them. Children can get you to be a bit more independent.

You will have a great time in Sweden.

George looks so sweet all wet and skinny.

I just booked a flight to Wisconsin to help celebrate my only brother's 50th birthday at the end of the month.

thewiildmagnola said...
This comment has been removed by a blog administrator.
October 13, 2014 at 11:00 AM

A trip to Sweden. How exciting. A new adventure. That apple is lovely. Too pretty to eat. And wait, there is a place you can go to wash your dog? That's great. Love the pumpkins photos. I love all things pumpkins. Have a lovely week.

someday you will bring one of those pies with you when you visit me … last night i watched the last hour of Sweet Charity .. Ray had gone to sleep, he was exhausted from cold meds .. so ….

I loved the dog bath pic, it made me smile.

Wow. All that AND a new red door. It sounds like you have a new lease on life and a whole lotta fun in store for you in the days ahead.

George doesn't look as impressed with the bathing station as you were. I confess, I've never bathed my dog, in part because she's deathly afraid of water. She doesn't smell though - go figure.

Trying to write anything sensible when I am seduced by that very seductive picture of darling George, and then seeing your apple pie, is difficult. But ten out of ten for booking that flight.

I am so happy for you, Kate! How exciting for you.
As always, George looks so handsome, and that apple pie looks absolutely yummy.

you go girl. i'm so happy for you that you get to take this amazing trip and proud of you for being independent enough to do it!!!

your son has amazing job…at least i think so :)

ps…i don't bake, but i'm going to make this pie!

You are BRAVE! Not everyone can travel to Europe alone... how fun! What an adventure you will have.
Yes, George is famous. I think it is pretty funny that I have a picture of him on my wall in California! It is art! Seriously I love that doggie shower... my dog weighs 110 pounds, we could sure use one of those!

Hi there, greetings from lizpictureperfect.blogspot.com :)
I love your post and really inspired by you always. Good luck to your coming trip to Sweden. And thanks for writing so many good things about yourself. Yes very empowering indeed!

I think that`s wonderful you are traveling more . Sweden WOW ! That should be fun . George you are soo cute and a good boy , Miggs is a stinky dog to and needs a bath that will be this week lol ! Oh that pie looks wonderfully YUMMY ! Thanks for sharing . have a good week !

have fun in Sweden. Yes I am a little bit Jealous. I'll get over it though. An affair to Remember. what a classic.

I would so travel alone!! I made my first trip to Europe last fall with some friends, but if I had the opportunity you have, I would go for it!! Have fun!!!

How exciting to visit Sweden! Looking forward to your photos.