It’s Saturday night and I’m having a swinging time. I worked hard all day and am enjoying a glass of wine and watching Property Brothers on HGTV. Swinging, I tell ya.

Between my son and I, we got the walls done in the new bathroom. Tomorrow we do the trim. Yes, I should have taken before photos but it had been two months since it was used; it had no water and I couldn’t clean it, so it was gross. I did take a movie with my DSLR after the plumbers fixed the leak and while it was all torn apart, so I can use that as a base. And I’ll show you photos of the finished product.

I also got all of the Christmas stuff away, which is a huge relief. I didn’t think I put that much out (and I didn’t) but when it was all gathered together and ready to pack away, it looked like a lot. In between chores, I played with a new app that I downloaded on my work cell phone, which is an iPhone. It’s called Waterlogue and I actually paid a few dollars for it, but it’s so worth it. It takes your cell phone photo and turns it into a painting. There are about a dozen different styles to choose from and it’s just so much fun. 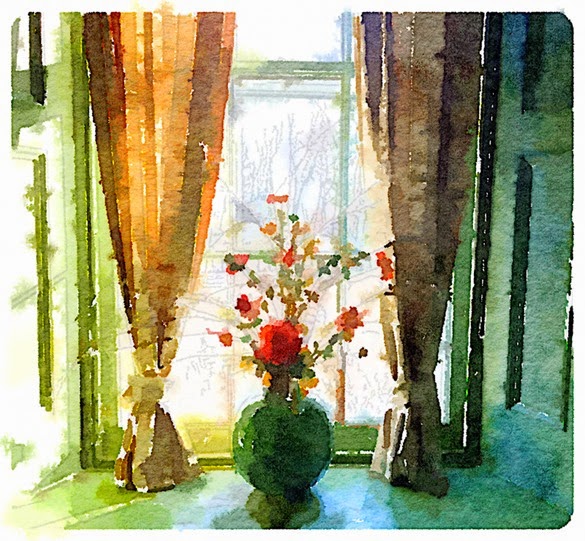 This is probably my favorite. After I got the house back together and cleaned in the living room, I put back my floral arrangement in the front window. The curtain on the left looks like a different color only because the light was coming in on that side. But I think it looks really pretty. 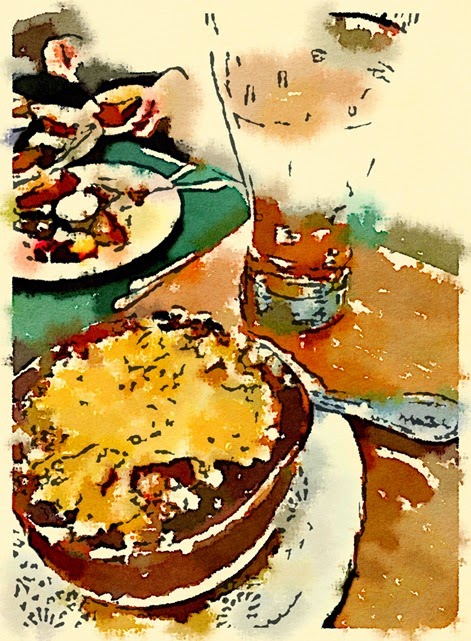 I took this one last night at a restaurant in town. I went with my friend (and boss), Christine and we met up with a bunch of her friends. Scored a seat at the sofa right in front of the fire. And the owner sent over these fabulous appetizers. This is a photo of Christine’s French onion soup and her glass of hard cider. The glass was full so I don’t know why it looks like it isn’t, but still kind of cool. 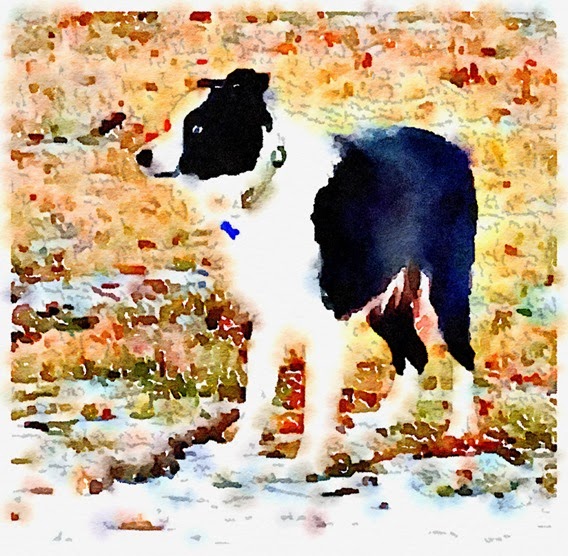 George outside this morning, hopeful for a game of fetch. I was wrapped in a blanket and my winter coat and everything I needed to keep warm. But at 12 degrees, my coffee went cold so I came inside. 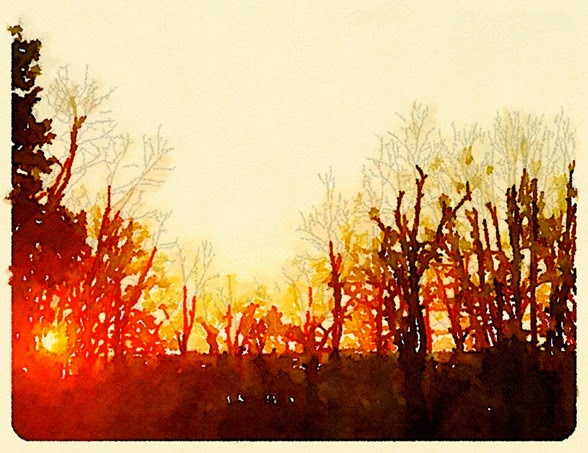 I took a picture of the sun coming up before going in, though. 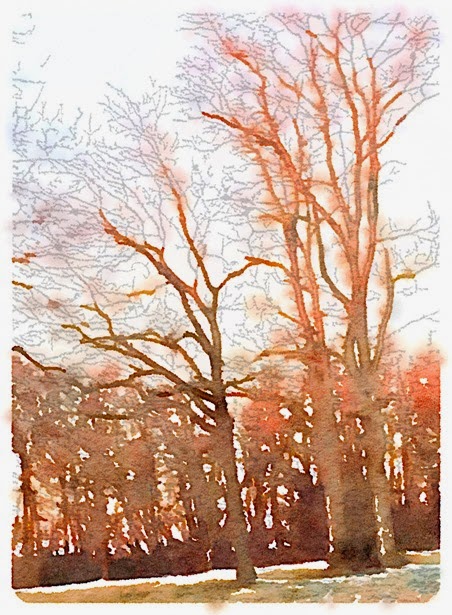 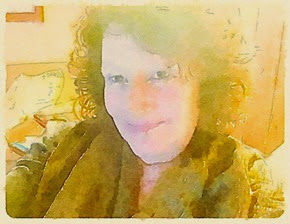 I am not a fan of selfies, and this one is kind of weird. But I’m brave and putting it out there.

Because this app is just too cool.

Last night was fun. We went to a gallery across the street before going to the restaurant/bar to meet her friends. At the bar, one of the couple’s sons was about to go on the stage to perform. He did a fabulous rendition of Bob Dylan’s Don’t Think Twice It’s Alright. And you know what? It all felt right.

Hope your weekend’s are going well. I’ve got a Netflix movie on tap that just arrived in my mailbox today. It’s an oldie so this will be interesting: Alice Doesn’t Live Here Anymore with Ellen Burstyn and Kris Kristofferson and a very young Jodie Foster. Should be interesting . . .

Sorry I haven’t done anything about that Giveaway yet. I promise that it’s still happening though. I just need to find more photos for my etsy site and there are lots to go through ~

Thanks for stopping by.

I love waterlogue....I play with it a lot. Love all of yours!!
And I am so happy that it feels right. That's a great start to a new year.
Hugs, Kate.

I love that app! Will look forward to seeing how you put it to use too. Know what? It really is all right! ~chris

oh I dig those paintings! Who needs an illustrator for future books? [sorry illustrators]

What a dear visit. This was fun. Enjoy your cozy cocoon, Sis

Hi, Kate. Just here doing a bit of catching upon your blog. Love that you painted your door, and also that you have a new bathroom. That must feel like heaven!

I like the program and love Bob Dylan who is still touring. I have the great pleasure of knowing his drummer, George.

Have a wonderful weekend.

That app is incredible.
I too am a Bob Dylan fan. Does that show my age

Just stumbled over your blog yesterday and such an interesting post already where I learned something new. Referring to the app advice. This is a great one! Unfortunately I can't find it for my Samsung phone. But will keep searching for it. Love your photos and looking forward to reading more from you.

There is a setting for Photoshop and lightroom for that I don't have a phone that takes photos lol I always use my camera . I do like the shots though very nice ! I am so glad you had a good day and evening . Thanks for sharing , Have a good Sunday and enjoy your movie !

My waterlogged pictures don't seem to come out nearly as nice as yours...I was disappointed. Is there anything I am doing wrong or should do to improve them?

That does look like a fun process. That first pic is stunning.

"Well it ain't no use to sit and wonder why, Babe!" I always love coming here.

Love what that app does to the pictures! Definitely worth framing! I will check out that Netflix movie although I think I saw it a long time ago! We watched a good on last night called Labor Day with Kate Winslet and Josh Brolin. It was pretty good! You may want to check it out if you haven't seen in already! Have a good week!

Loved all the photos. Cool looking and very pretty.
It always feels so good to get all the Christmas stuff packed away.
Sounds like a fun evening.

Good to hear that the bathroom repairs are coming along. I know you will be so happy to have it finished.

The app is very cool. I finally got all the Christmas stuff put away too. Woohoo!

Do you watch Downton Abbey? I love it.

Your bath will be done before you know it...and psssst, they always look gross, it doesn't take much, remodel or not.

I downloaded Waterlogue via a tip from a blogger about a year ago. It was free then. At Christmas I gave my kids (three of them homeowners) pictures of their homes that I took with my IPhone, then downloaded at Walgreens. Ready in an hour, beautiful 5X7's that I framed. They were so touched It's very addicting. For a long time my profile pic was a waterlogged picture of me... so forgiving! :)

Blood On The Tracks...my favorite!

Don't have an iPhone, but love your app! Very cool photo-paintings!
Glad your son helped withe more mundane bathroom painting, though. Nice!
Hope you have a good week ahead, Kate!
xxTrudy

I love Waterlogue. I took pictures of our house in Ohio last winter inall the deep snow and it looked like I actually knew what I was doing. Oh and the Christmas tree was great as well. Love your pics too!

Waterlogue is my favorite app. I really like how yours turned out. Sounds like you had a perfect evening with friends... Art, food, friends and live entertainment, my idea of perfection!!

fun app .. i have something called MobileMonet but it doesnt make as pretty a water color as those xo

Very cool! I love all the colours, too.

I love waterlogue too!.. yours are awesome! It's addicting don't ya know....

And I have found waterlogue selfies are kind. :-)

Beauty if forever everywhere
I remain happy you share!

Love it! The flowers against the window looks just like a watercolor!

and i love that selfie of you!!!
xo

That App is soooo cool!!! I just downloaded it. Can't wait to see what I can do with it. Love the one of George, and the trees, and the window. Okay I seriously love this App.