At the request of my sisters and several of you who read this blog, I’m posting pictures of the finished bathroom in the manor house where I live. I had said I would, but then recanted after deciding it was way too boring. But the pressure became too great, especially when so many of you said that you couldn’t wait to see the after pics. Ha!

The old bathroom leaked and I wasn’t able to use it since October. Prior to that, we never ever used the bathtub because the former tenants told us it leaked into the dining room. No matter, because we had another bathroom on the other side of the house. So that bathroom became our main shower area. But now I have a fully functioning bathroom. And the hot water finally works. 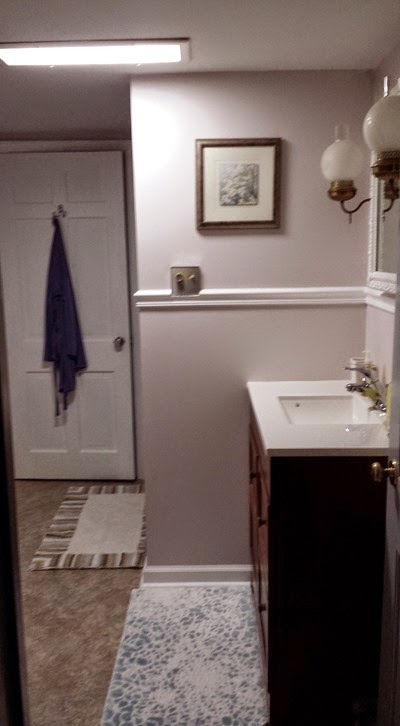 The door you see leads to a very large linen closet (which had to be completely cleaned due to all of the demolition dust that accumulated in there).

Prior to this, everything below the chair rail was green tile. The tub was removed and a large shower stall was installed as well as a new toilet and a vanity. 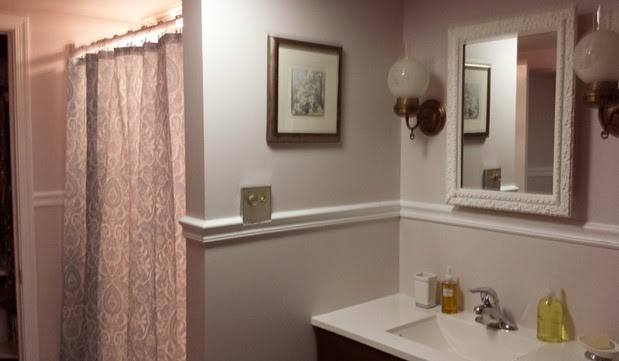 When the plumbers and carpenters were done, my son and I painted it ourselves.

I had thought of replacing that old medicine cabinet (it was gross) but because of Rehab Addict on HGTV, I decided to take it all apart  and clean and paint it. And I love how it turned out. The lamps are old but they kind of go with how the rest of the house looks. And they really didn’t need replacing. 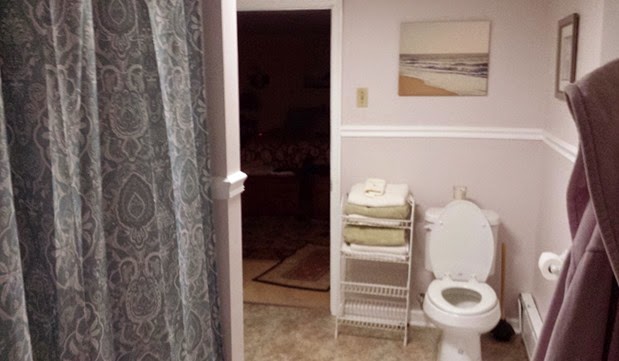 I actually enjoy painting, or rather I used to. I haven’t actually done it in years and had forgotten how tedious it really is. But I think we did a good enough job of it. The woodwork was all a kind of seasick green color and most of it took 3 coats to cover. Seriously tedious and so time-consuming, but also so worth it. 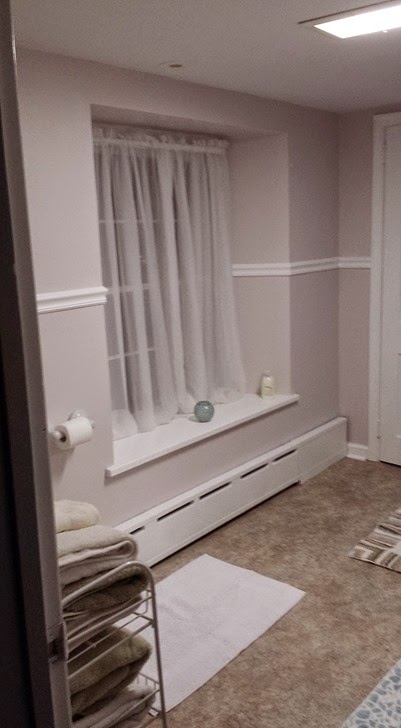 This is a basic bathroom with no fancy frills. And I think it’s great.

The curtains came from a friend who was moving. The wall color is called Ancient Stone, a Behr paint color that I also saw on Rehab Addict. I have always painted with Behr and think it’s quite good.

I didn’t take before photos but I did take a video after the plumbers fixed all the pipe and repaired the drain bed (whatever that is). I watch so many home improvement shows and one of them recommended taking a video after the workers leave. Just in case, you know. If I knew how to make still shots from the video, I would have done that. So for what it’s worth, the before bathroom is in the video below but please excuse the lengthy and boring zooming in on all the plumbing work. The day after I took it, the carpenters showed up and shored up the floor which was in pretty horrible condition as you will see.

Today was the first time I took a shower in this bathroom since I moved here in 2008. I actually accidentally headed into the other bathroom and had to stop myself. I am so happy to have a fully functioning master bath. Yay!

The "new" bath looks great! The paint color is very warm and pretty, and I applaud you on fixing up that medicine cabinet yourself. I like to cut corners that way, too. I'm not good at painting, I thought one small powder room would be okay a few years ago. Nope. Never again!

Good job! We have the exact same radiators.

Good for you! Looks great. So glad you decided to share :)

First CLASS! So glad you you

Love it--the color's great! Hey, I'll take it over ours any day. Painting is SO tedious, isn't it? Glad you had a helper!

It is absolutely lovely - too good to use almost. You can luxuriate now.

Looks wonderful . I am glad it is all done and it all worked out well for you . Thanks for sharing , Have a good day !

It looks wonderful and everything goes together so well! I'm with you on the Behr paint. It's the only kind we use.

WOW! Looks wonderful and I love the color. Gives you a whole new outlook doesn't it! Enjoy and thanks for posting pictures for all of us "Curious Georges." ~chris

Great renovation, and so rewarding to have something redone and beautiful.

OMGoodness, what a GRAND difference. The color you chose is perfect. What a pretty bathroom!

What a gorgeous space! So roomy and that window!! I have to confess, I have always been enthralled by bathrooms and my mom says I would give her my assessment of the bathroom in every house we ever visited, in whispered tones. *grin* This one would get a big thumbs up from me.

The bathroom looks great. It's so nice to update old rooms. Good job.

The new bathroom looks wonderful. Much nicer color than the green!!!
You did a fantastic job.

Love those lights. Yeah, I know they are old but they just look good there. Great job.

I'm pleased you felt pressured into posting about the renovated bathroom. I was curious to know how it turned out too.....

Soon, I hope. Enjoy your new bathroom you lucky one.

Looks great! And ooooh I love that window with the deep sill. I enjoy painting too, it's all the crap before it that's awful! I really like the grey with the crisp white woodwork. Job well done! And how I wish I had taken video when I was remodeling the salon. An inspector needed to see something after it was covered in hardwood and then one of the cabinets was screwed into a plumbing pipe! An emergency plumber had to be called and thankfully I knew where the water main was!

it's beautiful kate!!! i love the medicine cabinet and i think the lights are really cool. knowing me, i'd have to spray paint their bases chrome to match the faucet but i'm so weird that way….ugh.

happy showering in your own bath!!!

It looks terrific! The video really shows what a huge job it was. Love the way it turned out enjoy!

The basic aesthetic is always overlooked when people are redoing bathrooms, or any room in their house, for that matter. No frills and white is a nice minimalist look and a whole lot less work than a French retro style (probably cheaper too). This looks great, and you should be proud of the work you’ve done! Especially after getting that floor fixed, yikes.