It was raining on Sunday and for lack of anything better to do, I went into the attic to move things around, and tidy up a bit. We have one whole room up there where our things are stored and as I moved boxes around and swept the floor, I came across an old trunk.
And when I opened it, I found some old photographs on the very top. Imagine my surprise when I came upon these old and faded pictures of the house. 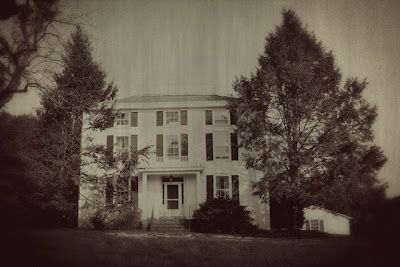 I have no idea when they were taken, probably in the early part of the century, and probably using old wet-plate photographic methods. Wow! 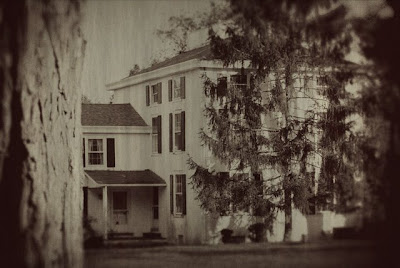 In fact, I'm surprised that the trees look the same size as they do today. And if I look even closer, I can almost see the wires leading out to the DirecTV satellite dish in the yard. So before I go any further, I have to admit that I wasn't in the attic tidying up.
I tend to stay out of the attic. And I didn't find an old trunk filled with treasures. And this old photograph isn't really old.
Please don't be mad at me for having some fun. I'm just having a good time with the Action set I bought at Totally Rad the other day. I had taken this photograph last month and used an Action called Old Skool on it. There are 4 different versions of this particular action in this set and the one I used for these photos is called Super Old Skool. It simulates the look of a vintage photograph, even adding the lens blur at the edges, common to photographs of that era. Then I used an action called Dirt Rag to give it some added texture.
Anyway, it's just fun. It's good, healthy old-fashioned kind of fun! And you all know what an old-fashioned, and extremely refined country woman I am. (Okay, now I AM really pulling your leg!!)
And now on to the matter of the Giveaway: I had signed up on A Giveaway A Day for the first open spot which was scheduled for Sunday, November 30. There have been a lot of entries for this contest and from what I can see, it's still going on. The winner will be announced on the site, probably by Tuesday morning.
Until tomorrow then, my friends . . .

How very cool...you had me going. It really looks like a very old photo...I was a bit disapointed because how fun would it be to be up in an attic on a rainy day rooting through an old trunk....the house by the way looks fabulous....it's big.....

I took the bait!

Great pictures, I thought they were old. Like Sue I am a little disappointed. I wanted to speculate about them. Oh well....
I love your house. Tell a little about it.

Okay, you had me going. I was truly impressed that you up tiding up your attic. I can't even get into my storage room. I was cheering for you and a little jealous. The photos look great.

Well, good. I was a bit disappointed in you at first. Tidying up your attic, indeed!! ;)

I love to play with photos in photoshop. These actions are lovely on this photo!

E-mail on the way to you from me.

I bought it hook line and sinker. Those pictures look great!

Oh, I love vintage photos and how cool is it to find one of your house!! I've always wanted an early pic of the Manor.

Truly, I thought right away it didn't sound quite right that you would be snooping in someone else's trunk! Cool photos and they appear authentically old.....you had me there.

You had me going too. Ha ha ha.

My house is not so historic. It was built in 1928. But when I first moved in, I went downtown to the City Records dept. in my city because someone had told me that our neighborhood was photographically documented in the 1940s. Photographs were taken of each individual house. When I got mine it was interesting to see that my little house looked almost exactly the same except for awnings on the front windows. It looked like the same shrubs were in the front, but taller (!). I'm going to leave the photo in the house for the next person who moves in.

Regarding snooping in attics, I haven't found that much-just really old newspapers (but they are so much fun to look at). I had a friend up the street who found a tin of Peacock condoms when she was redoing the attic and she knew it probably came from the old man who had lived in the house for decades before her. Eeeeugh. Another friend found some false teeth when she redid her attic. :-/

ahh you had me going for a few moments. Meanwhile, I'd love to hear more history about the house you live in.