I get by with a little help from my friends

While having my coffee before work this morning, I read a wonderful e-mail from a woman who visited my blog when I first started writing it and just happened to return recently and she began reading my back posts. She wrote me about her husband, whose situation sounds so similar to that of mine. These are men who were strong, who hiked and biked and built things. They cooked wonderful meals. Her husband built their house. And mine was stallion manager at the biggest thoroughbred breeding center in the state when he got cancer. 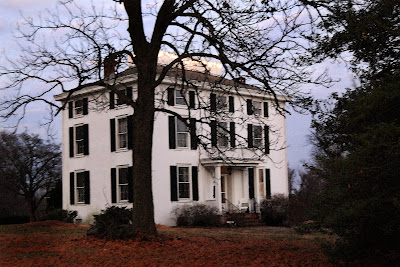 This isn't the first time I've received an e-mail from someone who is in a position where they are caring for their spouse. And it makes me feel so not alone reading them. Writing this blog makes me feel less alone, too, and I'd like to thank you all for your wonderful comments, your support, and for all the funny things you say.


Austin Powers is on in the background and I have finally, finally!!! finished the paperwork for disability for my husband. So I am breaking my rule of no drinking during the week and having one single glass of wine to celebrate.


I'm sure more paperwork will come in the mail for me to fill out, and when I get that done, I'll drink another toast.


My husband had the camera out today, and late this afternoon, he took a picture of the house with the Christmas lights he'd strung on the widows walk. It was pretty blurry because it was getting dark, so I ran a couple of actions on it, sharpened it just a tad and then ran a watercolor filter to make it look a little like a painting. I hope he likes it.


Notice, if you will, that the big hemlocks which were at the front of the house are now gone. A tree company came last week and took them down. They also took one from the back of the house. I think it looks nice. 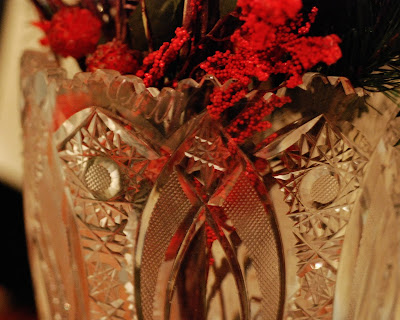 Now about that vase of my mother's . . . Sad to say: I have no idea how our family came to own it. I've sent out an e-mail to my sisters and have heard back from one and she tells me that she has no idea how we acquired the crystal vase. I grew up with this thick glass crystal vase and when we moved my parents from their little home in Florida, it took nearly a week to pack. It was exhausting work because, to put it mildly, my mother was a bit of a collector. She was asking us to take some of her special things but I had come on a flight and couldn't take much back with me. But I did want the vase. She mentioned to me briefly that it had been smuggled out of Poland during the war. 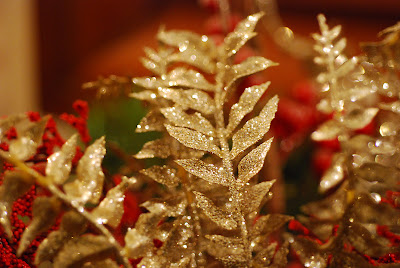 Now busy me, unfortunately, did not stop and ask her anything else about it at the time. I figured we were so overwhelmed with packing and sorting that I'd ask her later. Well, here it is years later and now it's too late. I don't know why Poland because none of us are Polish. So I'm sorry to say that there's no story. I still am waiting to hear from the other two sisters, however, so I'll keep you posted. 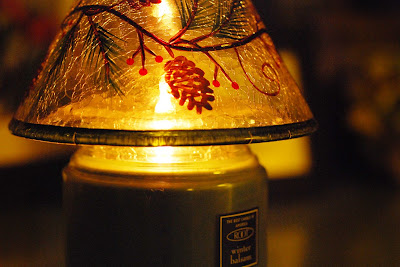 This is just a little candle that I lit tonight because I like candles.


When my husband came out of the hospital after the first brain surgery in 2004, he had an almost unnatural fear of the flames from my candles. So I collected all the ones I had and gave them away to a friend and told him I'd never burn another. He's fine with them now, but is still just a little funny about them. But he says that as long as they're in what he deems a protected area, then it's ok to burn them.
Until tomorrow, my friends . . .

Sharing our stories, our hopes, our pain, it's all a poignant part of life. It makes us stronger. It fortifies us. It also makes us heard and when we're not alone we're just that much more OK.

I'd love to see your husband's shots of the lights.

If you click on the photo of the house, you can see the lights up on the widows walk.

A blog is a good place to get it all out. I wish you'd tell us more about that gorgeous house and how you came to live there and how long you'll be. It's out of a storybook really.

Cheers. Take care of yourself, too.

Just know that you are not in this alone. Hugs and prayers for you and your family.

My mom once said to me the only thing she regrets about her ancestors passing were the questions she forgot to ask. How true for all of us!

Your story is just wonderful, Kate!

My prayers go out to you and your husband. Your house looks so beautiful. Hang in there and take care of yourself too.

So glad you have found support from your readers. Our blog friends are such a blessing. I continue to remmeber you and your husband in my prayers.

I enjoy your husband's pictures as much as yours. He has a wonderful perspective too. And having grown up and gone to school in Chester County PA (not far from DE - used to cross the border to DE to bar hop in college), I enjoy your pictures of the countryside.

Even though you are not certain of the story behind the vase, one thing I do know is that Poland (and I an half Polish) produces beautiful crystal - I have a few pieces.

I am so glad that you are blessed with the support and love of friends. I feel the same way about my blog.

The pictures are beautiful, as usual! Hugs and smooches!

It's so great to hear that you are getting lots of support from bloggers out there who are going through similar patches of life.

Thanks for the pic of the lovely vase. Wonder what the story behind it could actually be? Interesting about the Poland connection.

The world is a small place in retrospect. We, the human race, are connected in ways we don't really understand. Who would have thought that blogging would bring so many people together, touching our lives in many different ways.
I for one love your photography. And thanks for confirming that you are not Polish...I'll still like you anyway!

OHHHH that vase....my great grandmother brought a pitcher out of Poland with that same pattern. She kept buttons in it. Anyway...My Mum has it now. I will get a couple shots of it and we can compare...but I think it's the same.

Hey Kate!!
What a beautiful home...
That vase is also very lovely.
And the shade to the candle, I love things with pine and cones and berries and such on it.
Anywho, I just wanted to stop and say hello. Its Tuesday and there is a long week ahead of us. Lol!
Em

Lovely to read your uplifting story. I too have in the past cared for a husband with cancer. I found that I went into a completely different "mode", almost as though it was all a dream. I too got such comfort from others with the same problem and also from dear friends who gave me such support. My thoughts are with you.

I wonder if your husband's discomfort with the candles has to do with being afraid his reaction time in case of a fire would be less since his surgery ...

And honey, you deserve that glass of wine .. if I were you .. you know what I would have done ... and it wouldnt be a glass of wine

Where would women be without other women to talk to? Lost I think. I love my husband with all my heart but I need my girl friends. They are what keeps me sane. I think in Country Living magazine you can take a photo of something and they will help with the history. They like to see any marks on the items bottom or sides. Good luck.

Hi: I live in the country also and there is nothing like it for peace and solitude. I feel calm just driving in the driveway each day from work and give gratitude for the good fortune to be here. So glad I found your blog. I will check it daily even if you can't write that often.

Lovely photos all around, Kate. So cozy and beautiful. And I want in on some of that 'not a glass of wine' that Daryl's offering! ;)

Reading about the joys, trials and even mundane aspects of other people's lives is what drew me to reading and then eventually writing a blog. I gained a lot of perspective and encouragement, and often a good and needed laugh from the blogs...and your blog was one I read regularly! Thank-you.

Your new home is beautiful, and I just love George.

Now I'm going to have that song in my head all day, but that's OK because I love that song... You are both still in my thoughts and prayers.
xoxo,
Mary

PS -- my mom had a bowl in that same pattern, even with the crinkly edges. So pretty!

Hooray for getting that paperwork done! No small feat, there! ;0)

Should the disability be denied, do NOT lose hope. Keep trying! It is not uncommon to be turned down the first time. A PITA and truly unfair for those who are in need and deserving of the help, but it is what it is. My sister did have to try a second time around and at that point was quickly approved.

I'll pray for a speedy and positive result. :)

I'm behind in my blog reading...Love that candle! It's so pretty. And for the record, I think filling out either insurance or disability paperwork qualifies you for a drinking night. Trust me!