Kitty in a tree (yer doin’ it right)

This is Blackie. She’s the family cat at the moment. I‘m fairly certain that she revels in the fact that she’s the only cat we own at present. And she likes the dog, most of the time. She can hold her own with George without having to use her claws. I like that about her. She is not mean. 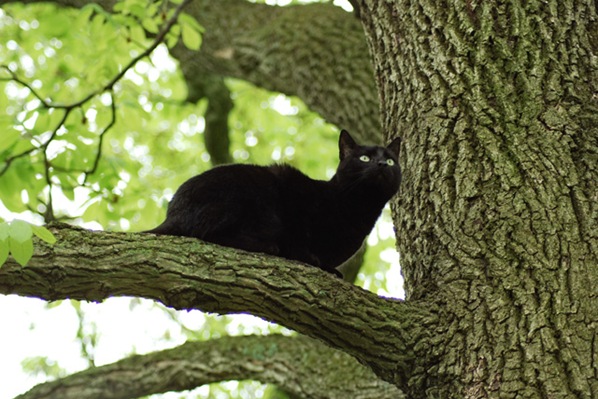 Good thing she’s not vindictive, either. Because this morning, her friend the dog chased her up a tree. It’s ever so much more fun to chase a cat up a tree than it is to chase squirrels. 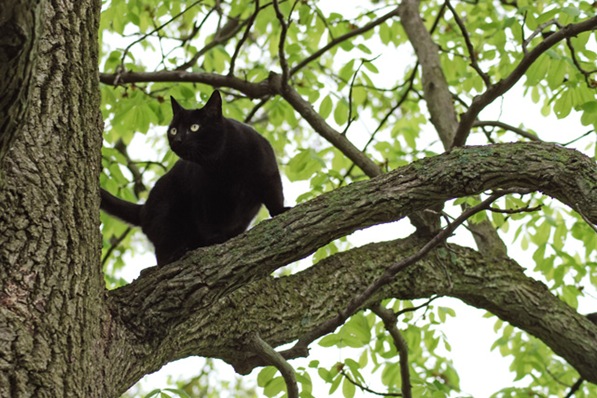 Don’t be fooled at her lame attempt to appear helpless. I think she actually enjoys the view from up here. 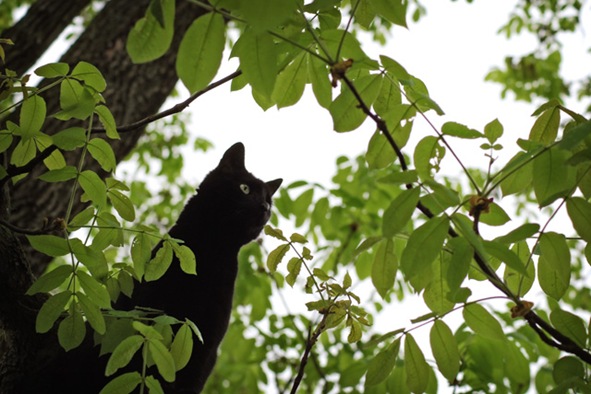 There she is, hiding behind all the leaves. I remember being young and climbing trees. We had a perfect climbing tree in our yard when we lived in New Jersey. I can still remember my mother yelling, “Katy, you get down from that tree!” 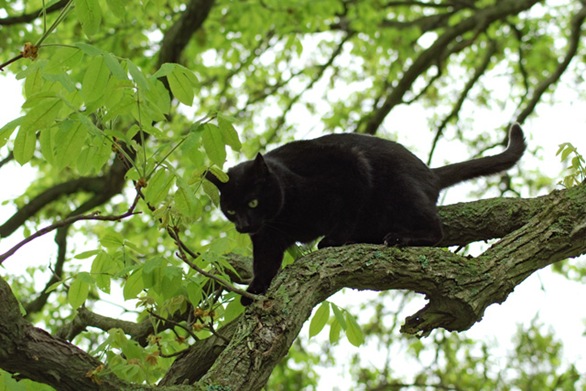 I think she just didn’t understand the sense of freedom it gave me. Especially when you know exactly how to get down.

Today was quiet here at the manor house. Rained this morning, a nice gentle one. I got sort of depressed watching Grey Gardens, the movie starring Drew Barrymore and Jessica Lange. I’d never heard of it before today. It’s the story that led up to the making of the 1975 documentary about Edith Bouvier Beale and her mother, Edith and how they came to live a gothic life in Grey Gardens, a dilapidated 28-room estate in East Hampton, NY. They were an aunt and cousin of Jacqueline Bouvier Kennedy Onassis and became famous when the documentary was released. The original film documentary was ranked No. 2 by the World Film Academy in its 100 Greatest Documentaries in the 20th Century. 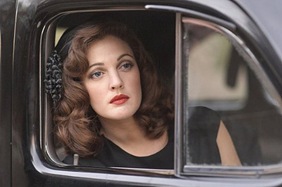 The movie flashed back to beautiful days when the women were young and the estate was magnificent, boasting the most gorgeous gardens in East Hampton. In the end, 25 of the rooms went unused, and were decrepit with vines and trees growing inside. The home was filled with cats, raccoons and opossums and the filmmakers resorted to wearing flea collars around their ankles while making the original documentary. When Jacqueline Onassis came to visit, she offered them help, asking her Aunt Edith why she didn’t just go somewhere else. Edith said that Grey Gardens was the only place where she felt like herself. And I actually understood what she was talking about.

Well, until tomorrow my friends . . .

Interesting, for sure. A sure watch for me. I'll expect the sadness.

What a lovely cat! I think she looks like a "Velvet" or "Nell"! How bout "Black Velvet"? Beautiful photos as usual.

I love your cat and I loved climbing trees as well. wish I was still that agile.

I've never seen the entire original documentary but hope to buy it sometime on DVD. We don't have HBO as one of our movie channels this month so I won't get to see the HBO Drew Barrymore version. Sure want to though. Their lives were so eccentric and sad, but interesting and entertaining.

Grey Gardens was terribly depressing. So depressing, that I chose not to finish watching the movie. I don't need depressing in my life and neither do you. I should have warned you, Kate.
Beautiful cat. You are right, she knows what she's doing. clever little girl!

It's ok, Deb. Odd how it bothered me all day long. I so wanted to CLEAN MY HOUSE but can't even get a rubber glove over this finger.
Hey, I told myself, hey self! It's only ten days. You can do it! I can sweep. I can shower. Life is good.
Cheers, all!
~ C.G.

I just read an article in the Washington Post regarding the Gray Gardens and how the woman who bought the home a restored it to its original state. It was very interesting.

Enjoy having teh excuse of not being able to do anything, the opportunity does not come along very often.

What a cool looking cat! I think his black color especially looked great against the contrast of the trees.
I thought of you today while watching those glorious Thoroughbreds run the Kentucky Derby....
I have never heard of that movie, but Drew looks lovely in that picture!

That cat is beautiful. And I have to watch that movie....

I've never heard of that movie but it sounds interesting- the challenge of finding it in Norway could be a whole other thing- but thank goodness for Amazon.uk!!
The cat is gorgeous- always wanted a black cat- I'm getting close..I have a white cat, a grey cat and two black and white...black cat is on my wish list...hahahaha...and I love the short haired cats...the long are pretty but if you don't groom them (which is almost impossible on a cat) then they look ugly..I can see George enjoys chasing the cat more then the squirrels. Jenny is always trying to round up our cats..they just stop and look at her like she is insane and leave them alone!!!!

Your cat sounds similar to ours, can definitely hold her own with the dogs - in fact they are a bit wary of her!

That's a lovely looking feline. How long did George watch for her to come down after he chased her?

Don't think I'll be watching that one. I go for "happily ever after".
Love your black cat.

I haven't watched it yet...I knew it would be depressing just from the subject matter. But I do want to see it.

Gorgeous pictures of your baby.

Love the photos. The black cat against the texture of the grayish bark and the green leaves.

Haven't seen Grey Gardens yet. I'll keep in mind about it being depressing.

Have a good week.

Fascinating. I'll have to look for the documentary. Thanks for the heads up.

What an adorable little panther in the tree, playing jungle games! Makes me miss my old buddy, Boo, he was half Siamese and had a bad attitude, but Mr. Personality was a gorgeous walking piece of black velvet!

Gray Gardens is one of my "must see" films.

I hope you get well soon!

I always love your photos! Thanks for reminding me of a movie I have wanted to see.
Yes, you can get throught it...but it is a bother isn't it? I could never make it a handicapped kid for very long.

Oh my, I must see this movie...Jessica Lange is one of my very faves and I have never heard of this film. I adore sweet Drew Barrymore too! What a great cast.

Your kitty pics are great...you have such a wonderful eye of capturing the moment. Thank you for sharing.

If you can get the original documentary .. get it .. its fabulous

Oh and those pix of Blackie are superb

There is a terrific post about Grey Gardens over on Joni's blog -- Cote de Texas. I think she posted it a week or two ago... if you are interested in the house and gardens and all their different iterations, go and scroll down till you find it...