Our travels found us along the Beach Boulevard in Biloxi last week, enjoying art work that was carved into damaged trees from Hurricane Katrina. Dozens of beautiful live oaks had died from the saltwater storm surge and in early 2007, the Mississippi Dept. of Transportation began removing the trees from the damaged coastal highway. They also left as much as 20’ of trunk in place on selected ones for artists to carve. 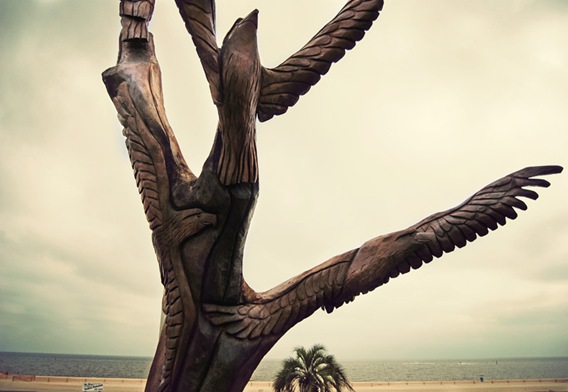 The plan was coordinated by the mayor and the first artistic renderings were created by award-winning “chainsaw artist” Dayton Scoggins of Mississippi. 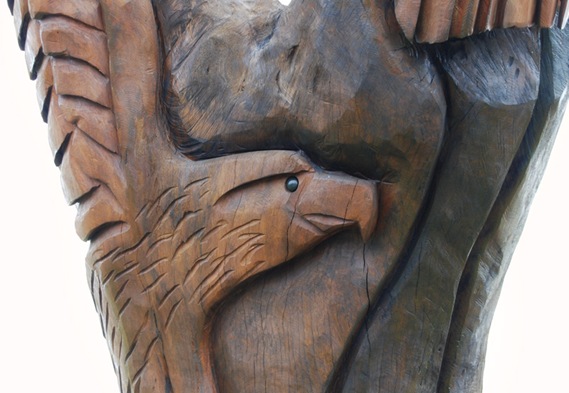 And then Marlin Miller stepped in. Miller, a nationally-known wood sculptor from Florida, was so inspired by Scoggin’s initial work that he approached the city about donating his time and talent to the cause. Miller went on to transform 16 of the 21 trees that line the center medians. To see a cool little step-by-step timeline, visit [this link]. 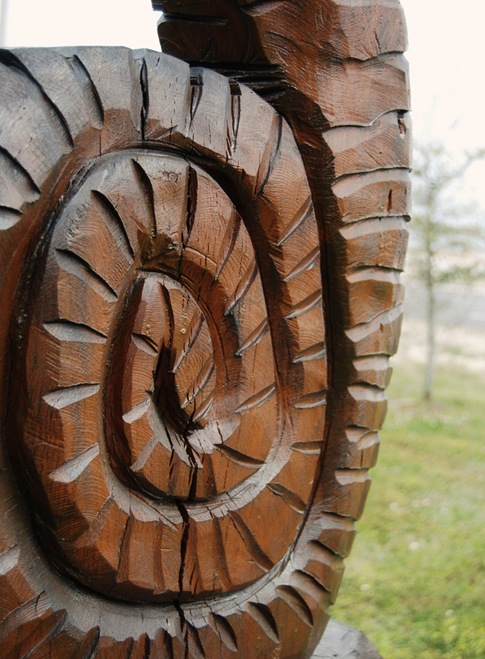 I love this little seahorse. 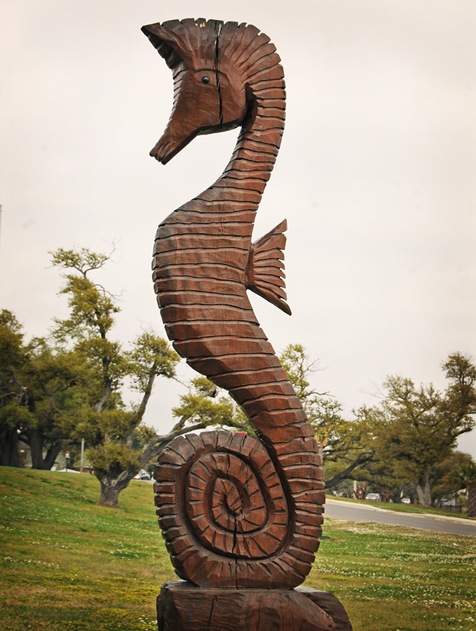 Miller wanted to leave his mark on the city and also to return the favor to Biloxi residents who had helped his Florida community recover after Hurrricane Ivan just a couple years prior. 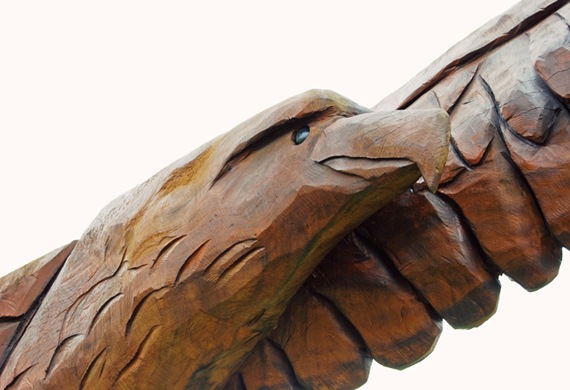 The sculptures have become a top tourist-attraction along the Mississippi coast and are a symbol of the state’s comeback. 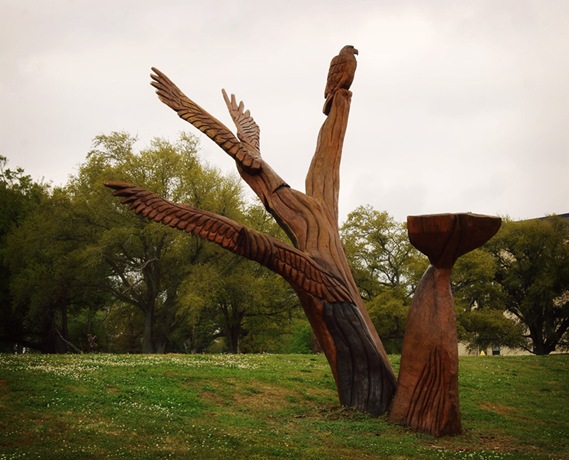 That’s the tail of a whale there on the right. I just love the details. 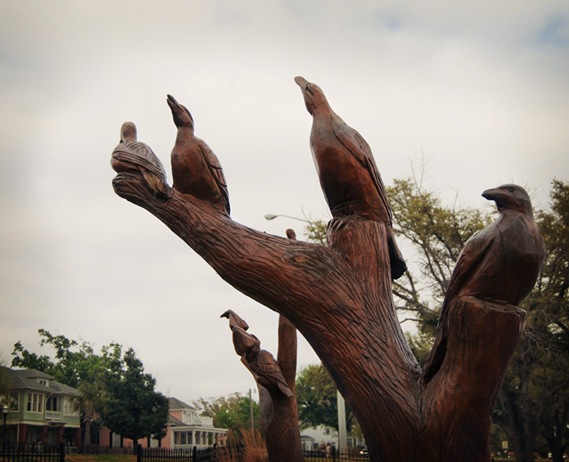 There is also a little iron-gated park where several carvings like the one above stand amidst nicely landscaped grounds. 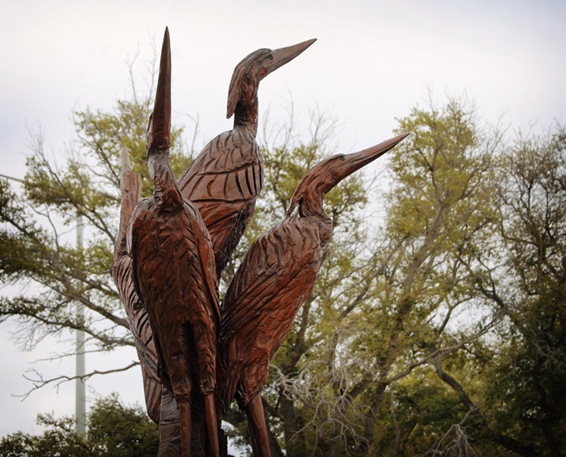 Some of the sculptures tower more than 3-stories high. 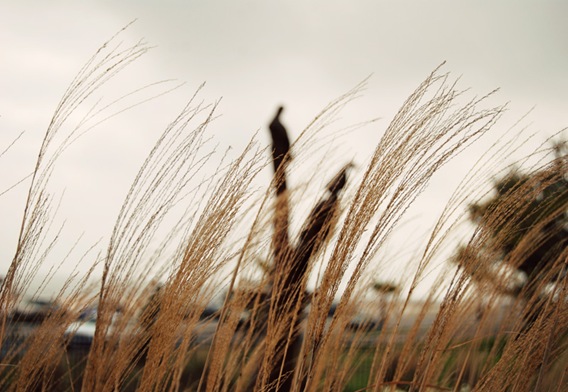 If you’re in the area, rather than staying on Route 10, take a trip further south along the scenic highway (Route 90) and stop for a spell in Biloxi. I think you’ll be glad you did.

Oh, and to make things even better, the Ohr-O’Keefe Museum of Art is being constructed nearby.

You're not far from Gulf Port, where I was stationed during hurricane Gustav. The one picture of the beach reminded me of it, but in yours there no drift wood, seaweed, and trash scattered everywhere!

And I love the last photo.

Great work by caring artists. Thanks for sharing these photos with us.

Beautiful pictures... What a neat idea! I would love to see that one day. :)

Wow, they are so beautiful! We have an artist in my town who does that sort of sculpture. There are three of his works in our town park.

This is amazing, would love to see it in person. Thanks for sharing!

Wow, what an amazing way to take something so tragic and turn it in to something so beautiful! Truly wonderful!

The story and images are beautiful. I want that seahorse!

Oh my gosh that is so cool!! What a great idea!Thanks for sharing with us!

Thanks, Kate, for showcasing my home state :) I live about an hour from Biloxi...we were affected by Katrina and had to evacuate. I will never forget the first images of Biloxi after the storm, nor the frightening experience of not being able to get food and water and other necessities for my family...and we were the fortunate ones.

How amazing that such beautiful artwork can be created with a chainsaw! Thanks for sharing these pictures with us as I never realized anything like this was ever done in the Biloxi area.

wow! What a great idea. These are the kind of things I like to see when I travel. Unusual things, especially when they are associated with making something good out of something bad.

That is so amazing it made me cry. Something so beautiful from such disaster and for someone to volunteer their time and talent...
Just amazing. Thank you for showing us.

These are so beautiful. I wonder why we have not seen these in the news? We were stationed at Eglin and my brother-in-law was stationed at Keesler when Camille hit in 1969. The people of the MS Gulf Coast are to be admired for their positive responses to such devastation as they have endured!

Per your email. No we haven't seen these. We've only been to the coast once since Katrina and we didn't go to the Biloxi Beach.

I knew that the oaks were killed, but really didn't know they had done this project.

We were without power for 13 1/2 days after Katrina and we live 30 miles from Jackson in the middle of the State.

Katrina greatly affected many of us. Not just physically but economically. My husband is self employed and it affected his income due to loss of work.

what a creative way to deal with the aftermath of destruction ...

What a fabulous find .. and I am glad you got the links working between the two blogs!

Something good always comes from devastation. I hope I can see these in person someday.

I can't wait till all we blisters are rennited this July!

A wonderful example of waste not, want not...

I'm surprized that I have never heard of these beautiful sculptures before....if I ever make it down there I would definitely try to see them...great photos Kate!