Taking a walk around the inner loop

I’ve made mention before that my husband (and I, to some extent) have walked so much around the perimeter of the property on which we live that it looks like a trail has been carved. Check out the 3rd photo in [this post] to see what I mean.

Since we moved here in October 2008, he has walked nearly every single day. He walks in the snow, in the rain, in the fog, and in the cold. He has walked and George has followed.

Or George had a bit of a lie down and waited for him. 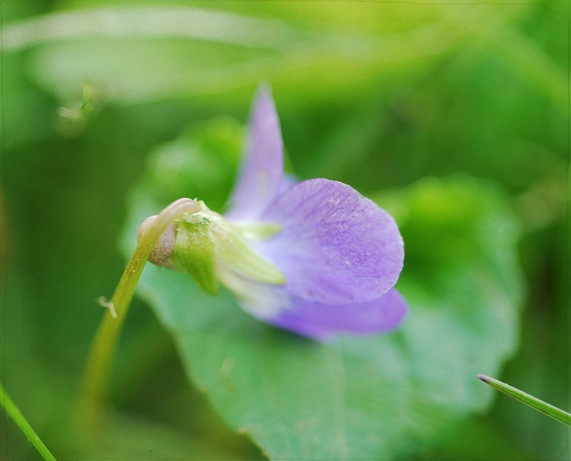 Last fall, I began to notice that the original trail had some branching off at certain points. And at times, I’d see him off what he called ‘the outer loop’ and walking through the property or down the fence rail.

Today I took the hiking poles, called for George and out we went along the regular route I follow, counting the number of times I go around. Or stopping when my foot hurts so much I can’t do it anymore. 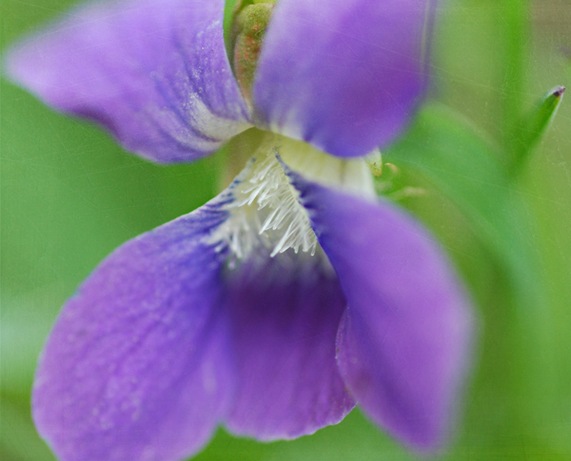 I noticed that he was out picking up branches and was surprised when he showed up at one of the little intersections of the outer loop. And well, here’s the conversation.

HIM: Why don’t you try the inner loop today?

ME: I didn’t know it was an actual loop.

HIM: Try it. it will be different. It starts right here. 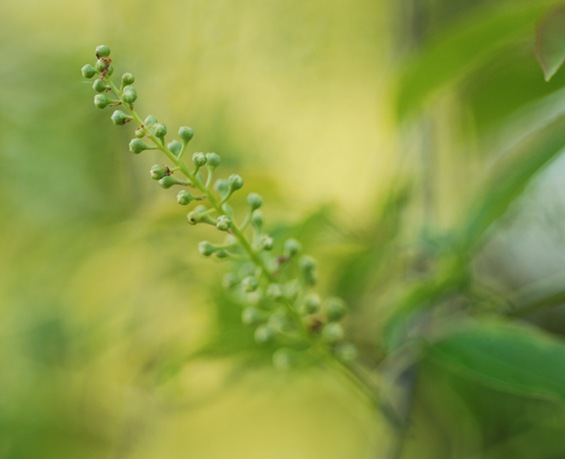 And the tour guide was right. It was different, taking me right past the front of the property with different views. It just added something a little different.

And when I got home, I took the photos you see on this post, using the macro lens. 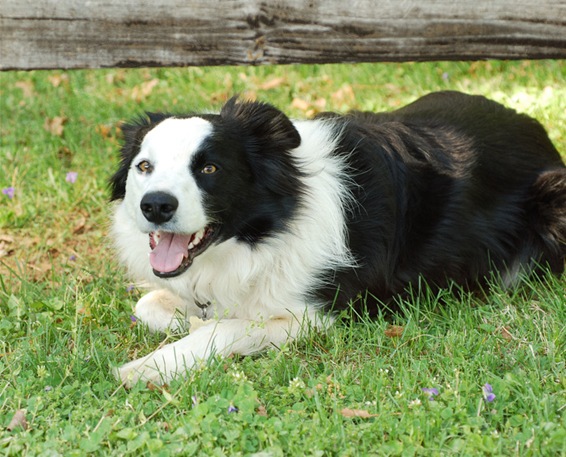 Oh, hello pup. You look handsome today. He looks like he’s saying thanks, doesn’t he?

All photos taken with a Nikon D80 and the Nikkor AF Micro 60 mm Macro lens.

It may sound boring. But believe me, boring is fine with me right now.

It is so much greener where you live then in Oklahoma... We are still mostly brown. I'm so ready for some cheery green.

Oh, you have reminded me of my grandmother's walks around 'the property'...she eventually wore a spot in the grass along the lot and fence lines. I wish now I had a photo of her walking on that path in her shirtdress and loafers.

I like that inner loop and outer loop better than 695 for sure. Thanks for sharing.

I would love to have such beautiful grounds to walk around and explore. I bet you find the most interesting things each time. It shows in your photos.
Thank you for your kind words on my blog. They definitely lift me up.

We have trails in the woods on my grandparent's property where we have walked for so many years! Taking the path less traveled is always a nice change of pace!

It sounds lovely to have property with trails. Gorgeous photos.

Unfortunately, I'm with George. I might have to stop and wait. Sure would enjoy it though.

It doesn't sound boring at all, it's sounds peaceful and relaxing.

We have trails similar to yours but they are made by the sheep. They follow single file, one by one on the same trail through the same field, to and fro everyday. Predictable but fun to watch them.

Hope your foot gets better soon ~

I, too, took some pictures of violets today. They are one of my very favorite flowers. They bloom so briefly and make such a lovely ground cover. Mine won't be up for another day or two...I tend to post several days in advance so they will be up probably on either Sunday or Monday.

I like to walk my property, it is considerably smaller than yours, but things change each day this time of year and I can plan where to put new plants or where to put plants that have to be moved.

I'm with you...boring is just fine with me as well. How else would we let our souls rest from all the chaos of the world "on the outside."
I love all the white in George's colors...we had two Border Collie's growing up but they had more black than white...George looks so striking :)

I think it's wonderful that he showed you a new way to look at your usual walk. Really, that's what life is about, isn't it? Seeing things with a new eye or with greater wisdom, and knowing there is an incredible amount of beauty in our day to day lives, we just have to see it. Sometimes we have to step off the beaten path (sometimes we're violently shoved off our normal path) or take a new one to fully see it though.

It sounds like (and looks like) you live on such a beautiful, peaceful property. Beautiful photos and a handsome George as usual :)

Love the results you get with your macro lens, Kate. It's on my list of must haves very very soon!

We enjoy a bit of boring too, at least my feet do.

That is like me...when I walk around this island, even if I'm going to walk the same path, I need to walk it backwards or something because it gives a different view or angle of what I've already seen...I get terribly bored if I walk the same path over and over...so I walk one way one day and the opposite the next and then I can go back to the original route..I just need change...and in nature there is always something new to see if you're looking..
Enjoy your walks Kate and here is an idea...any way to make your own loop you could share with your husband? Or perhaps you should walk the loops starting in the opposite direction...variation is the spice of life?? ;-) Weekend greetings from Norway :-)

Boring? oh my, heavens no, CG...I'm of the mind that walking is one of the better pastimes on this planet. And with your someone-so-special to suggest new *loops* and a stunning furry comrade to get looped with, well now, there's not much better than that.

Just for one minute there I thought there was going to be a competition around a 'What is George saying?' photo.

The photos from your travels were lovely - especially the carved trees along the coast.
Ms Soup

I love boring too! What great shots and it is so nice to have the time to walk and relax.

I wish we had enough acreage to walk around. love your violets! :) it's always nice to see familiar surroundings from a different perspective.

have a wonderful weekend, kate!

I never get bored of being outdooors. Love all these photos, and your description. George, he is so handsome!

wow....now i wish we were at our cottage more often so i could wear a path around where i walk....

my sister just got a new dog...part lab, part irish setter and part border collie....and wow, is that dog smart !...she is sure the intelligence comes from the border collie genes.....i think she's right !

What beautiful pictures! You must have loved this trail to walk!
So nice to meet you today.
Yvonne

Its so not boring ... and I think George is saying 'wasnt that fun?'

WV menprock .. I've heard of Prufrock but menprock not so much, I believe T.S. didnt know menprock .. or maybe he did

Wish I could have been on the walk too...wait...I kind of was. Thank you for a beautiful day.

As long as you stay in the loop, it's all that matters!

It isn't what you look at, it's how you see it.
My sister said that to me a few days ago...there is a poster in her office building with that on it. Will ask who said it.