Yesterday, I got to choose the hike we took and after reading the indispensible guidebook on Acadia National Park that we bought a few years ago, I chose this one. It’s the Beachcroft Trail that leads to the top of Champlain Mountain and it begins at the parking lot on Rte. 3 by The Tarn just south of Bar Harbor. The trails in the park are rated from very easy to strenuous. Click {here} for a guide, if you so desire.

This one was rated strenuous. But I am an eternal optimist.

I chose this trail because it affords the same view as you would get if you were hiking the Precipice Trail, the most challenging trail in the park and only for the very fit who have no fear of heights. The Precipice Trail is an exposed, almost vertical ascent of 1,000 feet. It’s worse (to me, anyway) than the dreaded Beehive. My guidebook stated that, in comparison, the Beachcroft was a walk in the park. 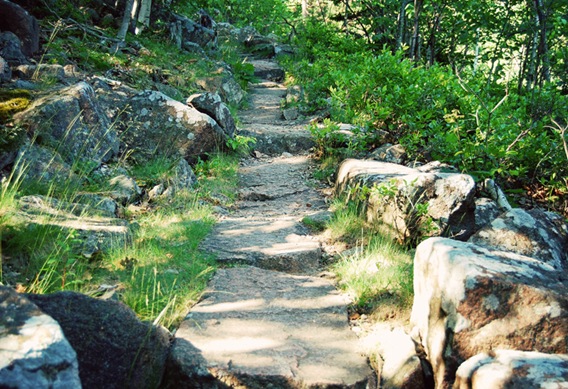 The trail begins as a gentle climb on stone slab steps. 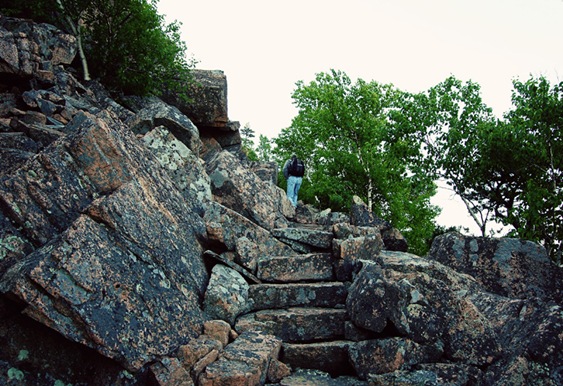 If you have a fear of heights, this trail probably is not for you as some of it is open. 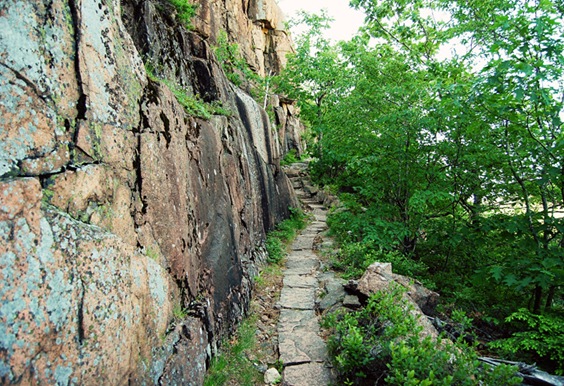 It was the perfect day for a hike, just a tad bit chilly with beautiful blue skies. And I was totally loving this trail. 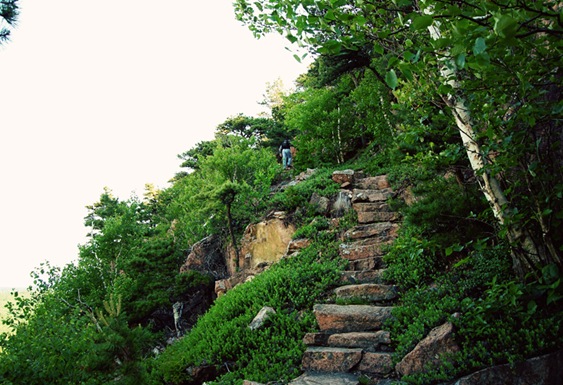 There is a multitude of exquisite stone steps that lead up the western side of the mountain and I marveled at the amount of work that had been put into creating not only this, but every trail in this park. 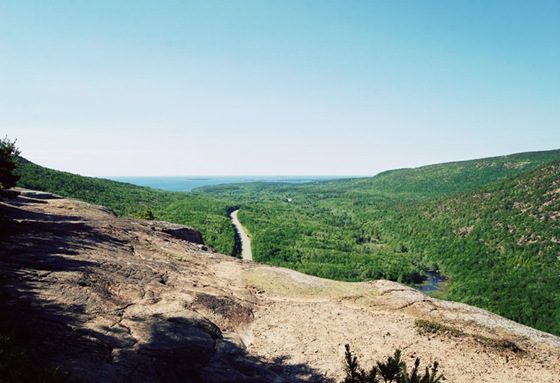 There were lots of wide-open views and little rest stops along the way. That’s Rte. 3 you can see there, heading south towards Seal Harbor. 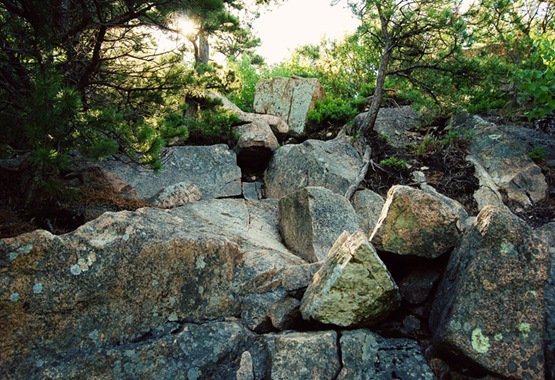 Then it got a little dicey. This was the first section of really rugged terrain. Not good if you have knees like mine but I did it anyway because hey (I’m in Maine). And if you’re worried about George climbing over this ~ he was amazing. He just scampered up. As did my husband. Damnit.

At one point, I was breathing heavy, my fingers holding for dear life in the crevice of a rock only to look up and see an elderly woman gently coming down. She could see I was having just a little trouble but assured me that this was the steepest part of the trail and not to worry, I was almost there.

I was later to find out, through another couple we met a the top who had spoken with her, that she’d lived on the island all of her life and had hiked every single trail in the park except this one, which she decided to do that morning. Interesting. After the harrowing climb up the boulders, there was a section of this where we followed the cairns (the piles of stones used as markers to lead the way). It was a little steep but better than those boulders. 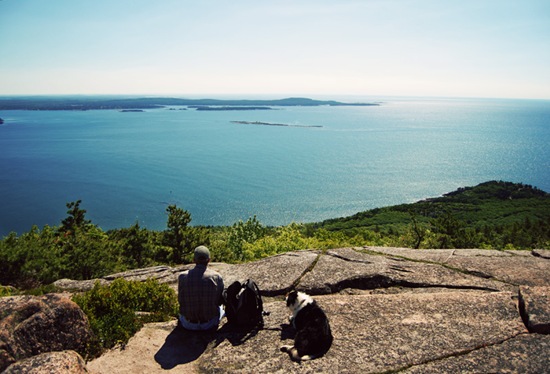 And at the top was our reward ~ a spectacular view. That’s the Schoodic Peninsula in front of us. We stayed at the top for a nice long time, laying on the rocks in the sunshine. George took a little siesta, too.

The hike down was surprisingly easy, although I ripped my hiking pants sliding down some rocks. A trip to Bar Harbor to pick up some sandwiches came next and we drove to a scenic location to eat our picnic lunch.

All in all, the Beachcroft is a great trail. Today we’re taking it easy. Took a small hike over on the Schoodic Peninsula, a much lesser-used portion of Acadia National Park. We hiked both the Schoodic Head Trail and the Anvil Trail and then came home and went kayaking.

Wow, wow, wow!!! Beautiful, Kate! It looks like you had a great day for your hike. We did not do that trail either of our years there, but if we get back, it is on my 'to do' list!
We actually hiked on Schoodic Peninsula while there, too.
I am so happy you are having a good time!!!

WOW! Very proud, very proud! I can just about smell that fresh air!

This vacay is exhausting me....

Ok, does the fact that just reading your post made my hands sweaty mean that I'm afraid of heights...ummm yes, yes it does!

Do they have baby trails that will take you to that same view? Think bunny slope at a ski resort, that would be my speed I think! I would be fine once I was at the top, it's the getting there that's the hard part for me!

i felt those shots, Kate!

What a great hike, beautifully laid out and what a view from the top! :D

Fabulous pictures & a spectacular view! You are making so many of us VERY jealous right now!!! ;)

How are the new shoes treating you?

Looks like a great hike! Acadia National Parks is definitely on my Bucket List! Hopefully my wife and I will get there in 2011.

This place just looks gorgeous! I've never been to the northeast, but seeing these pics has got me thinking I need to go, and soon! My husband and I love to hike, although that ones does look a bit challenging. Thanks for sharing these.

So how are those new hiking shoes/boots that you got a while back holding up?

I can see already that this is a hike I would not be able to do.. darn. So pretty at the top as well as the trail along the way.

It is gorgeous, and I am so glad you are enjoying yourself.

I want to do lots of hiking while I'm there, I just hope I can manage some of them. Your posts make me even more excited to be going next month! I sent the link to my fiancé, Matt, so he can check it out too.

You are braver than I for hiking that trail! I never would have finished it. Hope you got some nice pictures of Schoodic. I took my grandparents on their annual trip down there last year as my grandfather no longer drives. He was stationed at the naval base in Winter Harbor that used to be there in the 50's so it has personal meaning to me. I am loving the pictures you have been posting!

Lovin this vaca.. thanks for taking us along :-)

Dang! Now I really want to go back. The beauty of Maine is unbelievable! Those heaps of granite and the view and the sea and the food...

I hope in the next life there is a way to visit all the places we miss in this one. My list is SO LONG! Thanks for sharing your trip and George.

I think I would have taken the elevator...

Oh how wonderful! Love seeing George out there too. Great pics Kate! Enjoy the outdoors ;)

Good for you Kate! Your vacation sounds wonderful - I'm so glad you are all enjoying Maine and Arcadia. I've not hiked any of those trails but hope to at some point.

Enjoy the rest of your stay :)

Beautiful shots. I so hope I get to go there someday.

Wow, what a hike! I really enjoyed the views thru your pictures! I'm so happy you are enjoying every moment!

I'm thinkin' that lady was an angel sent just for you.....smiles. (and by the way, I am with Mental P Mama, you are killin me! )

You rock! No pun intended. It's beautiful! I bet George had some good snacks in that back pack too! I liked the story about the elderly women. Wonder what her story is? Take care Kate!

Ah, Kate. That sounds just terrific! Love that you n all are loving your week in Maine. Good on you for getting out there and hiking! Putting me to shame. At least I am with family at the moment. So that is fun. Maybe we might get to go hiking too!

A day surrounded by beauty and those you love...perfect.

completely gorgeous!! so glad you got such a beautiful reward

Well worth the effort I would say! Thanks for taking us along, and doing all the hard work!

That is just beautiful! It is now on my bucket list, but I really must hurry because as I age I find unsecured trails and heights really do scare me BIG TIME!

What memories you three are making!

To tell you the truth, I'm getting a little bit nervous about hiking in Acadia this summer because I'm in such worse shape than I have ever been...

I so enjoyed this walk/hike. George was an absolute trooper and excellent companion (as were you and your hubby). The view is glorious, and the rest so well deserved. I still love coming along and not wearing myself out or breaking a sweat. An almost perfect vacation!

Wow, thanks for taking us on that hike with you- looked like a great day! Now I know if you ever get to Norway what kind of trails I can take you on ;-) hahaha....good to hear it's not just me who huffs and puffs her way to the top- but good for us! Better to huff and puff and get the chance to experience those kinds of views then to sit down below and wonder what all the fuss is about...Stig is also a billy goat when it comes to climbing and I often tell people I have such big dogs so they can pull me up the mountains...hahahaha....

Yes, there is a 'bunny slope hike' that will take you to a beautiful view such as this.
You can easily drive up Cadillac Mountain, park your vehicle and take the little hike at the top.
And no sweaty palms . . .

What a great trip....I think this location is going to be on my list of things to do with the family before JBM gets too old to want to hang out with Mom and Dad.

Beautiful, but not for me. Extremely terrified of heights.

The stone steps are really neat! I wouldn't have expected them on a hike. And with the heights, I'm afraid I wouldn't do to well. Once I get to the top I'm fine, I just don't want to look down while I'm going up, or down.

Think bunny slope at a ski resort, that would be my speed I think!
Contextual Ad Network India