As twilight drops her curtain down

Winners are announced in the post below for the Giveaway.

It was almost dark when I took these photos today. I was finished walking and it was so hard to see along the trail that runs around the edge of the property so I quit early and went in to get the camera. 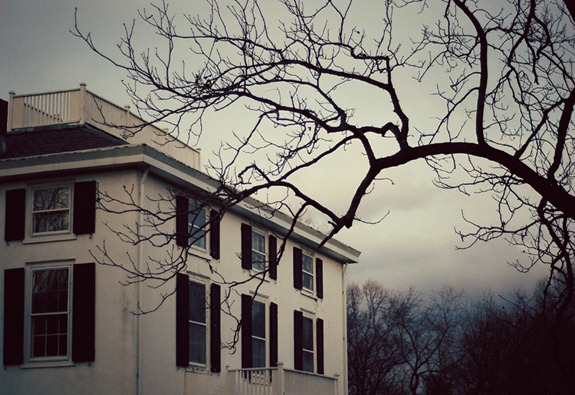 It still had the 50mm lens on it from using it at school today. That lens lets in a lot of light, so I decided to leave it on and hurried out the door.

I ended up turning the ISO up to 1600 to get these shots. 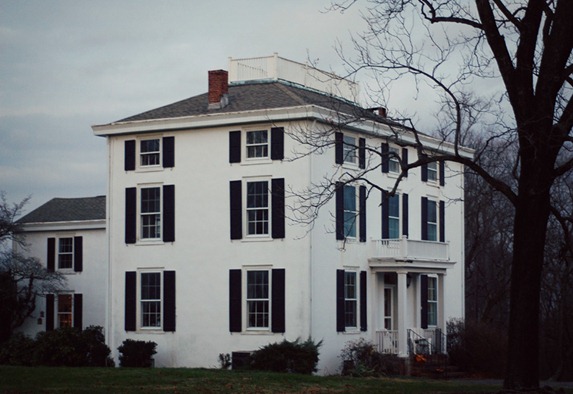 I mean, it was full on dusk and difficult to see out there. Today was wicked in the weather department and it did just what the weatherman told us it would do. We had a lot of rain and wind and by the afternoon it was downright cold. 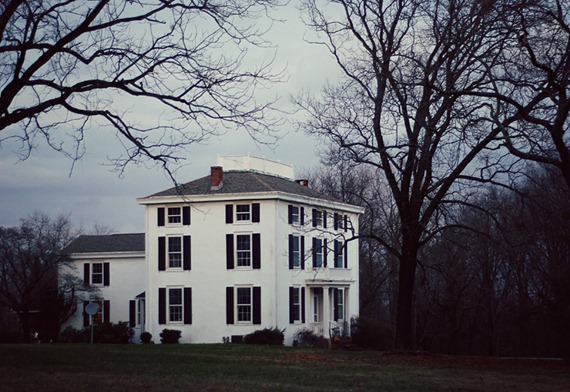 The 50mm is a fixed lens, so to compose your shot, you have to physically place yourself in the right spot.

For those new to this blog, this is where my husband and I live. We don’t own it, though. We’re the caretakers of this old manor house on the hill. The original house (on the left) was built in 1769 and the big section was added on in 1810. 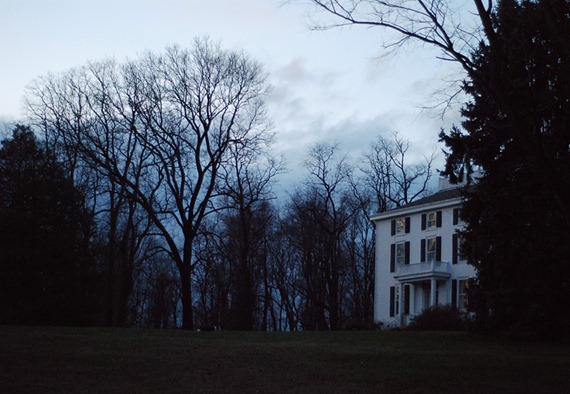 It got too dark to shoot anything and besides, I was tired from my day. Can you see George running on the lawn?

Thanks to everyone for entering my latest Giveaway. I’ll try to have another one during the holiday season. Check out my free desktop download on the post below, too.

beautiful. lots of rain here, some flooding, even, that then turned into a snowstorm. winter.

Amazing it would pull in enough light to capture an almost "foggy day" feeling. :)

light or no light....these are beautiful !

Love how atmospheric these shots are ... right out of a gothic romance! ;-)

Lovely shots.. amazing smooth for such a high ISO.

Very nice for a high ISO. And the house looks so stark and bold against the bare, dark trees... especially in the third photo.

Ahh, CG, I could f.e.e.l. that weather in your amped up 1600 and I am in LUV with that last photo...but George? where? is he that tiny white speck near the base of the tall(est) tree? But heh, pleaze don't ever tell George that I called him a tiny white speck. Good lawdie. I would be in certain trouble then.

Those shots are beautiful. I can never get good shots like that with a high ISO. The last one is my absolute favorite. What a beautiful house to come home to!

Trees are beautiful in all forms and seasons, aren't they?

I do love this house, it just shouts history.

Such beautiful shots! You gotta love the nifty fifty. And wasn't that weather something else?! Thank God it was in the 60's or we would have had a TON of snow... !

you have a beautiful place to take care of...nice photos...

Nice shots, I take it your F stop was at 5 to 5.6 . I was out yesturday photographing the first snow fall we had, I have them on my Photography blog, still learning camera but am understanding it all now. We are in a photography club now and we all are learning from eachother its great, hubby is way more advanced so I learn from him. Have a great day !

This home is gorgeous - I would love to live in it and the 50 mm is an excellent choice. I've got to scroll down now and see who won!

I have to use a point and shoot, cause I can't remember what all those settings are.

Oh the stories your home could tell...beautiful shots!

Love the shots of the house. I can't believe how old it is. Are there ghosts?

Take care of you! easy to forget this time of year....smiles.

The weather was crazy yesterday wasn't it?! And today is downright nippy. I love how this lens is able to capture so much in so little light, beautiful! I can see George int he last photo!

I just love the feel of that place, it has so much atmosphere! And of course you capture that so well. I saw George in the 3rd picture too! xo ~Lili

I wanna see that house up close and in person. It looks gorgeous!

Your photo's are beautiful! You've really captured the weather and time of day. Great job!

Your house looks so haunted! Beautiful, but definitely haunted!

Your photos are very beautiful!! Love those cloudy nights:)

Not haunted, Deb. Definitely no feeling like that here!

I really hate how early it gets dark...but you captured the colors of dusk beautifully. I just got a 50mm lens as an early birthday present and I have to say that my pics have not come out as good as that:)