It snowed a little today.

We had less than an inch, but because it was the first snow of the season and because the ground was already completely frozen, it actually caused a lot of commotion in my neck of the woods.

There were scads of traffic accidents during the afternoon. Parents were running into school to pick up their children early. The office phone began ringing at the first sight of the snow and didn’t let up all afternoon. 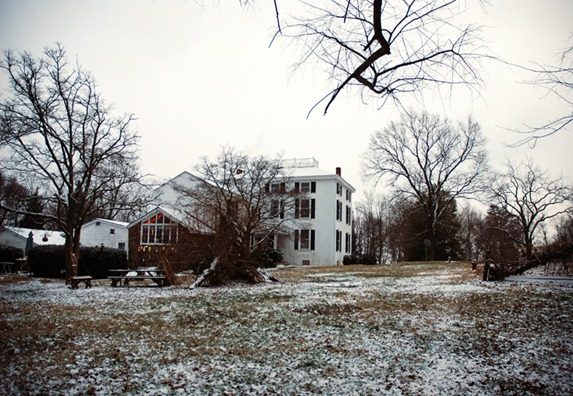 I took my time coming home but didn’t encounter any of the trouble I’d heard about. I was glad there was still some light, so I headed outside with the camera. 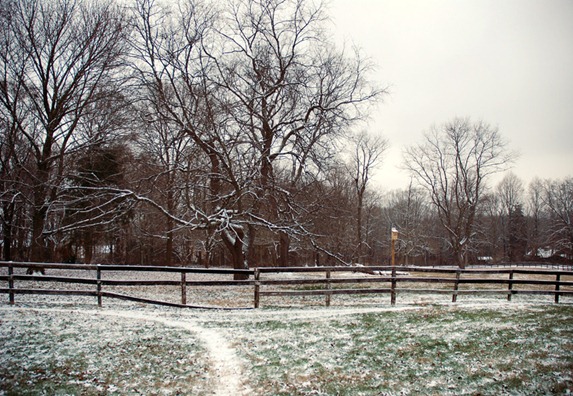 The first snow is always exciting to me.

Even though it didn’t snow all that much, it still makes me smile. 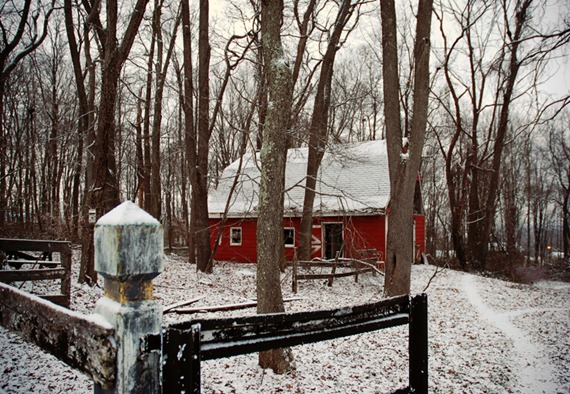 I love how pretty the old barn looks in the snow. 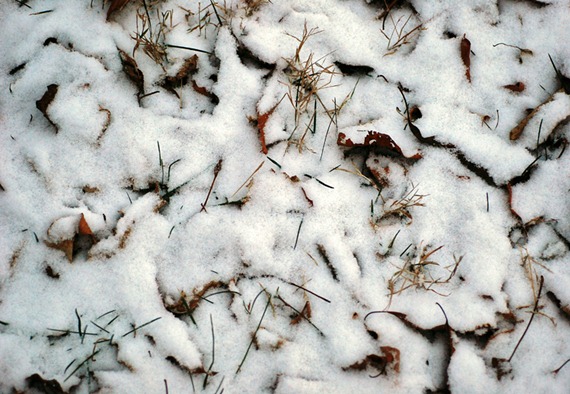 It barely covered the leaves on the ground. And it was so cold that I came inside early because my fingers were freezing from having them out as much as I did. 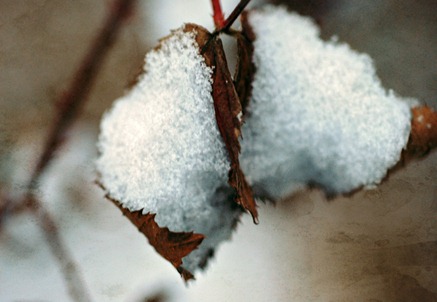 Thanks to everyone for your comments the other day. I love that little video but haven’t been able to find anything that touches my heart like that one does.

Maybe a goal for the coming year would be to learn how to make videos. And not just the You Tube ones I have that are my photographs set to music. A real video. I could have George as the star.
And my husband’s back. 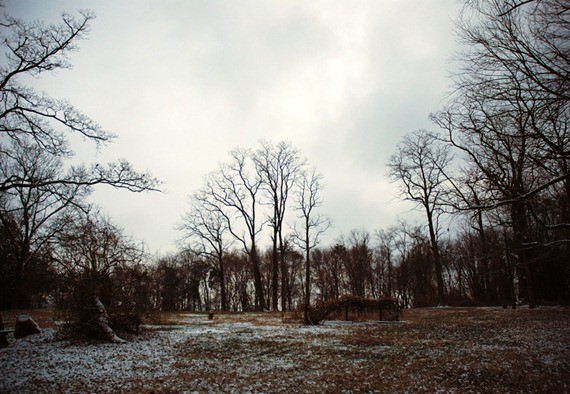 One more day of school. One more! And then it’s two weeks off. I’d better get moving. I’ve got presents to wrap for tomorrow.

I especially love the red barn against the wintery backdrop. Have fun wrapping presents!

That's about as much as we have.. but it looks so much prettier there. Lovely photos, Kate.

Beautiful photos. We had slightly more snow, but not as much as I'd hoped.

Oh, to have two weeks off. Enjoy.

Oh the snow makes me homesick for Colorado. Not too much snow here in Az. We did get some nice rain today, but it's snow that makes it feel like Christmas.:)

Hi Kate, just seen your comment on my blog. No, I do not have e-mail enabled--thought maybe some weirdos might spam me...maybe I should go ahead and enable. Your photos inspired me to play a little on Photo Shop... oh gee, I need several lifetimes to learn how to use that thing. I do really like your videos with your photos set to music. Your photos are wonderful! So is your blog, by the way. Have a great 2 weeks off for Christmas/New Years!

We didn't get the snow today, it was coming from the south. We got a great snow on Thanksgiving and some earlier this week. Enough for me. :) Isn't it amazing how such a wee bit of snow can cause such havoc!? Be safe in the morning! Oh, and I have to agree with you, the barn looks great covered in snow.

Snow just has a way of making the whole world look beautiful, doesn't it?

Beautiful red barn in the snow! Glad you had a chance to get out and see some daylight (even if it had to be because of inclement weather!) :)

beautiful pics ...videos are what i love about my camera... it makes them so simple and i can take long ones short ones sideways ones and it is all at the push of one button :)
woudl love to see george in action and of course the hubbsters back :)

I had no idea you had a barn on the property, love the old red color..and in the first picture, I also had no idea the house was so sprawling, for lack of a better word.

That song (heard in a Charlie Brown Christmas - my favorite)... is my favorite for this time of year.

Nice pics. I like the old barn shot too.

I'm with Karen, I don't think we've ever seen your barn before ... or that side view of the house with the additions and outbuildings like that. We're a bit south of you, and we have about 2-3 inches of snow on the ground. Luckily, with the cold ground, none of the initial snow melted and the backyard steps were easy to keep clear for the dogs to go outside. It sure is pretty!

I love all these shots...very peaceful. Looking forward to our first snow soon.

Thank you Kate! you too....smiles.

Awesome photos, I love the red barn against the snow! Have a warm weekend !

Love the photo of the barn. Thanks for sharing.
Lynda in Michigan

We had a total of maybe 3 inches yesterday and Misty loved playing in it! A puppy and first snow are a wonderful combination.

The roads were really slick here yesterday and my husband said he could barely stop. He said it was worse than any of the snowstorms we had last year, and that's saying something!

Only a few more hours and you'll be free!! Happy Christmas Break!

I love the first snowfall too. "They" have been threatening snow mixed with rain here. I'm hoping we get a pretty dusting of it here on Christmas. Then it can go away again. *smile*

We're due to get snow on Sunday ... I can barely contain myself... oops another part of me popped

Beautiful photos! Hope it snows again in Texas this year. :)

So lovely! We haven't gotten any here in my neck of the woods yet... only some flurries that didn't stick.. although my husband was in Cape May Courthouse yesterday where they had about 1.5 in.

There is something special about that first snow of the season. It always makes me want to get out and about to take pictures of the incredible textures that snow brings out to astound us with each year. It's almost the same feeling I get each spring with life starts to peek out at us. While we don't get a lot of snow in Oklahoma we do get enough to remind us of the changing seasons and enough to make us dream of a 'white Christmas'. Thank you for sharing. Hopefully before long I will have some snow pictures from the first snow we have to share but for now I will live vicariously through your wonderful photos.

Glad you got home safely.

As beautiful as winter is, the driving is such a nightmare and worry so often. I dread it . Especially when the kids are out in it.

I too, love the barn!

Ahhh it looks just like Christmas there now. And 2 weeks off for you...yay!! xo ~Lili

We're supposed to be hit with a storm this Sunday here in Boston that's supposed to dump between 6-8 inches. I think I'd prefer the 1 inch sort of thing you've got going. ;)

Oh, it's soooo pretty with the light dusting of snow!

(LOL at the video w/ husband's back ... :D But seriously, I hope you do give it go because you're so creative!)

Oh, Wow. Your pictures never cease to amaze me. I don't like snow at all and it disrupts everywhere round here, too, but to capture it like this makes it look so beautiful.

I do think it a bit unfair that you southerners have snow before we do here in New England! The snow predicted for this weekend never came to pass...and we seem to be stuck with a brown Christmas:)

Gorgeous photos Kate...at least I can look at those:)

We've had a few big snows already, a Blizzard, a lake effect, you know just the usual for Cleveland! I love the barn photo, very nice.