My husband says that all the time. Just another day. So here are just a few odds and ends and random thoughts for today. The photos are all over the place, too.

For the past couple of weeks, at dinnertime, we’ve been listening to A Diary of Dixie by Mary Chestnut on Archive.org. It was written by Mary Boykin Miller Chesnut, the wife of a Confederate general. She was a well-educated Southern lady and moved in elite circles of society. She also knew many of the key players of the era and had a keen interest politics. Her diary is a rare glimpse into Southern society as well as an important historic document.

With that said, it’s kind of nice having something to listen to during the meal, because my husband and I have pretty much heard all of each other’s stories throughout the years . . . and the woman who reads the book does so perfectly. 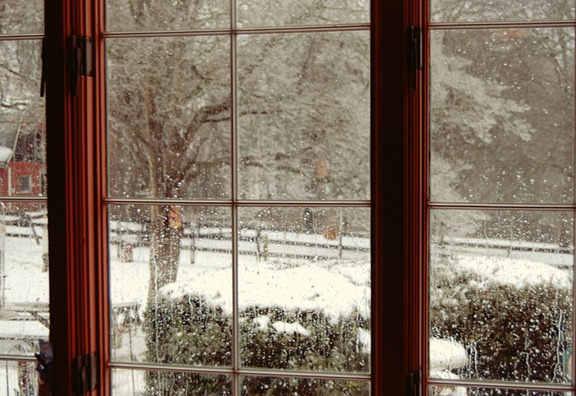 I took this photo on Tuesday morning at the tail end of an ice storm, before I left for school. Actually, it had just begun raining, so the temps were going up. I shot this through the window of the breakfast nook at the north end of the house. 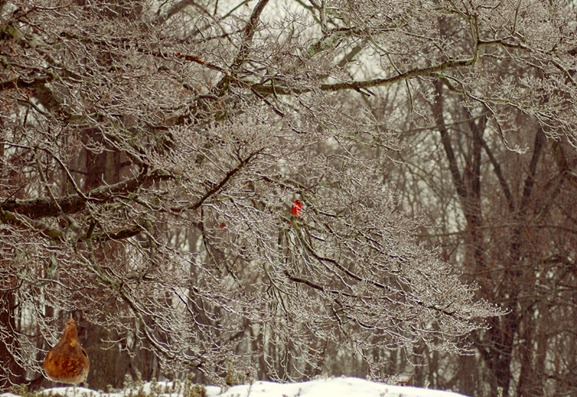 My husband took this shot shortly after I left for work. He said that the ice began melting pretty quickly, but I wished I had taken the camera out the driveway with me because it was a real wonderland in the woods. 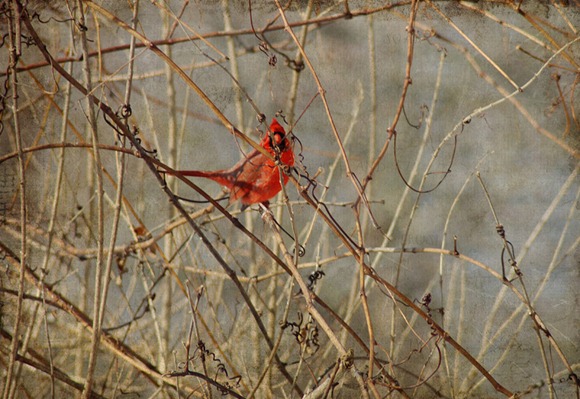 He took this shot later that morning and I love all the little squiggles. Kim Klassen texture. Because I felt like it.


And now, in response to a reader’s question, here’s the original bird and the textured bird below. 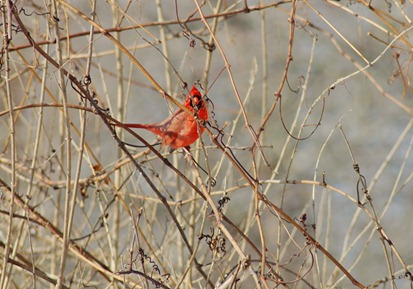 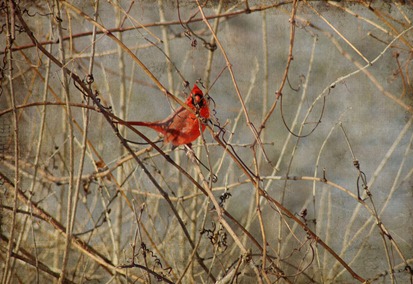 With a little texture. 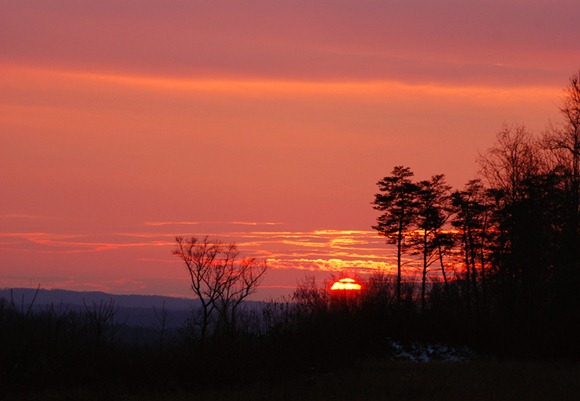 That’s my husband’s name. I don’t think he’d mind if I said it out loud. 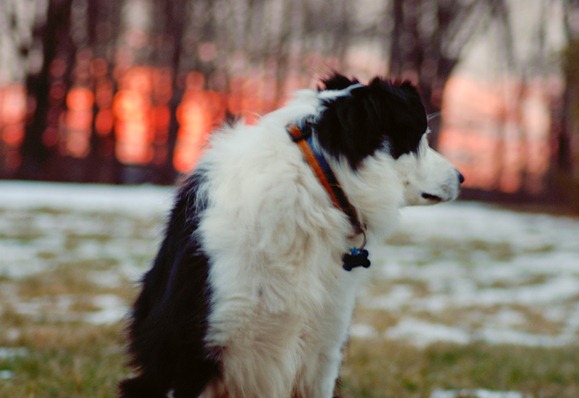 George knows him as daddy. 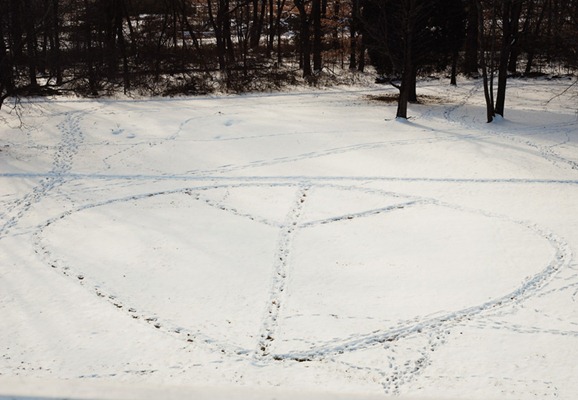 I didn’t realize my husband was up on the widow’s walk while my friends were visiting this weekend. He took a couple of interesting shots, and I don’t think he realized that he had the 50mm lens on the camera, but we found this one pretty amusing. I had seen these tracks from below and until I’d seen it from this angle, had no idea of what it really was.

And a little explanation as to the Reviews blog, where I’m hosting the giveaway. Because I advertise with BlogHer, the rules state that this type of giveaway needs to be displayed on a review page that doesn’t contain their ads. It’s not another blog that I update regularly. It’s merely a vehicle to host giveaways that I cannot post here. That’s all.

oh kate....you always make my day with your words and beautiful photographs...and this was no exception...so beautiful...

and seeing George...such a sweet and beautiful dog...

your blog is a very special place....one of my most favorites...so happy to have found you. you INSPIRE me ....

p.s. i am taking a day long photography workshop on saturday the 22nd. very excited about it...

I love your blog and was wondering if you might be willing to post the photo of the bird without the texture. I am just learning textures and mine always seem overdone. If you already have done this in another post, can you point me in the right direction?

I am in awe of the beauty in your life/environment with every post I read!

I live in California, we do get snow but only a few times a winter. Your landscape photography melts my heart!

I was at a painting class today... I find your pictures a great inspiration for my art. One of these days, between kids and work, I will find the time to get the pigment on the canvas!

And allright, Michelle. Consider it done.

Bobby Sherman... I used to swoon over him, and he's now in his lat 60's and still handsome as all get out.

Beautiful sunset photo, it's my favourite time of day.

Bobby Sherman used to be my future husband. Just sayin'.

Love the bright cardinal in the midst of the winter grays.

Kate & Andrew. Has a nice chime to it, doesn't it? My sis and her hubby have been together so long they are now known as SuenTim. Sue.n.Tim

Love the peace sign in the snow and the bokeh behind George!!! Great shots...looks like a fine day to me :)

I love your entry. Your window had me. I love Love it Kate.
Your bird untextured is stunning.
Your words had me right on the edge and not leaving. Wonderful again.
Thanks for sharing your part of the world.

Oh my, Bobby Sherman. You are the second person to mention him this week. Sigh...
All the pictures look great, I live the one of George...
We usually listen to sports in the background, I like what you do better. :)

Thanks for the beautiful photos and the fun ones, too...I needed to see them today

A wonderful day in the life of Kate, Andrew and George...oh, whatta life!!!

Taking something seemingly mudane and transforming it into something wonderous!

You had me at the photo looking outside!

Love it that you and DH dine together enjoying wonderful meal...prepared by HIM...and listening to something that is historical and sounds enlightening.

You are a highlight of my mudane day! Peace out!

i do love the cardinals...and squiggles

Good names for daddy and your furry wonder.
Love is all there is, CG! This is what I am thinking these days...for yours!...for mine!
Tracks....yes.
for us all.

Definitely love the window shot and the sunset... and of who could ever resist George?

I just found you at Jack's sight... loved your comment about always wishing to be too cute to do housework! I couldn't agree more!
These a lovely pictures and I am so happy to be following along with you!
Please join me at my history blog...(and well, Edward the cat's blog too - on Fridays!) I'd love to have you.
Ann

I particularly enjoy seeing the before and after texture shot, since I don't know anything about textures other than what I read here.

Your words are always as beautiful as your photos.

I enjoy Andrew's photos and seeing the difference in the way you both view the same scenes.

...and, of course, George is the shining star.

i enjoy the walks with you .. winter looks artistic with you and your husband behind the camera .. my second daughter was going to be an Andrew.. obviously .. shes not!!

Always a pleasure to visit and see what you have for us! That sunset photo just takes my breath away .... and of course the Cardinal and George steal my heart :)

You don't mind if I move in with you, Andrew, and George, do you? Ahhhhh...the beauty that surrounds you. xoxo

Awesome photos and post !Our
Miggy knows hubby as daddy as well!
Have a wonderful day !

I'm a sucker for "looking out the window" pictures... LOVE yours! Hope you have a great day. We are getting more stinkin' snow tonight -- how about you?

Andrew/Daddy and You, take wonderful pictures.

I believe I might just have another book that I need to read......or listen to.....smiles.

Love, Love, Love the Sunset picture! Sunsets are my favorite scence to take.
Thanks. I need to get out and take pictures of the snow we received last night.
We'll see.

Hello Kate, just stopped in from another blog (Rusty's Retreat) and so enjoyed reading this post and a few others. I'm with you on enjoying the snow while it lasts, which is not very long here on the VA eastern shore. Please do drop by our blog for a visit and feel free to comment - we really enjoy and appreciate all visits...
http://thefrogandpenguinn.blogspot.com

Today's post me reminds me of the song lyrics, "Oh...think twice. Just another day for you and me in paradise." Lovely.

Wow, you are in a whole other blog-is-phere then me...I think I'm doing good to post on the blog I have, to host a whole other blog because of commercials and rules and what have you- ugh, too much! That is why I will always keep it simple...way easier that way!
My dad is reading a book which your book kind of reminded me of, it's the journals or diary of Mark Twain. Apparently Mark Twain wrote it and asked that it not be published until 100 years after his death- which would have been in 1910- well, it just now came out. He was the number one author of those times and ran with all the big people of that time, since he figured his book wouldn't come out until all those people were dead and their relatives, he wrote very truthfully about these people and it's suppose to be a great read..dad said it was hard to get hold of the book though but I'm going to do my best!
Lovely photos as usual, you have such a way of making rainy windows look absolutely charming despite the bad weather! ;-) Have a great evening my friend...

Fabulous view! It's snowing here, as we speak, in my little neck of the woods.

Peace love and rock 'n roll ... so did Andrew do the peace heart tracks? And your, er, his sunset compliments my sunrise shot ..

love Bobby Sherman...great photos...love that you listen to a book while eating dinner...

I really like the first photo taken through the window. Really sets a tone.

And, I had no idea George was so talented! Holy Cow. That peace sign is so good. Love that it's done with little dog tracks. So cute. *smirk*

That first shot was just beautiful. I love your eye with the camera.

Your shot inside looking out through the windows was really cool to see. A little glimpse of what it's like inside the Manor House! I love that you shared your husband's name with us. And now I'm guessing Andrew did that fabulous sign in the snow. I can so relate! xo ~Lili

Thank-you for the link to the "Diary of Dixie" by Mary Chestnut. What a treat! Your photos are beautiful as always.

I wish I could look out my window and see what you do. Thank you for sharing.

I still get out my Bobby Sherman album from time to time , although I was already committed to Donny Osmond, he was still dreamy.

I have enjoyed finding your blog as the result of Reverb. I too have a Nikon (D40). I learned to use a Nikon film camera in college, and actually worked as a news photographer for a year way back in 1979, while waiting to get a 'real writing' job. This is my third Nikon since then, and I have not yet fully learned out to use it. I also take pictures in my communications job and have just bought a D5000 for that. So, this will be the year of learning how to use both. Your photos inspire me!

Bobby Sherman??? Now that's a name I haven't heard in forever! Love the cardinal pic with the texture, and you are right, the squiggles on it are wonderful!