A little snow, a little fetch

When last I wrote, I was sitting in the waiting room at my favorite Honda dealer, about an hour south of where I live, and worrying a little about my drive home because of the bad weather.

Fortunately, though, the drive home was a piece of cake – the snow stopped, the roads had been cleared and I was able to move at a decent clip. The odd thing was that the further north I drove, the less snow I saw. And by the time I arrived home, there was only about an inch of the white stuff on the ground compared to the 4 inches further south. 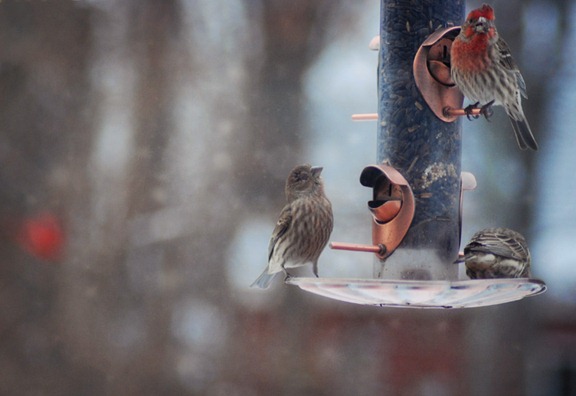 After I got here, I put myself right to work and accomplished my single goal for the day, other than the car thing, which was to get all the holiday stuff packed away. I’ve said it before and I’ll say it again: the trick to accomplishing my daily goals is to not have many.

Maybe that sounds lazy, but hey - it’s the weekend and I’m not going to beat myself up over a long list of things to do. I had two things that had to be addressed today and I did them both, making everything else I managed to accomplish simply icing on the cake. 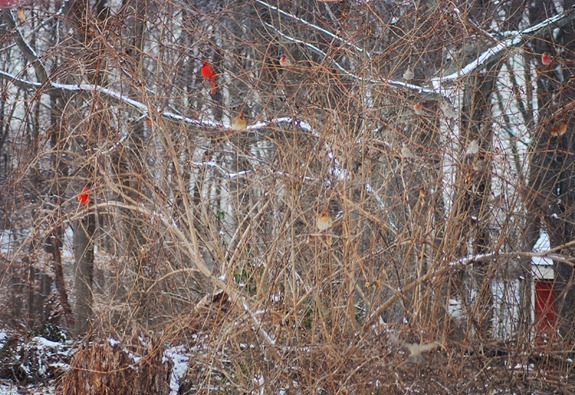 It became dark all of a sudden in the middle of the afternoon, and then it began to snow as I shot the first of these photos. There are 12 birds that I counted in this bush. I promise, there are 12. 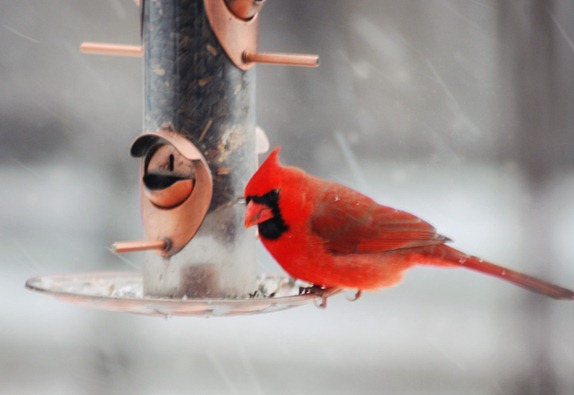 The snow really began coming down at one point.  So I took the camera outside. 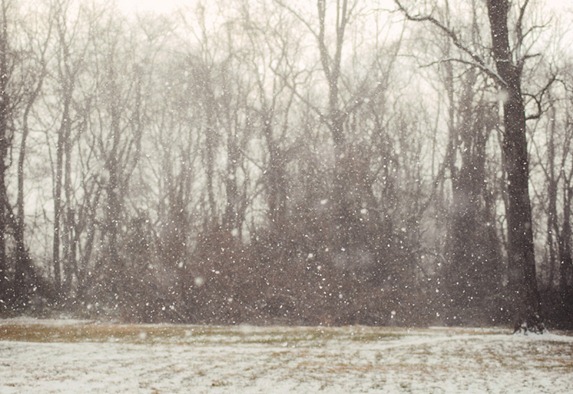 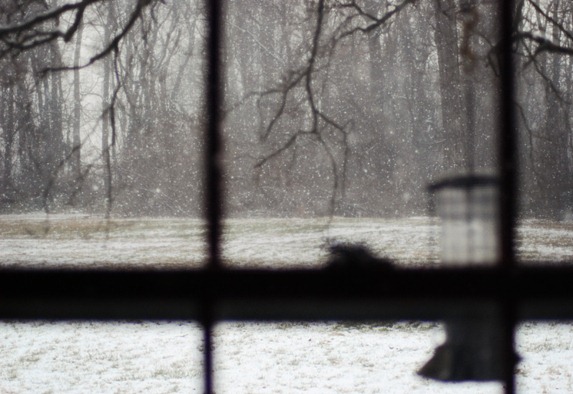 Then I put the 18-55mm lens on and took this looking out the kitchen window. 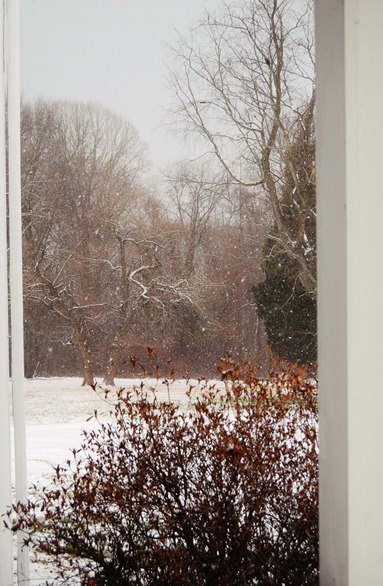 Oddly enough, by the time I walked around to the front of the house to get this picture off the front porch . . . 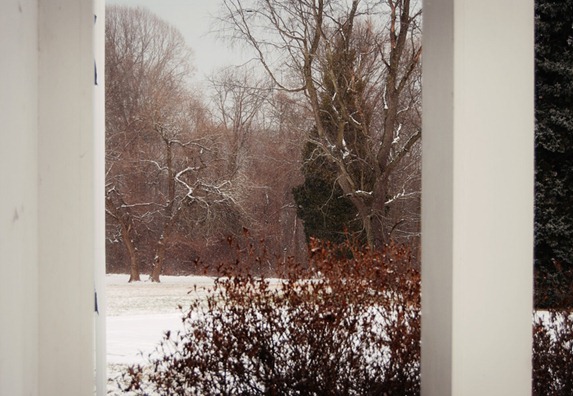 . . . the snow had completely stopped and the sun was attempting to break through the thick cloud cover.

And tonight, as I wait for dinner to be ready, it’s good to see the house back to normal again. It’s also good to play a little game of fetch in the living room with my little friend.

Here’s a 14-second video that is so boring, you’ll wonder what came over me. But as I was uploading these photos for a post, George came in from a walk with his dad. He came right to me in the living room, then went to his toy box where he spent quite a bit of time until he returned with what he was looking for.

Fetch in the living room with scary bird.

Playing fetch in the living room from Kate Young on Vimeo.

Please do not judge. The dog has his own couch and we play fetch on it.

This is Scary Bird

It's a thrill a minute around here.

I don't judge (I can't, as we just recorded our kitty purring for my text message alert). I found all 12 birds...almost missed the one in the very top left corner. Enjoy the rest of your weekend!

The intensity in George's eyes says it all. He is locked on scary bird!

Looks very similar to the excitement in our home on a daily basis. We wouldn't have it any other way.

If anyone judges you then they would have to judge us as well and we dont care what people think , we love our fur babies .Our dog Miggy is the same , has her own couch and we play fetch with her toys in the house as well, she has her own toy box to ! Great photos and movies of George ! I love your blog ! Have a great day !

I have photos of Miggy on my blog she is on her couch cuddling with her teddy ! Sorry about the delete internet went down , never had that happen ! Have a great day !

glad you made it home safe and sound...love the cardinal...

I'm jealous your bird feeder has birds. After a month and a half mine still has not had a single visitor.

And I won't judge. My dogs LOVE to play fetch indoors. Its the only way they'd get exercise this time of year.

Glad you made it home safely! We had about 1-2 inches here. And George is SO cute!

Well, that is pretty exciting, CG...your living room is like being in Vegas compared to over here where my dawg is passed out after a long walk and she has nothing has splendid as scary bird being tossed about!

So glad you made it home safely! Our dogs play fetch in the house..they are part of the family, and we enjoy seeing them romp and play in the house! Maggie (our lab) was passed out on the couch next to me, got bored and moved to the floor. Ahhh, the life!

i like your style .. not too many goals and the jobs get done!! and you have time to share your amazing photos birds and fun playtime..glad the drive home was not too scary Kate.

We are supposed to get snow on Wednesday.

My dogs sleep on the downstairs couch at night. They even get their own stocking during the Holidays filled with toys.

i love those red birds..cardinals? we don't have them here....how i wish we did...and you KNOW i love the fetch in the living room...it's what we do here too with Teddy

happy to visit here with you and george today

you would fit right in at my house. i love the picture of the snow with the 70-300mm lens...perfect

Aw George is precious! I've fallen in love with border collies since finding your blog.
Your first picture of the snow falling is my favorite. It looks soft, yet magical!

Love those cardinals. I always thought they were rather territorial and have never seen them in anything other than pairs. OF course there are now so many cats in my yard that cardinals have designated this a no-fly zone, so I've lost touch with them.

Glad you made it home OK and were able to relax with George and Scary Bird.

No judging here. We play catch with out dog in the house too (and he's allowed on our couch). I love the cardinal pictures, very pretty.

Hey, I found the 12 birds too! Too bad this wasn't a test! I would have finally won something!

Love the 'scary bird' but isn't that a Paraguay falcon??? Hehehe!

Hope by now you're all snuggled in your bed with your brand new flannel sheets!

Rereading your scary bird post had me cracking up as I had forgotten all about the "Paraguay" falcon! Oh and maybe I'm seeing things, but I'm thinking there are 13 birds in that shot, or maybe I just have snow in my eye again! George is so beautiful. xoxo ~Lili

As always, you delight and entertain me. Wonderful photos!

Glad you made it home safely:) Nothing like being home safe and sound and playing fetch while it is snowing outside...

...and now I'm really thinking about my next new lens:) We had lots of cardinals at our feeder during the snowstorm too but I just don't have a long enough lens to capture any thing...there is always something to want!

Maggie and Lil would play fetch forever if I could last.

The cardinal is y all time favourite bird - you are so lucky to have them, I do wish we had them over here too.

LOVE the george video and Love the 12 birds in the tree :) they say its gonna snow here after midnight... so we will see if we are shut down for a couple days!

Hey Country Gal,
I have not been checking blogs a lot of recent, but needed to see how George was doing...

I hope 2011 brings you many great photo subjects and much joy!

Gladd to see you and George having so much fun....and I love the car ride....to sad it only took a sec.
for me to watch.

....just doing a little sunday morning blogging...stopping by my favorites...

happy sunday to you and george

so what do you offer those lovely cardinals to lure them into your yard? don't think I've ever seen so many in one spot before.

we are bearing down for our, yet another, snow storm this winter...lots of books to read by the fire and a little libation to boot!

So envious of all those beautiful cardinals outside your window. I think George is adorable and is more than deserving of his own couch.

It was cute. He was so proud of himself when he brought it back. I love Cardinals--noticed the females, but did not count them all... I'll take your word for it!

I have been looking forward to chance to come here and immerse myself in your world.

I so heart George.