The Wind in the Willows

Greetings from Maryland on this mild February day. Yesterday was unusually warm but today it’s back to normal, which is fine for me – considering that it’s February. It’s in the high 40’s and we’ve got some good wind, but the sun is shining on the land.

I love sleeping in late on a Saturday morning. Actually, anything after 6 AM is sleeping in, because that’s what time I get up on the week days. (Anyway, that’s the time the alarm goes off). 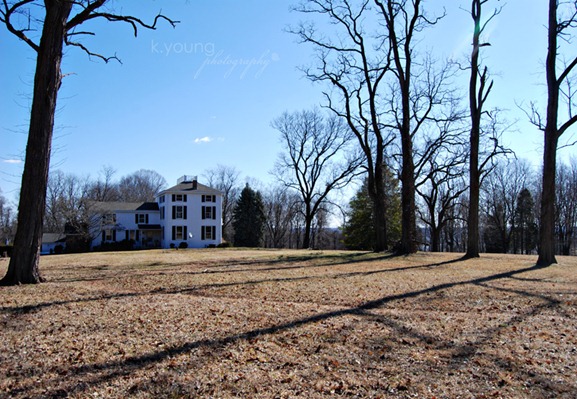 I had coffee on the porch this morning with my husband, who had been up for hours doing his daily walk with the pup. I took a couple of short videos which are below.

We were having wind gusts quite often and it was fun to watch while we sat in our protected little area of the front porch.

By the way, I couldn’t see a thing while I was filming. The little Sony Handycam doesn’t have a glare proof screen and all I could see was myself. Squinting.

After coffee and a nice walk with George, I worked on some photos I took this morning. I haven’t taken many pictures this week and had begun to miss it. So I poured the last of my Kellogg’s Granola, splashed on some nice cold skim milk, and headed into the living room to upload my images into the hard drive.

I love playing around in Photoshop. If you’re new to actions and textures, deciding which one to use – especially when you have a vast library – is the first step. I don’t like spending hours sitting around on my butt though, so I tend to make my decisions quickly. But today, for some reason, it took longer than I wanted to get this post up. But for what it’s worth, here’s what I have for you on this fine morning. 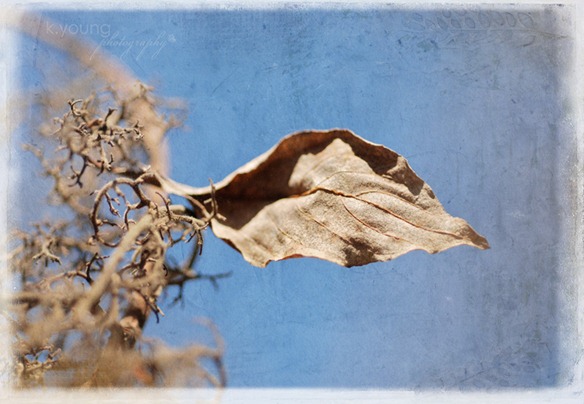 Leaf on a grapevine. For this, I used the SOOC version, adding a Kim Klassen texture called Nature’s Beauty (soft light blending mode) as well as her February Magic Edges texture (screen blending mode). The original (SOOC) and the finished version are below because I’m unable to do the mouseover effect anymore. I haven't been able to do it since I went to Blogger’s new template last fall. If anyone knows how, please let me know. 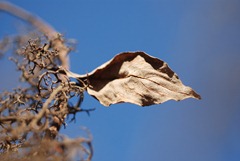 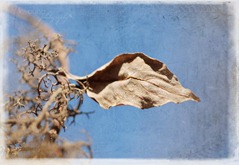 And for those of you who loved my husband’s outdoor decorating scheme, I grabbed a shot of his buoy collection before I came inside. 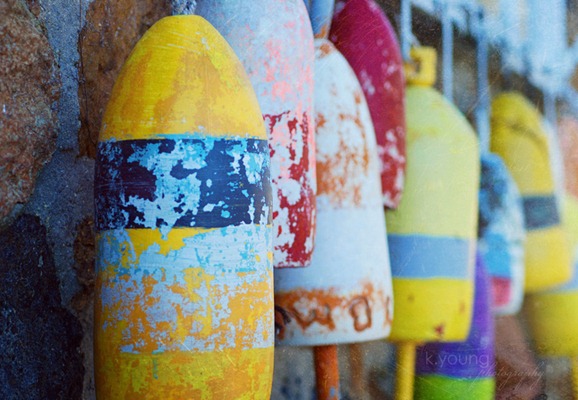 For this I used Florabella’s Soft Color Pop action and then Slice Like a Ninja, a sharpening action from Totally Rad. (For links, see my sidebar). I also added two SkeletalMess textures, Infectious Grooves (hard light blending mode) and Hell Bound (soft light blending mode). I love the names of some of the actions and textures, don’t you? Original and finished is below. Click on photos below to embiggen, if you like. 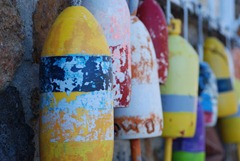 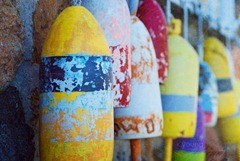 For some reason, I felt like putting my watermark on everything today, too. I should probably do it all the time but I’m too lazy. 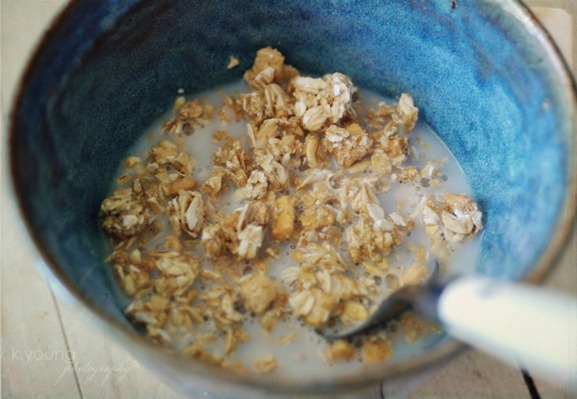 The original looks so close to the finished product on the photo above, but I’ll post it anyway. I worked on it because the SOOC version had the bowl and cereal a lot brighter than it really was. I ran the Super Fun Happy action from Totally Rad, then used a Les Brumes texture and called it a day. 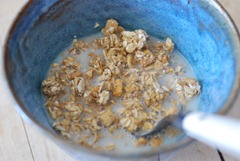 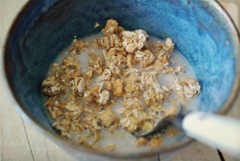 And now I’m off to run some errands. 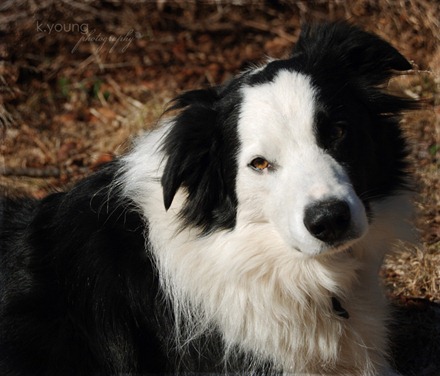 And I’m taking my little friend here with me.

Have a wonderful weekend, all ~

I feel as if I had been through something very exciting and rather terrible, and it was just over;
and yet nothing particular has happened.

- Kenneth Grahame, The Wind in the Willows

I apologize for the heavy photo load in this post. It may be contributing to the videos not loading properly. If they don't come up, try reloading the page. Other than that, apologies.

Good thing you've got good sod in place or you'd have a dust bowl today. Sounds like March already...

Love the photos! Squiggles on the first one (your fave). Beautiful colors on the buoys. AND GEORGE! The sweetest ending to a post ever! :)

great photos...enjoy the rest of your day...

Awesome photos and video. It was sooo windy last night here our power in our village went off from 4 am to 11am thats what time we got up, Miggy is home now I posted about it and have a few pics of her in her bandages! Have a great day !

Everything came up fine....and I too, sat out this week and watched the wind gusts play with the trees....feels like spring here today, 70's, and sunny....hope your day with George is fun!....smiles.

I really like the buoy collection! So colorful and unique.

The buoy photo is my favorite! And soon enough all those brown leaves will give way to green buds. Its almost spring :)

As ever, totally delightful! How's the kitty? I love your kitty. Oh, must say, the bouys, feeders, windows, rock wall, peak of the building, what a FABulous photo. Tell dh I love his collection and its placement. In southern CA our wildflowers are starting. What fun!!

no snow on that lawn! how wonderful. The sound of the gusty wind was spectacular. It is so nice to wake up 'late' and sit on the porch and watch the world go by. Loved your photos. I wish I understood P-shop, but I am working on it. I hope you have a great rest of the day. ;o)

I love the buoys. Meant to tell you that the other day, but now I'm glad I waited. These shots are so colorful!!

What a wonderful morning you've had! I do like the buoys...and George:)

The photos are excellent, as always

No need to apologize! I espeicailly enjoyed the little birdsong on video #1. I think I may be ready to learn something about PhotoShop. Say a little prayer for me! {smiles}

I love the buoy collection. And the cereal. But I am a fool for good cereal.

I have to admit that I don't always (usuallly?) think your photos are better after tinkering, but I REALLY love what you did with the lone leaf!

I was waiting for some random house to land on me today. And only my feet would be showing from underneath the house.

The wind in NJ is ridiculous!

Love the buoy collection. What a great find for your husband.

We have another blizzard heading our way, I envy you having breakfast on the porch!! Love your photos and laughed at the "spending hours sitting on your butt too much" statement. I've been doing plenty of that trying to learn photoshop.

I love the buoys now. I was sort of with you when I first saw them hanging behind the bird feeders, but they've grown on me and now I love them. Sorry.

I love that cereal - I eat it straight out of the box, no milk.

The audio on the wind gust video sounds much like a recording on top of Cadillac Mtn. Love the close up of the buoys, they always make for such great subjects. I suddenly have a craving for a bowl of cereal too. Hugs, ~Lili

I love clear, windy days! It was in the mid 70s here today so I stayed outside a lot and enjoyed it. I love your textured photos, and Shadowhouse and Kim Klassen are my faves!

those "redneck" buoys (which I really don't find redneck) made a beautiful shot!

Love the videos! I felt like I was right there! All the photos are great, but my favorite is of the pup! Have a great weekend!

It was beautiful but a mite windy here, too. Love the shot of the lobster pots... You could probably shoot them really close and try to make some textures... :)

I love it that the ice is finally gone here -- now we can walk without danger to life and limb. And that sounds like we are ancient, but the sidewalks and park were impassable and the roads are populated by Jersey drivers...
xoxo

I really love the shot of the bouys. The colors and textures are just great!

Hope you are enjoying your weekend.

Very, very windy here yesterday too...and COLD! I love reading how you have processed your photos...I learn so much. I feel somewhat comfortable with textures now...not that I am good at it...and will attempt some actions soon...I get my inspiration here! Thanks!

Gorgeous photos! I especially love the one of the buoys, so beautiful.

Who is that handsome guy in the last shot???

Hi,George, glad you got to go.

Love your texture shots. It is very difficult deciding on the right one. My library is growing by leaps and bounds each day. But oh how I love them.

The buoys look like muted jelly beans or something.
Or maybe I'm just jumping ahead to Easter.
We had wind and a bare lawn until last night.
Just in from shoveling yet again.

oh well. These weeks ahead are the tease of back and forth .