Winter slumbering in the open air

I spent much of my afternoon today sitting in the yard with my husband in the sunshine, with George at our feet. After a rather iffy morning, the sun finally broke through the clouds and I could almost hear the sigh throughout the land.

Sunshine on a weekend is so wonderful. And what a change in temperature from just a week ago. And I saw today that the lilac is beginning to bud.

I read a magazine that came earlier in the week that I was saving for just such a day. I love Coastal Living magazine. I took some photos of birds and some of them turned out alright. And I also shot these handsome portraits of our best buddy. 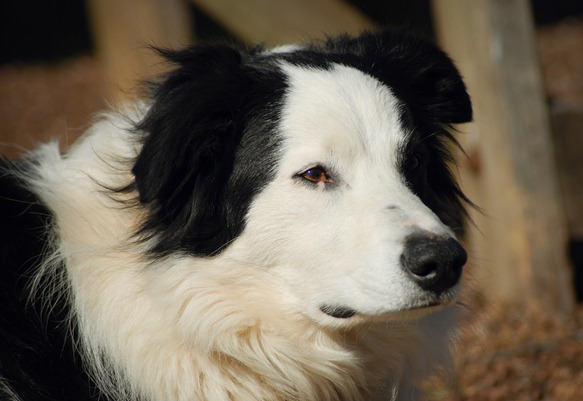 He loves us always. 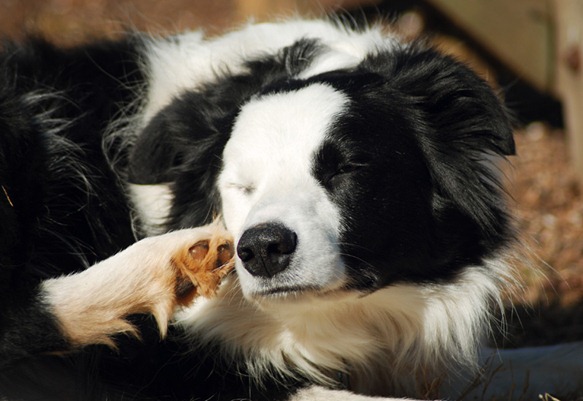 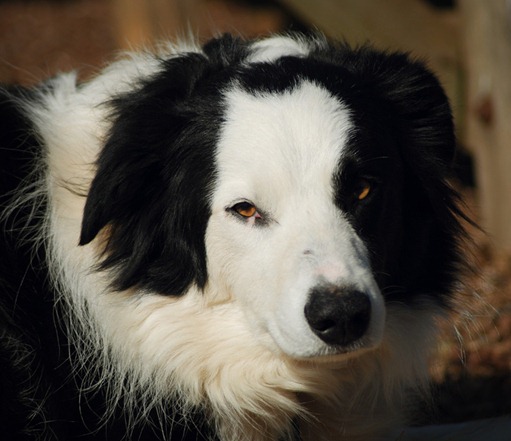 And the sun was making him droswy so he took another little nap.

And winter slumbering in the open air,
Wears on his smiling face a dream of Spring ! 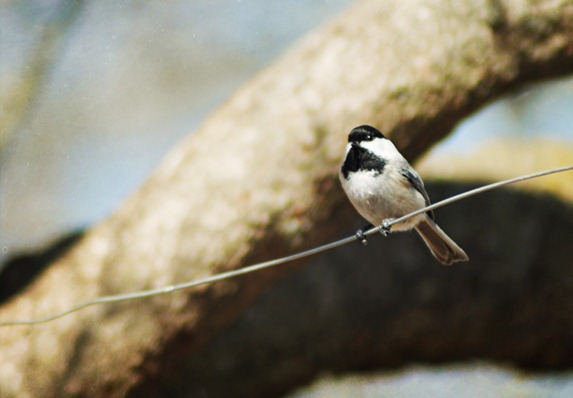 The little birds love to perch on the wire my husband has strung from the tree to the house. As I’ve mentioned before, he has all the feeders – well most of the feeders hung from the wire. It’s completely foiled the squirrels who have been reduced to foraging underneath them rather than eating directly from them. 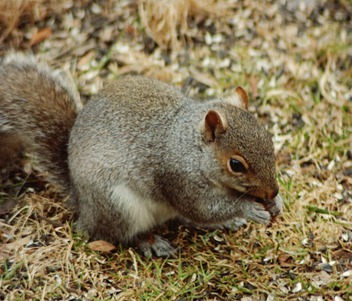 Silly squirrels – just on the other side of the yard are masses of nuts that have fallen from the trees just waiting to be opened. I’m guessing it’s much easier for them to eat the fallen sunflower seeds, though.

I’m waiting for the Oscars to begin and I always enjoy the opening bit. I heard this year that there were going to be children doing scenes from the nominated films, which, in theory, sounds pretty cute. We shall see. I do like James Franco and Anne Hathaway for the hosts. It should be interesting, to say the least.
Later this week, I’m sharing some bloggy love. More on that to come.

Until tomorrow, my friends . .

I have to tell you that next year, I am having my OWN wire bird hanger thing........your husband has started something.
I can't believe that you have lilacs budding......you are more than a month ahead of us.
Crazy to live this far north.

Sounds like you had a lovely day... a much needed day to regroup and get refreshed!

Your husband's wire idea is awesome! I have a bird feeder station that my husband just built and so far the squirrels haven't found a way to get to the feeders... we're keeping our fingers crossed!

I forgot to mention that I love your pictures of George!

I can't get enough of George.

Glad you had a nice day.....me too. I just enjoyed winter today....just because it's winter!

Love me some Coastal Living too Kate! I save mine for just the right moment too....hope your week is better starting tomorrow...smiles.

I cannot wait to see the Oscars...I have not seen many of the movies, but I love the red carpet! Have a great night!

George is such a handsome young man
What a lovely day you've had!

The sun never made an appearance here today, but your pictures are always a ray of sunshine! I know that sounds cheesy but it's true!

I like that wire idea. How do you keep the feeders from sliding?

I don't expect to see lilac buds until sometime in April. I'm envious!

Beautiful pics of a gorgeous pooch, as always.

We had a reminder that it's still winter here - snow this morning!

It might sound silly but I love photos of dogs with their eyes shut and these photos are great!

George is, as always, so handsome.

It certainly was a wonderful day - and I think we are all looking forward to weather like this on a more permanent basis.

Our squirrel (I think we have maybe two or three, but one we see on a regular basis) gave up long ago on getting into the feeders and hangs out contentedly on the ground munching on the bird's scraps. It's like getting the free government cheese!

Have a wonderful week.

Dreams of spring....ahhhh. Yes. Love the sleepy look on that doggy face.

George is my weakness...thanks for feeding it.

I'm not sure what I said other than "those wascally swirros". ''Glad the bird feeder wire is keeping them off the feeder itself though... Great job on your husband's part with rigging it up that way!

Hurray that spring seems to be setting in where you are! Our red bud tree is bursting out since day before yesterday. LOVE the fresh pinkness!

Glad you got to enjoy such a nice day!

Yes! Love Coastal Living and all the photos of the homes by the water. I surely must have lived in these homes in another life!

Great Sunday! Happy Monday to you!

Sounds like a lovely weekend! Rainy and dark here today, but I discovered the snowdrops have arrived in the garden, so I am happy... :)
xoxo

Your day sounds wonderful. Hope your week is just as great.

Glad you had some sun too. We did briefly yesterday and warm weather but this morning the wind she blows cold!

It' s been raining most of the night and while it is a mess, I can feel spring. In my soul. And it's wonderful.

I would like to figure out a way to discourage the sparrows from taking over at the feeders. Well , in all honesty I've been putting seed on a little garden bench.
They are starting to outnumber the juncos etc.

Have a peaceful week.

Lilacs!!! BUDDING??? *sigh* We're atleast a month behind you.

I thought Anne did a stellar job - she is adorable..that white dress was a stunner - my favorite of the night!....

Actress weirding out and dropping the F bomb, not so much.

i dont watch them but read on facebook that some woman decided to drop the f bomb... what a glaring accomplishment... GAH.

Loved the opening by Ann and James. I ended up watching Holmes Inspection.

I must go check my lilac bush--we're south of you, but further inland, probably.

I wish cats were the loyal beasts dogs are, instead of just being beasts. Beasts that tattoo their teethmarks into your hands. Oh well, just this last one we've adopted does that. Maybe she heard the old term "biting the hand that feeds you'?

Thinking she'd do better at another home. Or outside. Does George need a beautiful cat to chase?

A all round wonderful day ! Love your photos and post . Hubby and I do the same thing when it is warm and sunny ! Last night we had rain I mean it was poring and two thunderstorms with it a lot of our snow is gone thank goodness and it is to get nice and warm for the next few days. Spring may be early I hope. Have a great day !

The sunshine here in Georgia this weekend was wonderful. I was out from dawn till dusk both Saturday and Sunday, then Sunday night I was almost in tears. Two Motrin, a bath and a nice glass of wine later, all was well with my little world again. I always over-do-it the first few days a Spring. This morning my shoulders are a little burned, but the garden area is well on its way to wonderful.
the wanna be country girl - Caroline

Hated Hathaway & Franco as hosts .. didnt see any kids enacting the nominated films but I did go to sleep at 10 pm only to awaken this morning to learn my boyfriend Colin Firth won best actor and The King's Speech won best film .. I want to see it again it was so good .. maybe we can watch it this coming weekend.

Lovely photos as always! Good to see George - I am off to see my two on Wednesday!!! Collie paw pads - wonderful smell when you kiss them! Kx

How did he get so purdy!

I like Coastal Living magazine, too, although their photo reproduction can be a bit 'off' sometimes. I haven't been able to find it lately.

I enjoyed the Oscars this year, too. I thought the stage was magnificent, but James & Anne didn't make a very good pair. He just came across as being very uninterested, which made her appear to be trying too hard. I was also surprised that a number of the 'big' names weren't present in the audience: Clooney, DiCaprio, Matt Damon, etc. Do they only show up if they've been nominated? Doesn't seem very supportive of their fellow actors.

K...stepping off my soapbox now. (...and, I didn't even mention how drab & off-key Gwynneth Paltrow's singing was.....oops!)

George is such a handsome boy! Beautiful portraits you have there.

We had a sliver of sunshine yesterday as well, but most of the weekend was overcast.

I put new seed cakes out for our bird friends and a dastardly squirrel has discovered the loot! We shall see to what lengths I am willing to protect the birds' food.

Hope you are having a great day!

Oh man, lilac buds already? George is so handsome, your husband is so clever and yes that sure is a silly silly squirrel right there. xo ~Lili