My afternoon, in photos


I was sitting outside in the sunshine, minding my own business. It was chilly, but in the sun, my shutter finger wasn’t frozen. I sat still. And closed my eyes.

I could hear birds in the distance, children playing, traffic a long way away. The drone of a plane, and then the flutter of wings. The birds had come back to the feeders. 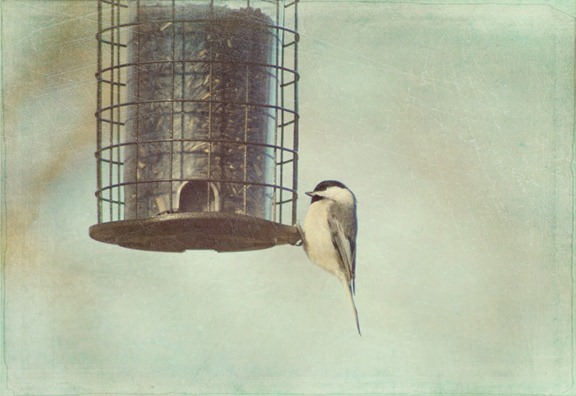 As much as I like winter, I love the promise of spring on a sunny day. I captured a chickadee at the feeder. 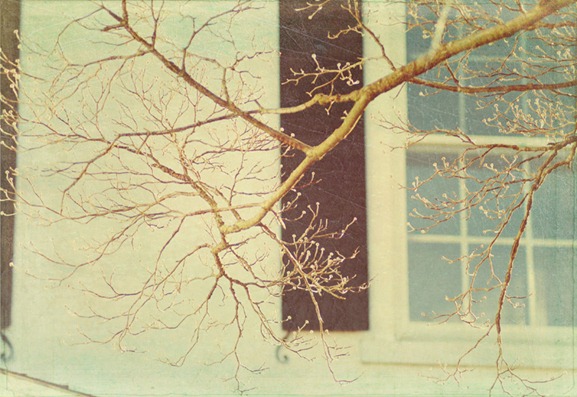 I took photos of the branches against the windows of the house. 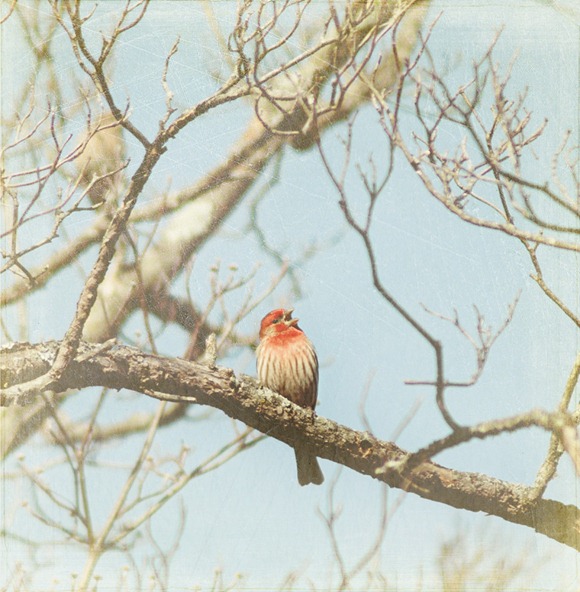 I captured a male house finch as he called to his mate. 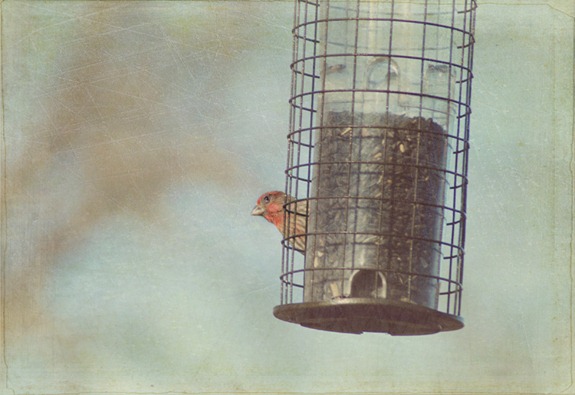 I watched as another had a bite to eat at the feeder. 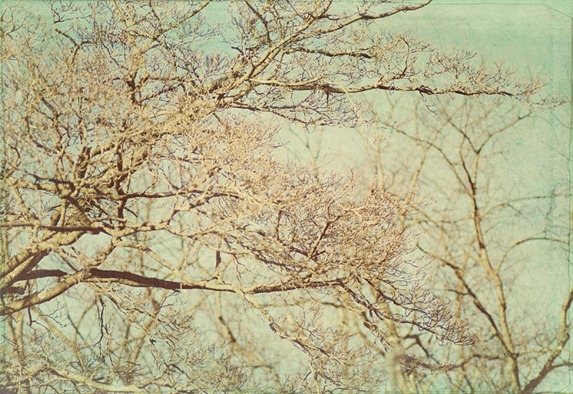 It felt so good being outside. I could almost smell the earth coming alive, although there’s ice and snow left in the shady parts of the property. 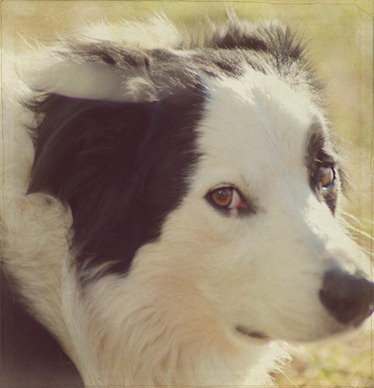 I took a portrait of my friend as he lolled about nearby. 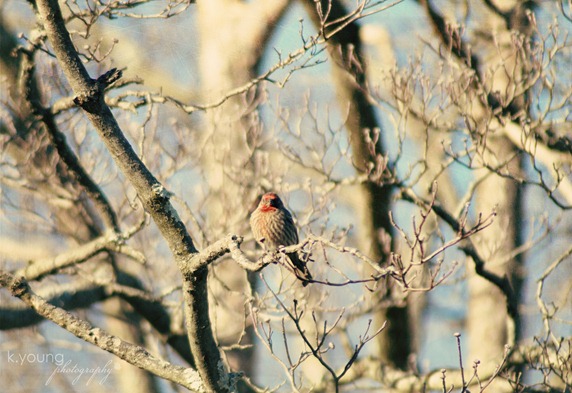 I could hear the beating of the bird’s wings as they flitted about in the branches above me and I closed my eyes for a few moments. 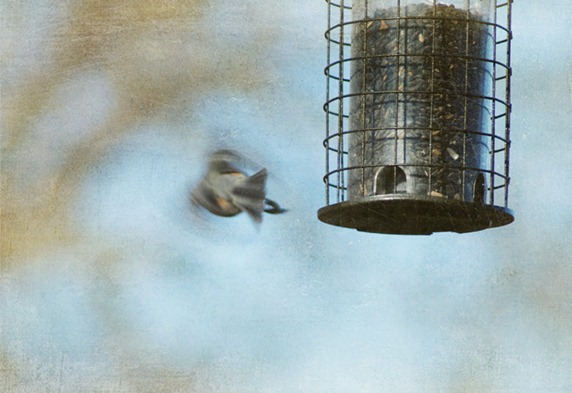 And then I opened them. And I saw what looked like a large bird approaching the feeders. All the birds took off, including this tufted titmouse. 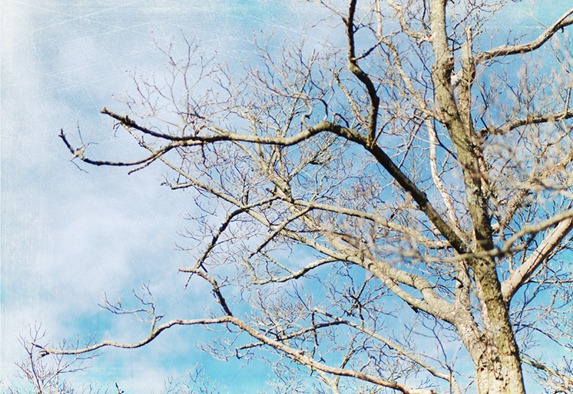 A hawk! Everything happened so suddenly that all I could see was a flutter of wings – large wings.

And then all was still. 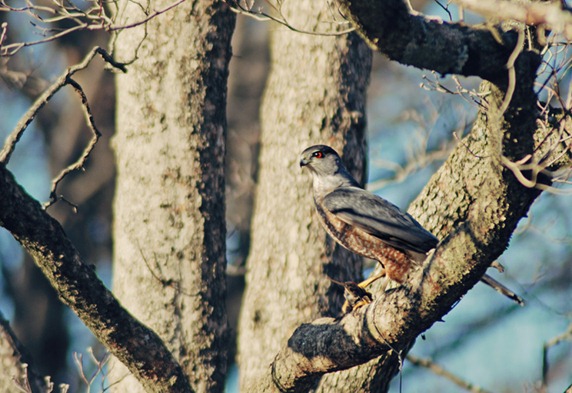 And I captured him as he perched in the dogwood tree. 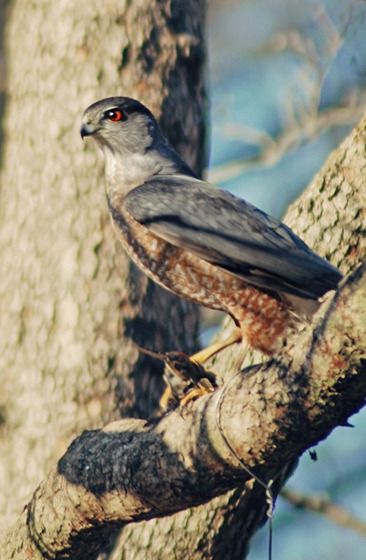 And it wasn’t  until I opened the photos in Photoshop that I noticed that he had also captured something. You can see it here.

And it was awhile until the birds began to return to the feeders.

I do believe that is the same sharp shinned hawk again. They look a lot like the Cooper’s hawk, but my husband believes this to be the sharp shinned. Hope your Monday is a good one.

He's so beautiful, but they are terrible on the songbirds at the feeders...

I love all the effects you gave the photos. The 2nd one of the branches against the house looks like a vintage postcard.

Glad you had a nice afternoon even with an intense visitor.

uh oh...so i am going along and loving all of it..and then i saw it...a hummingbird, huh?

loved seeing your photo of your sweet, sweet friend George

i was so happy to see you here today...

They are vicious, aren't they??
I haven't seen any at my feeders, and I am glad.

Oh, those darn Kestrels, they are serious hunters. I have seen them take a partridge bigger than himself. I'm still glad you were so relaxed as to close your eyes. You were still very quick with your camera, girl. Awesome photos, love the heart-throb male house finch singing his lungs out.
BlessYourHeart

Wonderful shots, Kate. Of course it's always difficult to witness the kill (though thankfully, you were unaware until looking at the photos) but of course they have to eat too.


Aloha from Honolulu
So SORRY I've been missing too long!

we've had several hawks scaring our birds off lately...

that male finch looks like he's saying "and while you're up, get me a beer"

and ummmm what exactly does that hawk have in his hands for dinner....or do i mean who ?

wow. i guess at this time of year the little birds at feeders are easy targets. those eyes are incredible.
i especially love the photo of the titmouse in flight.

excellent captures of the birds, especially the hawk. Sad about the little bird tho...
take care and have a nice week!

what a gorgeous bird. The whole cycle of life in nature always makes me a little sad but it doesn't make me hate the predator.... so what a gorgeous, regal looking bird

Nature is so cruel and harsh. I'm naive enough to wish everyone was a vegetarian and we could all just get along. I do love your textures, though, and hope the kill was swift.

beautifful pics love the hawks pics... even though he got a pretty bird... i nearly cried when the hawk here got one of our big wood peckers but I was so pleased when he got a pesky squirrel... so such is the circle of life... love love George :) happy sunday night :)

Those hawks are so beautiuful though! ...and so are your photos:)

From Beyond My Kitchen Window said...

Great photo of the circle of life. Sad though.

Everything has to eat, but it's sad that the hawk chose one of your little sweet birds for his meal. Even with prey clutched in his talons, he (or she - I don't know how to identify the differences) is a beautiful thing. That red eye is magnificent.

Wonderful photos, Kate. Your afternoon in the sun was well spent.

Oh your bird photos are so beautiful but that horrible hawk!!! Unfortuantly I had to clean up a bird on the weekend that had been brought inside as a gift for me!!

That reminds me of the hawk I saw tearing the head off of a mouse. Yuck!!

The life cycle is sad and beautiful at the same time.

The branches against the window panes...poetry...
and your hawk is magnificent!

I'm surprised we haven't seen hawks at our feeders grabbing prey. We certainly have hawks in the area. Great hawk shot.

They are magnificent photos, and I loved your timeline and how it made me feel as though I was there with you.

As harsh as it is, it's the way of the natural world. Sometimes we'd just rather not see it in the tranquil settings of our own yards I suppose.

Marvelous images. The first and last, especially. They look like paintings!

Oh wow Kate, as disturbing as it must have been to see that last capture, that is amazing that you caught that. Yesterday before daylight we saw a small owl sitting on our branch near our feeders, most probably waiting for an early morning finch until I inadvertently scared him away. Your birdie images have such a peaceful and sweet look to them and I really enjoyed the narration of your afternoon. xo ~Lili

UN. REAL. The colors in your photos are exquisite but the one with the hawk (despite whatever he has clutched in those talons)? Stunning. Just stunning.

Wow, poor little birdy but that is the nature of nature isn't it.

amazing you captured such an act of nature! have a good Monday. as the song goes "It's just another Manic Monday".

Awesome photos. We have the same hawk here keeping an eye on the birds at the feeders. You do the exact same thing as I do just sit outside enjoying the sun with my camera and take photos of what every catches your eye and just listen to the wonderful nature thats around the area .Have a great day.

Poor little hummer!
I don't know why I've always had a kind of affinity for the regal hawks. I know they're predators--and a farmer's enemy, too. My husband would love to kill every one he sees--but they're protected--at least the red-tails are, I know.

But there's something of the loner in them that makes me think--of me..(in my mind anyway) sometimes. Not a good thing, I guess, but at least I know I'm no predator.:)

I believe that is an American Kestrel...is that a Carolina Wren he caught...the beak is long I first thought it was a hummer but it is too early for them?!!
Madi and Mom

So lovely, up until the hawk shows up and ruins the party! Beautiful photos.

The hawk, even if he is menacing, really is beautiful. What great pictures.

Beatiful captures Kate .... and you captured the cycle of life as well.

Oh beautiful work - that shot of the male house finch calling to his mate completely stole my heart.

I really enjoy your blog! I've passed along a Stylish Blogger Award to you. Don't feel obligated to participate if you are swamped with work, but I wanted others in my teacher circle to know about you.

Fantastic captures! The hawk is so beautiful, even if it is a bird of prey, terrorizing our little bird friends. But I am always in awe of them. Always.

I was enjoying the dreaminess of the post, well, until the end.

~sigh~ The food chain of life.

I love raptors. That said, I hope this one doesn't buy a place in the neighbourhood and stop by for lunch on a regular basis.

Kinda makes one wish they could go back to the days when the squirrels were the biggest problem at the bird feeder.

It's a circle of life thing, huh? That is a fantastic capture, Kate!

you need to watch the DVR Gasland.
and.............take a stand. It appears to be something we all need to do because it is fundamental to life. I love your blog. Please go for it.\Just the right peace

Looks like a young one! I like how they almost look like a falcon. We get them here too. But they are birds too, and beautiful ones at that, so they are welcome here. Although I do not put out the welcome mat. :) Funny we go up to Hawk Mtn often and have never ever seen on up there, but in the backyard, nearly daily!

oh nature. i know it is necessary but sad to see

It's all so beautiful - the world you live in - minus of course the food in the hawks's foot.....but I digress! ;o)

I really wanted to get out and use my camera on Sunday, but I wasn't feeling well so I napped in the sun on the sofa instead. It was rather nice, but left me with not much to blog about this week!

Your bird photos inspire me to try to catch a shot or two, but they never turn out like yours!

Well, Tammy - mine never turn out like the beauties I see on Flickr either. But I keep trying with the equipment I have. It's all I can do. But thank you nonetheless ~

Fantastic post. I was verifying time and again this site and I am quite overwhelmed! unbelievably useful facts mainly the first part. I appropriate be concerned for such facts much. I was looking for this meticulous facts for years. Thank you and enjoy.
Free Photoshop Online.

You really have nice skill to take best n best photography, i have tried many times with my tools which i have but but picture never turn out so natural.
Any tips for me