I have met some wonderful people since I began this thing called blogging nearly four years ago. And when I say met, I mean that they are mostly through the internet.

But I have actually met some people for real, and during our vacation last week to Maine, I made plans to meet up with blogging friend, Lili from Fearless Nesting. Lili blogs from Sorrento, Maine and since she was only 15 minutes from our vacation rental, I knew it was imperative that we meet. 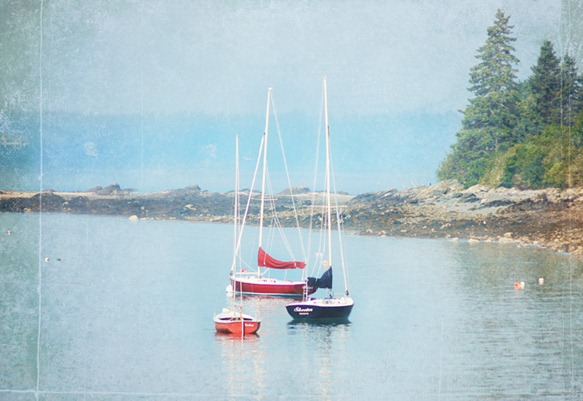 Lili and her husband Henri live in Sorrento . . . 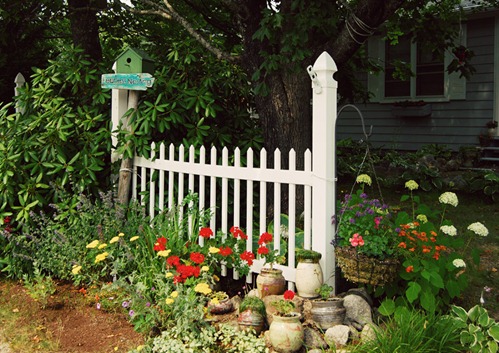 . . . in a beautiful home along the coast. There are gardens and a long path down to the shore where along the way you’ll find swings that Henri made which hang from very high branches. I wish now that I’d taken a photo of one to show you.

I want to go back now just to swing in one of them. 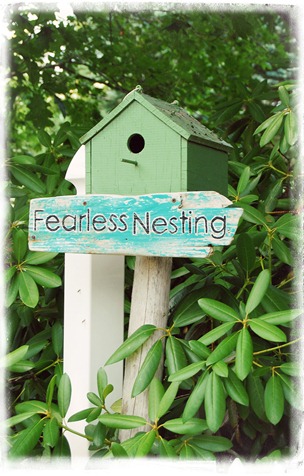 Henri took a photo of me with Lili and after I saw it, I thought “what the hell was I wearing?” That morning, my husband and I went hiking over at Schoodic Point. I texted Lili afterward and asked her if we could meet later that morning and I remember saying something like I was going to head back to the cottage and change and then come right over.

Well, I didn’t feel like changing and had I used my noggin’, I would have remembered that photos will probably be taken and I should wear something decent. 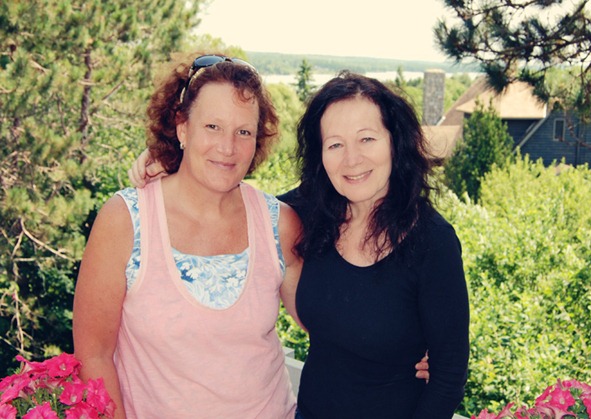 So here we are with Lili looking very chic and me wearing my lovely knock-about clothes. Ah, but it’s all good.

I’m not really a fashionista anyway. 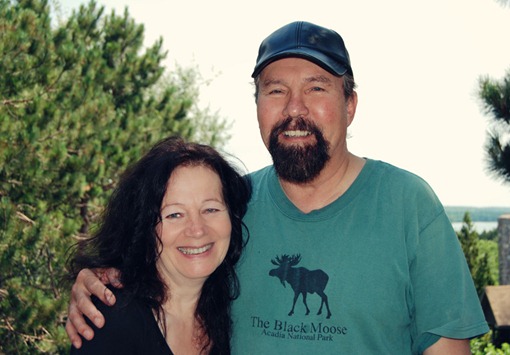 We all went to lunch and had great chowdah and later in the week, I came back and Lili and I went for a drive and took some photos at the harbor in Sorrento. 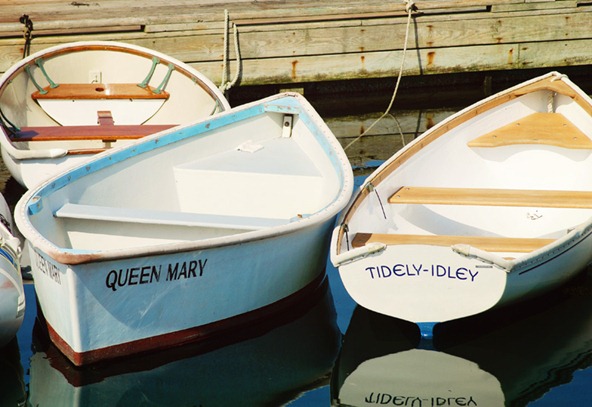 All of the little skiffs seem to have names. I pronounced the one on the right incorrectly, thinking it sounded like tiddley winks. 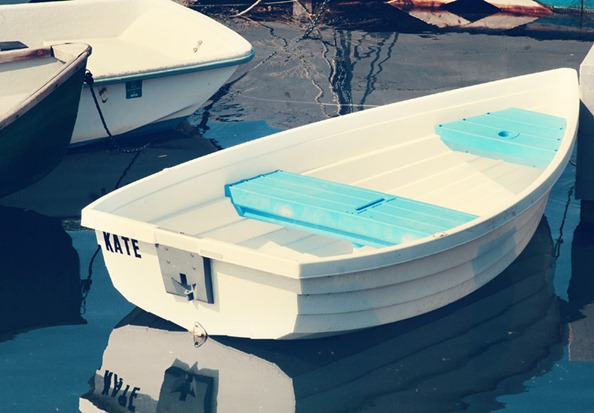 And there was even a boat named for me. 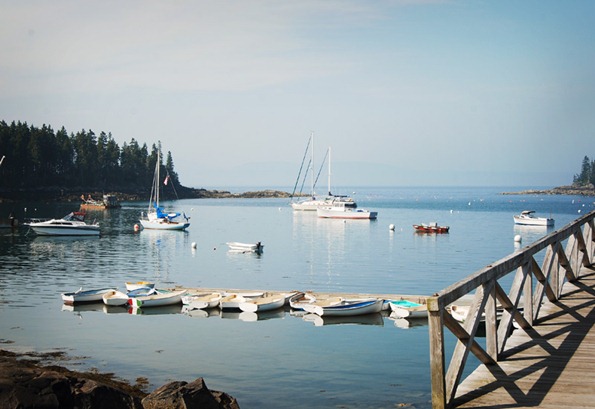 It’s great meeting someone I’ve been in touch with for quite awhile now and who is, in real life, just like she seems on the internet. So sweet. 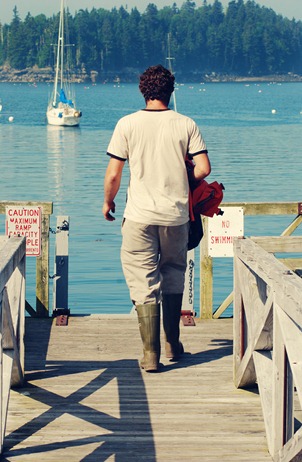 I couldn’t help posting this last photo of a young lobsterman who passed us while we were standing on the dock as he was heading down to his skiff.

We missed you, Mike!

How neat to meet someone you met via the blogging world!

what fun to meet a blogging buddy...so far I've never met any of mine...maybe some day...great photos.

So much fun meeting someone you've only known through blogging!

Loved your pictures.. Especially the skiff's..they look like just my size.
It would be so wonderful to meet a bloging buddy.. Glad you had the opportunity and looks like you had a great time together.
Have a Blessed Tiggeriffic Day~! ta ta for now from Iowa:)

I'm so jealous that you met Lili and that she met you...one day I hope to meet you both. Ok, that sounded a little creepy and like a stalker, but you know I'm neither of those things...right?! ;-)

Love the photos, and I think you both look wonderful!

Nice that you two gals could meet up! Love the photo of the two of you and I don't give a hoot what you were wearing. Just nice to see you. :-)

I love the photos Kate. You look wonderful ,and so does Lili ,
Wonderful blog as always.

i love 1. that you got to meet up in person with lili and 2. that you were in your knock around clothes and 3. that you found your boat. i had it there waiting for you and wow, you are good. you could be on a reality game show called find our boat.

You look fine! Besides you were on VACAY.
In MAINE.
Oh, the chowdah!!!! I lust.
Speaking of which, the lobsta boy ain't bad either.

You are such a doll Kate, and you look FABULOUS and I love love love this post and wish you lived nearby. We would have so much fun together! (I'm sure you maybe have a few more shots of that lobsterman, I know I have at least one more.) It's a lot cooler here now, what was I thinking wearing that long sleeved t-shirt on such a HOT day!! xoxo ~Lili

What a beautiful area - so glad you got to meet! I love the first shot.

i LOVe meeting bloggy buds. It's so much fun!

How wonderful it is to be able to make a flesh and blood connection after you already know someone's heart.

And all i could see in that pic was your beautiful smiles!

I love meeting fellow bloggers in real life.....you already know all about each other! I will be attending BlogHer11 next week and am looking forward to meeting even more. Are you going Kate??

You both looked beautiful Kate! So nice to see you. So glad you got to meet each other in person. I've met up with a few internet buddies as well and had such a great time. Happy summer, stay cool in the pool! :)

Love the setting...spent time in Maine in May and could see myself living there. Very quiet and peaceful and your pics captured that well.....

You look so happy and you do not look any less stylish .. trust me, I am a Fashionista and your friend and I'd tell you, you know that. How wonderful it is to meet bloggers we already know, its the best isnt it?

what a fun day!

you make me smile .. love your photos and friendship here ...blessings kate !

I love meeting my blogger friends in person. We're such a great bunch of people, aren't we? *grin*

Love the photos - the little birdhouse and your boat. Very sweet & pretty with the blue seats.

How Fun Kate!! I've met a couple of blogging buddies and it has always been a great time!! Your images - As Always - are Outstanding!!

I think you look cute! It sounds like you had a great time, and that is what counts.

p.s. Dennis Leary killed me with that "there are no happy endings" last night...

Are you kidding me??? I want most of those s prints!

Who wears anything but knock about clothing on vaca! You have the most beautiful complexion, Kate. You and Lili both look great. I'm so glad you got to meet one another. How really nice.

Kinda like that last shot, too--but all of it makes me want to drag out my water colors and give them a go again! But then...with all your beautiful backgrounds and photos, why should I bother! :)

Visiting from lovely
Lili's, who I also
hope to meet FOR REAL
someday : )!! Love
the photos that you
took in Sorrento. You
really have a talent!
xx Suzanne

All of these are beautiful.

A wonderful little post. I'm always curious what you are up to!! :) Love your photos!

Just to share with you folks, i have a new post today on Amish Stories from the Terre Hill days even that was just held in Lancaster Pennsylvania. It was a very hot day but i was able to get i think a few good images from this event. The town is populated with a mix of Amish and old order Mennonites which only adds to its charm. They even have what has become famous in Terre Hill their "outhouse race". The town sits on a hill so it overlooks Lancaster farmland in almost all directions. This is one of my favorite towns to visit because its free from commercialism, so if you are looking for a really all American kind of town with the added bonus of seeing its Amish and Mennonite residents at work and play, then this town is for you. Thanks folks. Richard from Amish Stories.

Hey, I like your 'vacay style'! So glad that you Lil got together. Loving the photos....keep 'em coming! Happy Weekend!

The handmade high swings sound absolutely divine. Shame on you for not taking pics of them! (But bravo for that last pic... too bad the lobsterman doesn't know we are all admiring his bum!)

Oh, and I love the photos of the skiffs -- so simple and beautiful!
xoxo

Someday I hope to meet a blogging friend! You look mahvelous Kate:)