Things that make me smile

It was hot today and when I got home, I filled up the wading pool with nice cold water and jumped right in. It was good.

For dinner, I had a fresh-from-the-garden tomato sandwich with Helmann’s mayonnaise, sea salt and cracked pepper with deviled eggs on the side.

After dinner, I visited Pinterest. This is something I don’t often do because I could get sucked in the vortex and never come up for air, but here’s a few photographs from the photography section that made me smile. 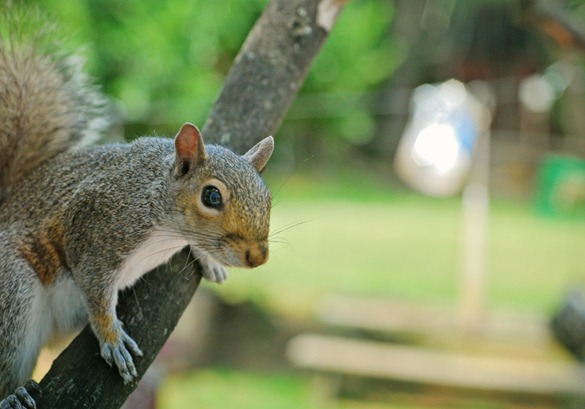 Someone was watching us eating our lunch today. Luckily, the camera was right on the table, and it had the macro lens on it. The little scamp was so intent on watching my husband eat that he let me come right up to him and shoot this through the window.

Then we set George out on him and he dashed away.

Last night, I watched an Ed Burns movie on Netflix. Nice Guy Johnny wasn’t a great film by any stretch of the imagination but it did have several really good things going for it. One was the location. A Long Island native, Burns shot several scenes in The Hamptons. I really enjoyed the soundtrack which introduced me to an artist named PT Walkley, who wrote and performed all of the music in the film.

The premise for the movie: Johnny Rizzo (Matt Bush) is about to trade his dream job in talk radio for some snooze-ville gig that'll pay enough to please his fiancée. Enter Uncle Terry (played by Burns), a rascally womanizer set on turning a weekend in the Hamptons into an eye-opening fling for his nephew. Nice guy Johnny's not interested, of course, but then he meets the lovely Brooke, who challenges Johnny to make the toughest decision of is life. From IMBD

Kerry Bishe plays Brooke, who lights up every scene she’s in. An absolute delight, down to her vintage convertible and her goldenrod wool sweater. You can check out samples of the soundtrack here:


And, if you have a moment, listen to PT Walkley’s rendition of Round Here, written by Counting Crows frontman, Adam Druitz.

And that’s what makes me smile today.

your little squirrel peeper is precious! he made me smile!

I hear you about Pinterest being sucked in! But there are some awesome photos and you captured some here ... love the little girl in the swing!

yes, we can glean joy from a film that "isn't great" but gives us something...

Oh my goodness, Pinterest, how I love thee. I get sucked into the vortex all to often. Do you have an account, Kate?

I would like your hubs to come tend my sorry excuse for a garden.

I would like him to bring you...and one of those tomato sandwiches - my favorite!

and they made ME SMILE TOO!

A pocketful of joys to you,

The pictures are lovely - I've also pinned the hydrangea cupcakes on! Do you have an account there? I'd love to follow your board if you do - I'm at WeeKitchen on Pinterest.

What a cooperative squirrel!
I am not familiar with Pinterest .... do I dare check it out or will I be sucked in never to return ? :)

A lot to smile about! I will check out the song, Counting Crows are pretty much my favorite contemporary band.
That squirrel is one bold brazen article, isn't it?

Hehe, it is always a treat for me to see a squirrel up close! Funny enough, our pet rabbit quite often reminds me one...

Well, if your husband will deny the squirrel a crack at the bird feeders, then I guess you have to expect a little dinner visit once in awhile... :)

Happy to see you happy! xoxo

You're on pinterest? I get on it occasionally and post for about 10 minutes, often looking for wedding ideas, butI don't seem to get obsessed with it. Haha. You found some great photos and my favorite is that one of the hot air balloons!

all nice things to smile about...

lovely photos....are you going to Maine this summer? I talk about Maine via my experiences reading your blog all the time. I must visit for myself. hope you are doing fine...trying to find time for myself to read blogs...read...do nothing....

Come leave a comment on my blog for the Fairy Hobmother! I did and won a $50 Amazon Gift Cert. Seriously.. come comment and leave your wish.

That squirrel is adorable!!!!

The sandwich sounds delicious. I had a protein shake for supper, my usual. Wish I had some fresh tomatoes though. (I miss her too...)
Brenda

where do you find your movies? I put it on my list; I'm all about a not so hot movie making you smile for whatever reason. I watched One Crazy Summer the other night with John Cusak. That is my generation and it made me smile just thinking about high school, John Cusak before he did creepy movies and all the other really fun memories of the day....
you should put "Kinky Boots" on your list. It is not streaming but you can get it in the mail. It'll make you smile (at least I think it will); I think it is a well done movie...

thanks for the smiles today....

Oh! Those cupcakes look so lovely - too good to eat. I shouldn't be admitting this, but I once kept a beautifully decorated cupcake on my counter so long that it actually kind of petrified. It had a Valentine's theme and I would put it away and pull it out every year. *snort* True story. It finally started to look a bit sorry, so I finally had to part with it.

As much as I love the cupcakes, you know my favourite photo is Mr. Squirrel. *grin*

Not much time for visiting blogs, much less watching movies these days. I'm looking forward to getting caught up both, soon.

Love the images! I will have to check this site out.... Those cupcakes look to die for!

Your blog certainly qualifies as something that makes me smile. Thank you for taking the time to share.

O my land, eat an extra sandwich for me will ya! I love fresh tomato sandwiches. I'm going to have to go to the farmers market tomorrow. You've got me wanting some tomatoes.

Love the chosen images. They make me smile too!!!

All of the above made me smile too! And seeing that squirrel eyeing you at lunchtime made me bust out laughing. I think he's staring down the one that makes life difficult for him. And I wasn't talking about George! xo ~Lili