I believe I mentioned that I got a new phone this week. And I believe I told you that it does everything but take out the trash. At school the other day, when one of my co-workers asked me what my favorite feature about my Droid was, I had to admit it was the camera.

One of the first free apps I downloaded was listed in the photography category. It’s called Retro Camera and the app comes with 6 different old-school camera styles.

I’ve been taking pictures throughout the day using the phone ever since I figured out how to upload them into my computer. The images here are untouched with the exception of two, which were lightened a bit.

The day began with my husband packing up the car with the recyclables and asking me to take them to the dump. As my reward, I took myself to McDonald’s for breakfast. 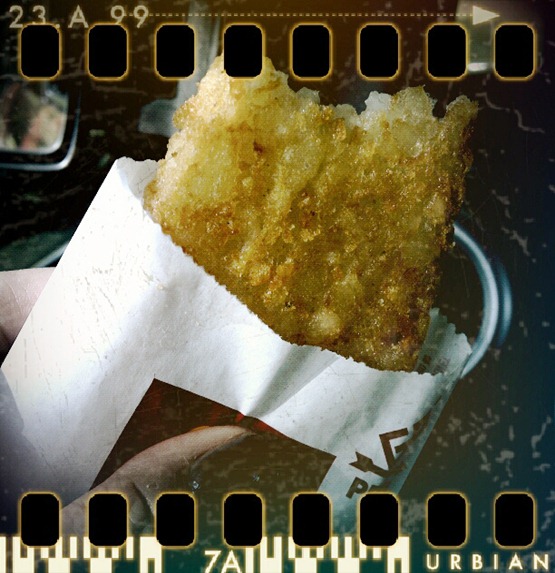 I swear to you that I rarely ever do this. But I don’t know what’s gotten into me lately.

Damn, hash browns are good when they’re cooked right. Crispy on the outside and soft on the inside. 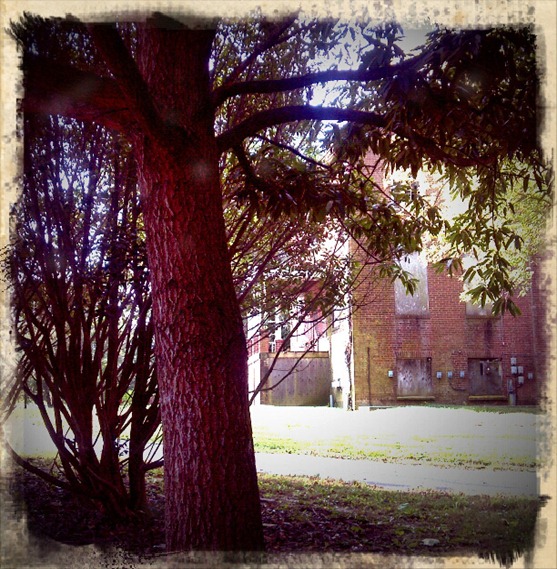 I parked here and ate, then headed home. 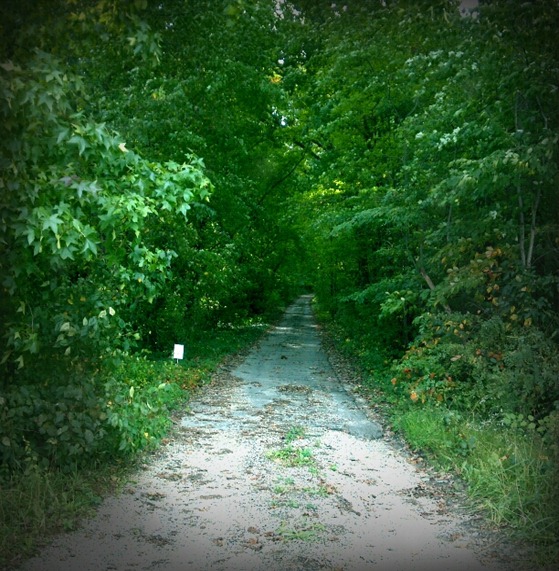 The entrance to our driveway. 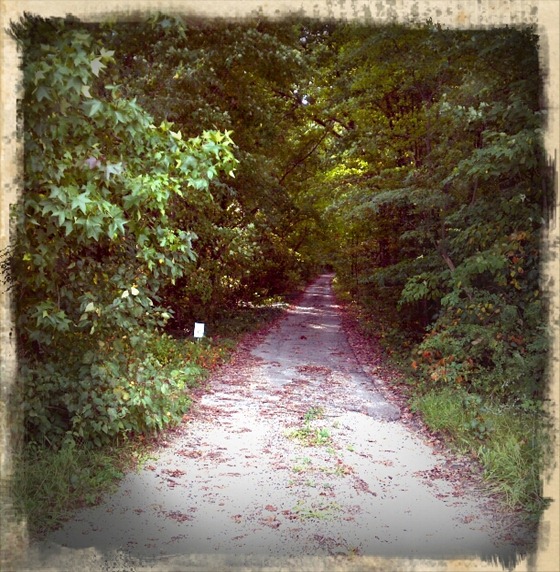 
Exciting, isn’t it? You still awake?


My husband came home with this the other day: 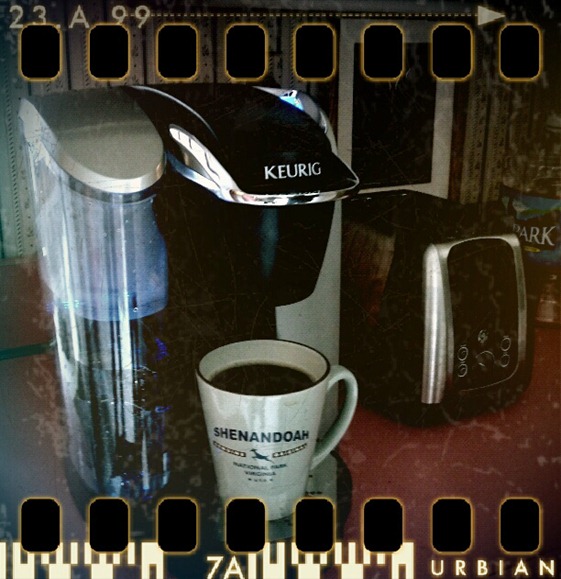 He said it was a gift for me.

I drank enough this morning to get all my chores done and then did some more. When I was done, I took a picture of the foyer. 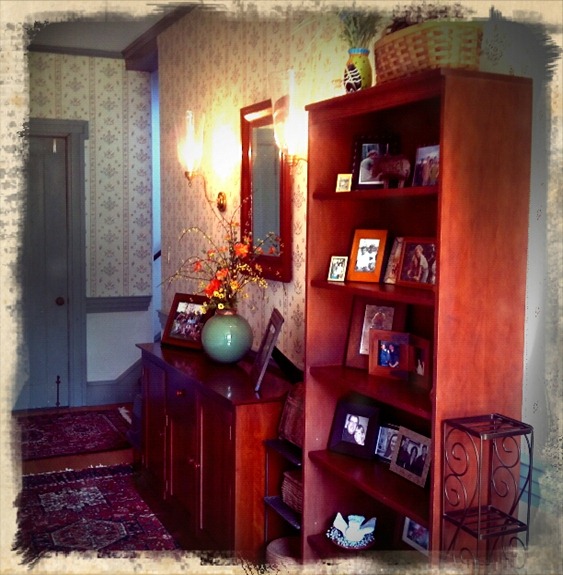 I even cleaned the front door. This old door has seen better days and was really dirty on the side that faces out. I’ve decided to paint it and clean the brass knocker, a chore I’ll tackle soon. 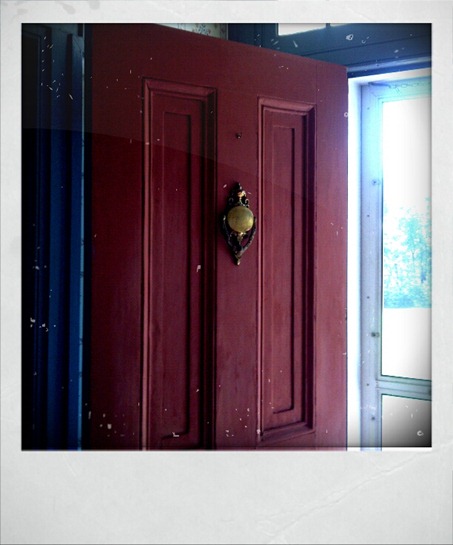 Then I went out to get vacuum cleaner bags. 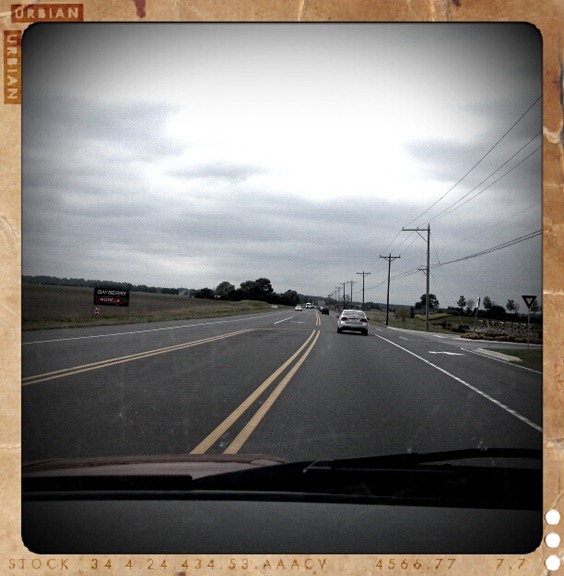 The search was fruitless, however. The Lowe’s where I bought the crappy little vacuum 4 years ago doesn’t sell them anymore, so they don’t carry the bags. Some day, I’m going to have the vacuum of my dreams and it will be a Miele Neptune Canister.


At least I know what I want.


On the drive home, sad songs were playing on my CD and I didn’t change them, which turned out to be a dumb move. 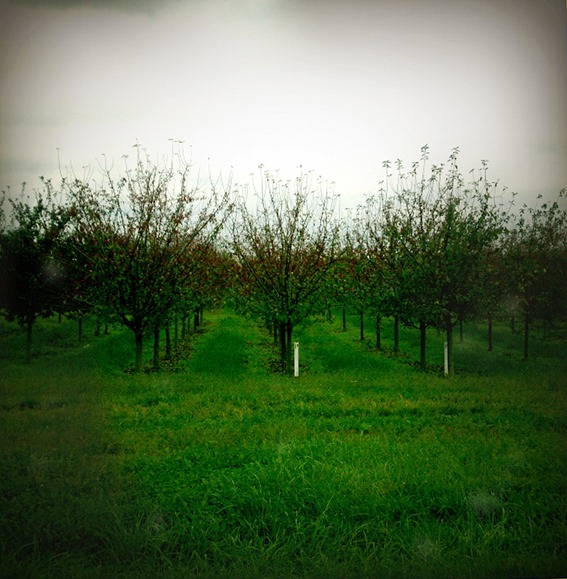 I passed the nursery across from where we used to live at the horse farm and thought the sky looked pretty enough to take a picture. 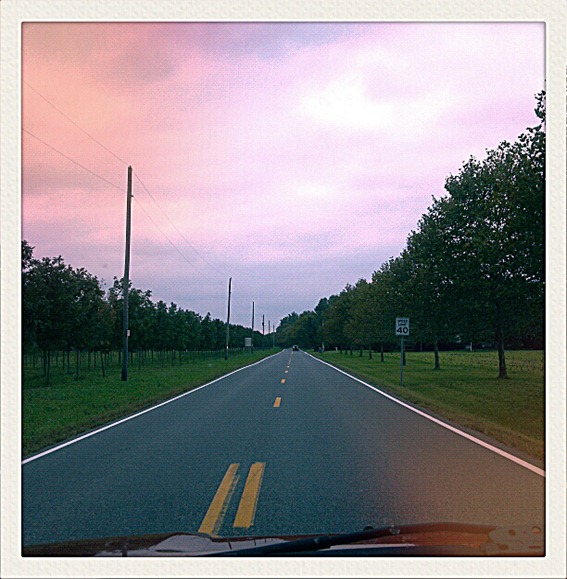 Don’t worry. There were no other cars on the road. 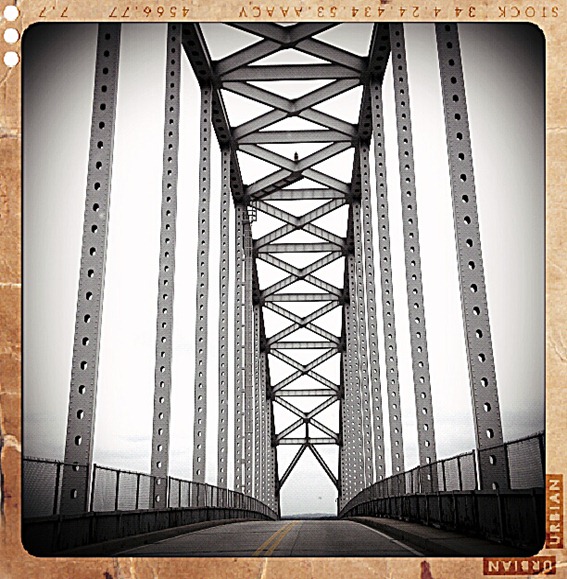 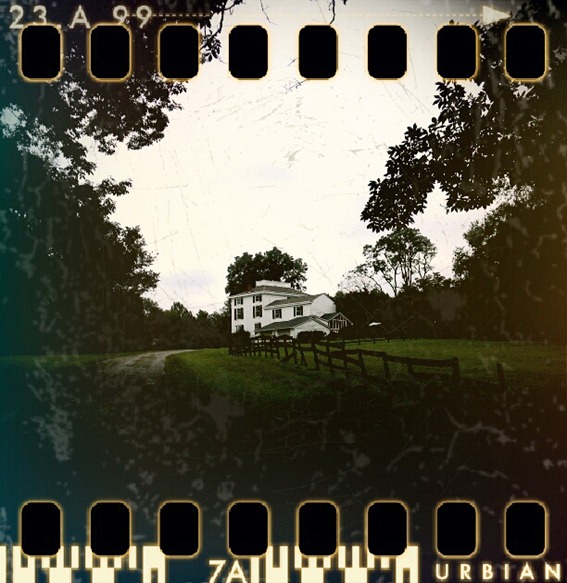 It’s where the heart is. 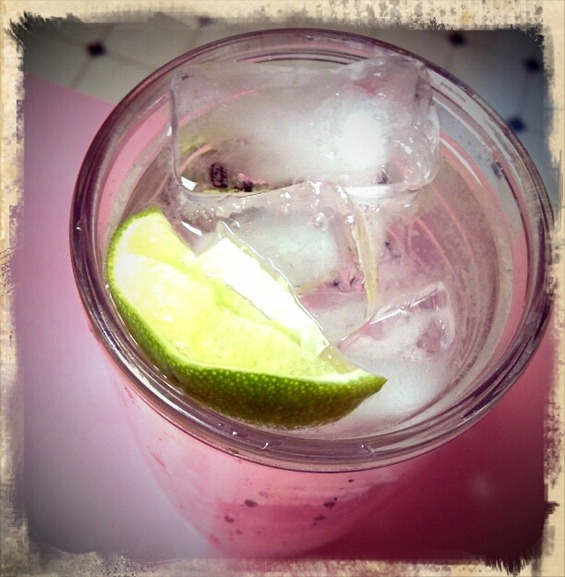 And it's where the cocktails are.


For some really beautiful examples of this camera app, visit my friend Caroline’s blog:

More reasons to love my phone

She has some really cool shots over there. Have a beautiful weekend, all ~

I just have one question...do you like your phone?

Here in the land of the unimproved phone, I had no idea they had apps for that! Shoulda known....

And BTW, I got myself one of those Mieles when my 40-something Compact died. And it IS the vacuum cleaner of my dreams!

Fun to see the phone photo apps! Enjoy the Keurig....I bought my college daughter one last Christmas and she left it here with me over the summer while she was on an internship. I loved the coffee it made and was sad to part with it this fall. Did you get the filter with it so you can use your own coffee? That works well and is less expensive than buying the K-cups (but, they make delicious coffee, I'll admit!).

I can't believe those pictures were shot with a cell phone. INCREDIBLE. You're almost convincing me to step foot into the 19th century and upgrade my phone. I wonder what the difference is between what you have, and, say, the i-phone, which everyone tells me I should just suck up and get. That's a question for my teenaged son, I suppose.

Sounds like you had a productive day and enjoyed some good coffee and a little decadence at McDonalds. You have to take time for yourself in this crazy, frenetic world. You deserve a nicely cooked hash brown, at the very least.

Enjoy the remains of the weekend.

Great pictures, Kate. I like the "cocktail" idea a lot!
xoxo
Donna

I have an iPod Touch and have become addicted to the camera+ app. Lots of fun.

Very fun shots... maybe you went for the hash browns due to colder weather. I ate at McDonalds yesterday when out shopping, and that's something I never do either. But their french fries for some reason just called my name.

I want that vacuum cleaner to but everytime one breaks or wears out my husband buys another piece of junk. I could scream!

WOW, just spent an arm and a leg on a Canon Rebel when I coulda hadda Droid!!!!

Wow you were either wound up on coffee or you really really love your Droid. Or both? haha enjoyed it all Kate! We have one of those Keurig's too, but it's the 1 cup version. A cocktail sounds nice at the end of the day, plus it is a Saturday night. Your foyer is gleaming! xo ~Lili

OK, this is the third comment I have left, and maybe they will all show up. If they do, I apologize. I bought a Miele canister for my husband last year....he loves it.

Dang...who knew I had been wasting the capabilities of my Droid all this time?! I love these, and now I'm off to check out Caroline's blog!

I also have a Droid by Samsung and really like it, although I don't use the camera too much. I'm thinking that Keurig might be a nice idea for us next time we need a coffee maker. And vacuums? I used to have a Miele but now I have a Dyson Animal and really really like it.

Now I'm wishing I had some hash browns.

It becomes an illness, Kate. I have so many photo apps it's mind boggling! Enjoy your new phone/mini computer!!!

Way awesome....I never think to take pictures with my phone. Thanks for the reminder (I think your quality is really good too!).

AWESOME!!! OK...beware of the addiction that will take over. Sorry I didn't email you back...been crazed this weekend and it looks like you solved the problem. BTW...that bridge shot should be framed! So flipping cool! Thank's for the link love my dear! Happy Sunday!

I loved those photos and all the effects - how technology gets us in!! As for the vacuum cleaner I was forced to buy a new one a while back & I bought a Nilfisk. Great choice - I said to the salesman when I bought it that it would see me out. He looked non-plussed... does he really think I'll be buying another vac when I am 80!! No way.

Love the randomness (and quality) of your day's photostory. Awesome apps. I SO don't need a reason to take more pics.

BTW I need some opinion at my place. Everyone is invited!
:-)
BB

This post today feels as if you have taken all of us along for the ride as you go through a very ordinary day. It was wonderful!

You have just pushed me to the tipping point, and I now have new resolve to retire my beloved red Razor phone in favor of an iPhone (AT&T customer, you know). I've avoided it as long as I think I can, and my husband is getting insistent (he and our daughters have iPhones and love them) and I have resisted. Resistance is futile, as they say, and I think I'll make the leap ... perhaps today is the day.

Have a great Sunday!

Oh Kate I immediately reached over and had to add ANOTHER app-free of course!~ to my phone!! Save your pennies for that Miele-it's worth it!!~~Rain :)

Cool! I am going to have to look for that app in my phone! Looks like a lot of fun!

Thanks for taking me on the ride. My day usually ends with a cocktail too.

I miss your daily posts. But as usual, pics are gorgeous.

Love the pix you've taken of the moments in your day from your phone. Wonderful effect!!!

I feel as though I spent the day with you, Kate!

Love the hues in the drink shot.

You are seriously convincing me to get a Droid!!! How awesome!
P.S. Give George a hug for me :-)

I love the coffee maker. I have one just like it and was addicted right away. I dont have a phone like this yet everyone does. Maybe I should join in this winter. Lovely photos

HaHa!! Welcome to my world of cameraphone obsession! I now have 22 photography apps and almost 2000 photos on my camera...It is handy and fun:} My favorite apps are Hipstamatic and Instagram...not sure if they are available for droids but if they are look me up on Instagram as gailo_oliag....

I can barely FIND the camera on my phone and here you are downloading cool apps and taking awesome windshield/sky photos! Jealous of your mad skillz.
BTW bite the bullet & get the Miele. Love, love, LOVE mine! This coming from a girl that HATES housework.

Pretty good for a phone. I just use mine for talking.

So when you actually use the phone part of the phone is the reception any good?

There are a lot of fun apps out there ... AND if you want some interesting Keurig pods (coffee AND tea).. let me know ..

I love your blog! Catching up after not reading blogs for a while. I think I'm about to get a new phone, also. Ours were both pre-Rita (we in LA & TX don't have to say Hurricane, we just go by the name). My husband joked that his was kerosene-powered :) Anyway, he wants me to get one like our daughters that has the apps for Weather, GPS, hotels, etc when we travel. I was not into all of the more modern stuff: I-Pods, downloading music, books, etc. And then the library had a training that taught how to download Overdrive and Freetag, and an exhibit of I-Pad 2 (with ability to take photos toward as well as away!) Even in Genealogy we have to know so we can help patrons. And now, I am thinking new smartphone, I-Pad 2, and we need to replace that old VCR player with one connected to a DVD recorder. Nope, I don't think I am staying away from any of the modern stuff!