Dreary days, an old wives’ tale, and hope for some

Oh my gosh – can you believe it? I’m posting two days in row here.  Maybe it’s because I’m just so darn excited to have seen the sunshine this afternoon, and maybe it’s because I just feel like I have something to say.

The sunshine ~ after more than a week of mist and rain and humidity so thick you could slice it and serve it on a plate, the sun burst forth this afternoon. But these are photos taken throughout the week. 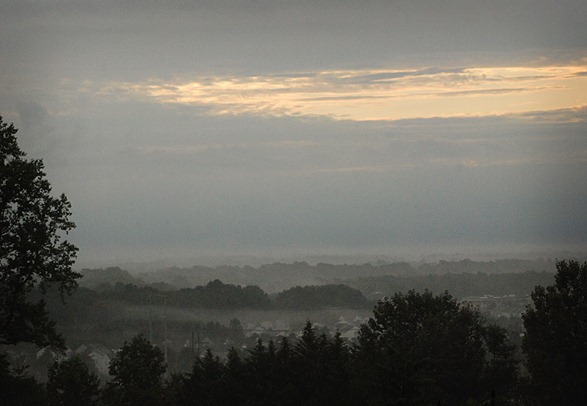 It has been so dreary lately and to top it off, all sorts of things seemed to be going wrong. Fortunately, they’ve turned around and gone right again.

After shelling out a little money. 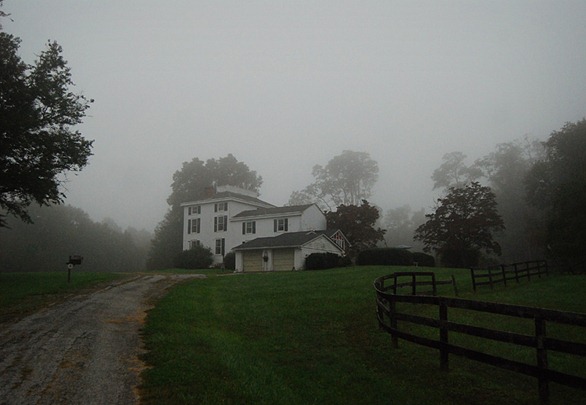 It all started when my left palm started itching earlier this week. I’m not a huge believer in old wives' tales, but more often than not when my left palm itches, I know I’m going to end up shelling out money for something.

It began doing crazy things and not letting me unlock its touch screen. Removing the battery made it work only for about 10 seconds so it was a trip to the Verizon store where I broke down and bought . . . 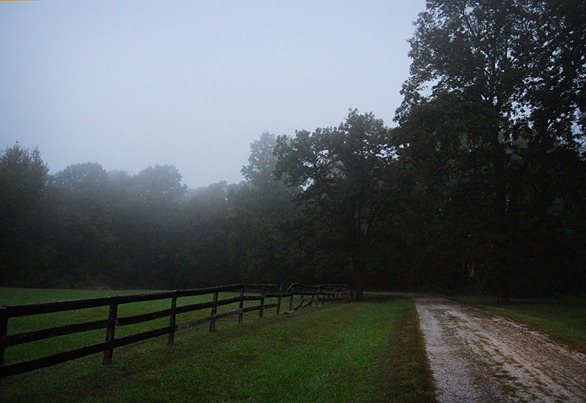 At first I couldn’t figure it out, but I’ve since fallen in love with it. So that was a good thing.

The next day, I dropped the Honda Element off at the dealer for a scheduled evaluation on a couple of noises we’d been hearing lately. To my complete and utter joy (not), I found out that the torque converter needed replacing among several other things to the tune of . . . well, let’s just say it’s going to cost a lot. 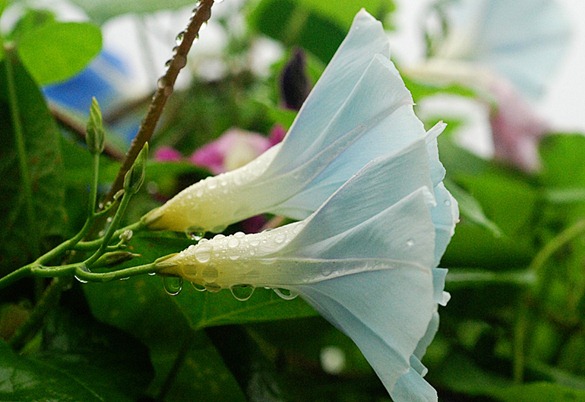 But not as much as a new car would cost. And I’m driving a nice loaner car – a 2011 Acura TL in a rich chocolate brown color with a leather interior the color of butter. It’s a beautiful car and all, but I really miss the ole Element.

Now I’m hoping that my right palm starts to itch because everyone knows that this means money coming in.

Please don’t tell me you’ve never heard of this superstition. 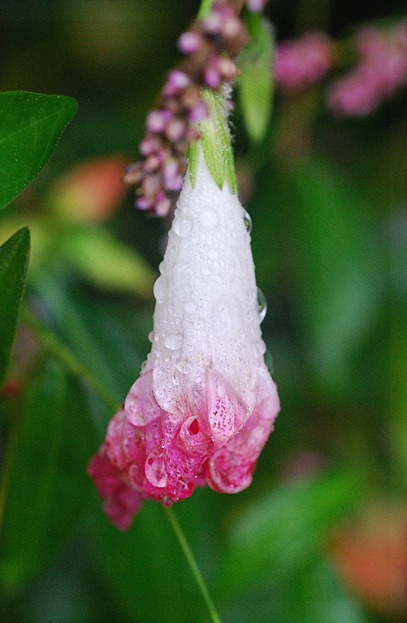 Look how soggy the poor morning glories look. But better days are coming ~ the sun is making an appearance and the dank, moist air has departed.

On the national news tonight on NBC’s ‘Making A Difference’ segment, I heard a story about a food bank in Potland, OR that asks people to step up and not just take hand-outs. I found this really interesting.

Struggling families in the Portland/Vancouver area are getting some help from an organization called Birch Community Services, a food & clothing donation center for the working poor. Families buy a membership at a cost of $50 per month and in exchange for free food are required to take courses in money management and nutrition as well as volunteering regularly at the warehouse.

What a great idea this is.

The program was created by Larry and Suzanne Birch, who believe that people are in the predicament they are sometimes because they just don’t have the tools they need to get by in the world. The poor are taught to be better stewards of what they have and to gain confidence and hope.

The organization began in 1992 when a bag of squished bread was left on the Birch’s doorstep, distributed to two single mothers who were in need of help – and today over 600 families are enrolled in the program. I just love hearing about this sort of thing.

I’m just so chatty this evening, aren’t I? Have a great weekend, all ~

We've had quite few dismal, overcast, icky days here at the beach in Calif., too (although they were interspersed with some great sunny days). I have been amazed at how the weather has helped to determine my moods for the days. On sunny days I am much more motivated to get up early, exercise outside, and extend myself to others. Hmmmmm.

Now I've only heard the palm itching meant money coming in, or an allergy to something(at least that's what my palm does if I take penicillin). Those dewey morning glories in their state of unfurledness (a word?) are so... well, glorious. So good to see two posts in a row AND hear the sunshine is back. xo ~Lili

Sorry about your car, and your phone, but I LOVE my Droid! We had beautiful weather here today, finally out of the rain and humidity. I love the story about the food bank in Portland. You gotta love Portland, they are always on the forefront of coolness and making the world a better place!

We've been having beautiful Autumn weather - sorry about your rain. But it sure made for some GORGEOUS morning glory pics!!

I saw the same news story on the Birch's. It is a remarkable program they have created.
Hoping these grey days are behind us!
Have a great weekend!

we sure could use your rain. Love the pictures of the house. I'm more of an architecture person. Have a good Friday tomorrow. It's red shirt Friday at the university. We wear red shirts that say We support our troops. I'm missing my son right now, I need a day like this. :)

you are a chatty kathy, errr ummm kate tonight :)

and i've heard the old wives tales, but have never experienced it first hand....

but if you want to hear about my itchy palms when i had an allergic reaction to something in my pizza and my face swelled up.....well, no you don't !

You can make even soggy morning glories look exquistie. Now why can't I tell you I've never heard of that old wives' tale?

Wow--that's an awesome story about the Birch Community thing! Love it. Some people don't have the skills to make it--and it gives it to them!
I hope you got my other comment on Josh's pictures, which I loved--cause Blogger doesn't recognize that I HAVE a blog right now apparently. Yes, it's pathetic, no, I don't post much, yeah-it pretty much sucks, --but I checked and it was still there. So who knows. It's been one of those weeks.

By the way--were you up on the widow's walk when you took that first picture? Do you have that many hills around the manor?

Sorry to hear you've been having a rough go of it lately. It always seems to come in waves. I have heard that old wives' tale, but I didn't realize it made a difference which hand was itching.

Love to listen to you chat:) So sorry about your Element but your description of leather seats the color of butter has me mesmerized!

Will we be seeing some iphoneography soon? Have a wonderful weekend if I don't get back here...I have the grands for the weekend:)

Hey there Kate,
I have never heard of the wives tale you told about here, I have never heard of the phone you got, I have never heard of the car you have or that you got to loan...I am in a totally other world then you live in- obviously!! BUT the rain, the mist, the saggy soggy morning glories- THAT I know....that is my world....although, like you- we have been blessed with sunshine the last few days and they say it should last about another week...they are calling it an indian summer...I wonder how Norwegians know about Indian summers??? Hmmm....
Hope you have a super weekend and the sunshines and your right hand itches and your morning glories perk up and smile again :-)))

chatty's good when you know and care about the person!

Love the photos and I'm always in for long chat.

Perhaps soggy, but your photography shows them in vibrant colour and does them more justice than perhaps they do themselves.

I have heard of that old wives tale but I'm never taken it seriously. I'm very superstitious so perhaps I should!

Have a great weekend, CJ xx

You know, it was time to come into the 21st Century and give up that silly little phone .. and the Element .. it schleps you to Maine and back and out to Mississippi and back .. each year so it deserves to get tuned up and road ready ..

You post morning glories to torture me, dont you? Its a good thing I love you.

Terrific post! I love my Droid. My husband's third iPhone just bit the dust. He has to wait a month for a new phone. The tension is almost too much for him. I guess he ignores that left hand itch now and then. I saw that news story last night, too. A great idea! BTW, hope that right palm keeps itching.

I know the weather has been disheartening, but I DO love a good fog picture... ;). I am so happy to see the sun today, though, and temps in the 50's last night were wonderful!

That sounds like a great program in Portland. The hope that education can bring, and the dignity of work, however little, must be uplifting to those who are suffering so much in this economy. xoxo

I hadn't heard that story about itchy palms and I don't know what a droid is but I do know those are beautiful morning glory shots!

lol.. I have not heard those wives tales, honestly.

You are probably not going to believe this either, but I don't know what a droid is. Now I have to go google it. Should I be ashamed? ....

It has been so hot here, mid to upper 90's.. too hot to walk after work. This morning it is 50 and only expected to get into the 80's. your weather sure made for lovely pictures.

I love the Birch's idea.. building knowledge and confidence with the tools to improve their lives... always better than charity.

So has your right palm started yet?

I'd never heard of the itchy palm superstition either, and you know I don't think I've ever had an itchy palm at all!! Left or right! Wonder what that means! :)

You are spot on about the itchy palms...and OH MY I love my Droid.