It’s a three-day weekend for me, and after the hustle and bustle of preparing for a whole new school year with a new Director and a first week back, so busy . . .

I was ready for the time off. And I welcome the month of September. 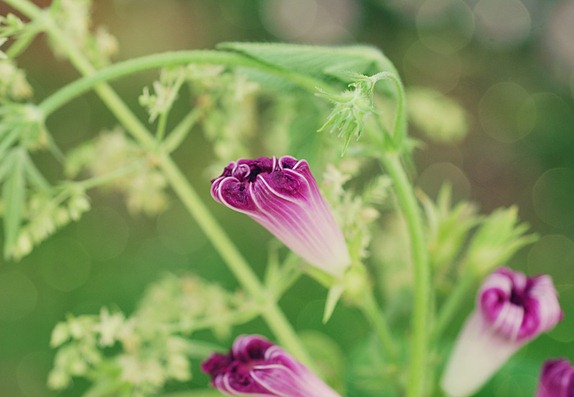 On Saturday, I did chores. And I’m proud to say that I now have a gleaming kitchen floor to show for it. That was my cleaning goal this weekend, although I did much more.

As I sat reading a book under the dogwood tree on Sunday, I realized that the dirt bike family must be away for the weekend, and it was pure bliss because the only things I could hear were the following:

The rustling of the trees in the soft breeze.

The drone of a faraway lawnmower.

The steady cluck of a red-bellied woodpecker, hidden in the branches of the dogwood.

The turn of a page in the book I was reading. 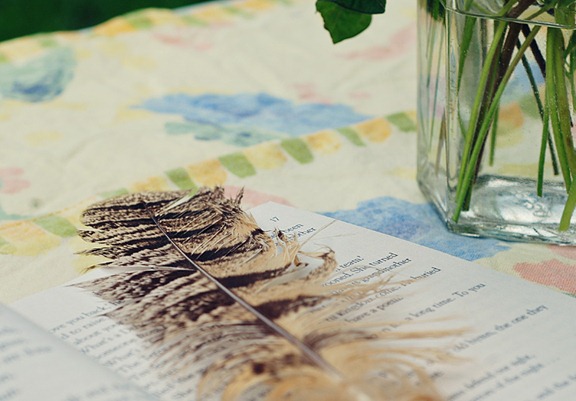 I use feathers as bookmarks. Because I’m such a romantic.

That’s not entirely true. Ok, it’s mostly true but the fact remains that feathers are perfect as bookmarks and Lord knows we have enough of them around here. 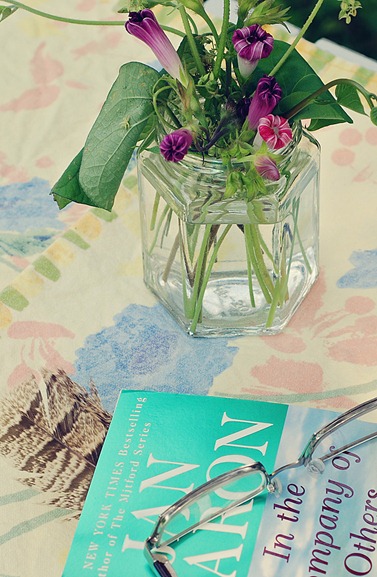 I cut some spent morning glories and some other vines from the garden and put them in this little glass jar I’ve had for years.

It was full of strawberry preserves when I bought it long ago. But you can get some unique jars here: 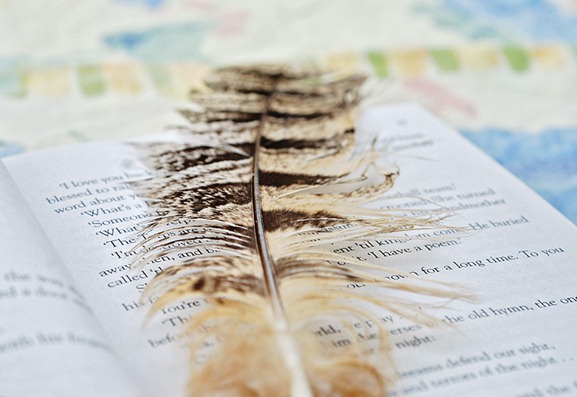 I’m reading a book with Ireland as a backdrop, by Jan Karon called “In the Company of Others”. The scenery is splendid. 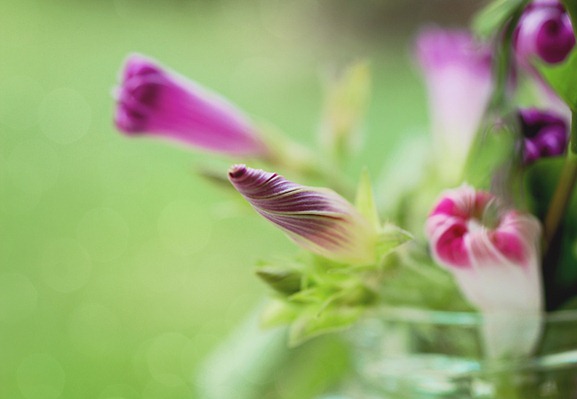 The peace and quiet here is sublime. 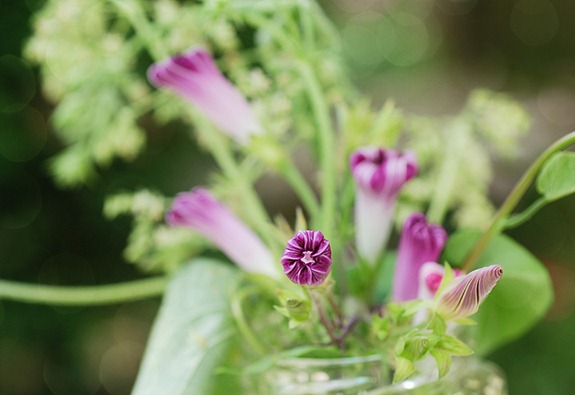 Went to see The Help yesterday afternoon with friends. The book was great, and the movie does it justice for the most part, in my opinion. I cried several times. Emma Stone was fine in her role as Skeeter. But Ron Howard’s daughter, Bryce Dallas Howard, was scathingly perfect as Hilly. The casting of Sissy Spacek as Hilly’s mother was brilliant, but it was Viola Davis and Octavia Spencer as both Aibileen and Minny respectively, who stole the movie.

You is kind. You is smart. You is important.
~Aibileen Clark to little Mae Mobley, in The Help

I'm currently listening to In the Company of Others...and also really enjoyed The Help, though haven't seen the movie.

Hope all goes well with the new Head!!

Oh, Annette - that is so uncanny. I just picked it up today and am at the beginning. Enjoy your weekend ~

Your morning glory photos always make me swoon. So glad you have a quiet weekend to enjoy. I've gotten to enjoy a solo afternoon of quiet as well; so nice!

glad you're having a peaceful weekend. always appreciate you sharing your morning glories.

Relaxing with a book sounds wonderful.

Loved loved loved that book, and hesitate to see the movie because I Loved the book so much. Half way through the first chapter, I fell madly in love with Aibileen. And I can never ever look at chocolate pie the same way again.

that is Ron Howard's daughter... your broad knowledge of music, movies and what not is amazing... Yes, she was really good; she really made you HATE her....

I read the Mitford Series by Karon and loved it. Will check out this one.

Love your slice of life posts as always.... thanks for sharing a bit of yourself with all of us....

Ah, sounds like my kind of weekend. I Loved the book and I was a little scared to see the movie, but I Loved the movie too. They did a very nice job and a super job casting.

Ahh, it cooled off here & we even got some rain (not near enough, but some)!!! Still haven't seen the movie. Wish you were close, I would have gone with you!!

you are a great hostess. always leave here feeling nice :)

So glad you had some peace and quiet to enjoy your holiday weekend. Your morning glories look so lovely in that glass jar. I have a few spare feathers here too for bookmarks, but they're mostly green if you catch my drift. xo ~Lili

Gorgeous photos my dear! I just started reading The Help...OMG...so good! Hope all is well...been missing you! having the worst computer issues at the moment argggggg! xoxo

looking forward to the movie.

I liked the book a lot and in my mind Skeeter was Bryce Dallas Howard .. I havent seen/read much about the cast or the movie so I am surprised .. in my movie (playing in my head as I read) Hilly was a way younger Carrie Fisher ... hey its my movie, I can cast it with anyone at any age .. LOL!

Notice I ignored your morning glories .. clearly you dont have yucky little caterpillers .. OH and the Fairy Hobmother visited me .. and anyone who wants to leave a wish in a comment at my blog might get their wish granted too .. hey I am not above hawking my blog .. hawking .. get it .. HA

you mind if I come over for a while. I would love to sit outside and read a book. it's either too hot or mosquitos. but we take what we can. the temps will be in the 80's this week. I think it's time for a BBQ today. I can't wait to see The Help. Maybe I'll do that today. have a good labor day.

Continue to enjoy the day.

So glad you have some peace and quiet and down time...and no dirt bike noise. Enjoy.

Now, if your dirt bike neighbors are away, that surely is a reason to celebrate, even without a long weekend, right?

I am loving your photos and the serenity they exude. And, bookmarking with a feather, can it get any more romantic than that?

Thought of you yesterday as I was cleaning my bathroom floor... somehow, you have become my floor-scrubbing guru... ;)

My morning glories are finally coming into their own and I will have to see what I can shoot... your images are so beautiful!

Glad to hear that the dirt bikes are silent for the moment. Enjoy!
xoxo

What a wonderful way to spend a holiday weekend. Wonderful.

And your beautiful photos perfectly compliment the quiet and serenity. The feather and book are just exquisite!

(p. s. the DOF on the macaron shots is courtesy of our fave, the 60mm macro.)

So glad you were able to have some peace and quiet this weekend. It looks like you savored it.

I loved the Help....made me cry also...I love that you use a feather as a book mark...what an awesome idea...

I loved the book...and loved the movie as well. I cried. Then remembered...history. I remember the 60's growing up in the 50's & 60's and I must have lived a very sheltered life. Life was so different in the West. Yes, everyone NEEDS to see the movie and READ the book.

When the Mitford books came out in the 90's, many friends kept telling me I must read them. You might say I take my time. What is it? 2011? I started on these in late July. Anyway, I am now on the fifth book. I listen to them on my trips to and from school. What a marvelous cast of Southern darlings, scoundrels, lovable rustics, and plain old good folks!
I am looking forward to the follow up books.....I think your book is one of those....I have the cookbook now....and it is great fun!
Did you know that the actress Octavia Spencer who plays Minny Jackson was actually a friend of the author Kathryn Stockett? They met in 2002. Stockett says that Octavia was the inspiration for the character. I also love that Octavia is an Auburn grad, and Stockett hails from the U of A! What an alliance! And what an important story!

I too love the feather and the book but all images are just beautiful Kate.

Oh I know I'm so far behind on commenting, but I've been doing nothing but packing lately!
I did want to say though that this was a beautiful post. The photos, the flowers and the lovely calming words.... thanks! It was a great way to start my day.
Grace

I'm so sore from all the cleaning I did on my week off.