The whole world smiles with you

I have had a lovely weekend – one which centered around the wedding of my niece, Emily. She and the groom put on a really cool Philadelphia-themed affair that was held at the historic German Society of Pennsylvania on Spring Garden Street.

Most of the family stayed in hotels in Center City. We drove back and forth from Maryland because it was only an hour away. 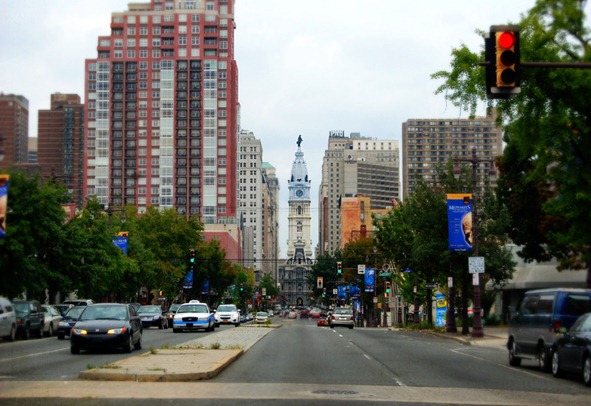 Broad Street looking towards City Hall in the center. That’s William Penn that you can see there at the top of the building and until 1987, a gentleman’s agreement stated that the Art Commission would approve no building taller than the statue. 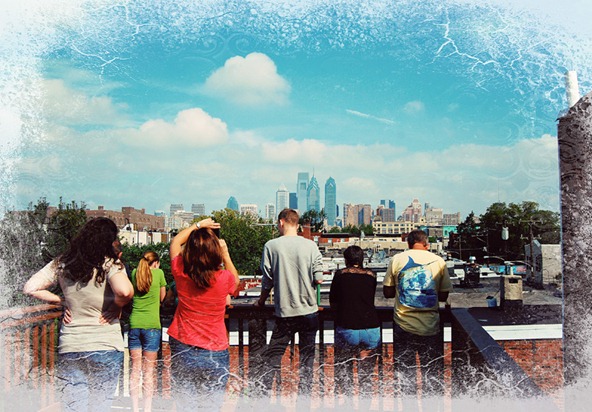 This is what the skyline of Philadelphia looks like today. I took this photo Sunday morning at the bride & groom’s new digs. I love their new house and the rooftop deck. I don’t want to share my personal family photos here but I will tell you that in all the years I have been going to weddings (and that would be many), this was the best I have ever attended. From the vows that left guests asking for copies, to the toasts and affirmations of love from good friends and family, to the complete and utter surprises – it has left an indelible mark on my life.

My niece, the younger sister of the bride, stood up to speak after the sister of the groom had just given a heart-felt, eloquent tribute to her big brother and his new wife. But instead of speaking, my niece took out a ukulele and proceeded to sing a tender but amusing little song she had written in honor of the bride & groom.

It brought the house down and left grown men in tears.

I kid you not. 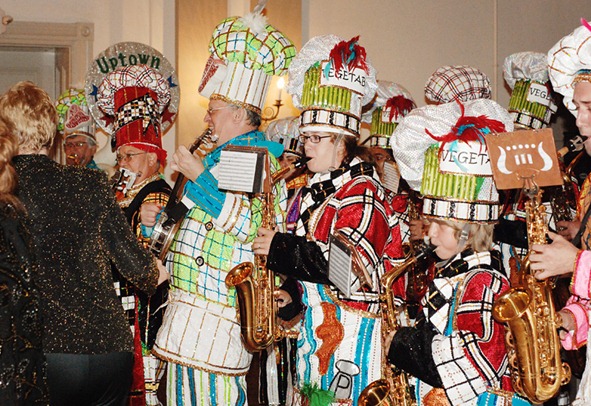 And about an hour later, this brought the house down again.

The Mummers came to the reception to perform! 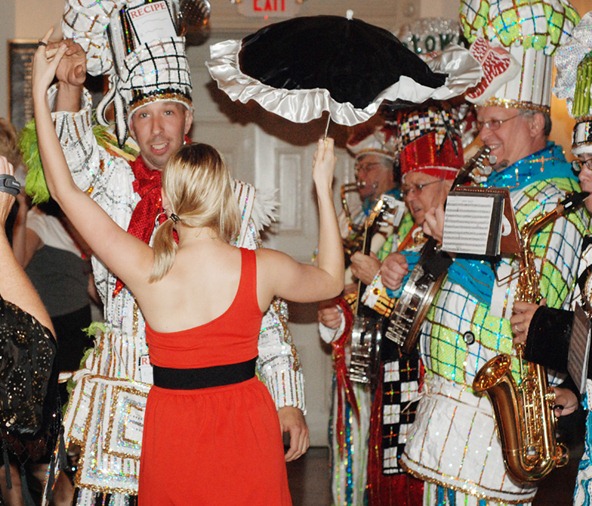 The Uptown String Band came and performed and their act was so much fun. And if you’ve never heard of The Mummers, it’s a huge Philadelphia tradition. Just to give you an idea of how they sounded, this is one of the songs they played (although it’s done by another band). 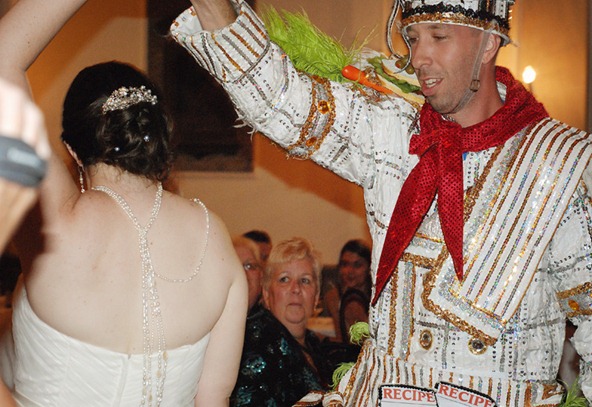 Please note the bride’s jewelry. It was created by Colleen Lehr, her high school art teacher and family friend. But I believe it was designed by my niece. It was absolutely stunning.

And then there was even more dancing. 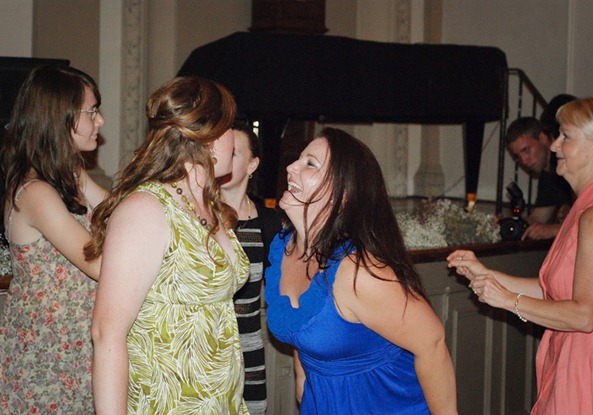 These are three of my nieces, and Danielle (in the blue) is a wild woman. She can dance the pants off a kangaroo.

The extra touches, like the Philly pretzels and home-brewed beer at the bar downstairs and the gorgeous hand-made accoutrements prepared by the bride made this a wedding that I’ll never forget. 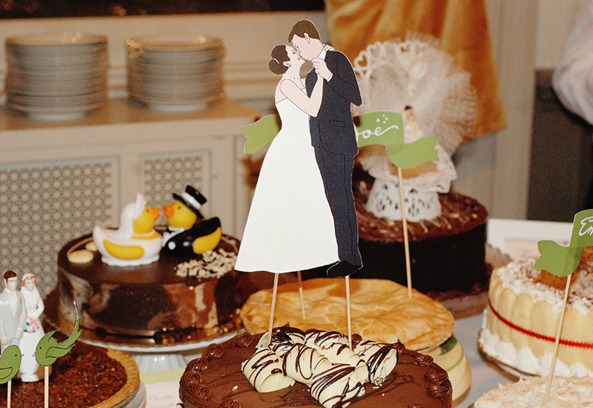 Each one had a topper and this is the spitting image of the happy couple. How fun!

One more thing before I sign off ~ I just want to say that I know you’re used to me posting each and every week day. My life is just too overwhelming sometimes and this is working for me. Thanks for understanding and for sticking around now that I’m just down to a few posts a week.

Glad to hear you're OK and that you had a great time at this very special wedding. Love the attention to detail and the solid sense of humor that flows from the photos!

Good luck dealing with life's overwhelming-ness. We've all been there... or are *still* in there! :)

Love it when you post not matter how often or not that you have the time to do it and I always so enjoy your photos. The wedding looked like a wonderful time and the desserts - oy vey I just had a sugar rush looking at them. Will always be a reader and follower when ever you have the time to post!!

That skyline is NOT the city I grew up in.

You made me nostalgic. The ukulele sings of Hawaii though - just for me I assume :-)

Your followers will always remain loyal because your posts are just so darn much fun to read, and you post some great photos. Sounds like a "lollapalooa" of a wedding--best wishes to the bride and groom. Blogging should be fun and when it gets to be a chore, "step back" so that you can enjoy it when you do post. Take care. Mickie :)

OK, maybe I don't get out much, but "dance the pants off a kangaroo" is flat out hilarious.

Thank you for this glimpse into your weekend, which was far more exciting than I'll ever see any time soon.

My new goal in life is to dance the pants off a kangaroo.

Wow--sounds like one heck of a wedding! Isn't it nice to get out sometimes? (I wouldn't know.)

Overwhelming--it can mean so many different things to different people....but I understand how it feels. I don't like it--but I know.

What a wonderful wedding! So glad you had this chance to be with your family and have so much fun. As for your posting frequency, I will always be happy to read your posts, look at your photos and hear what you are thinking about. I am in a similar place--trying to find balance among all the things I have to and want to do in a day. Post when you can. That's best. xo

I never heard of the Mummers before...what fun! Pretzels, and beer, and dancing! The bits of the wedding you show us are just so full of joy!

Real life should always come before online life...Just don't start posting as little as I do:)

Aw, it sounds like such a fun wedding! I look forward to my niece's and nephews getting married, but we have quite a few years to go yet...

I love seeing your photos and reading your thoughts whenever you have time to share them, so thank you!
xoxo

After my recent wedding, I enjoy them so much more. Sounds weird, I know. Maybe because I'm so happy. :o))

Love that you had a good weekend.....we all need that sometimes, eh?
And blogging less frequently is a subject that has been on my mind, too.
I hear ya.

Check your pedigree. I believe we may be related!

What great ideas. Thanks for sharing your photos.

Looks to be a lovely wedding - they all look so happy. Nice to see the venue too - I was in that city a couple of years ago and thought it was a lovely place,

I think Danielle looks like you except I am guessing she straightened her hair .. those dance the pants of a kangaroo seems to run in the family! And who is that lady with the face in the jewelry photo? Did she get a lemon flavored drink? And I spied Matt in the rooftop shot! Yeah for me.

Those mummers sure are colorful!

I grew up right outside of Philadelphia and I've been doing the Mummers strut since I was a baby. Love. Love the Mummers Day parade!

what a fun wedding! The cakes look delicious.

Now that does sound like it was a very memorable wedding, all those special touches must have been so delightful to experience. And their new place with that view...awesome! So glad you had a great weekend Kate. xo ~Lili

Now THAT was a sharp learning curve... if ever I get back to the US I might have to add Philadelphia to the itinerary!
:-)
BB
PS Loving your blue niece - she looks like FUN!!!

I am late to the party here ... but what an awesome wedding with the Mummers! Your niece is so cool to have them included!
Sounds like such a great wedding! So glad you had the best time!

Wow, now I am seriously craving a piece of cake...

It looks like the whole thing was great fun, so glad you enjoyed yourself!

Kate looks and sounds like you had a wonderful time. Your the same as I and wont post family photos.
Lovely thoughts and photos.

How very cool. I love it when a wedding feels personal, and is a perfect reflection of the couple getting married. So glad you had such a wonderful time and created so many great memories! Thanks for sharing it all with us! And whenever you post I will read what you write and gaze upon your beautiful photos!

and from these photos and your words, both private and public, i can feel what this wedding meant to you !

What a fun a love-filled weekend! Thank you so much for sharing such a special event.

And about your blogging schedule, I cut down to once a week at the beginning of the year, so I understand. But, of course, I just started up an additional blog, ha ha, so there goes any extra time. :)

It sounds FABULOUS and FUN!

Did you get my message? Actually it was messin' with me....

This wedding sounds like it was a dream. What creative and loving minds it must have taken to come up with this plan. What a touching "toast" your niece gave. That had to be so incredible. I hope there's video of this wedding. Your family will enjoy that for many years to come.